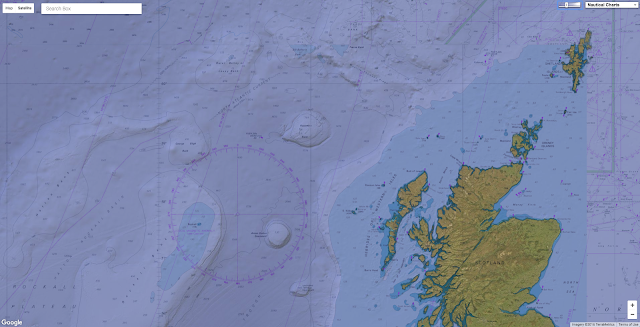 Life is thriving on the UK's tallest underwater mountains, an expedition has revealed.

Scientists used robotic submersibles to dive more than 2,000m beneath the waves to explore four seamounts off the west coast of Scotland.

The footage revealed vast coral reefs, and an array of crustaceans and fish living in the cold, dark waters.
The team also collected thousands of samples, and believe many species may be new to science.
Dr Kerry Howell, a deep sea biologist at Plymouth University, told BBC News: "Lots of people think of the deep sea as being a sort of desert of mud.
"And in fact these mountain structures are far from that - [there are] so many animals, so much life." 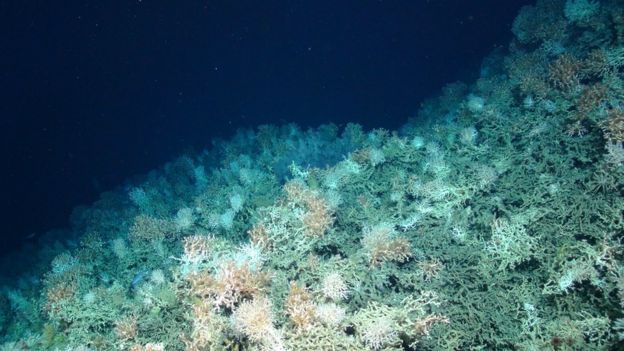 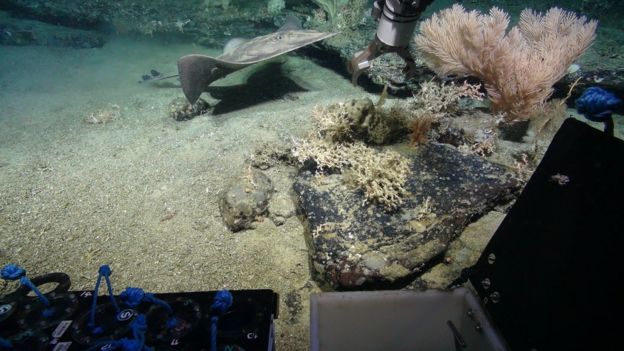 The Deep Links project team, a collaboration between Plymouth University, the University of Oxford, the Joint Nature Conservation Committee and the British Geological Survey, spent six weeks at sea onboard the RSS James Cook.
Of the four underwater mountains they explored, the biggest - the Anton Dohrn - stands at 1,700m tall. It would dwarf Ben Nevis, which has a peak of 1,344m - yet it is totally submerged.
The scientists say until now these unique habitats have been little explored. 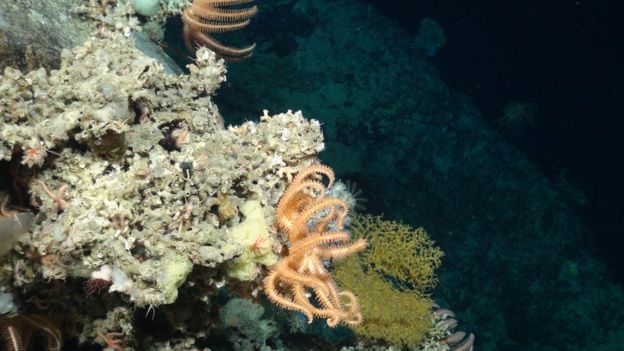 Dr Howell explained: "We don't know very much about the underwater mountains off the coast of the UK.
We went there initially in 2005, and that was the first time anyone had taken cameras there. But the footage wasn't great and technology has moved on since then.
"So this time we were able to take really sophisticated robots there with HD film, and get really fantastic quality images."


The team mapped the Anton Dohrn - at 1,700m, the UK's tallest mountain
The seamount is about 45 km wide and is a former volcano that was last active around 40-70 million years ago.
Its summit has since been eroded by waves to give the seamount a flat, fairly uniform top.
Steep slopes extend down the side of the seamount to a moat at around 2400 m deep.
This short video shows you just what the seamount looks like underwater.
Image copyright Deep Links 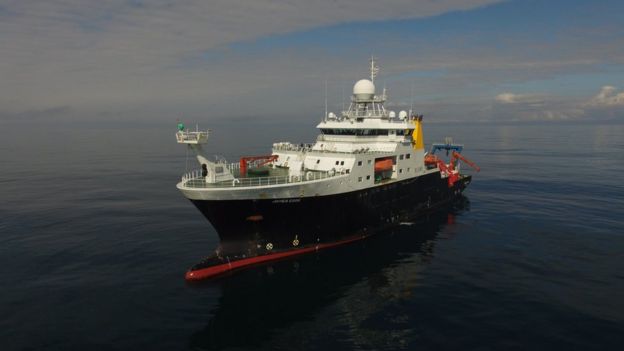 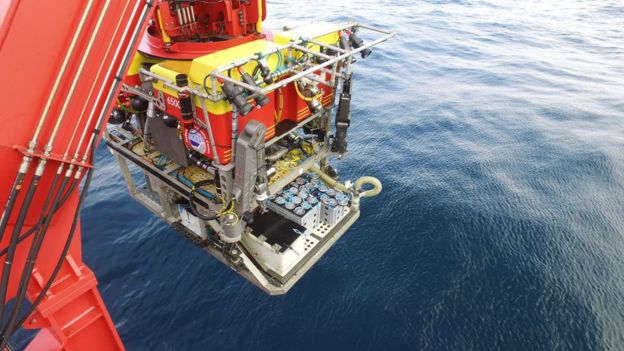 The scientists were able to control the Isis Remotely Operated Vehicle (ROV) from the deck of the ship, to record video, take photos and scoop up samples as it explored the deep.
They also deployed Autosub 6000, an autonomous robot, to map the mountains.
"You see the sea floor coming out of the gloom, and you don't know what you are going to find," said Dr Michelle Taylor, a deep sea biologist from the University of Oxford.
"This is the first time that anybody has seen this sea mount, has seen the animals that live on this seamount, how they live, what they live on, who lives with them - and that's really exciting." 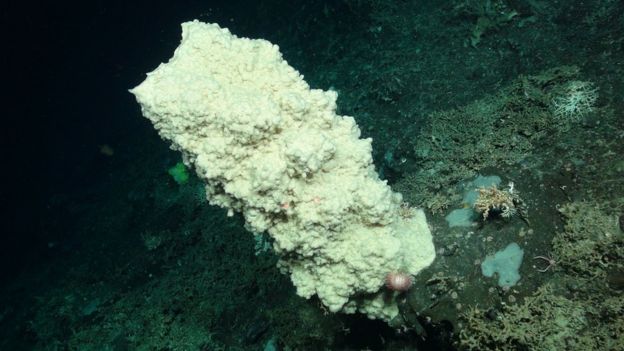 The team found brightly coloured cold-water coral reefs that stretched for many kilometres.
Some of the species were several metres high, while others were thought to be thousands of years old.
They discovered huge sponge gardens crammed with tiny animals, crustaceans, including deep-sea crabs and shrimps, basket stars, sea anemones, and many fish species, including lepidions and chimaeras, which are related to sharks.
It will take the team many months to analyse all of the footage and carefully examine the specimens they collected.
Even at this stage, they expect there could be many species new to science.

The team found that overall the seamounts were in good condition, with most designated as Marine Protected Areas.
However, the scientists still found signs of human impact, including litter and trawl marks, and they are concerned about how climate change may affect these habitats in the future.
Dr Taylor said: "It's very important to understand what lives in these locations because they might change - and they might change forever." 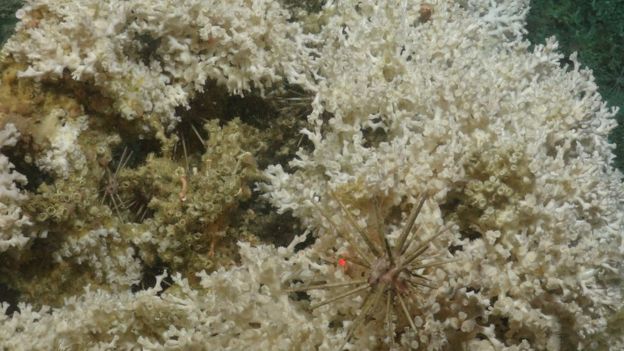 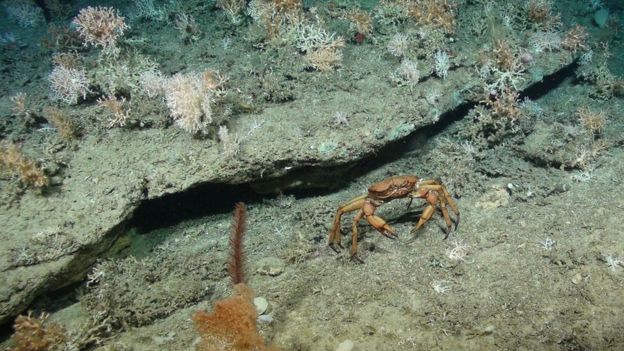 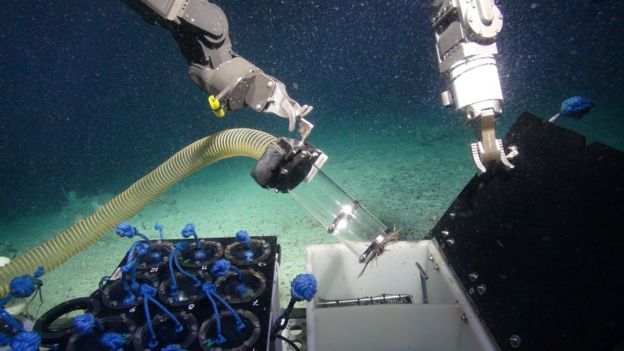 Dr Howell added that the reefs were among the best she had ever seen.
"These mountains are British, they are in British waters - and they support such an amazing diversity of life," she told the BBC.
"And the fact the UK has its own coral reefs, people don't appreciate that.
"These reefs are enormous and in really great condition - [they are] so beautiful, so important - and I really hope that people can appreciate what they have on their doorstep."