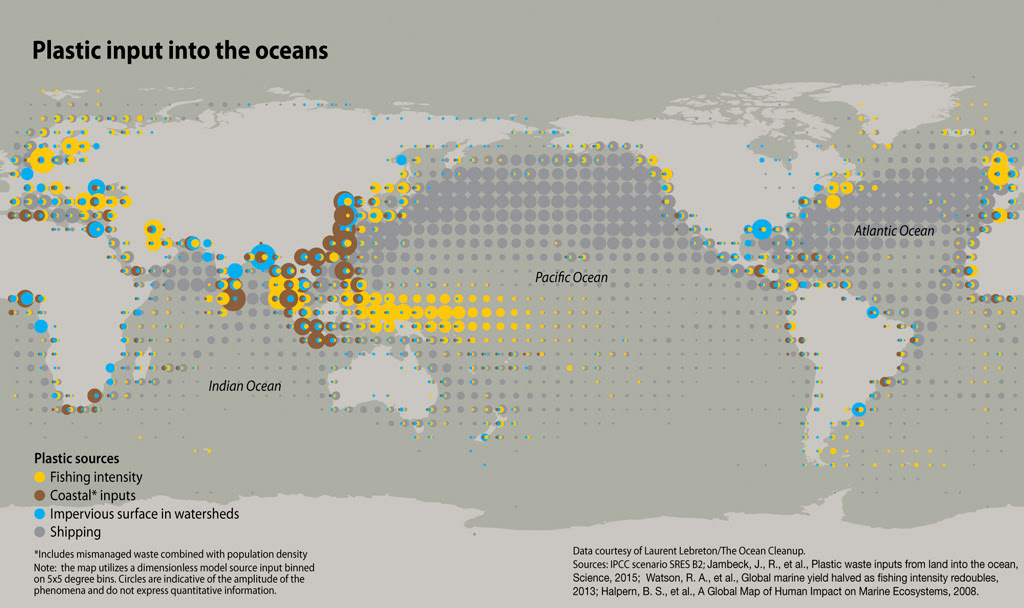 One of the major challenges of addressing plastic pollution in the world’s oceans is the fact that sources of entry are multiple and widespread.
Graphic by GRID-Arendal and Maphoto/Riccardo Pravettoni

From ENSIA by Todd Reubold

The world’s oceans are awash in plastic pollution, and as these maps and charts show, the situation is poised to worsen unless drastic changes take place. 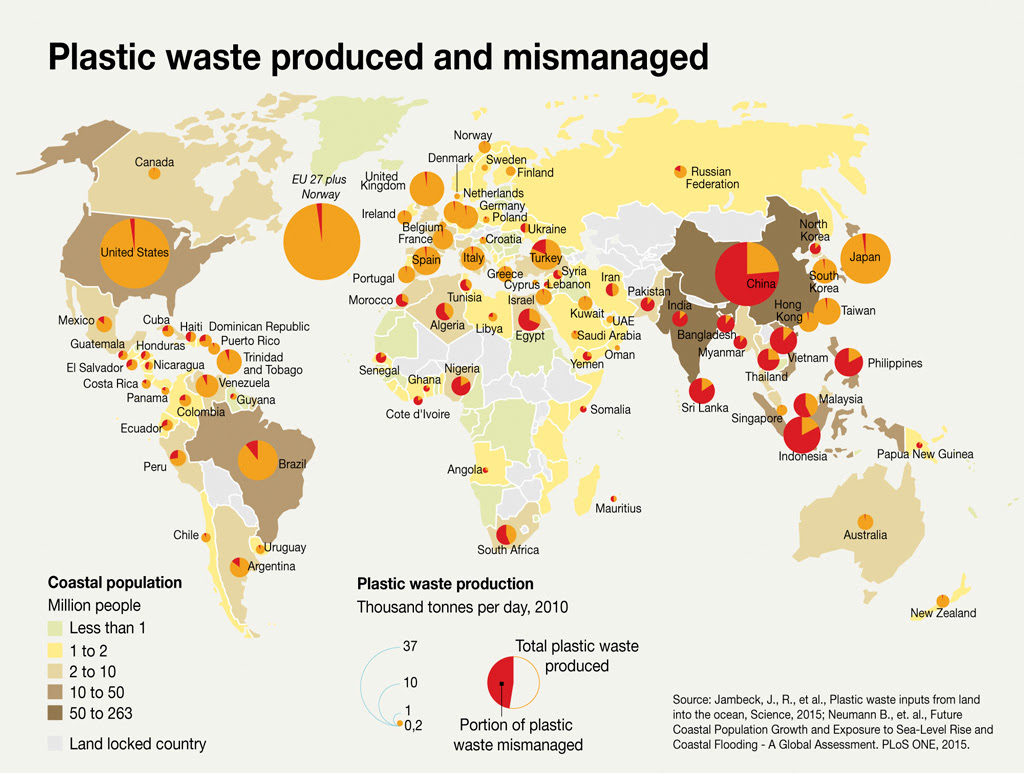 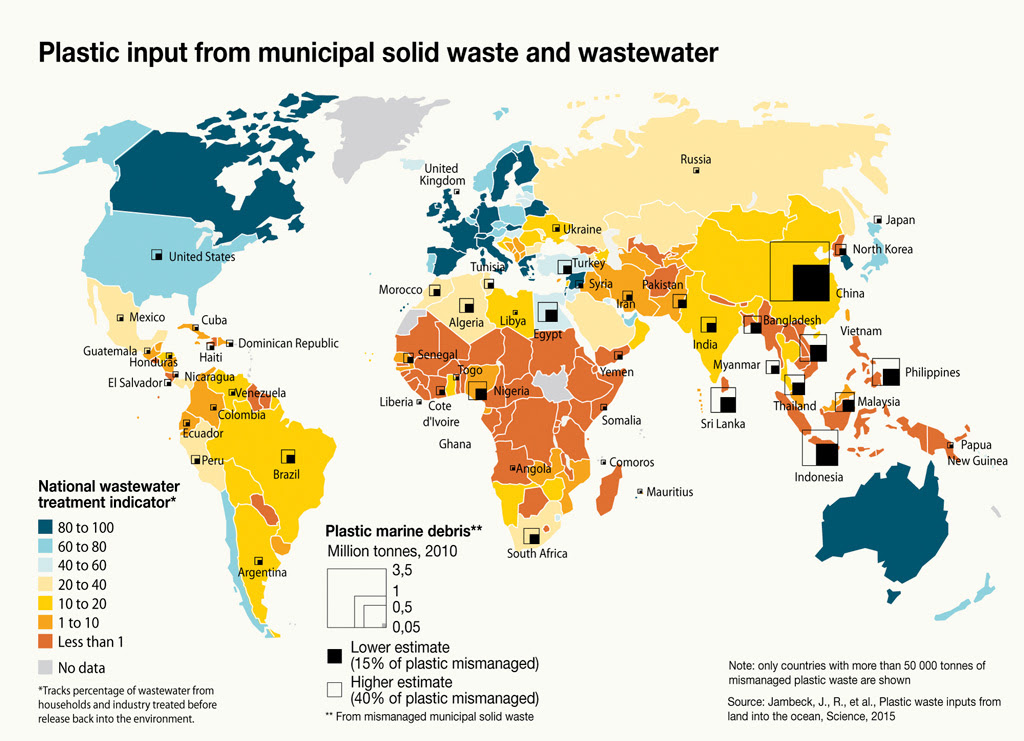 Capturing Plastic at the Source
Not surprisingly, countries with limited wastewater treatment and municipal solid waste facilities often see larger amounts of plastic debris entering the ocean from their shores.
Over the coming decades global plastic production is slated to increase nearly sixfold, and collection and recycling systems in many parts of the world already are struggling to keep up with the proliferation of plastic products and associated waste. 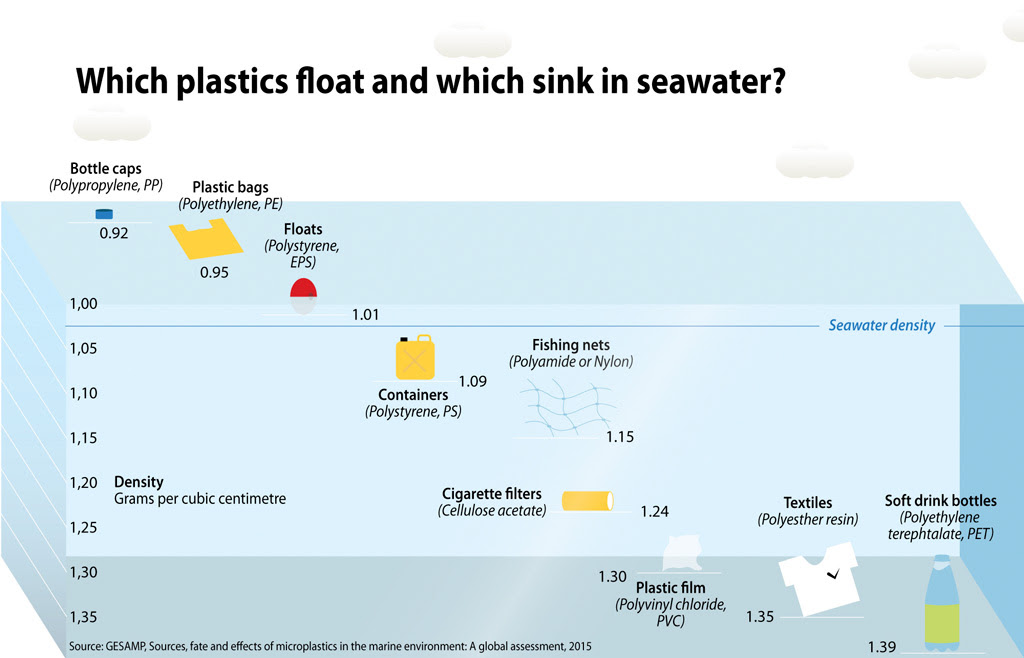 Does It Float?
In terms of buoyancy, not all plastic is created equal. Absent from the graphic shown here are the ubiquitous fragments of micro- and nano-plastic plaguing the world’s oceans. 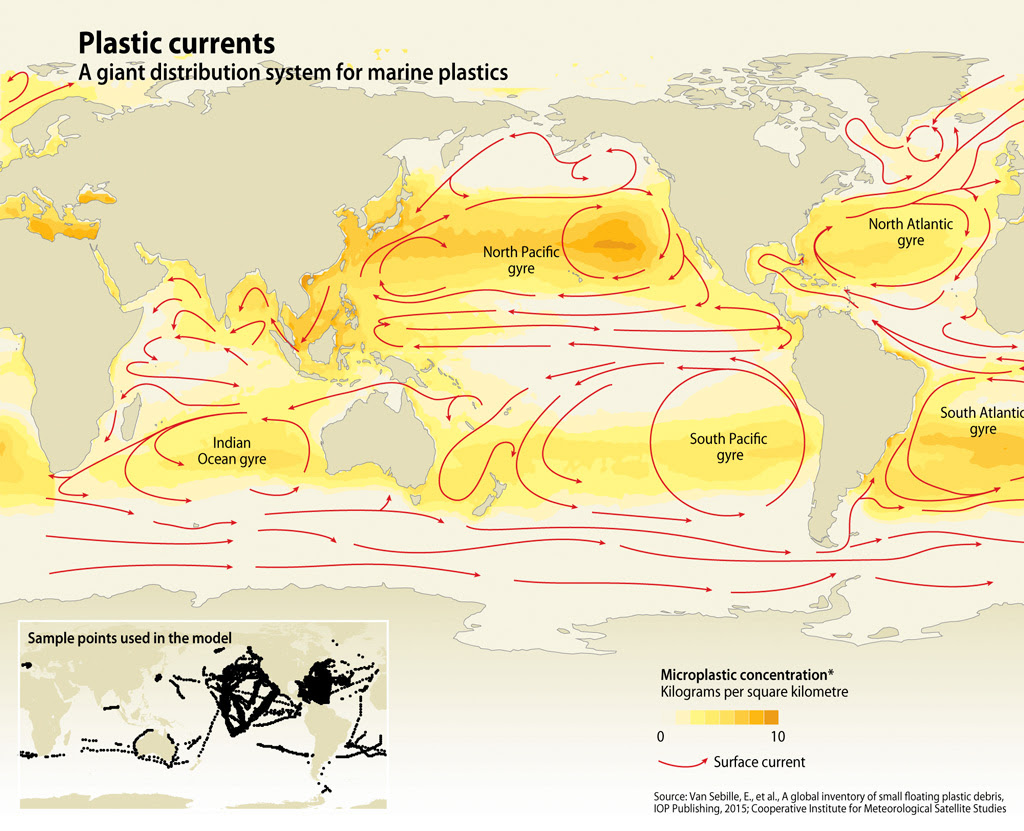 Plastic Currents
The geographic distribution of marine plastic debris is strongly influenced by the entry points and different ocean transport pathways, which are in turn determined by the density of plastic debris coupled with prevailing currents, wind and waves. 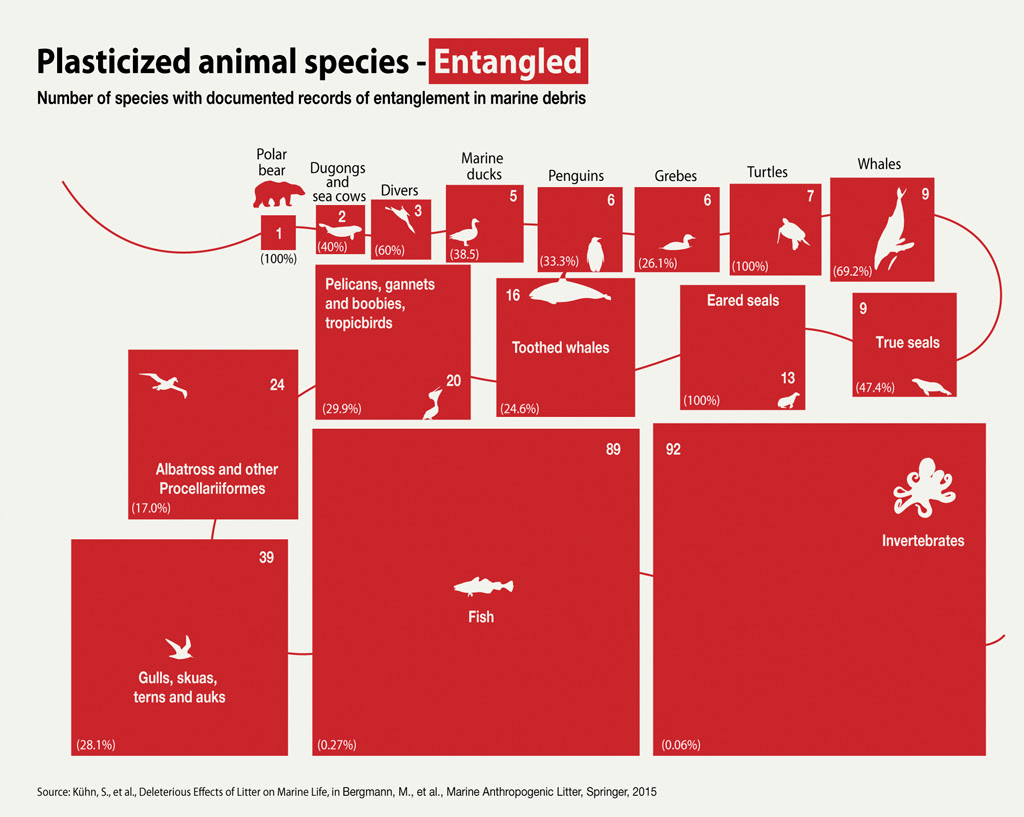 Entangled Marine Life
Entanglement can cause death due to drowning, starvation, strangulation, or cuts and injury that cause infection.
Much of the damage to marine life of this nature is caused by discarded fishing equipment — so-called “ghost fishing.”
Studies of scarring on whales from the Gulf of Maine indicate that more than 80 percent of right whales and 50 percent of humpback whales have experienced entanglement in fishing gear. 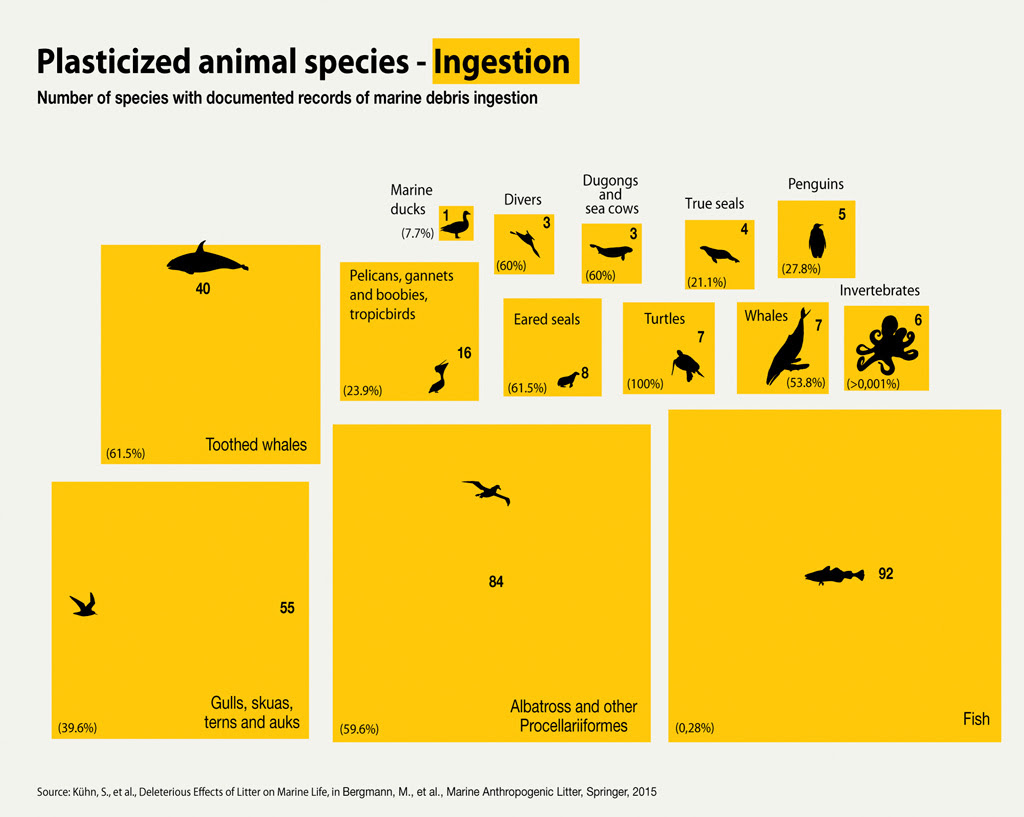 Marine Debris Ingestion
The ability of plastic particles in the ocean to attract organic chemicals that don’t dissolve, which include many well-known toxic substances, has led to a growing number of studies looking at plastics as a source of toxic chemicals in marine organisms.

The impacts of plastic — and in particular, microplastic — on marine life can be devastating. Hundreds of species of seabirds, turtles, seals, sea lions, whales and fish have suffered entanglement or death due to plastic pollution in recent decades. 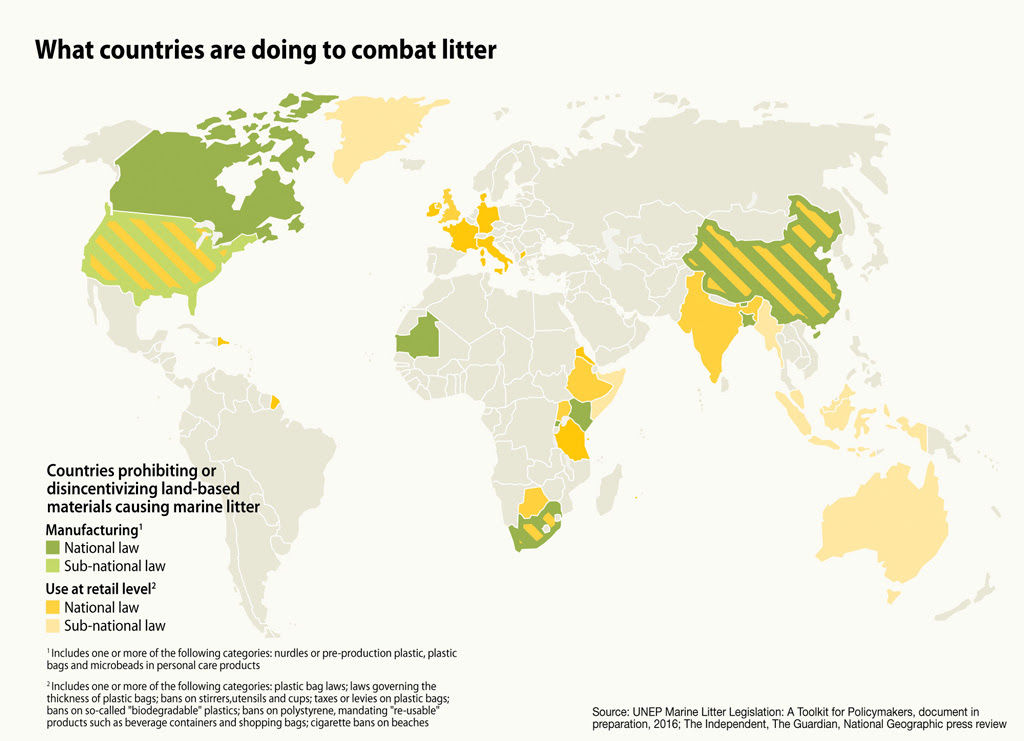 The Way Forward
Legislation and policies aimed at reducing the release of litter on land and at sea,will help reduce the amount marine debris entering the world’s oceans.

This collection of maps and charts prepared by Norway-based GRID-Arendal — a United Nations Environment Programme affiliate and partner with a mission of creating environmental knowledge to enable positive change — explains how plastic ends up in the world’s oceans and explores steps being taken to reverse this trend.