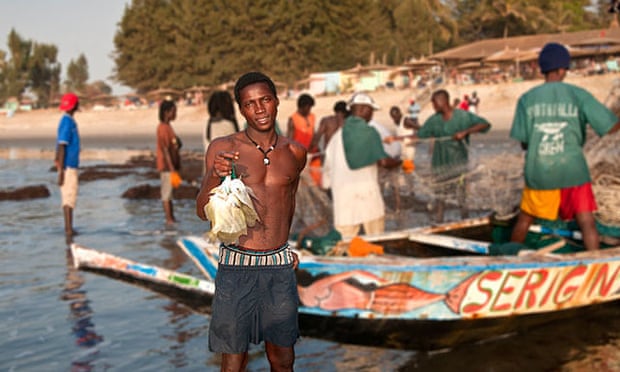 A fisherman with a catch of angelfish, near Serrekunda in the Gambia.
The report says if regional governments build up fish processing industries and indigenous fishing fleets, they could generate $3.3bn.
Photograph: Alamy

From The Guardian by Jo Griffin

Overseas Development Institute report says crackdown on illegal fishing, and building up national fleets, could generate billions of dollars for the region


If governments in western Africa could end illegal fishing by foreign commercial vessels and build up national fleets and processing industries, they could generate billions of dollars in extra wealth and create around 300,000 jobs, according to a new report (pdf).
The devastating, social, economic and human consequences of overfishing in western Africa’s coastal waters have been well documented but the report, Western Africa’s Missing Fish, by the Overseas Development Institute and Spanish investigative journalists porCausa, lays bare the extent of lost opportunities across countries including Senegal, Mauritania, Liberia, Ghana and Sierra Leone.
“The scale of the losses is enormous. Instead of jobs and development, the livelihoods of artisanal fishers are being decimated by foreign fishing fleets, which operate virtually unchecked,” says Alfonso Daniels, lead author of the report, which presents new evidence of the extent and pattern of illegal, unreported and unregulated fishing (IUU) in the region – a global “epicentre” of overfishing.

For the first time, researchers used detailed satellite and tracking data to analyse the two main practices of IUU fishing: the activities of reefers – large-scale commercial vessels that receive and freeze fish at sea – and the transportation of fish in large refrigerated containers that are subject to less strict reporting requirements.
In 2013, they followed reefers off the coast of western Africa and found vessels from China, Holland and South Korea operating there, with fish exported globally.
Among the 35 reefers operating in the region that year, routes were consistent with the transfer of catches from fishing vessels to reefers, including inside the exclusive fishing waters of Senegal and Ivory Coast, countries that have banned ship-to-ship transfers of catches. 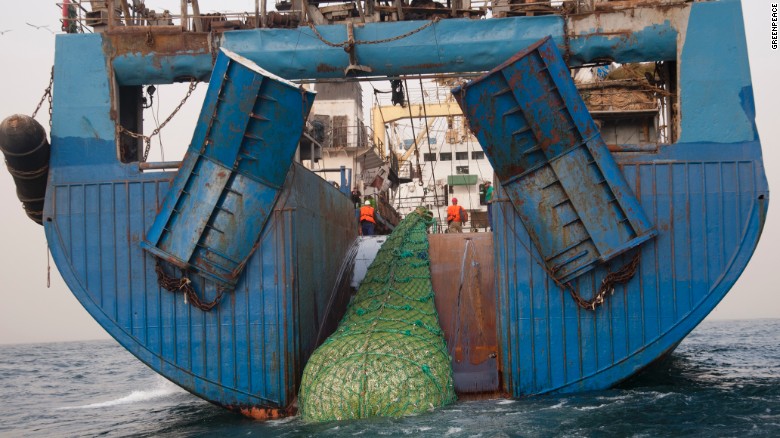 The 120 m long Russian super trawler trawler Mikhail Verbitsky ishing in West Africa waters. Foreign fleets are plundering the West African waters while fish stocks are diminishing
Bycatch like dolphins end up dead or dying in the giant nets of the super trawler

The tracking data also revealed the extent of IUU fishing via transfers on to container ships.
Daniels says that 84% of illegal fish is taken out of the region in this way, making it hard to stop illegally caught fish entering the global supply chain.
“Container ships are ignored,” he says.
“Whether willingly or not, the industry has found a way to take out fish under the radar.”
The report says that a “crisis of global governance on the world’s oceans” has meant that international efforts to prevent the plunder of marine resources are likely to fail.
Daniels says it is essential to address all parts of the chain, highlighting three measures to combat IUU fishing: a ban on transferring fish at sea, strengthening regulations, and investment in patrols in “hot spots” of IUU fishing.

Artisanal fishers are at the frontline of the crisis.
Usmane Kpanabum, a fisherman on the island of Sherbro off Sierra Leone, says his nets were slashed by South Korean trawlers that fish inside the five-mile coastal zone reserved for artisanal fishers.
Sierra Leone had just two coastguard boats to patrol its entire coastline in 2013.
If regional governments end illegal fishing and build up fish processing industries and indigenous fishing fleets, they could generate $3.3bn (£2.5bn), eight times the $400m they currently raise by selling foreign rights, says the report. 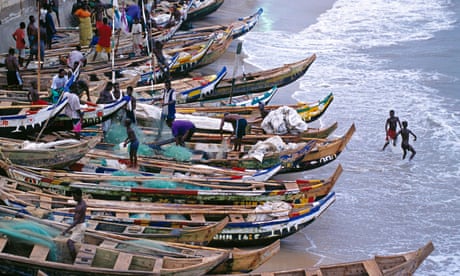 By developing their fishing sectors, western African governments could create up to 300,000 new jobs, with artisanal fishers connected to consumers.
Using data from the UN Food and Agriculture Organisation (FAO), the report says this would lead to an almost 10% increase in the total workforce in the fisheries sectors, and would also create jobs for 90,000 women and reduce youth unemployment.
It could also have a significant impact on food security, improving the diet and nutrition of people in the region as more households would consume fish protein normally exported by foreign vessels.
Daniels says: “We have a situation not only of missed opportunity but where resources are being exhausted very quickly – Nigeria and Senegal have very little left at all.”
According to one previous estimate, more than half of the stocks in the stretch of coast from Senegal to Nigeria alone have been overfished, with IUU fishing believed to account for between one third and half of the total catch. In 2012, according to data from USAid, Senegal was losing around $300m due to IUU fishing – equivalent to 2% of GDP.
“There are several global epicentres of overfishing – including the Pacific and South America – but western Africa is one of the worst because of the impact of overfishing on problems such as the drugs trade, organised crime and illegal migration,” Daniels says.