This animation shows how the floating debris from the MH370 aircraft could have spread, from the day of the crash up until May 2016.
The location of the debris at the various times is calculated using a computer model based on oceanographic data and the location of the five confirmed debris found to date (indicated by red dots, used to weight the outcomes of multiple simulations)


The crashed remains from the Malaysia Airlines Flight MH370 could be as much as 500km further north than the current search area, say scientists in Italy.
Their assessment is based on the location of confirmed debris items and computer modelling that incorporates ocean and weather data.
They say this has allowed them to determine where the plane most likely hit the water and where future aircraft fragments might wash up.
The MH370 search will soon be halted.
Authorities have agreed that "in the absence of new credible evidence" the effort to find the plane on the ocean floor west of Australia will be suspended once a zone covering 120,000 square km has been fully surveyed.
That could happen in the next few weeks.
A team led by Eric Jansen, from the Euro-Mediterranean Center on Climate Change in Italy, is the latest to try its hand at using modelling to identify the impact site.
The approach relies on two years of high-resolution data that describe the currents and wind conditions across the Indian and Southern oceans.
Multiple simulations were used to predict where objects might drift given different starting points.
These forecasts were then analysed and the greatest weight given to those tracks that best matched the locations of known MH370 debris items.
These are the parts of the Boeing 777, such as an engine cowling and wing flap, that have since washed up on the beaches of Africa and Indian-ocean islands. 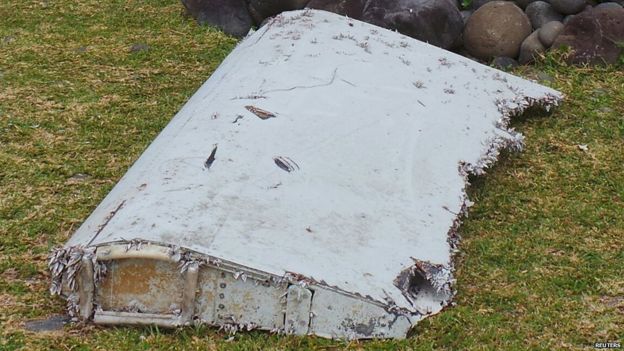 A number of items from the plane have washed up on beaches
To improve their simulation, the researchers used the locations of the five confirmed debris found to date: two in Mozambique and one each in Réunion, South Africa and Rodrigues Island (Mauritius).
(Reuters) 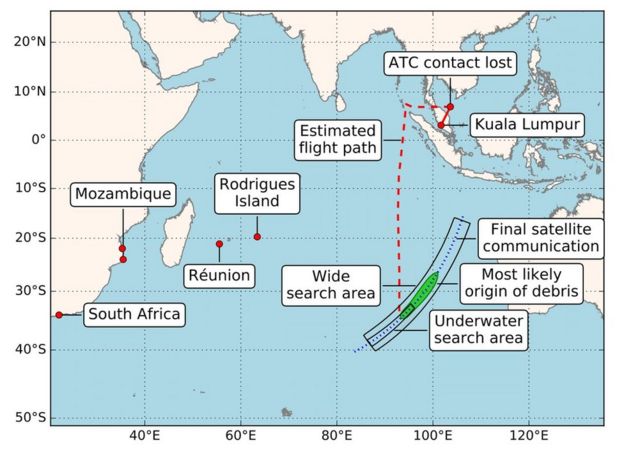 The results suggest the plane could be on the ocean floor to the north of the underwater search area
To find out how MH370 debris drifted since the crash, the researchers ran a computer model that used oceanographic data from the EU Copernicus Marine Environment Monitoring Service, including data of global surface currents and winds over the past two years.
(Jensen et Al)


An animation of the debris pathways originating from Location 11.
The tracks of particles over a ten day time window are shown.
Animation courtesy of the University of Western Australia.

This means also that should more debris come to light, the model will refine its solution for where in the ocean the missing jet is most likely to be found.
And given that the underwater search is about to be suspended, Dr Jansen says perhaps greater effort should now be directed towards finding more washed-up debris.
It is an endeavour that would be low-cost, he argues, but would very much aid the type of research he does, while at the same time possibly yielding additional information on the state of the aircraft in its final moments.
Such inferences can be gleaned by examining materials for tell-tale damage.
Dr Jansen and colleagues have published their research in the journal Natural Hazards and Earth System Sciences.
Malaysia Airlines flight MH370 disappeared in March 2014 with 239 passengers and crew.