Diving enthusiasts could be used to measure ocean temperatures 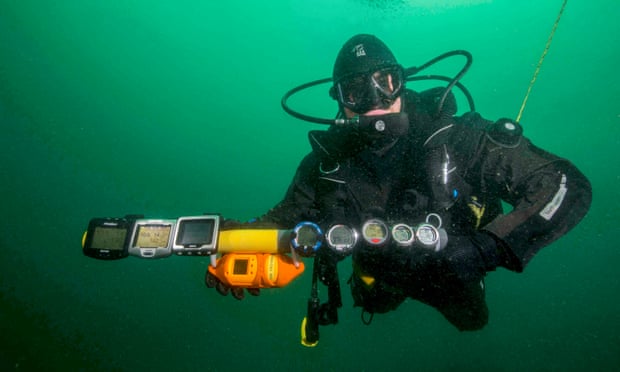 
Millions of holidaying scuba divers are able to become citizen scientists and take vital measurements of ocean temperatures, which are being driven up by climate change.

More than 90% of the heat trapped by global warming goes into oceans, where it drives hurricanes and disrupts fish stocks.
Satellites can measure surface temperature when there are no clouds, but getting data from below the surface is much harder and more expensive.

(a) Screenshot of the ‘diveintoscience’ interface, where simple query tools and summary data are displayed on the left sidebar calculated for the area displayed on the map.
(b) Locations of temperature data stored on the “diveintoscience” portal. In map pane a, the circle represents the location of the dive, the size of the circle relates to the number of dives and the colour of the circle represents the average temperature.
The screenshot (a) was taken from the ‘diveintoscience’ portal, with both maps (a) and (b) generated using the ggplot2 and maps functions of R (version 3.2.2), which uses publicly available coastline coordinates from the NOAA National Geophysical Data Center.

A flotilla of 3,000 diving robot buoys provides measurements, but millions of recreational and commercial divers around the world could also play a role.
A study, published in Science Reports on Friday, shows that measurements taken from the decompression computers often worn by divers can provide accurate data on ocean temperatures.

Scientists from the Centre for Environment, Fisheries and Aquaculture Science (Cefas) in Scotland took a range of decompression computers on dives alongside scientific instruments, and showed that the results tallied.
The scientists have already collected more than 7,500 dive records from around the world via the Dive Into Science website.

Kieran Hyder at Cefas, who led the citizen science project, said: “To undertake a global science programme that could generate this information would be hugely expensive, but there are millions of sport and commercial dives every year.
Making use of just a small fraction of those dives will greatly increase our knowledge of what is happening worldwide.
“The potential of scuba divers to contribute to ocean monitoring is huge and I believe that this study demonstrates only the tip of the iceberg,” he said.

The new data is particularly valuable in highly changeable coastal environments, where many dives occur, as well as in areas that are rarely sampled by other methods.
According to the Dive Into Science project, which is funded by the UK’s Department for Environment, Food and Rural Affairs: “This extra data could prove crucial in the efforts to understand and predict the effects of our changing climate.”

Other researchers have investigated the ability of tagging marine creatures to provide temperature and other data.
The creatures could include penguins and seals and the latter could be especially useful due to their deep dives.