My 100 minutes lost in the most inhospitable seas on earth

www.179W.co.uk
Sunday 30th March 2014.
Andrew Taylor, an amateur sailor, taking part in the 9th Clipper round the world yacht race, aboard the 70' ocean racing yacht 'Derry LondonDerry Doire'.
Fell overboard during horrific weather conditions and was lost at sea for 1hour and 40minutes in the very middle of the icy cold North Pacific.
The crew of the yacht were totally alone in their search and the eventual dramatic recovery of Andrew, who was deeply hypothermic when recovered.
This book sets the scene as to how Andrew initially came to be competing in the race, his team’s eventful and truly amazing journey yacht racing over 45,000 miles around the world.
The epic story of his desperate fight for survival in the North Pacific.
Andrew's miraculous, surprising, and almost immediate return to ocean yacht racing.
All sales proceeds from this book go to charity, split equally between;
The Ellen MacArthur Cancer Trust and The Newmarket Day Centre

From The Telegraph by Andrew Taylor

The first thing that struck me was the silence.
Just moments before I’d been on the foredeck of a 73ft racing yacht, face-to-face with my skipper but screaming to be heard over howling 60mph winds and whipping rain.
A winter storm was blowing in, turning the sky black.
We were rushing to change to a smaller headsail in time.
Suddenly, a huge wave smashed into the side of the boat and sent me tumbling headfirst into the freezing North Pacific.
I braced myself for the safety line fixing me to the boat to tauten. It didn’t.

The yacht ploughed on past at 25 knots, its rudder smashing into my legs so hard that I was convinced both had been broken.
Then the boat was gone, swallowed up by the gloom, the waves, the rain and spray.
It was just me: gasping for breath and fighting to stay afloat in the 30 metre swells of the most inhospitable ocean on earth.
I was 2,000 miles from land, on map coordinates I will never forget: 179W.

This August, I will be standing on the banks of the Thames watching a fleet of a dozen yachts embark on the 11th Clipper Round the World Yacht Race, a 40,00 mile odyssey that takes 10 months.
It will be an exhilarating sight. I know, because two years ago I was part of one such flotilla.
The race very nearly cost me my life.

Like many taking part in this year’s event, I signed up for the adventure.
I was 46, divorced, and had been working as a catering director at the Olympic Park and, prior to that, at Wembley Stadium for a decade.
I was exhausted and had decided to take a year off.

The thrill of escape

Circumnavigating the world was a massive personal decision, even aside from the cost – a place this year is £48,000.
I would not see my teenange daughter Siobhan or my parents for almost a year.
And I had no sailing experience.
The Clipper race involves a rigorous selection process and intensive training in the months leading up to the race start.
You learn that life aboard a racing yacht is hard work mentally and physically, gruelling at times and often dangerous.
You are reliant on yourself and your fellow crew members.
For many weeks, you will be far from land and from rescue services.
It is not something to be undertaken lightly but it was what I wanted: the pleasure of working as a team; the thrill of escape.
I was assigned to the yacht Derry-Londonderry–Doire - each boat is named after a sponsoring city or region in the world - and skippered by the 32-year-old Sean McCarter.
There were 10 ‘‘round the world crew’’ on board and we’d be joined by ‘‘leggers’’, individuals who had signed up to do one or more of the 16 legs of the race, joining at the start or on one of the eight stopovers across the world.

We had already sailed the Southern Ocean, as well as the notoriously unpredictable waters of the Bass and Taiwan straits and, between us we had suffered a broken arm, ribs, fingers, shoulder blade, and a dislocated shoulder.
Leg 10, however, was the part of the race everybody was dreading.
The route took in 5,600 nautical miles between Qingdao in China and San Francisco - a month-long journey through seas known as the most violent on earth.
The nights were so dark you couldn’t even see the waves crashing over the boat.
The isolation was total, just endless boiling sea in every direction.
At 179W, the international space station is only 250 miles above. 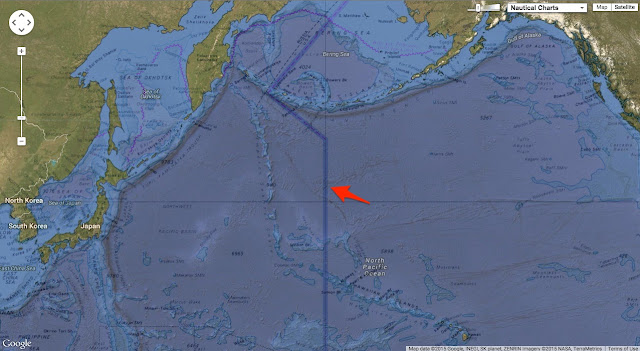 The day it happened was March 30, my mum’s birthday.
I’d been on deck since 5am and it was an hour before I was due to go off watch at midday.
I cannot properly describe the hideous, sickening realization that I wasn’t clipped on to the boat - a standing order in rough weather and especially when working on the pitching, tossing fore-deck.
The impact of the cold was instant, the sea temperature being no more than two degrees.
Even though I was wearing a dry suit (which provides thermal insulation in water) I began to feel the iciness seep in, gnawing at my extremities and the small of my back.
Had I not been wearing the suit I would have been dead in minutes.
Clipped to my life jacket was an AIS beacon, a device which once activated would alert those on the boat I was in the water and help them to locate me.
I had bought it myself before the trip and now it was my only hope.
I reached down into the water and turned it on, praying that the signal to the boat would be picked up and alert them to my position.
I clutched the beacon as tight as possible in my hand and tried as hard as I could to stop being tossed like a rag doll between the waves.

I thought about my daughter Siobhan and missing my mum’s birthday.
My life didn’t flash before my eyes, though.
I was too intent on not swallowing water and struggling to breathe.
When the storm that had been threatening hit in all its fury, it was like being in a washing machine: wave after wave smashed down upon me.
I remember seeing the boat a few times and realizing they had stopped.
At one point I could see someone was up the mast which at least confirmed they were looking for me.
But it was obvious they were some miles away.
One hour in I realized I had stopped shivering.
I knew from my race training this was a prelude to the euphoric feeling associated with the advanced stages of hypothermia.
I did everything to fight it, even taking my spray hood off and turning into the wind to get cold again.
I had a watch on but I never once looked at it because I thought it would only demoralise me.
At some point I decided to reboot my beacon - and thank God I did.
This time it flashed differently and I realised it hadn't been working properly before and the boat may not have picked up my signal.
Perhaps this time.....

Over the course of that dreadful 100 minutes in the ocean I had all kinds of mental experiences, some real, some the product of my battered consciousness.
At times I was shouting at myself to keep fighting and stay alive.
Even now, I can’t bear to read what I’ve written about it or remember it.
When I first head voices - snatches of shouting on the wind - I wasn’t sure if it was my imagination. Then the boat was on top of me – all 36 tonnes of it crashing up and down the waves, both a wonderful and terrifying sight.
That wasn’t the end of the ordeal, though.
In training we had, many times, practiced lowering a rescuer from the boat to clip a helicopter strop on to the man overboard and then haul him out.
But the conditions that day were so bad that the rescue swimmer, a friend of mine called Jason Middleton, couldn’t get the clips on to me.
Twice, I fell back into the water and the boat had to go around again in a figure of eight to re-start the rescue.
Finally, after several attempts, the clip snapped shut, but at that moment the boat rolled back and forth violently and it smashed me repeatedly against the side.
I was convinced I was going to drown.

One more attempt and several crew members were leaning over in a desperate attempt to pull me up by hand and get me onboard.
Eventually it was me who grabbed on to a guard rail and miraculously haul myself in.
I will never know what gave me that final strength – perhaps it was the instinctive knowledge that it was the last attempt before my body succumbed.
Either way, I remember being in a heap face down on the deck.
I turned and looked up at the skipper and he had this massive smile on his face.
He said: “Hey Andrew we’re going to San Francisco, fancy a lift?”
I was still in grave danger.
If I had been on land I would have been in intensive care.
I was put in a sleeping bag surrounded by bottles full of hot water, and Susie Redhouse, a paramedic from London who was the boat medic, stayed with me as I started to warm up – refusing to let me sleep.
I had severe shock and hypothermia, my face was was covered in abrasions from the saltwater and my battered legs in agony.
But the principal fear was of secondary drowning when your lungs flood.
The simple process of warming up was the most intense pain I’ve ever experienced as if my skin was on fire.

It was 12 days before we reached land.
During that time I slept a lot, ate little, and slowly began to limp around.
Speaking to my family over the satellite phone was just amazing.
News of the rescue had preceded our arrival in San Francisco and there were television crews everywhere.
I resolved then that I was going to finish the race.
I spent six days having intense physiotherapy before rejoining the boat.
I was, of course, worried, but quitting would have been the easy thing to do – and that is not why I signed up.
I decided to write a book detailing my rescue not to make money – all proceeds are going to charity - so that others can learn from my experience and it can help improve marine safety.
Since finishing the race last summer, I have worked closely with the Clipper organisation and marine safety manufacturers.
We have updated and altered the clips and straps on the rescue equipment, and we have also changed training for man over board drills so now the rescue swimmer actually is submerged in the water rather than being lowered down on a halyard.
The AIS beacon has also had its software updated and now will reboot automatically if it does not connect with the signal onboard.
I kept my own AIS beacon and have it framed.
On a personal level, I needed to come to terms with what happened and writing has helped me do that. It was a miracle that I survived.
I wouldn’t miss the start of this year’s race for the world.
My experience of being lost at sea makes me all the more determined that others should continue to explore it.