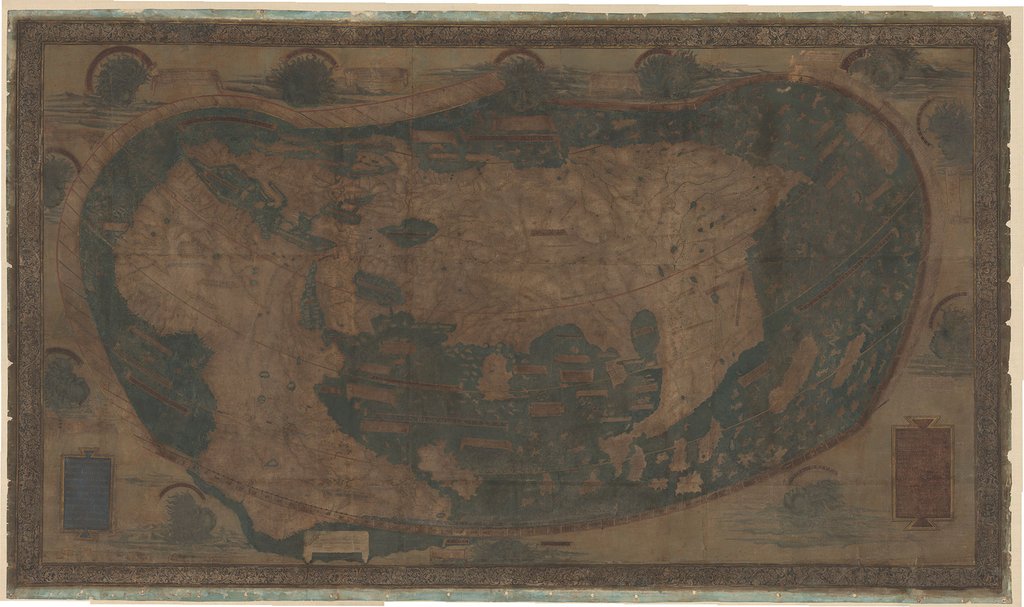 This map of the world drawn by Henricus Martellus in about 1491 was donated to Yale in 1962.
Its faded condition (shown above) has stymied researchers for decades.
The multispectral image of the map (below) reveals text and details invisible to the naked eye.


The primary way we share ideas today is the internet.
In the 15th century, it was cartography.
And now, researchers at Yale are giving us a glimpse of one of the most influential maps in history—parts of which, up until now, had been too faded and aged to read.
Henricus Martellus isn’t a name you’d recognize unless you’re interested in map history, but he played a role in some of the most important events of the early modern world, thanks to a map he drew in 1491.
It showed the world as Europe understood it, and scholars have long theorized that it gave Columbus the information he needed to find the New World (it also may have famously misinformed him about the location of Japan, today known as the Bahamas).
That a map could survive 500 years—524 years, to be exact—is pretty amazing.
But much of the text on the 6-foot-wide map has been lost to history thanks to wear and tear.
Since the map came to Yale in the 1960s, researchers have tried to decipher hundreds of words and shapes that were too faded to read.

Text in the southern Asia portion of the map describes the "Panotii" people, who purportedly had ears that were so large they could use them as sleeping bags.

It’s only within the past year that they’ve succeeded—thanks to improvements in multispectral imaging.
In Yale News, Michael Cummings explains how the technology has revealed hundreds of new words that seemed lost forever.
In his story, he explains how a team at Yale is using multispectral imaging to see through the ancient haze: The process captures images of the map at 12 different light frequencies which, when processed using imaging algorithms, reveal words and figures where our eyes see nothing.
Cummings was kind enough to send along higher-res versions of the maps’ new details, a few of which you’ll find below.
Read the full story here.

“Animals Different From Ours”

As Cummings explains, a lot of the text passages on the map describe not only local populations, but also the local wildlife of regions throughout the world—sometimes lifted from The Travels of Marco Polo.
For example, the passage below is warning of a monstrous creature today known as an Orca, which Yale says Martellus described as “a sea monster that is like the sun when it shines, whose form can hardly be described, except that its skin is soft and its body huge.”

A text box in the Indian Ocean warns of the orca

Another warns of “large wildernesses in which there are lions, large leopards, and many other animals different from ours:”

Another cool detail revealed by the multispectral analysis?
That the way Martellus depicted Africa was actually based on African sources. According to Cummings, the way Africa is drawn on the map actually came from Ethiopian input—specifically, “three Ethiopian delegates to the Council of Florence in 1441.”
The council was called by the Pope—who invited the Ethiopian delegates, providing insight into how the African continent was shaped.

Again, cartography was a hugely important tool during the Age of Discovery.
Martellus’s map was based on others before it, and his map went on to influence how several other cartographers depicted the new world.
The multispectral images created by Yale give us a look at that heritage—the newly-uncovered words include some shared with a later map, by Martin Waldseemüller in 1507, suggesting Waldseemüller may have used this map to draw his own.

We’ve written about Waldseemüller’s map before, actually: It was the first known cartographic rendering of America as a continent.
Of course, his 16th century America looks very different from our own. “America” is a long, thin peninsula that seems to stretch from Nova Scotia down to Florida.
Beyond that, neither Waldseemüller or Martellus could know.
It would take far longer to find out what existed in the blank patch of map—and even longer for us to figure out what they thought might exist there.