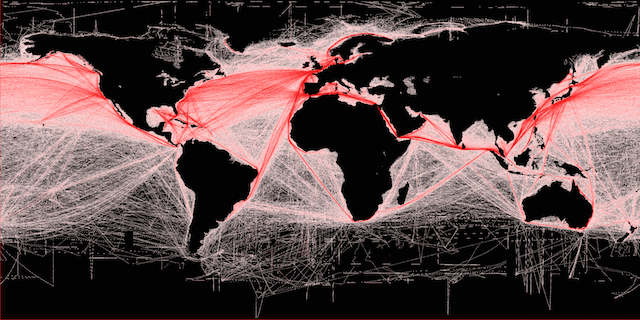 Global shipping routes crisscross the world’s oceans in this map of shipping lanes derived from a 2008 study of the human impact on marine ecosystems.
Maritime traffic along these lanes is also a major source of noise pollution, which is increasingly considered harmful to marine mammals.
Credit: Grolltech

Maritime traffic on the world’s oceans has increased four-fold over the past 20 years, likely causing more water, air and noise pollution on the open seas, according to a new study quantifying global ship traffic.

Traffic went up in every ocean during the 20 years of the study, except off the coast of Somalia, where increasing piracy has almost completely halted commercial shipping since 2006.
In the Indian Ocean, where the world’s busiest shipping lanes are located, ship traffic grew by more than 300 percent over the 20-year period, according to the research.


Edith Maersk is the largest ship ever to enter the Thames arrived at DP World London Gateway, the UK’s new deepwater container port.
The 397-metre-long, 56-metre-wide Edith Maersk has a draught of 16 metres and carries up to 15,500 TEU (twenty-foot equivalent units).
DP World London Gateway operates eight of the UK’s largest quay cranes; their air draft and overreach capabilities mean that the port is well-equipped to handle the world’s largest vessels of today and tomorrow.

Ships powered by fossil fuels dump oil, fuel and waste into the water and pump exhaust into the air. Shipping is also a major source of noise pollution, which is increasingly considered potentially harmful to marine mammals, said Jean Tournadre, a geophysicist at Ifremer, the French Institute for the Exploitation of the Sea in Plouzane, and the study author.
“I found it quite worrisome that the ship traffic grew so much, even in very remote regions of the world,” Tournadre said, “especially when we know that they are the major source of pollution [on the open ocean].”


International trade and the sizes of merchant fleets have both enlarged rapidly over the past two decades, explaining the steep rise in ship traffic, the study reports.
The new analysis has been accepted for publication in Geophysical Research Letters, a journal of the American Geophysical Union.

Burgeoning ship traffic has increased the amount of pollution in the atmosphere, particularly above the Sri Lanka-Sumatra-China shipping lane, where the study notes a 50 percent increase in nitrogen dioxide, a common air pollutant, over the 20-year period.

Tournadre said he hopes the new study will increase scientists’ understanding of how human activities are affecting marine ecosystems and improve models of atmospheric pollution in the open ocean.

The new dataset will provide scientists with invaluable insights into the patterns of ship traffic and the traffic’s effect on the environment, said Batuhan Osmanoglu, a radar systems engineer at NASA’s Goddard Space Flight Center in Green Belt, Md., who was not involved in the study.
“The nice thing about this study is that they have a unique dataset, that maybe we’re looking at for the first time,” he said.
“Whenever you have a unique dataset you can quite easily learn something new.”

The new study is the first to track ship traffic on a global scale, Tournadre said.
Currently, ship traffic is monitored using the Automatic Identification System (AIS).
When vessels are near the coast, they use transponders to send out their location information to other ships and base stations on land.
However, the AIS system doesn’t work very well when ships are out on the open ocean.
Vessels are often out of range of terrestrial base stations or other ships, and few satellites carry the AIS instrumentation necessary to locate vessels from space. The new method outlined in the study uses altimeters, or instruments that measure altitude, aboard satellites to detect the location of ships at sea, similar to the way these instruments have been used to track icebergs.
The altimeter sends a radar pulse down to Earth from the satellite and constructs an image of the surface based on the time it takes the pulse to bounce back to the instrument and the shape of the pulse when it arrives.
The method works similar to throwing a ping pong ball at the ground: if you know the velocity of the ball and the time it takes to bounce back to your hand, then you can calculate how far from the ground you are.
The shape of the returning pulse can tell you something about the features on the ground.
A smooth target like the ocean will bounce back an expected pulse shape, but if something like an iceberg, island, or ship is present, the shape of the echo will change.

In 2007, Tournadre was poring over hordes of satellite data for signs of icebergs in polar seas, when he noticed an odd shape in the data.
“We had some unconventional data in a region, and careful analysis showed us that it was a lighthouse near shipping lanes,” he said.
“As we processed the data over the whole globe, we also detected ships.” 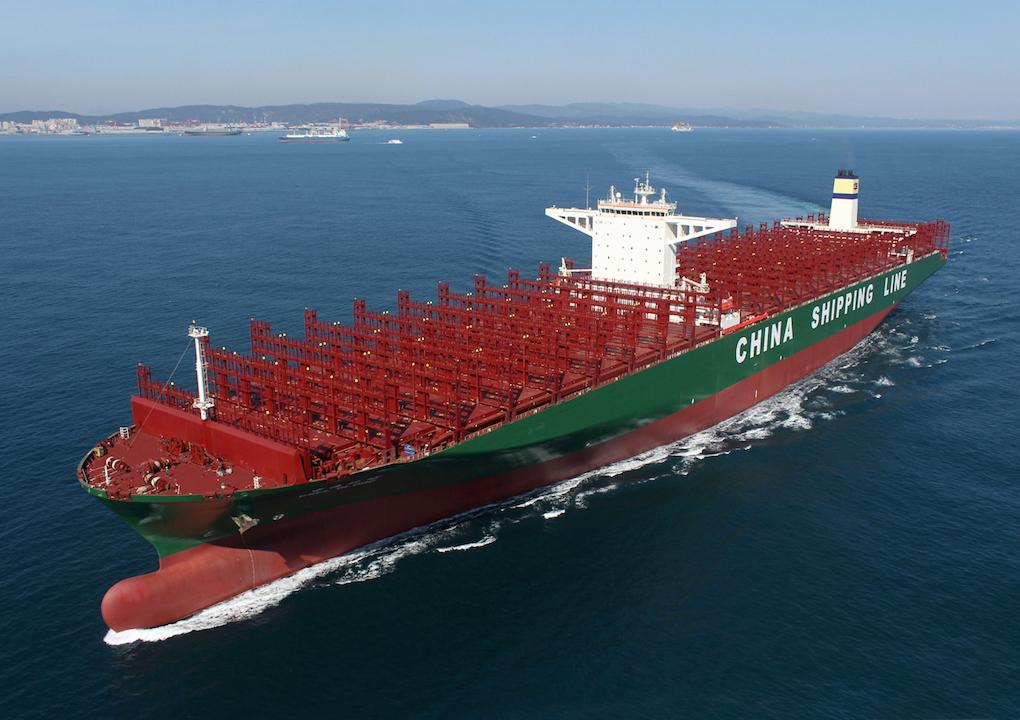 Tournadre found that the altimetry data accurately reproduced known shipping lanes and could be used to estimate the number of vessels on the ocean worldwide.
The study used altimetry data from seven different satellites to map ship traffic from 1992 to 2012.

Using satellite data made it possible to calculate ship traffic for the entire globe, whereas AIS records provide relatively limited coverage in both space and time, Tournadre said.
The new method also allowed him to look back at two decades of traffic using archived data, and give independent measurements of ship traffic that were not based on the will or capability of ships to transmit their own positions.

However, Tournadre also cautions that some of the growth he has seen in ship traffic could be overestimated because ships, especially container ships, have become larger over the past two decades and possibly easier to detect with altimetry data.