Wine Island may be wiped off map

Terrebonne's Wine Island may soon be wiped off the map.

Wine island shown before Hurricane Isaac
In Terrebonne Parish, there are two excellent, successful examples of how barrier islands can be reconstructed or can be stabilized (for a period of time!) via leveeing techniques.
Wine Island (formerly called Vine Island) was located near the mouth of the Houma Navigation Canal.
The Parish implemented a plan whereby a ring of stones was placed where Wine Island used to be and dredge material was placed inside.

Hurricane Isaac in 2012 took what little remained of the barrier island and swept the sandy shoal that remained outside the ring of rocks built to protect it.

Tim Osborn, regional manager of NOAA's Office of Coast Survey, said the agency is moving swiftly to update its nautical charts because what remains is a serious hazard to boaters.

Rocks were put around the island decades ago to stem erosion, but Hurricane Isaac proved to be the island's downfall.
The shoal that remains has migrated outside the rock barrier.
“No one has any buoys or lights marking the area, so if you're moving into the area to do some fishing, that ring of rocks just at the waterline poses a major hazard,” Osborn said.

With no immediate plans by the parish or the U.S. Army Corps of Engineers to restore the island, Wine Island's name could also be stripped from nautical charts.
“It has ceased to be an island,” Osborn said.
Wine Island's degradation reflects a larger change across the coastal Louisiana landscape, Osborn said, and the loss of important coastal habitats that may not be reclaimed. 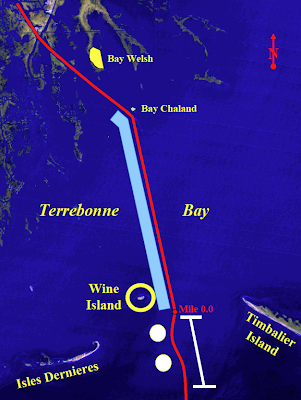 Earlier this year, the office remapped Plaquemines Parish's coastline, removing 31 place names, after finding that many of the lakes, bays, bayous and passes that once existed no longer have the defining features required to be included on the map.
The barrier island didn't just provide hurricane protection.
Wine Island was an important nesting habitat for thousands of birds.

“Wine Island is the poster child for the multiple uses of our barrier islands,” Terrebonne Coastal Restoration Director Nic Matherne said.
“The island provides us with storm protection, but before people were here we had wildlife, and the birds that use these islands regularly.”

Wine Island - Before Gustav
Wine Island, a barrier island off the Terrebonne Parish coast, in 2007.

Wine Island, off the Terrebonne Parish coast, has vanished after Hurricane Gustav.
Louisiana Department of Wildlife and Fisheries

During the 2008 season, 11,000 pairs of birds nested on the island.
Nesting birds prefer islands that are small and remote because they can't support larger predators that could disturb the eggs or eat the young, said Kerry St. Pé, director of the Barataria-Terrebonne National Estuary Program.
Nearby Raccoon Island still hosts the largest colony of brown pelicans in Louisiana.

St. Pé said that scientists from the estuary program recently travelled to Wine Island to evaluate it for possible future plantings or restoration projects.
“We were asked to go look at it, and there was just nothing left,” he said.
“We elected not to reestablish any vegetation because the island was too far gone.”
For many years, Terrebonne was committed to restoring the island, St. Pé said.
“Wine Island has a long history of being protected and restored by Terrebonne Parish,” St. Pé said. “In the early years Terrebonne really took an interest in Wine Island, and the island was ringed with rocks.”
Dirt dredged from the Houma Navigation Canal has been used at least four times to bolster the island since 1991.
But recent storms took their toll.
Hurricanes Gustav and Ike in 2008 reduced the island to almost nothing, and its plant life was wiped out. The U.S. Army Corps of Engineers then opted not to include Wine Island in its plan to restore Terrebonne's barrier islands.
Scientists deemed the island unsustainable.
Hurricane Isaac then washed away the remains. An aerial view of Wine Island in the Gulf of Mexico, shows it dotted with thousands of seabirds, which mate and nest on the tiny spit of land.
Coast Guard observers conduct multiple daily overflights of sensitive sites like these to ensure that booms are correctly placed to protect them from contamination by oil from the BP spill.
photo : Isaac Pacheco

It's not just Wine Island. All of Terrebonne's barrier islands are undergoing severe erosion, including the Isles Dernieres and Timbalier islands, Matherne said.
Terrebonne is building a levee system to provide it with storm protection, but the ecosystem outside that levee protection provides vital support to wildlife as well as protection, he added.
Matherne said that help is coming for Terrebonne's barrier islands.
Earlier this year, a plan was announced to spend $340 million in early restoration dollars from BP oil spill fines on barrier islands in Louisiana, including a $110 million project to restore beaches, dunes and back-barrier marshes on Whiskey Island.
The rest of the parish's islands are also in the state's plans for post-spill restoration, Matherne said.

But St. Pé said that you can't just restore the islands.
You have to also restore land inside the system.
Less land inside the system means the islands are subject to a greater volume of water that must drain past each day, which translates into increased erosive forces.
In addition, barrier island work is more expensive because you have to haul equipment and dredging material from far away.
But St. Pé said rebuilding smaller islands preferred by birds as nesting habitat is just important.
He suggested piggybacking dredging projects to build smaller islands on top of larger projects.
The Barataria-Terrebonne National Estuary Program is aiming to rebuild some of these smaller islands in Plaquemines Parish.