What Arctic warming means for one seabird

George Divoky: the bird-watcher who saw the future
For nearly 35 years George Divoky has been returning to Cooper Island, a small, low strip of desolate land close to Barrow, AK.
Initially he went there simply to study Black Guillemots, but as - over the decades - he tracked the dates of their arrival and the new chicks hatching, he realized he was documenting how climate change was affecting both an organism and an ecosystem.
As summer ice retreated, food for the chicks was harder and harder to find - and polar bears began to roam the beach.
(other video BBC)

A small colony of black guillemots living on a gravel spit off Point Barrow is providing a unique insight into the changing Arctic environment. 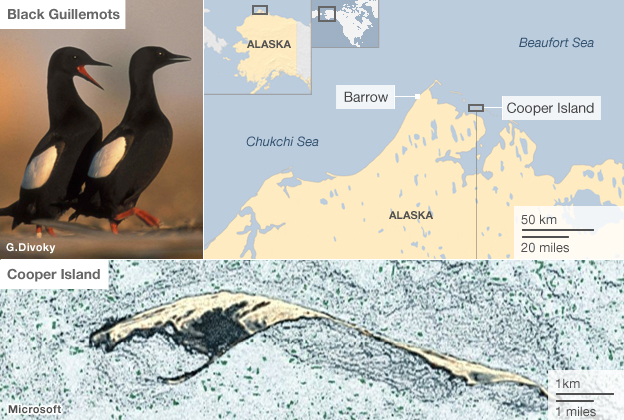 The Cooper Island birds feed their young on cod that hug the underside and edges of the polar pack ice.
But their access to this prey source is being limited by the big retreat in seasonal ice cover now under way.

How the guillemots respond will turn a lens on the wider changes taking place in Arctic ecosystems, biologists say.
"Things could go either way for these birds," explains George Divoky, who has studied the guillemots since 1975.
"It's just not known at this stage whether they will be able to cope with the big change by adapting to new food sources, or if they will have lower and lower breeding success until the colony eventually disappears," he told BBC News.

Dr Divoky was speaking here at the American Geophysical Union (AGU) Fall Meeting, the largest annual gathering of Earth scientists.
The bird biologist spends three months of the year on Cooper Island, which is about 40km east of the Alaskan town of Barrow.
He has tracked the roller coaster ride of the spit's black guillemots (Cepphus grylle mandti) across four decades.

It was the warming climate that first allowed the birds to make the island their home.
They nest in the cavities found in abandoned old boxes and piles of driftwood, but need 80 days clear from snow to give their chicks time to hatch and fledge.
And it was only in late 1960s and early 1970s that such summer conditions persisted to enable the guillemots to breed routinely and successfully on Cooper.
The following couple of decades then saw the colony flourish.
The Arctic pack ice was rarely more than about 25km off shore, providing the parent birds easy access to the nutritious Arctic cod (Boreogadus saida) they prefer to feed their young.

In the past two decades, however, the summer marine ice-cover has retreated far from land.
This September, the lowest ice extent ever recorded in the satellite-observing era, saw the edge of the ice pack sit hundreds of km from the island.

That has severely restricted the guillemots' ability to retrieve the cod, which feed on the plankton that in turn depend for their existence on the algae that coat the underside of the ice.
The guillemots have responded by shifting to lower quality fish, such as fourhorn sculpin (Triglopsis quadricornis).
But their breeding success has suffered as a consequence.
"The sculpin is a bottom-fish. It doesn't have a very high fat content. It also has a very bony, spiny head and guillemot chicks don't even like to eat it," explained Dr Divoky.
"When the ice leaves, or the water temperature picks up to the point where the cod leave, the guillemots are going back to the same feeding spot but don't find anything. Then there's a day or two or three lag before they realise they have to switch to the sculpin. And it's in that lag that chicks die because the parents don't provide their young with the food they need."

What is more, the warmer conditions on Cooper mean sub-arctic species have begun to invade the spit and compete with the guillemots.
Horned puffins (Fratercula corniculata), for example, will try to seize guillemot nests, kicking out any eggs and nestlings that are already present.
Polar bears, too, now seek refuge on the island when the ice is at its most distant in August/September, and will eat guillemot young.

In 2011, Mr Divoky replaced all of the guillemot nest sites with plastic cases to make it difficult for the puffins and bears to disturb the colony
But the food issue is something the biologist can do nothing about.
All he can do is document its impact.
"Guillemots are generalists and we now see the likes of capelin, sandlance, and pollock - a whole number of forage fish that are abundant in the sub-arctic - moving north into the Chukchi Sea and the Beaufort Sea.
"Guillemots, because they will be going out for the six-week period when the parents are raising young and feeding on whatever prey is there - they may be the first indicator of what's happening with these forage fish getting to the area.
"It's going to be very interesting to see what happens next. I've got all the guillemots banded - and have had since 1975 - and there could well be some sort of selection for birds that realise that the ice is not the future and turn to exploit sub-arctic prey. They would be the successful birds and one could get a sub-arctic guillemot on Cooper."
Posted by Peio at 1:13 AM