Vendee Globe : welcome to the Land of the Albatross


The first five have passed the Gate of Aiguilles.
The lead pack have now entered mythical seas.

There is a misconception that the Cape of Good Hope (Cape peninsula) is the southern tip of Africa, because it was once believed to be the dividing point between the Atlantic and Indian Oceans.
In fact, the southernmost point is Cape Agulhas, about 150 kilometres (90 mi) to the east-southeast.

A marker at Cape Agulhas indicates the official dividing line between the Atlantic and Indian oceans.
You are now at the southern-most tip of the continent of Africa

A place where tales can only be told by a few; tales of the albatross, the tinted grey light, the jet black mountainous savage seas, majestic icebergs and minefields of growlers, large semi-submerged chunks of solid, boat breaking ice.

The Agulhas Current flows along the southeastern coast of Africa from the Indian Ocean into the southern Atlantic Ocean.
It's well known for its treacherous winds, monster waves and shark-infested waters.
It also turns out to be an important site to study global climate.

The Cape of Good Hope 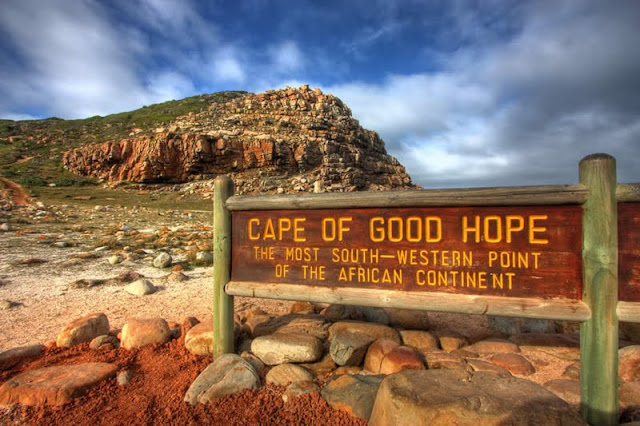