How much will our oceans warm and cause sea levels to rise this century? We’ve just improved our estimate

Knowing how much sea levels are likely to rise during this century is vital to our understanding of future climate change, but previous estimates have generated wide ranges of uncertainty.
In our research, published today in Nature Climate Change, we provide an improved estimate of how much our oceans are going to warm and its contribution to sea level rise, with the help of 15 years’ worth of measurements collected by a global array of autonomous underwater sampling floats.

Our analysis shows that without dramatic reductions in greenhouse gas emissions, by the end of this century the upper 2,000 metres of the ocean is likely to warm by 11-15 times the amount of warming observed during 2005-19.
Water expands as it gets warmer, so this warming will cause sea levels to rise by 17-26 centimetres.
This is about one-third of the total projected rise, alongside contributions from deep ocean warming, and melting of glaciers and polar ice sheets.

Ocean warming is a direct consequence of rising greenhouse gas concentrations in the atmosphere as a result of our burning of fossil fuels.
This results in an imbalance between the energy arriving from the Sun, and the energy radiated out into space.
About 90% of the excess heat energy in the climate system over the past 50 years is stored in the ocean, and only about 1% in the warming atmosphere.

Warming oceans cause sea levels to rise, both directly via heat expansion, and indirectly through melting of ice shelves.
Warming oceans also affect marine ecosystems, for example through coral bleaching, and play a role in weather events such as the formation of tropical cyclones.

Systematic observations of ocean temperatures began in the 19th century, but it was only in the second half of the 20th century that enough observations were made to measure ocean heat content consistently around the globe.

Since the 1970s these observations indicate an increase in ocean heat content.
But these measurements have significant uncertainties because the observations have been relatively sparse, particularly in the southern hemisphere and at depths below 700m.

To improve this situation, the Argo project has deployed a fleet of autonomous profiling floats to collect data from around the world.
Since the early 2000s, they have measured temperatures in the upper 2,000m of the oceans, and sent the data via satellite to analysis centres around the world.

These data are of uniform high quality and cover the vast majority of the open oceans.
As a result, we have been able to calculate a much better estimate of the amount of heat accumulating in the world’s oceans.

The global ocean heat content continued to increase unabated during the temporary slowdown in global surface warming in the beginning of this century.
This is because ocean warming is less affected than surface warming by natural yearly fluctuations in climate.

To estimate future ocean warming, we need to take the Argo observations as a basis and then use climate models to project them into the future.
But to do that, we need to know which models are in closest agreement with new, more accurate direct measurements of ocean heat provided by the Argo data.

The latest climate models, used in last month’s landmark report by the Intergovernmental Panel on Climate Change, all show ocean warming over the period of available Argo observations, and they project that warming will continue in the future, albeit with a wide range of uncertainties. 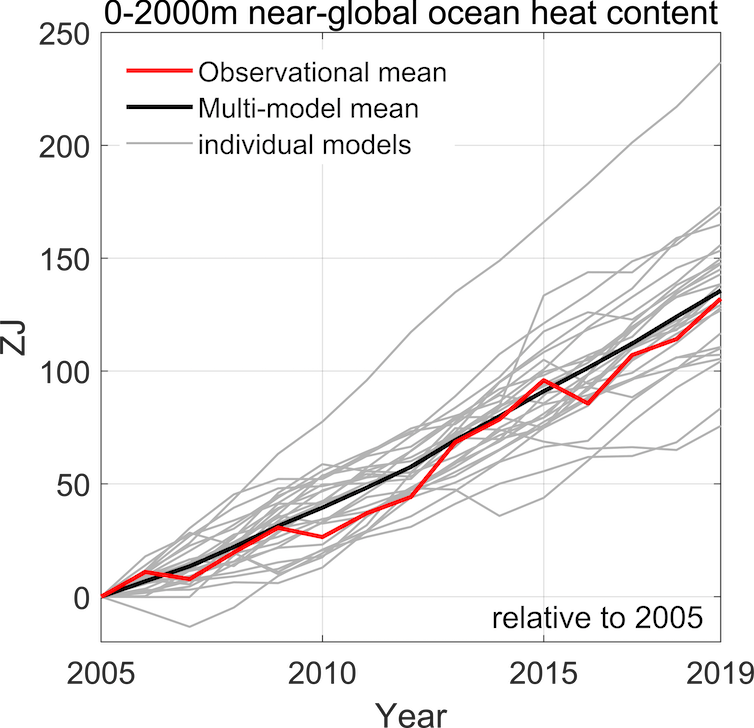 Ocean warming magnitudes from latest climate model simulations and Argo observations.
By comparing the Argo temperature data for 2005-19 with the simulations generated by models for that period, we used a statistical approach called “emergent constraint” to reduce uncertainties in model future projections, based on information about the ocean warming we know has already occurred.
These constrained projections then provided an improved estimate of how much heat energy will accumulate in the oceans by the end of the century.

By 2081–2100, under a scenario in which global greenhouse emissions continue on their current high trajectory, we found the upper 2,000m of the ocean is likely to warm by 11-15 times the amount of warming observed during 2005-19.
This corresponds to 17–26cm of sea level rise from ocean thermal expansion.

Climate models can also make predictions based on a range of different future greenhouse gas emissions.
Strong emissions reductions, consistent with bringing surface global warming to within about 2℃ of pre-industrial temperatures, would reduce the projected warming in the upper 2,000m of the ocean by about half — that is, between five and nine times the ocean warming already seen in 2005-19.

This would equate to 8-14cm of sea level rise due to thermal expansion.
Of course, reducing emissions so as to hit the more ambitious Paris target of 1.5℃ surface warming would reduce these impacts even further.
Other factors linked to sea levels

There are several other factors that will also drive up sea levels, besides the heat influx into the upper oceans investigated by our research.
There is also warming of the deep ocean below 2,000m, which is still under-sampled in the current observing system, as well as the effects of melting from glaciers and polar ice sheets.

This indicates that even with strong policy action to reduce greenhouse gas emissions, the oceans will continue to warm and sea levels will continue to rise well after surface warming is stabilised, but at a much reduced rate, making it easier to adapt to the remaining changes.
Cutting greenhouse gas emissions earlier rather than later will be more effective at slowing ocean warming and sea level rise.

Our improved projection is founded on a network of ocean observations that are far more extensive and reliable than anything available before.
Sustaining the ocean observing system into the future, and extending it to the deep ocean and to areas not covered by the present Argo program, will allow us to make more reliable climate projections in the future.
Links :
Posted by geogarage at 1:37 AM