The harsh history behind the internet's favorite sea shanty

From Mashable by Chris Taylor
No, "tonguing" doesn't mean what you think it means.
It's easy to see why "Soon May the Wellerman Come" became TikTok's first viral hit of 2021.
This jaunty 19th century earworm, sung so earnestly by a postman with a thick Scottish brogue, is perfect for remixing with multiple layers.
Though musicologists will tell you it's technically a ballad, "Wellerman" fits our concept of a sea shanty as snugly as a cable-knit sweater.
And shanties are perfect music for pandemic times.
We've spent months in isolation, yearning for the day when this ship of weirdness will reach the port of normalcy.
But at the risk of raining on the internet's fun, the cheeriness of the tune is deceptive.
"Wellerman" reveals a harsh history of exploitation and cruelty, hiding in plain sight in the lyrics.
For example, the original singers' awaited "sugar and tea and rum" not because they loved candy, caffeine, and booze, but because they generally didn't get actual money: This was their pay packet.
And as hilarious as "tonguing" sounds to us, it describes one of the worst jobs ever invented — stripping the blubber out of a rotting whale carcass.
No wonder they wanted to take their leave and go.
The right whale, or the whale right now ''South Sea Whale Fishery,' painted in 1836 — when the Wellerman company was most active.
Credit: Print Collector / Getty Images
It's hard to believe, in our everything-is-archived world, that such a catchy tune as "Wellerman" might easily have been lost forever.
The song hails from New Zealand, likely some time in the 1830s.
We only have it because a 1960s musician named Neil Colquhoun was in the habit of recording old folk tunes; this was one he heard from a man in his 80s, who'd learned it from his uncle.

Colquhoun first published the song in 1965; by sheer coincidence, this was the same year New Zealand banned whaling.

Thus ended a horrific form of hunting that began in 1791, when British ships bringing convicts to Australia started harpooning whales near New Zealand on their way home.
(New Zealand's original settlers, the Maori, generally used whales that had been washed ashore rather than hunting them.)
Whale oil was a foul-smelling thing, but its usefulness in lamps, candles, soap, food and industrial lubricants outweighed the odor.
Whale bone was a sturdy material that could be thinly sliced and was used in brushes, corsets and especially umbrellas, before steel was a thing.
In short, there was money in them thar whales. 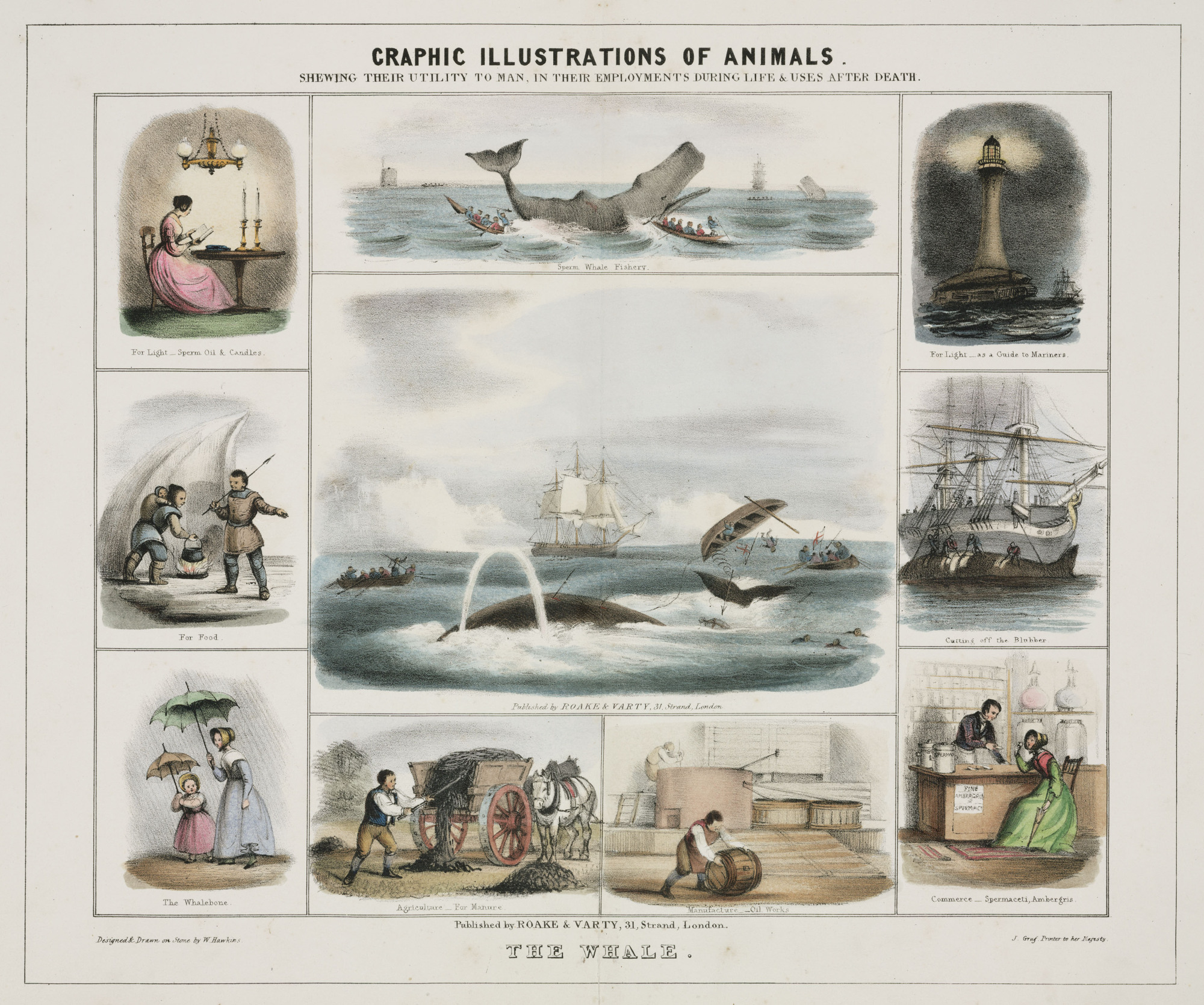 An illustration for an 1845 book shows all the ways whale oil was used.
Credit: SSPL Via Getty Images
Anyone who has read Herman Melville's Moby-Dick (1851), or was forced to read it at school, has learned that whale oil was as "rare as the milk of queens."
They also learned that whalers could literally be driven mad or drowned in pursuit of their giant quarry, and that New Zealand — mentioned a dozen times in Melville's book — was one of the centers of this global trade.
Here in the 1830s, dozens of lonely whaling station teams hunted southern right whales, which could yield 75 barrels of whale oil each.

The prices varied wildly from place to place, but in the U.S.
that much whale oil could net you at least $150,000 in today's money, not counting the whale bone.
That might help explain why the Billy o' Tea, the ship in the verses of "Wellerman," spent two weeks looking for a right whale and more than 40 days trying to kill the thing.

The Billy o' Tea — a "Billy" is a pot used for heating water — appears to be a fictional ship.

The listener is left to wonder whether this is a whaler's tall tale or, like Moby-Dick, a metaphor for human hubris.
Can a captain really spend 40 days getting pulled around by a whale his crew harpooned, losing four other vessels in the process?
Melville's Captain Ahab might have something to say about that.

When the Wellerman came 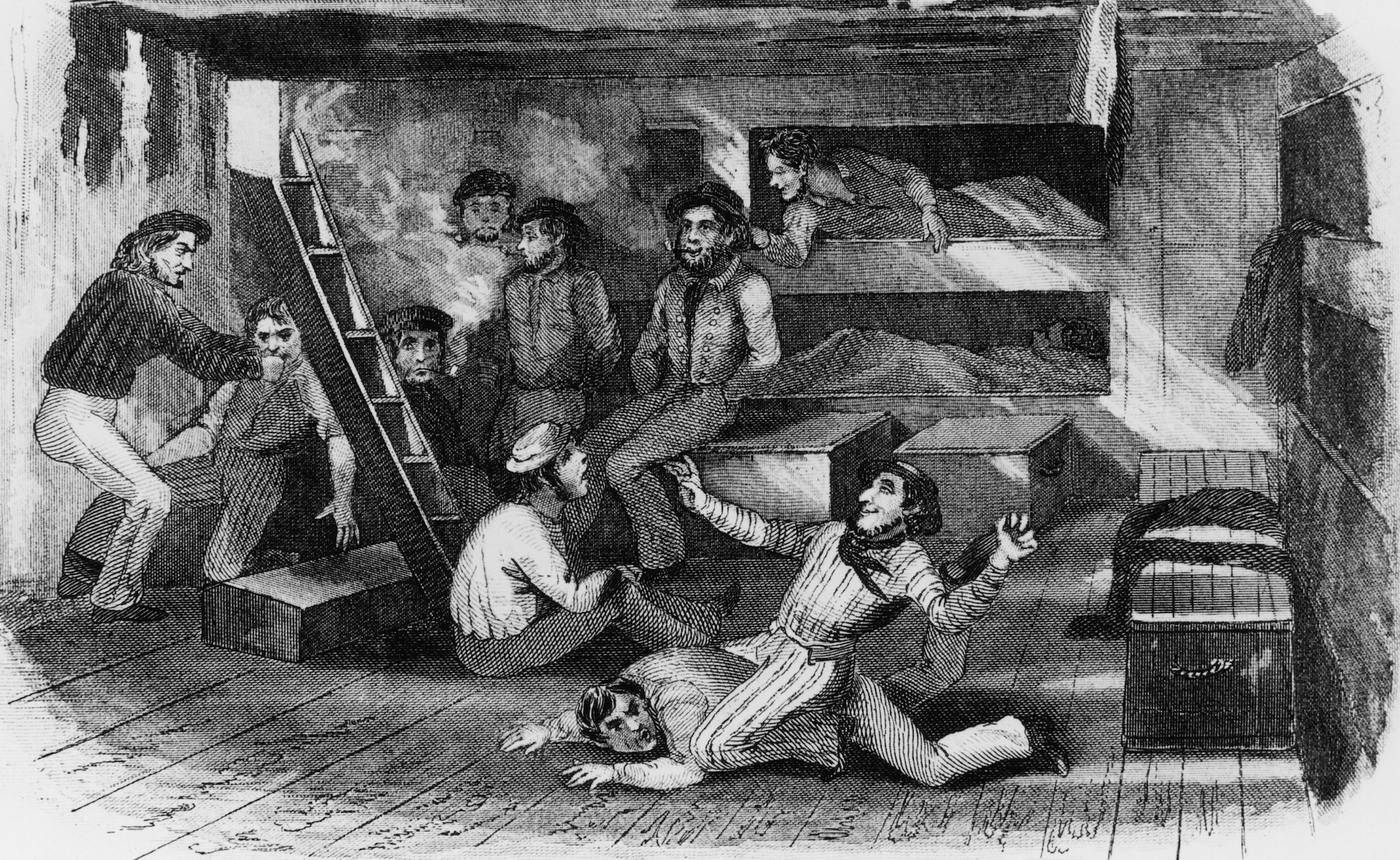 An engraving of life aboard a whaling ship, circa 1850 Credit: Fotosearch / Getty Images
So who was the Wellerman in the song, then, who arrives like a deus ex machina to supply the Billy o' Tea?
Why, he was literally the man from Weller — as in Weller Bros., one of the earliest whaling and trading companies to make a fortune in New Zealand and Australia.
Mellville actually worked on one of their ships in 1842, meaning that for one brief moment the author of Moby-Dick was a Weller man.
Company founder Joseph Weller was an expat Brit, a wealthy landowner from Kent.
He took his family to Australia in the hope it would improve his health; he had a lifelong struggle with tuberculosis.
On arrival, Weller and his three sons got into the trading game, and in 1831 they founded remote Otago whaling station on New Zealand's south island.
If there was any particular location for a group of shanty singers to be doing the hated tonguing, it was Otago.
The Wellers were doing a brisk trade, bringing in about 300 right whales per season and employing 80 people.
But for as little as they paid in actual wages, they also paid a high personal price.
In 1832 a Maori raiding party burned down Otago station for reasons unknown — possibly because the Wellers hadn't consulted the locals before blundering onto their land — and holding Joseph's son Edward hostage until dad paid up.
Joseph rebuilt Otago in 1833, but lost his battle with tuberculosis there in 1835; his body was shipped back to Sydney in a cask of rum.
(Presumably that was one cask not later used to pay his employees.)
Edward Weller left Otago in 1840, never to return.
The number of right whales began to decline.
The Weller company went bankrupt shortly afterwards.
Otago continued as a supply station for other whaling companies, which had started to shift focus to more lucrative and long-distance hunts for sperm whales.
Edward reportedly died in a flood in New South Wales in 1893.
What was left of their greedy, invasive, abusive, whale-slaughtering enterprise?Merely a song, invented by their roughneck employees, passed down generation to generation.
"Wellerman" was recorded a dozen times since Colquhoun captured the song — most recently by The Longest Johns, whose version inspired the TikTok perfomance.
No doubt the Wellers would be delighted to know their name has been immortalized on a global network where songs are shared and re-sung.

But context is key.
So the next time you hit play on a version of "Wellerman," take a moment to remember the gruesome whale oil business it describes.
Perhaps one day shanties will be sung about modern-day oil companies that are even more damaging to the environment; a rapidly warming planet would certainly be better off if they would take their leave and go.