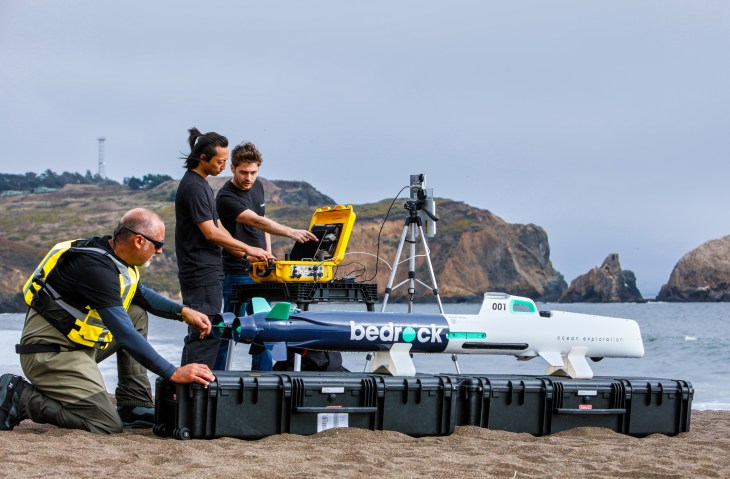 The push for renewable energy has brought offshore wind power to the forefront of many an energy company’s agenda, and that means taking a very close look at the ocean floor where the installations are to go.
Fortunately Bedrock is here to drag that mapping process into the 21st century with its autonomous underwater vehicle and modern cloud-based data service.

The company aims to replace the standard “big ship with a big sonar” approach with a faster, smarter, more modern service, letting companies spin up regular super-accurate seafloor imagery as easily as they might spin up a few servers to host their website.

“We believe we’re the first cloud-native platform for seafloor data,” said Anthony DiMare, CEO and cofounder (with CTO Charlie Chiau) of Bedrock.
“This is a big data problem — how would you design the systems to support that solution? We make it a modern data service, instead of like a huge marine operation — you’re not tied to this massive piece of infrastructure floating in the water. Everything from the way we move sonars around the ocean to the way we deliver the data to engineers has been rethought.”

The product Bedrock provides customers is high-resolution maps of the seafloor, made available via Mosaic, a familiar web service that does all the analysis and hosting for you — a big step forward for an industry where “data migration” still means “shipping a box of hard drives.”

Normally, DiMare explained, this data was collected, processed, and stored on the ships themselves.
Since they were designed to do everything from harbor inspections to deep sea surveys, they couldn’t count on having a decent internet connection, and the data is useless in its raw form.
Like any other bulky data, it needs to be visualized and put in context. 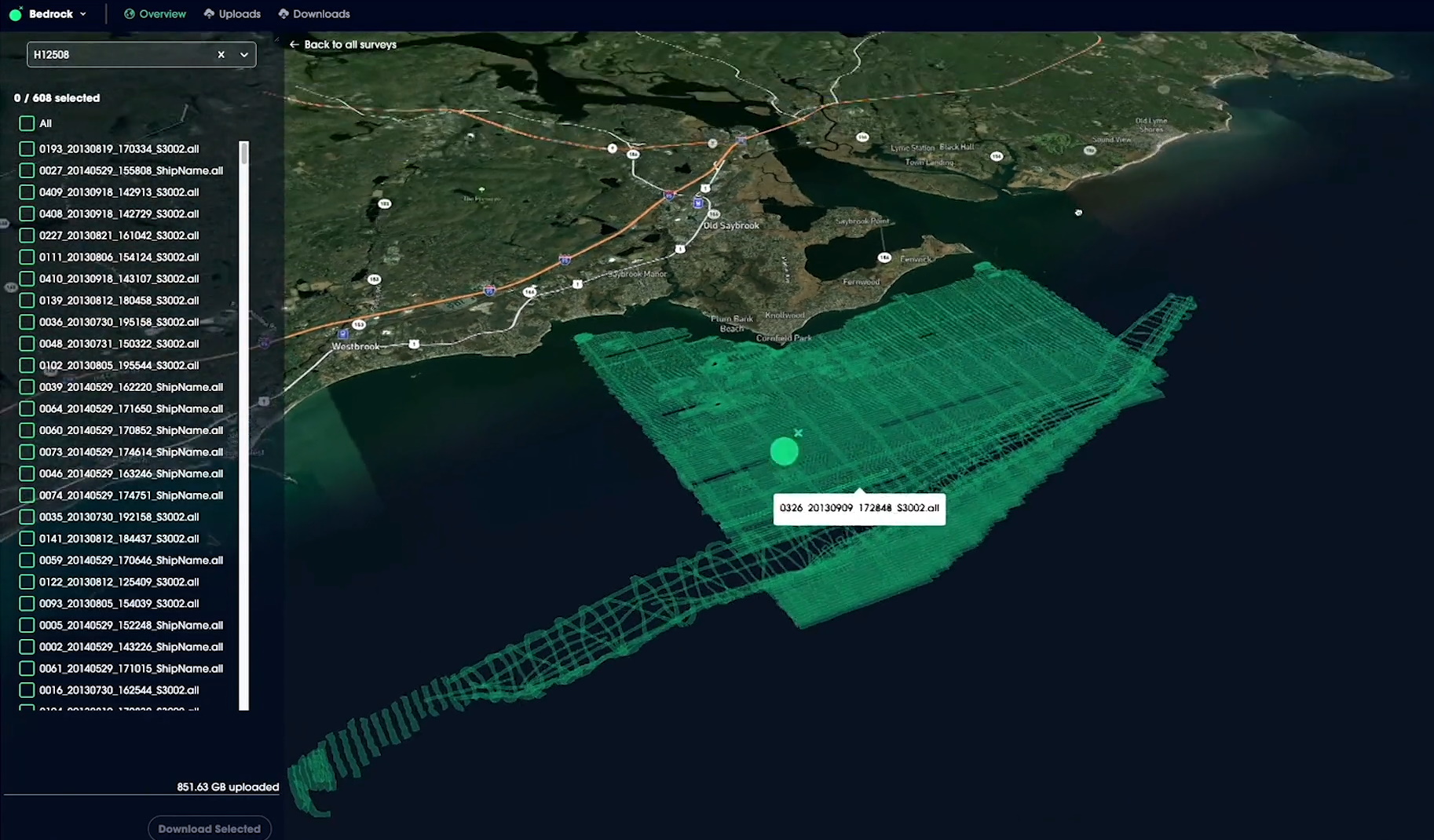 The current market is more focused on detailed, near-shore data than the deep sea, since there’s a crush to take part in the growing wind energy market.
This means that data is collected much closer to ordinary internet infrastructure and can be handed off for cloud-based processing and storage more easily than before.
That in turn means the data can be processed and provided faster, just in time for demand to take off.

As DiMare explained, while there may have been a seafloor survey done in the last couple decades of a potential installation site, that’s only the first step.
An initial mapping pass might have be made to confirm the years-old maps and add detail, then another for permitting, for environmental assessments, engineering, construction, and regular inspections.
If this could be done with a turnkey automated process that produced even better results than crewed ships for less money, it’s a huge win for customers relying on old methods.
And if the industry grows as expected to require more active monitoring of the seafloor along every U.S. coast, it’s a win for Bedrock as well, naturally. 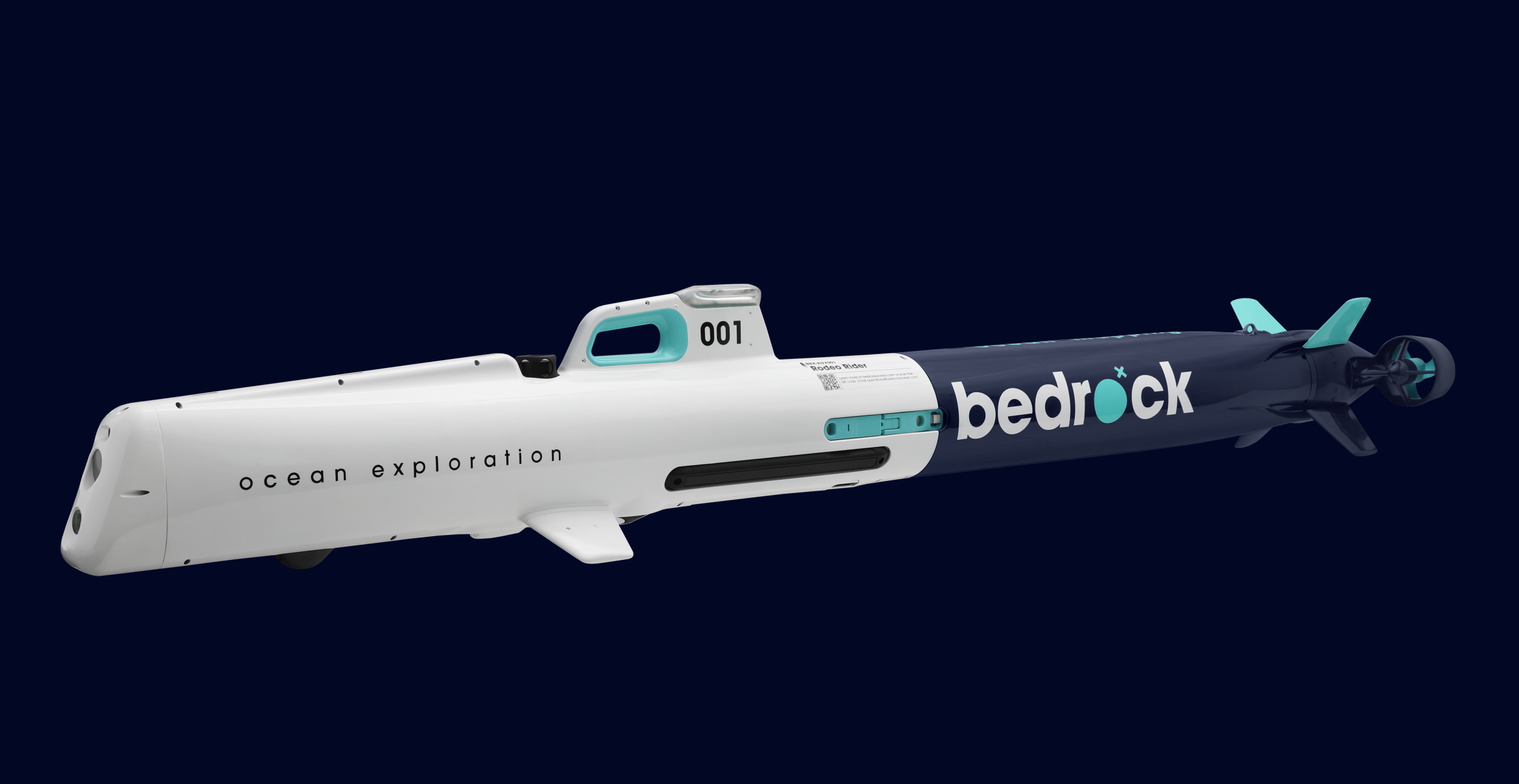 Image Credits: Bedrock
To make this all happen, of course, you need a craft that can collect the data in the first place.
“The AUV is a piece of technology we built solely to enable a data product,” said DiMare, but noted that, originally, “we didn’t want to do this.”

“We started to spec out what it looked like to use an off the shelf system,” he explained.
“But if you want to build a hyper-scalable, very efficient system to get the best cost per square meter, you need a very specific set of features, certain sonars, the compute stack… by the time we listed all those we basically had a self-designed system. It’s faster, it’s more operationally flexible, you get better data quality, and you can do it more reliably.”

And amazingly, it doesn’t even need a boat — you can grab it from the back of a van and launch it from a pier or beach.

“From the very beginning one of the restrictions we put on ourselves was ‘no boats.’ And we need to be able to fly with this thing. That totally changed our approach,” said DiMare. 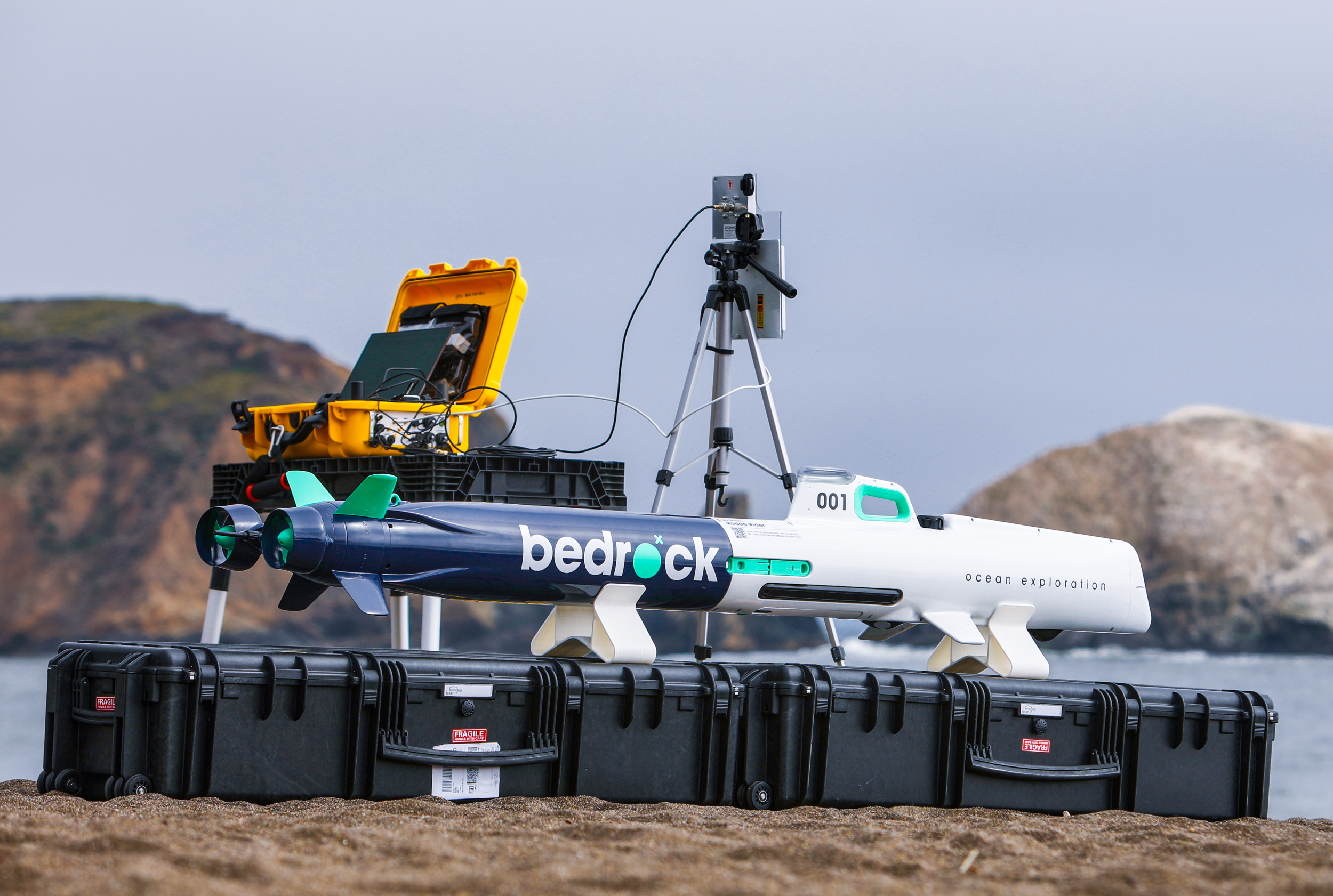 Image Credits: Bedrock
The AUV packs a lot into a small package, and while the sensor loadout is variable depending on the job, one aspect that defines the craft is its high-frequency sonar.

Sonars operate in a wide range of frequencies, from the hundreds to the hundreds of thousands of hertz. Unfortunately that means that ocean-dwelling creatures, many of which can hear in that range, are inundated with background noise, sometimes to the point where it’s harmful or deters them from entering an area.
Sonar operating about 200 kHz is safe for animals, but the high frequency means the signal attenuates more quickly, reducing the range to 50-75 meters.

That’s obviously worthless for a ship floating on the surface — much of what it needs to map is more than 75 meters deep.
But if you could make a craft that always stayed within 50 meters of the seabed, it’s full of benefits. And that’s exactly what Bedrock’s AUV is designed to do.
The increased frequency of the sonar also means increased detail, so the picture its instruments paint is better than what you’d get with a larger wave.
And because it’s safe to use around animals, you can skip the (very necessary but time-consuming) red tape at wildlife authorities.
Better, faster, cheaper, and safer is a hell of a pitch.

Today marks the official launch of Mosaic, and to promote adoption Bedrock is offering 50 gigs of free storage — of any kind of compatible map data, since the platform is format-agnostic.

There’s a ton of data out there that’s technically “public” but is nevertheless very difficult to find and use.
It may be a low-detail survey from two decades ago, or a hyper-specific scan of an area investigated by a research group, but if it were all in one place it would probably be a lot more useful, DiMare said.
“Ultimately we want to get where we can do the whole ocean on a yearly basis,” he concluded. “So we’ve got a lot of work to do.”
Links :
Posted by geogarage at 1:43 AM