Boom in ships that fly ‘fake’ flags and trash the environment 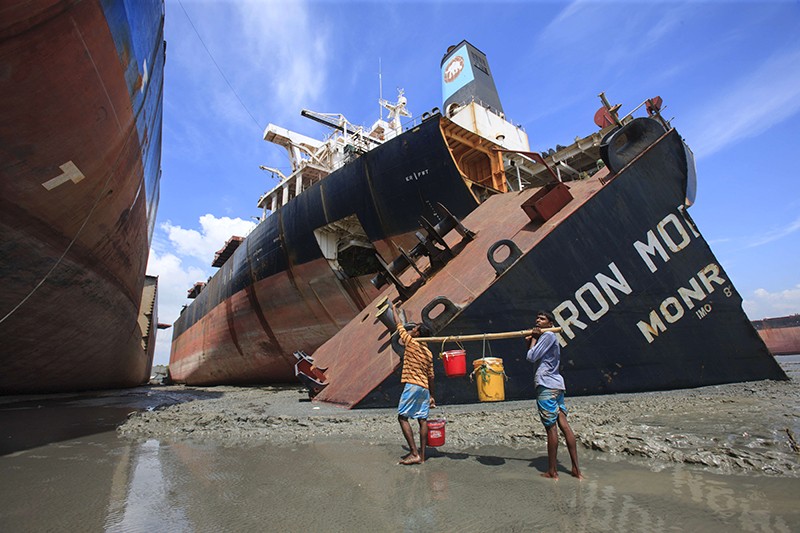 Workers toil to dismantle huge vessels at a ship-breaking yard in Bangladesh.
Credit: Yousuf Tushar/LightRocket via Getty
From Nature by Quirin Schiermeier

The number of ships using a ‘flag of convenience’ loophole that allows them to be scrapped in a place with lax environmental regulations is skyrocketing.

Ships transport 90% of the world’s traded cargo, so are crucial to the global economy.
But when tankers and other large vessels are demolished, they generate huge amounts of marine pollution, particularly if it happens in countries where environmental regulations for ship-breaking yards are lax.

Research now shows1 that the number of vessels misleadingly registered to nations other than their true country of origin — called flags of convenience — has skyrocketed since 2002.
The practice allows ship owners from nations with strict environmental regulations to have their vessels dismantled cheaply — but often in a way that is very damaging to the environment.

Business owners in wealthy nations, including members of the European Union as well as the United States, South Korea and Japan, control the large majority of the world cargo and tanker fleet.
But an analysis of scrapping records from commercial maritime data providers reveals that between 2014 and 2018, 80% of these ships were demolished in just 3 nations, where shipyards are governed by weak environmental, labour and safety regulations — Bangladesh, India and Pakistan (see ‘Playing the system’). 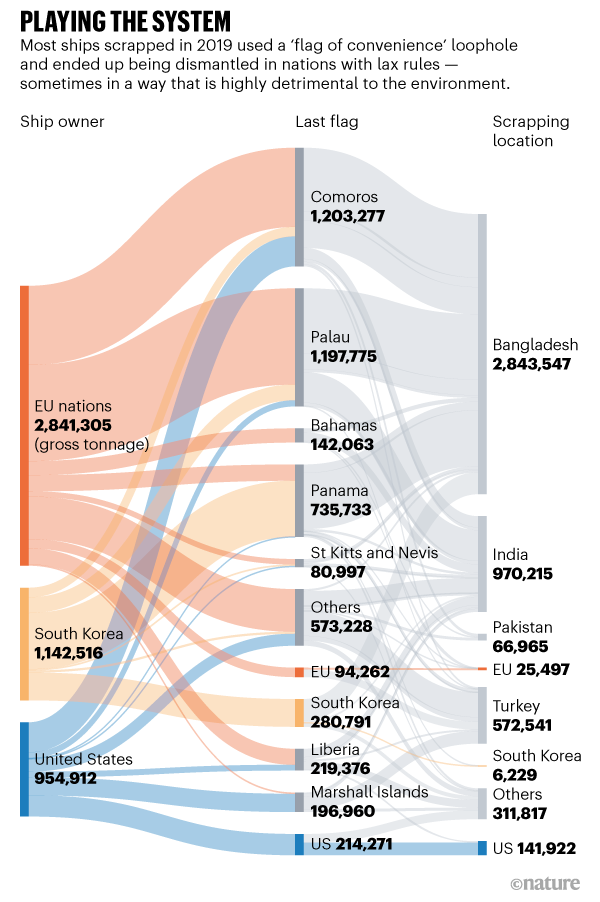 Source: Z. Wan et al. Mar. Pol. 130, 104542 (2021)
Poor environmental regulation
The study reveals that the use of flags of convenience has become the default among business owners in the EU over the past few decades.
Strict EU regulations require all ships registered in EU countries to be recycled at yards approved by the European Commission, but when ships are flagged outside the EU, their owners can evade regulations.

Countries are responsible for enforcing international and regional safety and environmental rules on ships registered under their flags — but some flag-of-convenience nations are known not to do so. Between 2002 and 2019, the proportion of EU-nation-owned ships registered in low-income countries rose from 46% to 96%, the study finds.

By registering ships abroad, owners can also escape taxes and operate substandard vessels.
Between 2002 and 2019, the top flags of convenience shifted from Panama and Liberia to two small island countries, Comoros and Palau, which will issue flags for a fee, without proper regulations.
Failure of maritime rules

International treaties — including the 1992 Basel Convention to prevent transfer of hazardous waste from developed to less developed countries, and the 2009 Hong Kong Convention for the safe and environmentally sound recycling of ships — are woefully ineffective with regard to preventing environmental injustice, says study author Zheng Wan, a transport researcher at Shanghai Maritime University in China who led the analysis.

Ship-scrapping in low-income countries comes with fatal health risks and severe environmental pollution, including releases of mercury, lead, asbestos, ozone-depleting substances and pesticides into the soil and sea.
One study2 estimates that by 2027, almost 5,000 workers in ship-recycling yards in India will have died from mesothelioma, a malignant tumour caused by inhaling asbestos.

“Business practices are rendering many international treaties and regional regulations unenforceable because ‘flags of convenience’ nations tend to have little interest in regulation,” says Wan.
“In addition, workers’ health is always ignored by low-income nations that perform the ship-breaking.”

“It is immoral if ship owners in wealthy developed countries are circumventing international conventions and potentially exposing workers in low-income countries to serious harm,” adds John Cheerie, a workplace-health researcher at the Institute of Occupational Medicine in Edinburgh, UK.
“It is important for the international community to address this issue and eliminate loopholes,” he says.
doi: https://doi.org/10.1038/d41586-021-01391-3
Posted by geogarage at 1:44 AM