Solid sail and mast to be installed for validation in France

Solid Sail tested on Imoca 60 Yes We Cam with Jean Le Cam skipper /
photo Bernard Biger, Chantiers de l'Atlantique
Developed from an R&D program begun in 2008, the sail is an innovative application of composite materials and a rigging system that has been tested on a smaller scale aboard Jean Le Cam’s sailboat as well in trials with Ponant.
The promising technology has also drawn interest from large ship operators including MSC.
As the next step in the technical validation necessary to commercialize the Solid Sail/AeolDrive solution for large ships, the shipyard will install prototypes of the system for testing at the shipyard.
In the fall of 2021, they will install a 125-foot-tall mast that deploys a 550 m² (657 yd²) sail and that will be followed by a full-scale model standing 311 feet in height in 2022 with a 1,200 m² (1,435 yd²) Solid Sail.
The centerpiece of the system, the rigging named AeolDrive – a mast tiltable through 70°, which is a balestron rigging able to rotate through 360° permitting the vessel to remain on course without the maneuvering traditionally required by a sailing ship.
The new test masts will be extending the previous 1 to 5 scale prototype which was tested for two years on a pier in Pornichet harbor.
A system of force and position sensors will enable the aerodynamic and kinematic performances of the assembly to be evaluated while monitoring the stress levels in the mechanical elements. 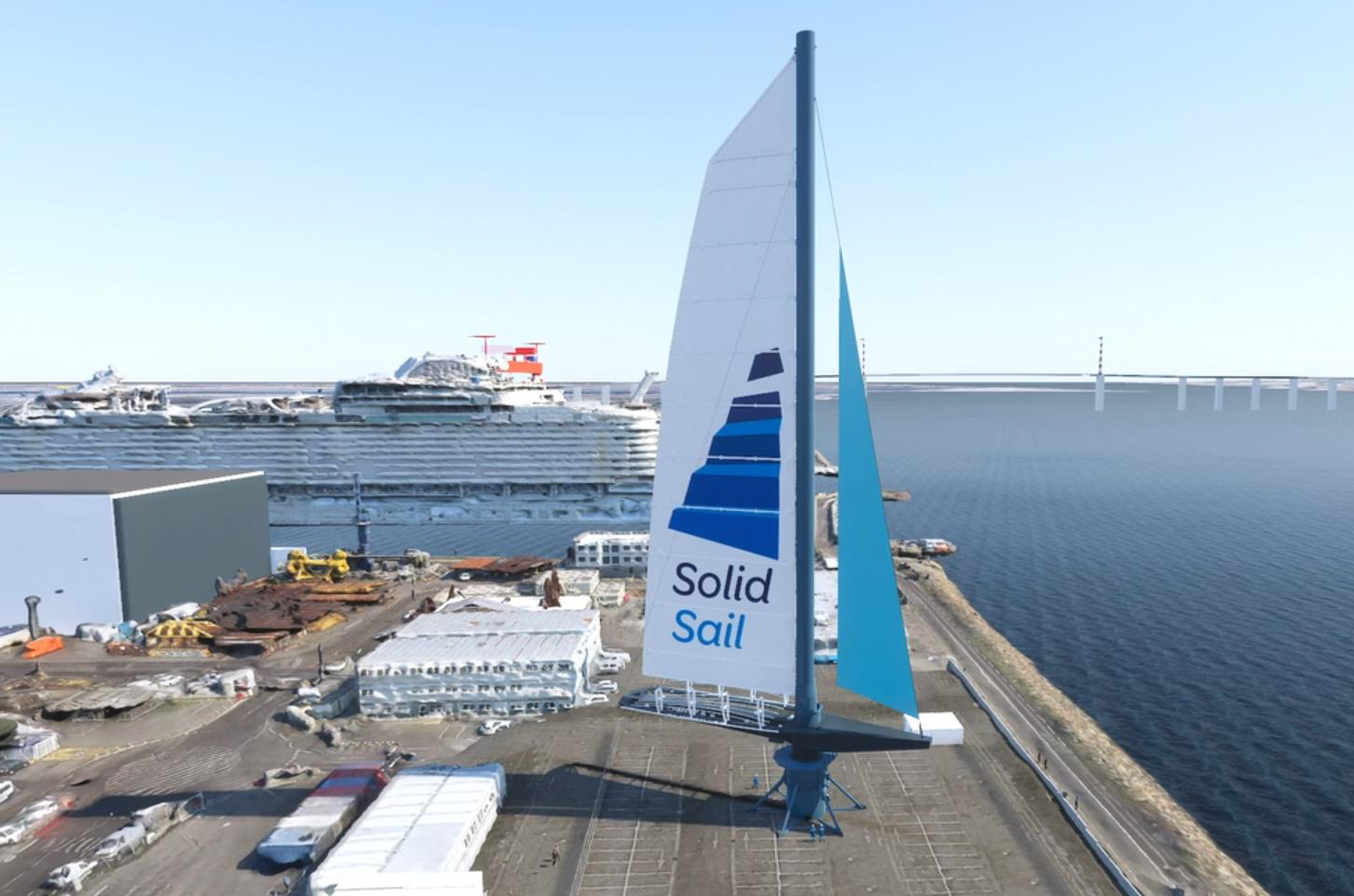 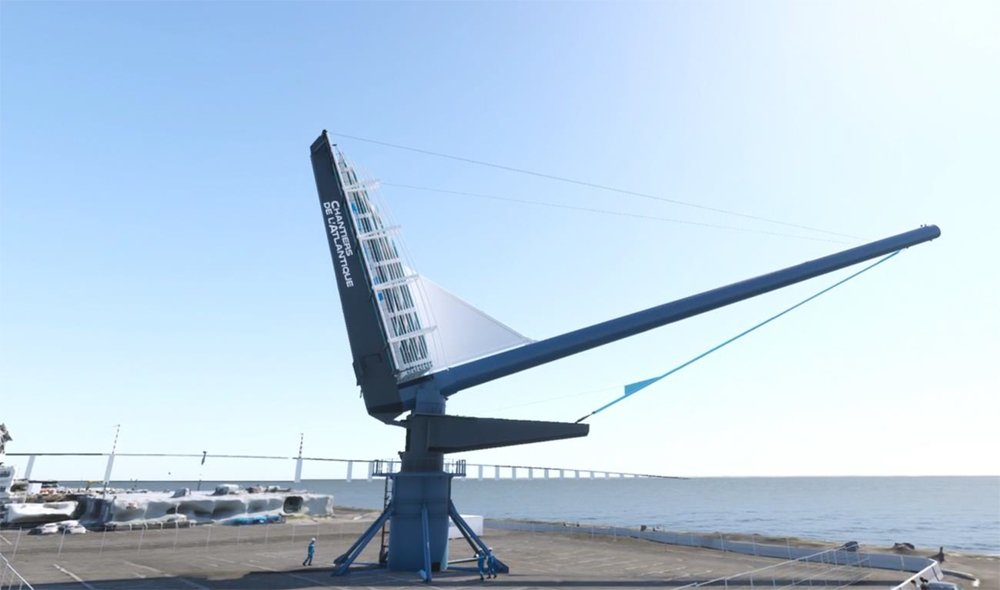 Testing the prototype designs (Chantiers de l'Atlantique)
According to the shipyard, the mast will be one of the highest composite masts in the world made of unique carbon fibers. The sail membrane is made of fiberglass with the textile bonds between the panels made of Dyneema (a fiber 15 times as strong as steel).
The unique materials used for the solid sails permit them to be larger than anything possible for the historic fabric sails and the use of rectangular panels facilities the automatic lowering and raising of the sails.
The lifespan of the solid sail is projected to be five times that of conventional sails.
Chantiers de l’Atlantique says that the first commercial application for the Solid Sail/AeolDrive solution is destined to a 200 m (655 ft) long cruise ship.These ships will use both sails and an engine for propulsion, achieving a 50 percent reduction in greenhouse gas emissions.
Other applications that they are considering are cargo ships and large pleasure boats. 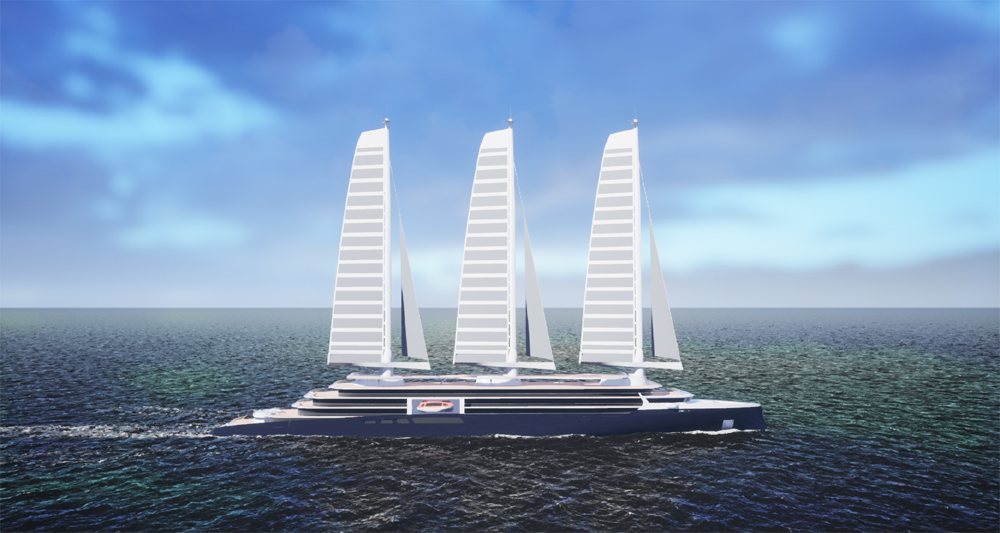 Concept design (Chantiers de l'Atlantique)
The Solid Sail/AeolDrive solution is the fulfillment of a cooperative work between Chantiers de l’Atlantique and its industrial partners.
They are from Brittany (Multiplast, AvelRobotics, SMM Technologies, CDK Technologies, Lorima, G SEA Design, Blew Stoub, Ocean Data System, Pixel Sur Mer and Awentech) for the mast and the sail, and Pays de la Loire (MECA, Wichard, Nov-BLM, Lancelin, Baudin Chateauneuf and PL Marine) for the fitting equipment.
With the support of the regions Brittany and Pays de la Loire and of the local authority of Lorient and Vannes, genuine technological and industrial sectors sprouted around this innovative concept.
Additionally, Solid Sail/AeolDrive received support from the ERDF (European Regional Development Fund), the Pôle Mer Bretagne Atlantique (Brittany Atlantic Sea Pole), and from the PIA (Programme d’Investissement d’Avenir – Investment Program for the Future) operated by ADEME, the French Energy Management Agency, as well as funds from the 2020 European Research and Innovation Program (LeanShips project).

From a scientific and academic point of view, the project was led in association with the TRI Jules Vernes, the ENSTA Bretagne (Grande École of engineering), and the Catholic Institute of Arts and Crafts of the West Coast.