Why the U.K. and EU are fighting over fish 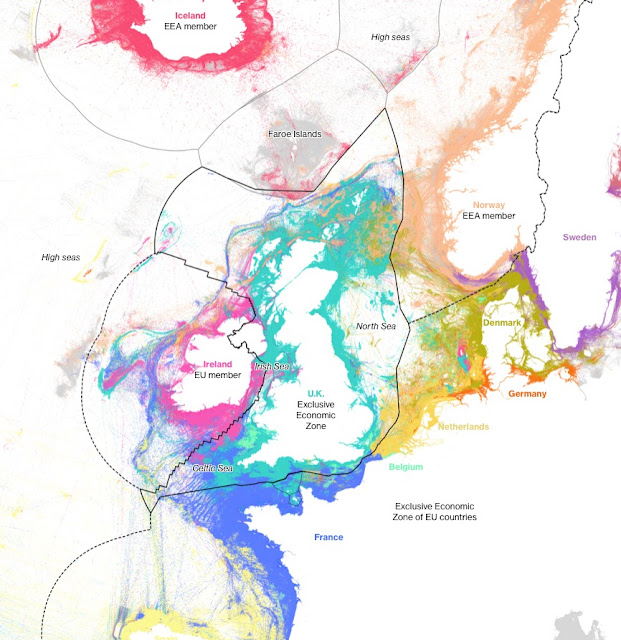 Domicile of vessel with the greatest fishing intensity in 2016
Source: Global Fishing Watch

From Bloomberg by Hayley Warren and Ian Wishart

After nine months, the U.K.’s trade talks with the European Union came down to the rights of fishing boats from EU countries to catch in British waters.
Both sides want to keep fish flowing across borders and avoid clashes between ships at sea, and the EU wants to maintain its access to waters vital to its commercial fishing industries for years to come.

“On fisheries the discussion is still very difficult,” said European Commission President Ursula von der Leyen to the European Parliament.
“In all honesty it sometimes feels that we will not be able to resolve this question.”

While a member of the EU, the U.K. had to divide up its waters as part of the Common Fisheries Policy.
But the British have long said this unfairly restricted its own industry.
The EU didn’t question the U.K.’s right to control its seas but insisted that, in return for a trade deal and access to the bloc’s single market, it should continue to give vessels from countries like France, Netherlands and Belgium a large share of the catch.

This video shows fishing effort (as time at location over 3 months) estimated by Global Fishing Watch in selected Marine Protected Areas in the UK Exclusive economic Zone around Scotland from 2012 to 2020.

Shared Waters
The talks focused on what’s called the Exclusive Economic Zone, the sea between 12 and as much as 200 nautical miles from the British coast.
A section between 6 and 12 miles also formed part of the discussion because European vessels, particularly those from France, have had access there for centuries, although it didn’t formally come under EU jurisdiction.

There are some precedents for countries outside the EU having agreements on fisheries with the bloc.
The EU has bilateral arrangements with Norway and the Faroe Islands, for example, in order to jointly manage fish stocks and allow European fishermen to work in their waters.

Norway reached a bilateral framework agreement on fisheries cooperation with the U.K.
in September.
The country, which has a free-trade deal with the EU as part of its membership of the European Economic Area, has said it may close its waters to fishing vessels from the European Union and the U.K. on Jan. 1 if a deal between the three parties isn’t concluded by the end of the month.

The EU’s Common Fisheries Policy, which sets out catch limitations for each country, was established to address the steep decline in ﬁsh stocks in the world’s fourth largest ﬁsh producing area, and the world’s highest in value.

EU fisheries ministers set limits, known as the total allowable catch, for each species, on an annual basis in negotiations that often last well into the night.
The idea is that each country should receive a ﬁxed share over a long period of time.
The catch limits are revised each year and can be traded. 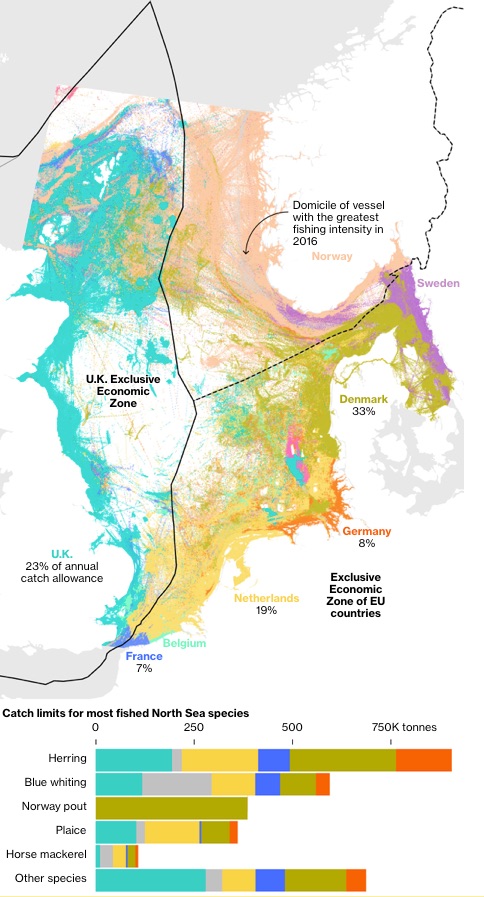 Other species
Note: Catch limits for zones IVa, IVb, IVc.
Share of catch based on available data.
Sources: European Commission, Global Fishing Watch
The U.K. wanted to change the way fish stocks were calculated to use a formula called “zonal attachment,” which the government said gave a much more accurate picture of where fish are now, rather than the EU’s model based on data from the 1970s.

The EU opposed Britain’s efforts to make access and quota numbers dependent on annual negotiations because it said that would damage the stability of the European industry.

According to officials close to the negotiations, the U.K. on Friday rejected an EU offer that would see the bloc lose around 25% of the current 650 million euros ($795 million) of fish caught annually in British waters.
The U.K. is pushing the reduction to be closer to 60%, according to the officials who spoke on condition of anonymity.

To put that into context, the negotiations are snagged over fishing rights equivalent to about 0.1% of U.K. gross domestic product.
The British government’s own analysis in 2018 suggested the economy will be at least 2.6% smaller in 15 years’ time if there’s no trade deal.