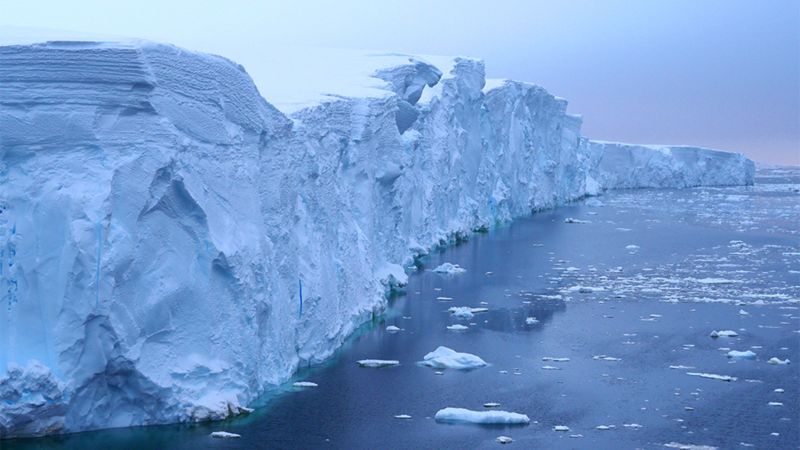 There is going to be a gap of several years in our ability to measure the thickness of ice at the top and bottom of the world, scientists are warning.
The only two satellites dedicated to observing the poles are almost certain to die before replacements are flown.
This could leave us blind to some important changes in the Arctic and the Antarctic as the climate warms.

The researchers have raised their concerns with the European Commission and the European Space Agency.
A letter detailing the problem - and possible solutions - was sent to leading EC and Esa officials this week; and although the US space agency (Nasa) has not formally been addressed, it has been made aware of the correspondence.

At issue is the longevity of the European CryoSat-2 and American IceSat-2 missions.
These spacecraft carry instruments called altimeters that gauge the shape and elevation of ice surfaces.
They've been critical in recording the loss of sea-ice volume and the declining mass of glaciers. 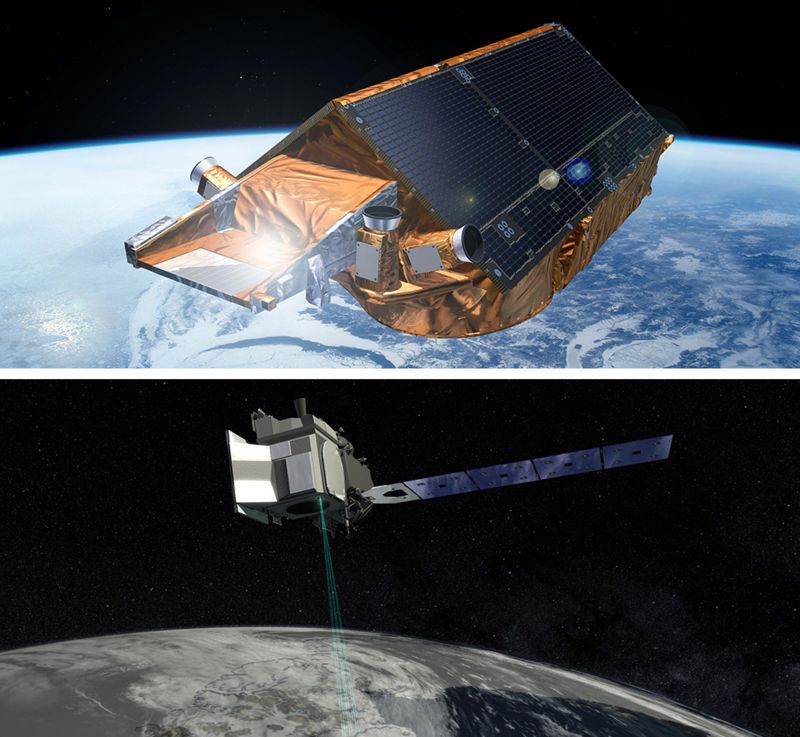 Image copyright ESA/NASA
image captionArtwork: CryoSat-2 (top) and IceSat-2 (bottom) will hopefully last until mid-decade
What's unique about the satellites is their orbits around the Earth.
They fly to 88 degrees North and South from the equator, which means they see the entire Arctic and Antarctic regions, bar a small circle about 430km in diameter at the poles themselves.

In contrast, most other satellites don't usually go above 83 degrees.
As a consequence, they miss, for example, a great swathe of the central Arctic Ocean and its frozen floes.

The worry is that CryoSat-2 and IceSat-2 will have been decommissioned long before any follow-ups get launched.

CryoSat-2 is already way beyond its design life. It was put in space in 2010 with the expectation it would work for at least 3.5 years.
Engineers think they can keep it operating until perhaps 2024, but battery degradation and a fuel leak suggest not for much longer.

IceSat-2 was launched in 2018 with a design life of three years, but with the hope - and expectation - it can operate productively deep into the decade. 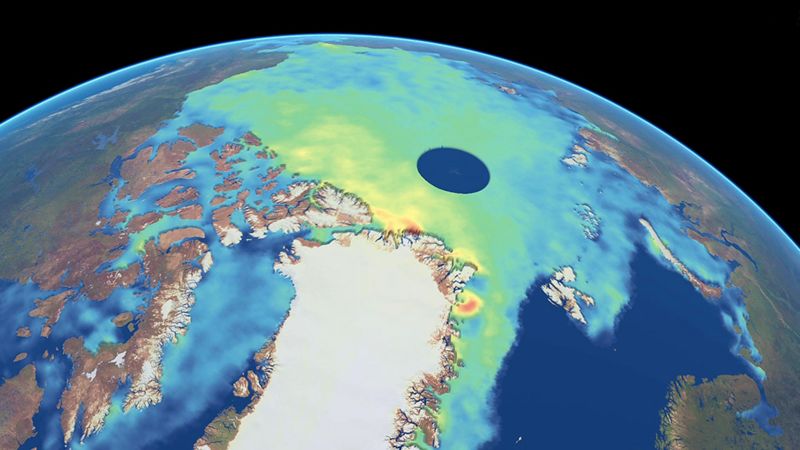 The satellites' orbits leave only a very small hole in their measurements at the poles
ESA
"Without successful mitigation, there will be a gap of between two and five years in our polar satellite altimetry capability," the scientists' letter states."
This gap will introduce a decisive break in the long-term records of ice sheet and sea-ice thickness change and polar oceanography and this, in turn, will degrade our capacity to assess and improve climate model projections."

The only satellite replacement currently in prospect is the EC/Esa mission codenamed Cristal.
It will be like Cryosat, although with much greater capability thanks to a dual-frequency radar altimeter.

Industry has started work on the spacecraft but it won't launch until 2027/28, maybe even later because full funding to make this date a reality is not yet in place.

Dr Josef Aschbacher, the director of Earth observation at Esa, said his agency was working as fast as it could to plug the gap.
"This is a concern; we recognise it," he told the BBC. "We've put plans in motion to build Cristal as quick as we can. Despite Covid, despite heavy workloads and video conferences by everyone - we have gone through the evaluation... and Cristal was kicked off in early September." 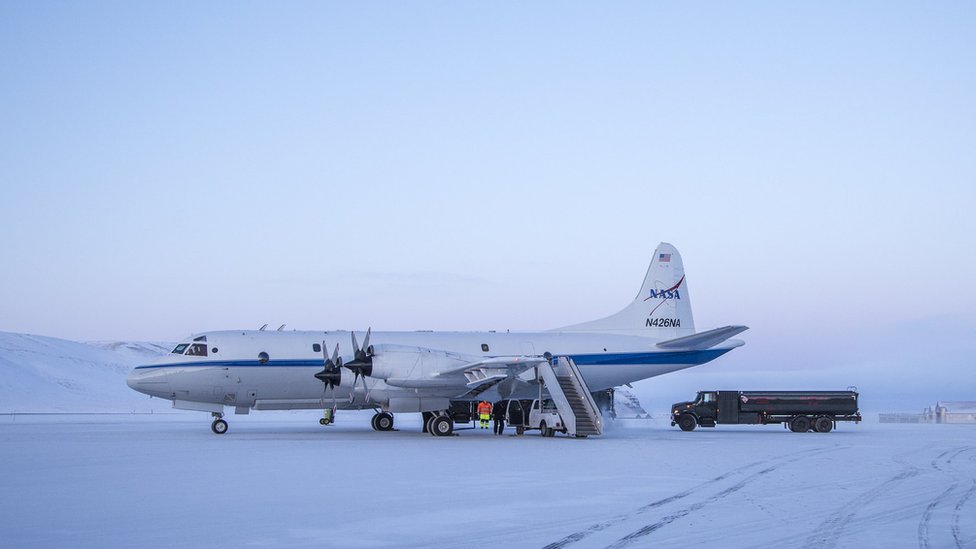 IMAGE COPYRIGHTNAS Aimage caption An option for Europe?
The Americans flew a stop-gap laser altimeter on aeroplanes
Just over 10% of the near-600 signatories to the letter are American scientists.

Dr Thomas Zurbuchen, the head of science at Nasa, is not being sent the letter because it is primarily aimed at European funders - and most of the signatories are European.
Nonetheless, Dr Zurbuchen is aware of the letter and its contents.
He said he was hopeful any polar gap could be plugged or minimised.
"I think there are multiple options at this moment in time that we can deploy to that end, in partnership or otherwise," he commented.

One of those solutions in Europe would be to run a version of Nasa's IceBridge project.

This was an airborne platform that the US agency operated in the eight years between the end of the very first IceSat mission in 2010 and the launch of IceSat-2 in 2018.

An aeroplane flew a laser altimeter over the Arctic and the Antarctic to gather some limited data-sets that could eventually be used to tie the two IceSat missions together.

There are many who think a European "CryoBridge" is the most affordable and near-term option to mitigate the empty years between CryoSat-2 and Cristal.

The cost of manufacture of the airborne radar altimeter could be accomplished for perhaps €5m (£4.5m), scientists believe, but its design and fabrication would likely take two years.
Such a project would therefore have to get under way relatively soon.
It would, of course, also need an operational budget.

The signatories to the letter sent to the EC and Esa include leading scientists using CryoSat and IceSat data, the president of the International Glaciology Society, and lead authors on the United Nations' Intergovernmental Panel on Climate Change, which prepares the authoritative state-of-the-climate reports for world governments.
Links :
Posted by geogarage at 12:40 AM