Since the time of Charles Darwin, scientists have marveled at sea turtles' impressive ability to make their way—often over thousands of kilometers—through the open ocean and back to the very places where they themselves hatched years before.
Now, researchers reporting in the journal Current Biology on July 16 have evidence that the turtles pull off these impressive feats of navigation with only a crude map to guide them on their way, sometimes going far off course before correcting their direction.

"By satellite tracking turtles travelling to small, isolated oceanic islands, we show that turtles do not arrive at their targets with pinpoint accuracy," says Graeme Hays of Australia's Deakin University. "While their navigation is not perfect, we showed that turtles can make course corrections in the open ocean when they are heading off-route. These findings support the suggestion, from previous laboratory work, that turtles use a crude true navigation system in the open ocean, possibly using the earth's geomagnetic field."

Despite much study of sea turtle navigation, many details were lacking.
Hays' team realized that was in part because most sea turtles return to spots along the mainland coast, which are also the easiest places to find.

For the new study, his team had attached satellite tags to nesting green turtles (Chelonia mydas) out of an interest in learning about the extent of the turtles' movements and to identify key areas for conservation.
In the process, they realized that, by serendipity, many of the tracked turtles travelled to foraging sites on isolated islands or submerged banks.
It allowed them to explore in more detail how turtles make their way to such small and harder-to-find islands. 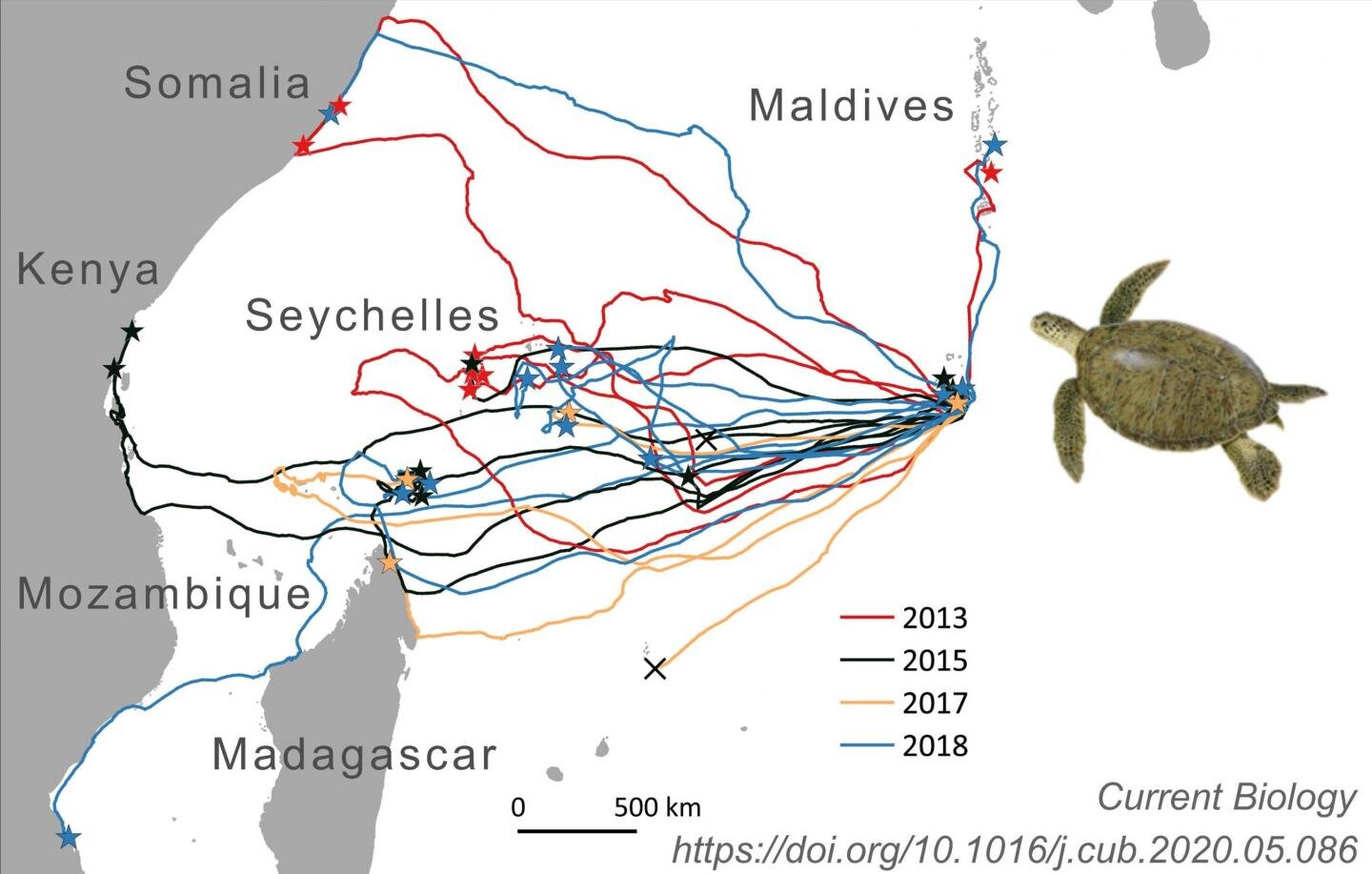 The routes of 35 adult female green turtles travelling to their foraging grounds in the Western Indian Ocean after the end of the nesting season on Diego Garcia, Chagos Archipelago.
Credit: Hays et al./Current Biology

In total, the researchers recorded the tracks of 33 green sea turtles migrating across the open ocean from their nesting beaches on the island of Diego Garcia (Indian Ocean) to their foraging grounds across the western Indian Ocean, many of which were isolated island targets.
Using individual-based models that incorporated ocean currents, they then compared actual migration tracks against candidate navigational models to show that 28 of the 33 turtles didn't re-orient themselves daily or at fine-scales.

As a result, the turtles sometimes travelled well out of their way—several hundred kilometers off the direct routes to their goal—before correcting their direction, often in the open ocean.
Frequently, they report, turtles did not reach their small island destinations with pinpoint accuracy. Instead, they often overshot and or spent time searching for the target in the final stages of migration.

"We were surprised that turtles had such difficulties in finding their way to small targets," Hays says. "Often they swam well off course and sometimes they spent many weeks searching for isolated islands.
"We were also surprised at the distance that some turtles migrated.
Six tracked turtles travelled more than 4,000 kilometers to the east African coast, from Mozambique in the south, to as far north as Somalia.
So, these turtles complete round-trip migrations of more than 8,000 kilometers to and from their nesting beaches in the Chagos Archipelago."

The findings lend support to the notion that migrating sea turtles use a true navigation system in the open ocean.
They also provide some of the best evidence to date that migrating sea turtles have an ability to re-orient themselves in deep waters in the open ocean, the researchers say.
This implies that they have and rely on a map sense.
But the results also show that their map lacks fine details, allowing them to operate only at a crude level.

As a result of this imperfect navigation system, the turtles reach their destination only imperfectly.
In the process, the turtles spend extra energy and time searching for small islands.

The findings also have implications for the turtles' conservation, Hays says.
Turtles travel broadly across the open ocean once nesting season has finished.
As a result, he says, "conservation measures need to apply across these spatial scales and across many countries."

The researchers say that they hope the next generation of tag technology will allow them to directly measure the compass heading of migrating turtles as well as their location.
"Then we can directly assess how ocean currents carry turtles off-course and gain further insight into the mechanisms that allow turtles to complete such prodigious feats of navigation," Hays says.