B.C. Canadian completes 266-day Solo Sail Around the World by chart and sextant

The Line The Equator at dawn. And with daybreak, the last of the milestones turned. By my reckoning 0 00 154 59W. We ghosted across in less than 5 knots of breeze doing just over 3. It has been that way all night. Even under cumulus showers the wind would not waver. Something less than a freight train, but we were on rails. Stomping grounds and familiar stars. Polaris at night and the sun, although still North and heading further still, back where I know it best. And it is summer. Just like that in fact: One moment winter, the next summer although here there is little to choose between the two. Now it feels like the home stretch. Now it feels as if it's possible despite the odds. Now the obstacles seem molehills instead of mountains. Now is the Northern Hemispheree. #equator #homestretch #instantsummer #svseaburban #aroundalone #sextant #penandpaper #circumnavigation #sailor #sailing #nonstop #5capes #onehandfortheship #occadventuresailing #sailinglovers #adventureisoutthere #occchallengegrant #instasailing #sailboatsofinstagram #captainbert #onemanshow #brave #sailinglife #sea #ocean #sailboats #zhik #sailingaroundtheworld #predictwind Follow my tracks in real-time: https://bit.ly/svseaburban
A post shared by SV Seaburban (@svseaburban) on Jun 10, 2020 at 8:03pm PDT

A sailor recently made landfall after 266 days, alone at sea — having circled the globe via the five capes using only traditional forms of navigation.
Check out his story via Instagram or on his website!
Call it the ultimate act of social distancing.

A B.C. man made landfall in Victoria on Saturday after 266 days, alone at sea — having circled the globe via the five capes using only traditional forms of navigation 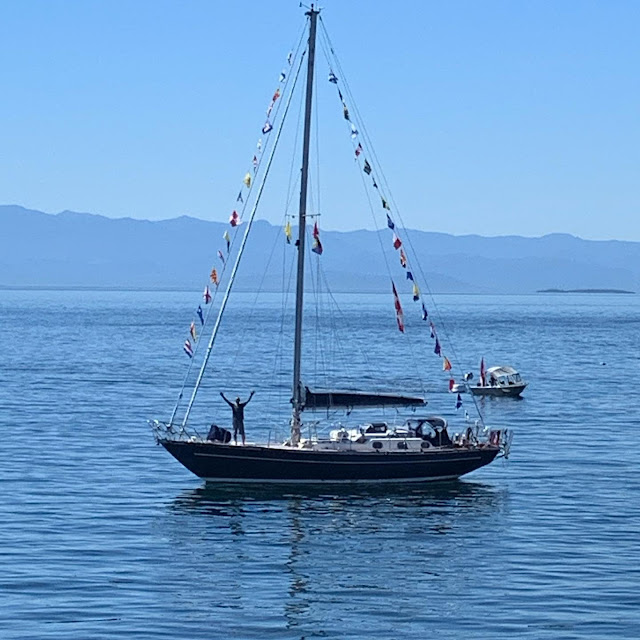 Bert Terhart of Gabriola Island left Victoria in November, making just one brief landfall in San Francisco before it was just him, a 46-foot sailboat packed with food, and the ocean.

Only about 300 people have successfully sailed solo around the world.
Just six people — with terHart being the only North American — have done it navigating by pen, paper, charts and a sextant. A crowd of well-wishers — including family, friends from college and even a Grade 3 classmate — was there to greet him.
“I expected no one to be here, so to be back in the city I love with these people here … It’s mind-numbing,” he told Global News.
“There just aren’t words for it, and (knowing) everybody in the whole world was cheering you on, pushing you to succeed, it’s powerful.”

There was no COVID-19 when terHart set sail, and he said being isolated as the pandemic broke was surreal.

“It was really hard because there’s nothing you can do,” he said.
“You’re not at risk in any way, of course — I’m at risk of the elements and the weather, but I’m prepared for all that … you’re literally a thousand miles away from anyone, even if I wanted to help, it would take a month to get there.”

Terhart, who described himself as already a “square peg in a round hole” in the pre-COVID world, said he was still very anxious about making landfall in a world that had completely changed.
Terhart’s brother Jan was among the well-wishers and said his brother was alone, but never lonely at sea — thanks to radio and email. "I plan to be the first North American to circumnavigate single-handed, non-stop East-about via the 5 great capes using only traditional navigation tools.
NO electronic navigational aids: Just a sextant, an almanac, tables, and pen and paper."

“The one advantage he’s had over people who have tried to do this in the past is that despite ancient navigation techniques, he had modern communication techniques, so he was always in touch with people onshore,” he said.

“He kept pretty much to himself when things were getting terrible because he didn’t want us to worry. But I know that he was facing, for weeks on end, gale force winds (of) 30-40 knots … 30-foot waves, he was just a small speck in a very big ocean, really at the mercy of the elements.”

Terhart, who grew up in Estevan, Sask., packed scientific instruments on his trip to collect data, and said inspiring citizen scientists, young and old, was among his motivations for the epic voyage.

In fact, about 2,000 children from Kenya to New Zealand to New York were following along with him from their classrooms.
“I wanted to engage kids in something that really would stretch their imagination,” he said.
“They would get my post, the teacher would go over it, they would pin my little location on the map, they’d ask questions about how big is the ocean, how deep is it. They’d email me questions — I still have kids writing me letters.”

Along the way, Terhart says it was that kind of support that kept him going in rough seas and tough mental days.
“In my lowest, weakest moments I’m human, so I was afraid, I was uncertain, I was doubtful,” he said.
“In those moments, the people that are cheering for you are actually making a massive difference in your ability to succeed.”

You can check out terHart’s Instagram here and read his blog here.