The abandoned 'Ghost Ship' MV ALTA washed up on the Irish coast during Storm Dennis.
Alta was abandoned in October 2018 after a US Coast Guard relief operation to rescue the crew about 2,200 km (1,400 miles) south-east of Bermuda, stranded after the ship was rendered irreparably disabled on a voyage from Greece to Haiti.
The ghost ship was then sighted by HMS Protector en route to the Bahamas.
In February 2020 the ghost ship Alta ran aground on the coast near Ballycotton, County Cork amid Storm Dennis.
This footage was filmed on Tuesday 18th February 2020. Video by Youghalonline

From Wired by Matt Burgess

The MV Alta drifted in the Atlantic ocean for 18 months, before crashing into the coast of Ireland.
Tracking and current data gives us intriguing clues about its final, fateful voyage

Storm Dennis swept in from the Atlantic, its high winds and heavy rains driven by a powerful jet stream.
The extreme weather, which battered the UK and Ireland in February, flooded of thousands of homes and caused widespread travel disruption and several deaths.

In Ireland, it created a mystery.
At some point in the early hours of February 16, a ship washed up on the rocks off the village of Ballycotton in County Cork.
First spotted by a jogger out for their Sunday lunchtime run, the ship was soon making global headlines.

In its final resting place, the MV Alta was perched sideways on top of a series of jagged rocks, its starboard side facing inland.
The ship looks like it could fall at any moment.
The Alta, which was built in 1976, bares all the marks of years of hard work at sea.
But as it made land, the ship was empty.

The Alta, it turned out, was a ghost ship.
It had been floating around the mid-Atlantic without a soul onboard since the Autumn of 2018.
Ghost ships are not unheard of but they are rare.
The Alta is even more unusual for how long it drifted – almost 18 months in total – during which time it was battered by huge storms and shifted by strong currents.
And, during that whole time, it was only spotted once.
By chance it managed to avoid major shipping routes and other obstacles, leaving its small cargo of oil barrels intact. 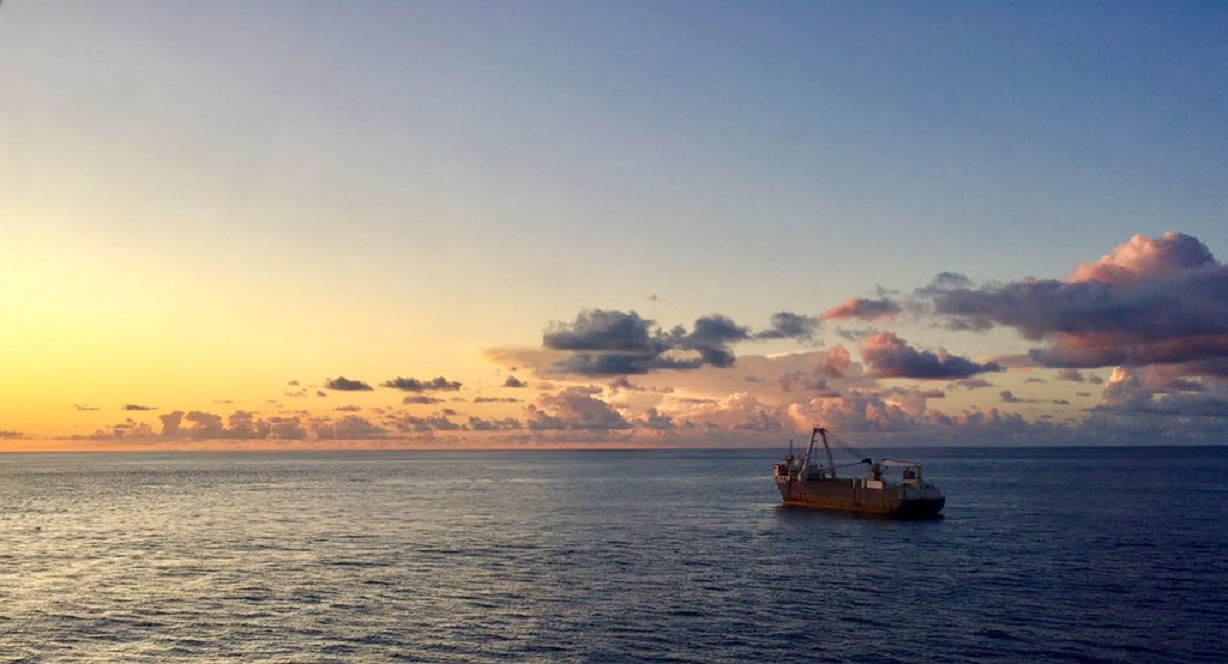 The ship's true owners remain unknown, although it was last sailing under the flag of Tanzania, and the vessel has changed its name four times during the last half decade.
Now ocean current analysis and analysis of data sent out by the ship's onboard Automatic Identification System (AIS) transponders – a technology underpinned by GPS – have shed some light on its most likely path to Ireland.

The last recorded journey of the Alta is a long one.
Transmissions from its AIS data show the vessel was in Piraeus, a port city in Greece, in October 2017.
From here it sailed around Greece's Peloponnese peninsula before docking at the city of Kalamata in November.
The next ten months saw the Alta visiting three other Greek ports – in Piraeus, Paloukia and Salamina – around a dozen times.

Then something strange happened.
In September 2018 the vessel's AIS data showed it at the port of Ceuta, a small Spanish enclave on the north coast of Africa, more than 2,000 kilometres from the Greek ports it was last recorded at.
“It's truly a mystery ship,” says Georgios Hatzimanolis, an analyst at ship tracking website MarineTraffic, one of several firms to have looked at AIS data of the vessel.

“Since August 2015 it has been switching [AIS] on and off sporadically while making some really strange trips,” Hatzimanolis says.
“One from Genoa to Athens and then it switched it off again for a year and a half, then switched it back.” Hatzimanolis says this is “not normal behaviour” – nor is it normal for a ship to change its name and flag so regularly, he adds.

These strange patterns repeated until the Alta reached Ceuta.
It was at this point that the ship headed for open waters on its fateful final, manned, journey.
It was destined for Haiti.
It ended up in Ireland.

The animation above, produced by analysts at Spire Maritime, shows what happened to the Alta.
It left the Strait of Gibraltar in September 2018, before moving into the Atlantic.
“They have the speed going through the Atlantic,” says Max Abouchar, an engineer at Spire.
When the red line of travel turns white, this is the moment the ship slowed down.

“Somewhere, almost mid-Atlantic they suddenly just stop,” Abouchar says.
The period shown in the animation covers September to October 2018.
When the ship slowed down it is predicted to have been travelling at speeds of around 0.1 or 0.2 knots, which equates to around 0.2 to 0.3 kilometres per hour.
Put bluntly: it was barely moving at all.
“They drifted around a bit, probably just by the currents.
Then they move a little bit quicker, especially East, towards in the direction of Africa.” Abouchar, who uses Spire's data gathered by satellites to monitor currents, says these looped movements are unlikely to just be the sea moving the ship around.

Instead, he speculates, the vessel was either trying to move under its own power or that it was being towed by another vessel.
“Whatever was towing it or driving it gave up after a while,” Abouchar says.

It was around this time that US authorities became involved with the Alta.
In October 2018, the USCGC Confidence, a coastguard ship, is reported to have rescued ten crew from the vessel.
At the time GCaptain reported that the seafarers were stranded on the boat that was around 1,300 miles southeast of Bermuda.
They had been stuck on the ship for 20 days and had received a food supply, dropped by a coast guard plane, on October 2.

“We were conducting a law enforcement patrol near Puerto Rico when we were assigned to assist the crew of the motor vessel Alta,” Confidence commander Travis Emge told GCaptain.
“We traveled over 1,300 nautical miles to get to the disabled ship.” The coast guard said the crew were being taken to Puerto Rico and the ship's owners were being contacted so Alta could be towed back to shore.
But this never happened.

“Maritime is a really low margin commercial endeavour,” says Dana Goward, president of the Resilient Navigation and Timing Foundation, a non-profit which campaigns for better GPS security.
“Except for the cruise line industry, there's not a lot of extra money floating around.
“Actually getting a hold of a real person by the collar and saying, 'come and get your ship' can be a challenge.”

No available data has been able to track the Alta's exact route through the Atlantic to Ireland.
Once the its AIS stopped transmitting – most likely due to it being abandoned – it became far harder to monitor the ship's movements.

While the Alta looks huge when it's nestled against the coast of Ballycotton, in the middle of thousands of miles of Atlantic it's a tiny dot.
Tracking ships that aren't transmitting AIS data is virtually impossible.
“There's certainly nothing off the shelf that I can think of that could provide that kind of long term tracking and warning of other vessels,” Goward says.
“You could hook up an AIS unit with a battery and put it there.
But that would only last a couple of weeks.”

Vessels that disable AIS on purpose are almost always operating illegally.
At the start of 2018, the European Commission opened an investigation into two vessels believe to be turning off their AIS transponders to fish illegally.
On the high seas, so-called dark ships are a big problem.

The US Navy is looking for a way to fix this.
It has issued a tenderfor technology companies to produce a system that can help it “more clearly mark objects in water”.
But that's come too late to help people trace how the Alta reached Ireland.

Previous reports speculate that the Alta may have drifted up the coast of Africa towards the UK and its final resting place.
Abouchar doesn't believe this to be the case.
“It would be against all currents and they would have met quite a bit of traffic,” he explains.
Where the Alta stopped transmitting AIS data is roughly near the centre of where currents in the Atlantic circulate.

During all its months at the mercy of the Atlantic the ghost ship was only spotted once – by the British Royal Navy.
On September 2, 2019, almost a year after its crew were rescued, staff aboard the HMS Protector tweeted they had discovered the Alta in a “strange event”.
The crew put the call out asking if it required any help, but no response was received.

The HMS Protector didn't state its location but analysts looking at its movements say a day after the social media post it was in Bermuda – around 1,300 miles from the last known location of the Alta.
In the grand scale of the ocean, this isn't that far from Canada and Newfoundland.

Ocean current data collected from Spire's satellites and modelling – shown above – gives a clue of how the Alta ended up in Europe.
The animation above shows how currents were moving in the months before the vessel was grounded.
Each arrow shows the direction currents were flowing, with the red overlays demonstrating faster moving streams.
All arrows point to Ireland.

“If you started up North, near Canada and Newfoundland, you would catch a major current stream heading from there and that would have definitely washed you up at Ireland,” Abouchar says.
“It would take quite a while to move the distance it did, until it reached that stream up by Newfoundland.
That's going at one or two knots.”

Despite the slow speed, there was plenty of time between the Alta being seeing by the Royal Navy to the final crossing of the Atlantic.
“With the oceans behaving as they do, if the ship didn't have anyone on it, it would have followed the ocean path and eventually ended up somewhere around the UK or British Isles area,” Abouchar adds. 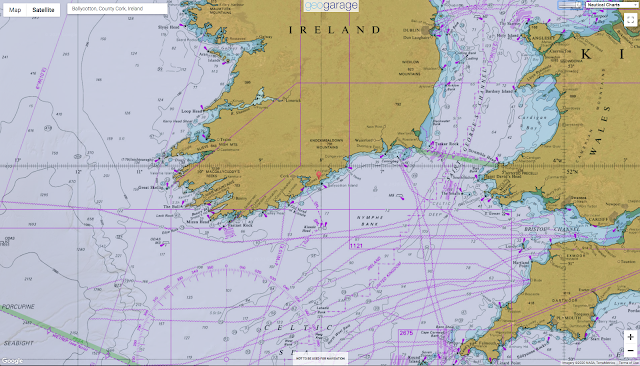 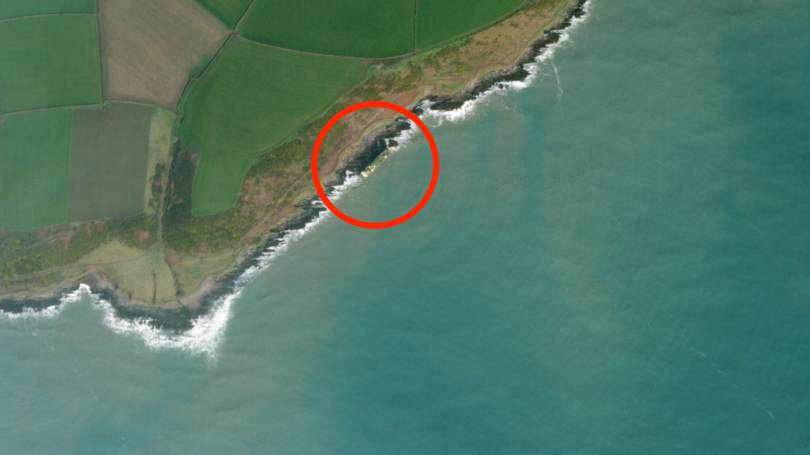 The MV Alta on the coast of Ireland on March 15, as seen by satellite
Planet Labs Inc

When it finally ran aground in Ireland one member of the local coastguard said it was a “one in a million” chance.
More than a month after it marooned, the Alta remains in the same position.
Ireland's revenue commissioners have become the “receiver of wreck” as a result of it running aground on Irish land.
A person who is believed to be connected to the ship's owner made contact with authorities, but no action has been taken.
"The council continues to liaise with Revenue regarding ownership of the vessel," a spokesperson for Cork County Council says.

The local authorities have scrambling to make the wreckage safe.
A group of teenagers boarded the ship one night.
They recorded a haunting video from inside the vessel, where debris has been thrown around by the power of the ocean.

Officials have airlifted 95 oil barrels from the boat – 62 of these were full.
"The council is engaged with relevant experts to assess whether there are any residual environmental or ecological risks posed by the vessel," a spokesperson for the council says.
Absorbent pads have also been placed around pipes on the vessel that may contain oil.
To stop anyone else boarding the Alta engineers have removed the ship's ladders and closed off all access points.

“It's bad that the Alta came ashore on the Irish coast,” Goward says.
“But it could have been a lot worse: it could have strayed into a traffic lane or the English Channel and someone could have rammed right into it, sunk, and could have had a major loss in life or more of a significant pollution incident.
At least in this instance it was controllable.”