From the WSJ By Walter R. Borneman

A sweeping history of naval warfare told through the evidence of sunken ships scattered around the globe.

There is something warmly nostalgic yet also chilling about shipwrecks.
Proud vessels that sailed the seas lie hidden beneath the waves.
Some wrecks squat in muddy waters a few meters deep; other are entombed in icy depths miles beneath the surface.
The ruins of warships hold a special fascination: Their underwater resting places can amount to a map of what occurred during battle, sometimes unread for centuries.

In “War at Sea,” James P. Delgado delivers a sweeping history of naval warfare told through the evidence of sunken ships scattered around the globe.
Mr.vDelgado has spent a career researching shipwrecks and diving down to them.
In 2001, he produced “Lost Warships, An Archaeological Tour of War at Sea,” a large-format survey of the subject.
At least half of the material in that book reappears in “War at Sea”—some of it verbatim—but there is also a good bit of new material drawn from what Mr.
Delgado terms the “exponential growth” in warship discoveries over the past 20 years. 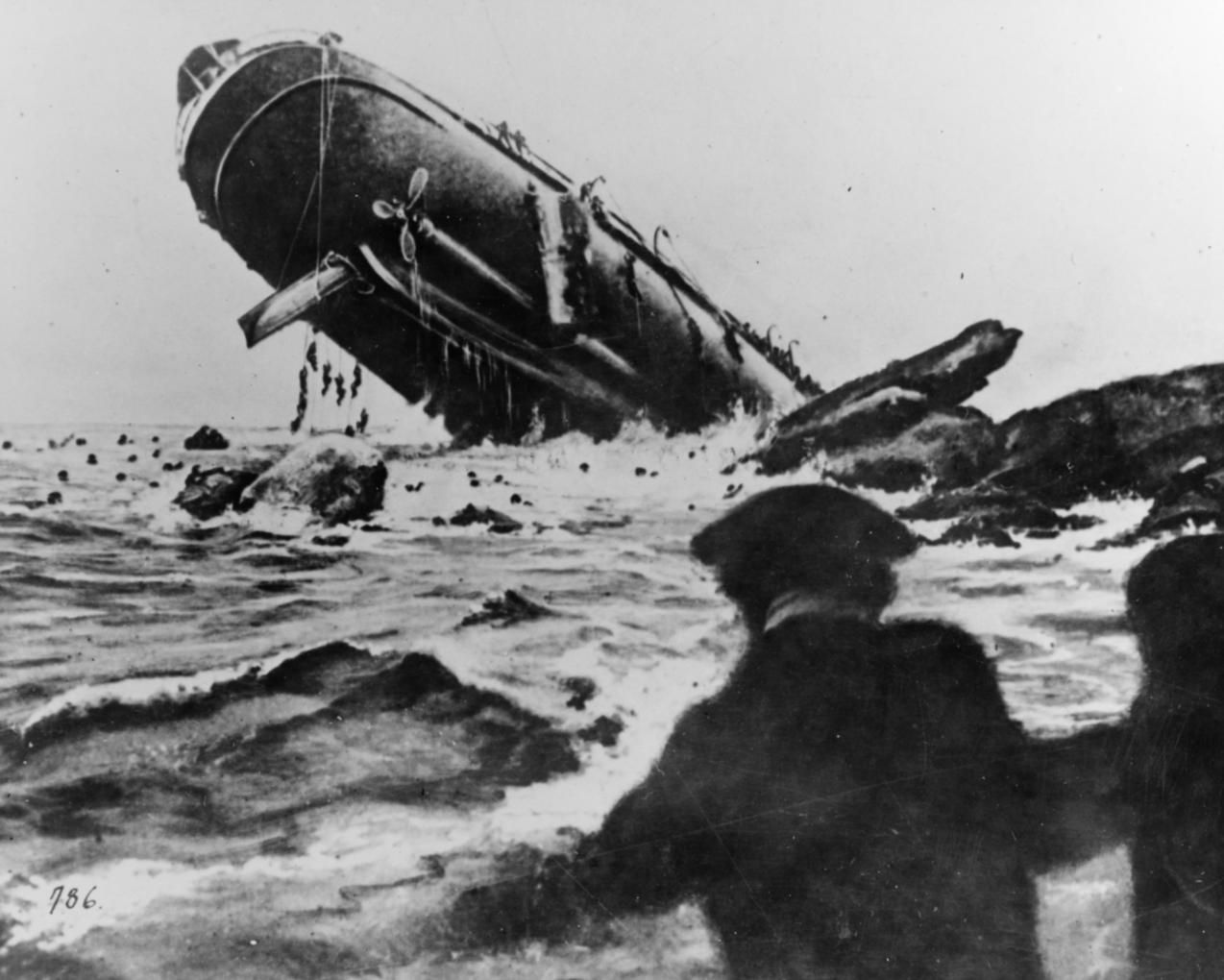 A British transport sinking at an unknown location after being torpedoed by a German submarine. Photo : Naval history and heritage command

One purpose of Mr. Delgado’s narrative is to trace the development of seaborne technologies and the changes they brought about in naval warfare, even ahead of shipwreck evidence.
He describes, for instance, the innovation of the ram at the bow of Greek galleys around 850 B.C.
as “the ancient equivalent of introducing gunpowder.”
There are observations on tactics as well, such as the maneuverability of Octavian’s smaller ships as they won victory darting about and ramming the larger vessels of Antony and Cleopatra at Actium in 31 B.C.

No wrecks from that battle have been found, but there are numerous sites in northern Europe dating from around A.D. 1000 that provide what Mr. Delgado terms “a detailed sense of ‘Viking’ shipbuilding and warships”—vessels that included the gracefully curved hulls and tall bows of the type “used by the Danes and the Normans to conquer England.”
About the same time, Byzantine warships were operating in the Mediterranean: Some of them, retrieved by marine archaeologists, are preserved so well that one can see the benches where the rowers sat side by side, their oars passing through “leather sleeves that served as watertight gaskets.”

Across the globe, Chinese naval might ruled Asian waters in the 1400s and protected trade as far west as the Ottoman Empire.
An archaeological prize long sought but not yet discovered, Mr. Delgado says, is one of Adm. Zheng Ho’s massive treasure ships from this period—they likely “out-weighed, out-gunned, and out-classed anything afloat in a European navy.”
European powers were only beginning to build larger warships, and they “never came into contact with the full flower of Chinese naval might.”

Two of the most famous European shipwrecks from the era of sail are the well-preserved Mary Rose, sunk off Portsmouth, England, in 1545 en route to dueling a French fleet, and the Vasa, King Gustaf II Adolf’s prized galleon meant to rule the Baltic, sunk in Stockholm harbor in 1628 on its maiden voyage.
Both ships met their demise not from enemy guns but from top-heavy designs compounded by inept seamanship.
Mr. Delgado calls the Mary Rose a “Tudor naval time capsule,” yielding thousands of artifacts, including an array of longbows.

North America holds a treasure trove of wrecks, from the 16-gun British sloop Boscawen, lost on Lake Champlain during the French and Indian War, to flat-bottomed bateaux sunk by the British in the cold lake waters.
Preserving boats by gently sinking them meant they wouldn’t come to destruction from the winter ice or be captured by the enemy—and could be lifted up and made seaworthy again.

Search technology, Mr. Delgado notes, has improved in recent years and led to many discoveries.
Multibeam sonar and ROVs (remotely operated vehicles) have permitted archaeologists to map not only individual wrecks from the 1915 Battle of Jutland in the North Sea but also the entire Jutland battlefield of some 3,000 square nautical miles.
In some cases, we now know whether ships were advancing or retiring during the battle.

The scale of World War II maritime archaeology staggers the imagination.
A total of 1,454 warships of all countries—and many thousands more merchant ships—were lost during the conflict.
The Battle of the Atlantic project, conducted in 2008-14, documented the losses of Allied warships and merchant ships and their predator U-boats at locations such as “Torpedo Junction” off Cape Hatteras, N.C., where U-boats made hundreds of kills within sight of the American coast.

There have also been hunts for the legendary ships from the conflict: the German battleship Bismarck (found in 1989), the British battleship Hood (2001) and the American aircraft carrier Yorktown off Midway (1998): all were sunk in battle.
Robert D. Ballard, the man who discovered the wreck of the Titanic in the 1980s, led the efforts to locate the Bismarck and Yorktown.

Mr. Delgado has been involved with not only research on the USS Arizona at Pearl Harbor but also the initial search for a Japanese midget submarine reportedly fired upon in the outer harbor that Sunday morning.
In 2002, the sub was located with a hole in its conning tower, validating the report of the captain of the destroyer Ward.
As for the Ward itself, it eventually participated in the Battle of Leyte in the Philippines, where it was sunk in December 1944.
The wreck was found in 2017, one of the discoveries made by a team of marine archaeologists financed by the Microsoft billionaire Paul Allen.

In the past two years expeditions have located the cruiser Juneau off Guadalcanal, the final resting place of the five Sullivan brothers who insisted on serving together; the cruiser Indianapolis, sailing alone after delivering components of the first atomic bomb; and the carrier Lexington, sunk by the U.S.
Navy in May 1942 to keep it from falling into Japanese hands after sustaining bomb damage in the Battle of the Coral Sea.

And discoveries continue.
Last month, the wreck of the USS Eagle 56, one of 60 identical ships of the Eagle class of patrol boats, was found off the coast of Maine.
Evidence from the site suggests that the Eagle 56 was sunk not by a boiler explosion, as long thought, but by a torpedo—making it the last U.S. warship sunk by a German submarine.

Readers of “War at Sea” may find themselves wishing for even more about the World War II wrecks, given how many have been found and how dramatic their battle histories are.
And readers may wish to know more of Mr. Delgado’s personal experience, given the hints he offers of his own shipwreck searches.
Having written a highly readable survey of naval warfare and technology, he clearly has more stories to tell.