‘The Raft’ Review: A crew of 10 set adrift with a moody svengali

In 1973, five men, six women and a 16mm camera drifted across the Atlantic on a raft as part of anthropologist Santiago Genovés’ unique ‘Acali Experiment’; a sociological study of human aggression and sexuality.
Genovés appointed only women to the positions of power on the craft, believing that the group would soon descend into violent power struggles.
Nobody, including (the questionably sexist) Genovés, expected the events that transpired over the three-month journey.
Archive material, a reunion of surviving expedition members and dramatic recreations on a custom-built replica of the raft allow Lindeen to create a compelling portrait of an idea and era.
His questioning documentary probes the tensions between dogma, experience, memory and emotions, and goes some way to restoring dignity to the ‘survivors’.
trailer on Vimeo


From NYTimes by A.O. Scott

A fascinating documentary re-examines a notorious anthropological experiment from the 1970s. 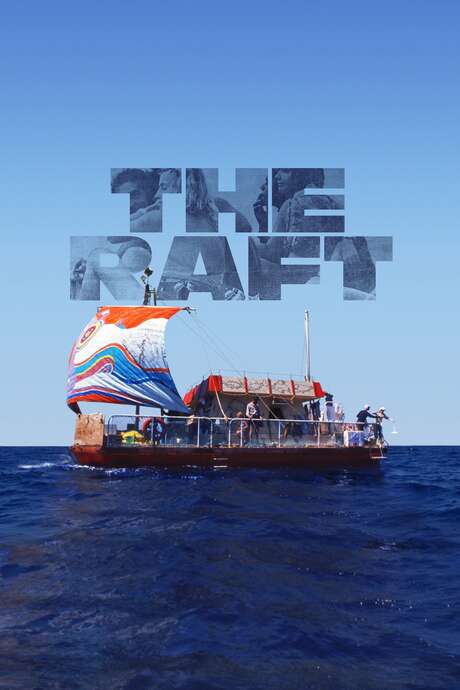 There is no collection of human beings too small for conflict, as anyone who has had roommates or endured a family car trip surely knows.

But social science exists to test — and sometimes to affirm — our self-knowledge as a species, which is why 11 people spent the summer of 1973 crossing the Atlantic on a small raft powered only by wind, ocean currents and the ambition of a Mexican anthropologist named Santiago Genovés.

This journey, the subject of a fascinating new documentary called “The Raft,” was not an early exercise in “Real World”-style television, though a film camera was present on board the vessel, silently recording the interactions of the young, international, scantily dressed crew.
Genovés, who designed the Acali (as it was called) and made the crossing with his subjects, was motivated by idealism and curiosity rather than — or perhaps in addition to — prurience. 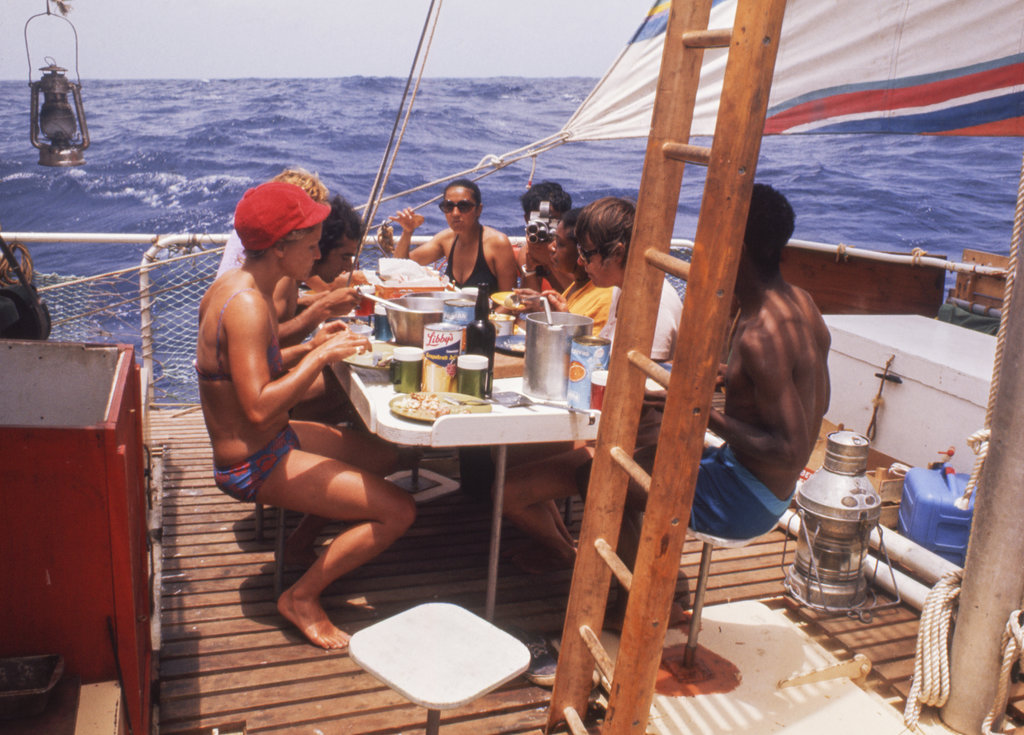 Crew members aboard the Acali for an experimental trip across the Atlantic in 1973.
In the documentary “The Raft,” participants recount their experience decades later.
Three months without privacy on a raft.

Labelled ‘The Sex Raft’ by tabloids and frowned upon by leading academics and scientists, the experiment led by anthropologist Santiago Genoves in 1973 is an incredible story.
The story of the strangest social experiment of all times - told by those who took part in it. In 1973, five men and six women sailed across the Atlantic on a raft.
A social experiment and a scientific study of violence, aggression, sex and group behaviour, conducted by a radical Mexican anthropologist.
Everything was filmed and documented in a diary.
But theory is one thing, practice is another.
And without wanting to reveal too much, the experiment didn't exactly work out as planned.
Over 40 years later, Swedish artist and filmmaker Marcus Lindeen brings the crew together again for the first time since the experiment, on a faithful copy of the raft in a film studio, to look back at the three intense months they spent together, isolated and without privacy.
An experiment that in many ways encapsulates the excessive 1970s, and which produced a strange wealth of analogue 'big data' about human relations in the shape of Super 8 footage, statistics and diaries from the journey.
Credit : Fasad/Metrograph Pictures

After surviving an airplane hijacking, he conceived of an experiment that he hoped would reveal whether violence was wired into the human genetic code or whether it arose through social conditions.
In its mixture of high-mindedness, arrogance and dystopian potential, the voyage of the Acali recalls other notorious undertakings of its era, notably Philip Zimbardo’s Stanford Prison Experiment. In this case, instead of being confined to cells and divided into opposing groups, the subjects were set adrift for three months and encouraged to be as open and free as possible.

Genovés’s contemporaneous diaries and later reflections — read in voice-over by the actor Daniel Giménez Cacho (“Zama”) — provide one narrative thread in “The Raft.”
If the director, Marcus Lindeen, had followed the usual documentary methods, blending old footage with interviews and maybe a re-enactment or two, he would have accomplished something worthwhile, illuminating a minor chapter in the history of intellectual hubris and casual nudity.
But what he does is something far more interesting.
By setting Genovés’s words in counterpoint with the recollections of seven of the participants who are still alive, he reinterprets the experiment, finding meanings that the scientist missed. (Genovés died in 2013).

More than 40 years after the crossing from the Canary Islands to Mexico, the six women who sailed on the Acali gather aboard a plywood replica built for the film on a soundstage in SwedenTheir reminiscences are thoughtful and emotional — their well-worn faces beautiful, weathered afterimages of the ones we see in the footage from 1973 — and they expose the complicated power dynamics that emerged in the group, as well as an easy camaraderie that challenged Genovés’s hypothesis. 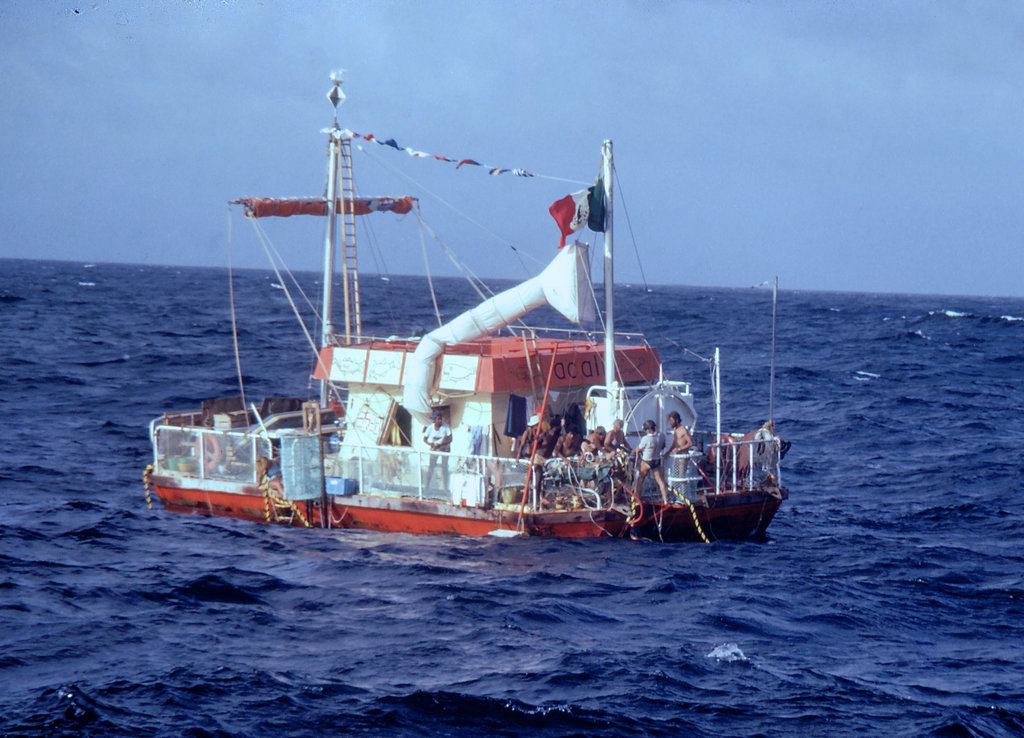 Lindeen's film about the Acali experiment is a both dramatic and psychologically insightful work, which brings a sensational, but almost unknown story into the present age without losing sight of the nuances of the radical adventure.
Genoves wanted to find the solution to violence and bring about world peace; his method was to assemble of crew of men and women from diverse backgrounds and create a microcosm of the world, but with women in more powerful roles – a climate he hoped would be the perfect storm.
Bringing together survivors from the experiment aboard a reconstructed raft built to proportion in present day, The Raft explores their perceptions of the events of 45 years ago.
With an incredible wealth of filmed footage from the raft, and frank conversations between the living participants, uncomfortable truths emerge and the nature of Genoves’ controversial experiment is reconsidered.

When violence failed to erupt — except for one incident, in which the target was an unlucky shark — he tried to instigate it, a blatant violation of basic ethical standards in social science.
Though he comes across in his own writings as witty and self-aware, the picture that emerges decades later is of a moody, manipulative Svengali, blinded by his ego to what was really happening on the raft.

Before setting sail, Genovés had given the most important jobs to women.
Maria Bjornstam, an officer in the Swedish merchant marine, was the captain.
Edna Reves, who had served in the Israeli Army, was the ship’s doctor. Servane Zanotti was the designated diver.
The other men seem to have accepted this arrangement without complaint, but Genovés had a habit of undermining the women’s authority.
For no good reason, he took away Bjornstam’s command, an act of mutiny that, she dryly points out, is generally punishable by death. Another woman, Fé Seymour, one of two black Acali crew members, recalls his casual racism and misogyny, though some of the others disagree.

Their collective testimony amounts to a feminist critique of Genovés’s methods and assumptions. Toward the end, Seymour argues, movingly and persuasively, that the experiment was a success, but not in the way its architect had intended, and not with results he could recognize.
He was so intent on finding violence and dissension that he failed to read the data on solidarity and problem-solving — on the deeply rooted human potential to be decent — that was right in front of his eyes.