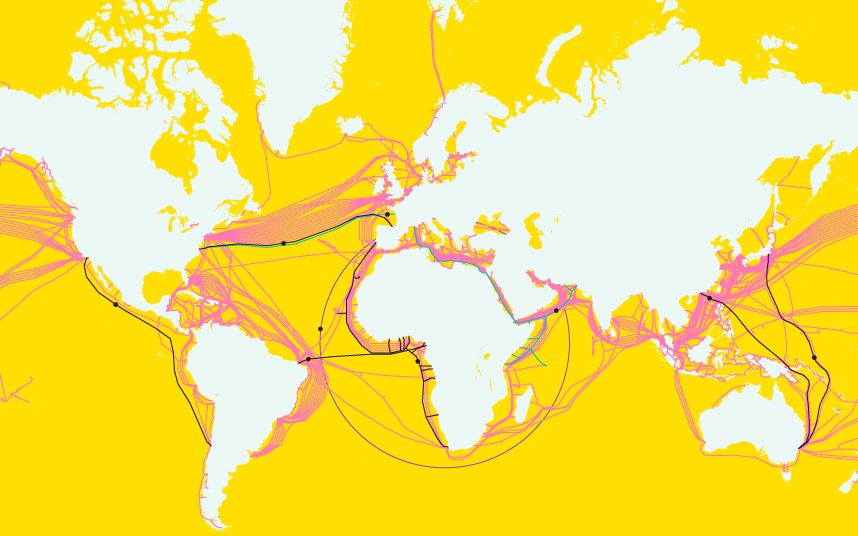 From The Telegraph by Hasan Chowdhury

Tourists to the scenic port city of Valparaiso, on the Pacific coast of Chile, have plenty to admire.
Traditionally, visitors have swarmed across the city’s hillside to look at its vibrantly hued clifftop homes, street murals and sea views that inspired Pablo Neruda, the Nobel laureate.
“If we walk up and down all the stairs of Valparaiso, we’ll have walked all around the world,” the poet once wrote.

More recently, the city has been hosting a new visitor: Google, which is building a connection with the world of an entirely different kind.
Last month, the US technology giant laid the final section of a giant undersea cable, named Curie after the Polish scientist, that stretches 6,500 miles across the Pacific Ocean from Los Angeles.

Undersea cables are the vital unseen plumbing of the internet, carrying near 99pc of the world’s data and web traffic at close to the speed of light across the sea floor.
By being hooked up to them, places such as Valparaiso and cities across Latin America and beyond can enjoy the economic fruits delivered by high-speed broadband connectivity.

The subsea fibre cable which arrives here is not unique.
Around the world – from the remote island of Tonga to the shores of Cameroon – some of America and China’s biggest technology companies, including Facebook, Microsoft and Huawei, are forking out billions of dollars on similar underwater projects in a bid to gain an edge in a battle for control of the physical infrastructure of the internet. 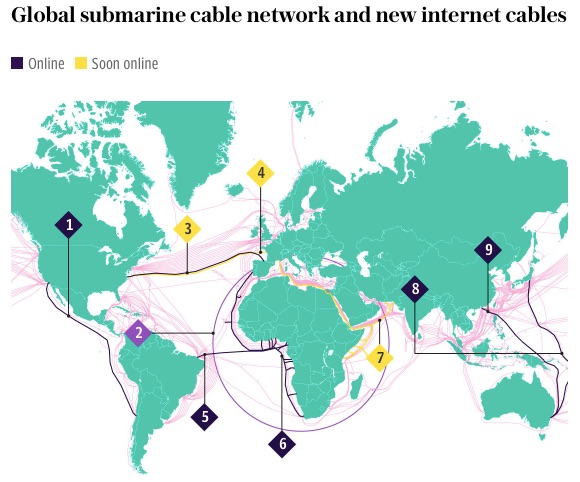 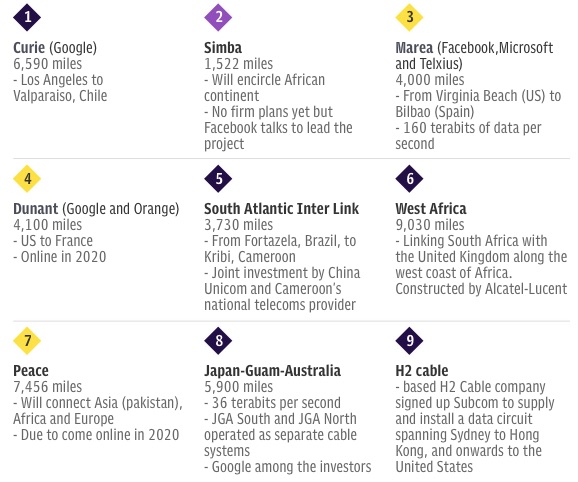 There is a lot at stake.
Mark Sedwill, Britain’s former national security adviser, warned parliament in 2017 that by severing undersea internet cables an attacker could “achieve the same effect as [was] achieved in World War Two by bombing the London docks”.

Much of the debate around who controls access to the data on which our modern lives depend has revolved around the roll-out of 5G telecom networks.
But a similar debate over who owns and controls access to these subsea networks is emerging, amid growing concerns about security and espionage.

“Because we’re so connected by wireless devices, people often think about things being up in the air,” says Jayne Stowell, an infrastructure specialist at Google.
“The reality is [that] bits of information [travel] through fibre optic until the very last mile of delivery.
Intercontinentally, almost all of it goes through the sea.”

Many of the existing subsea links were built at the height of the dotcom boom of the late Nineties, when more than $20bn (£15bn) was spent on the technology.
But the decades-old fibre optic links that were laid by telecoms firms are starting to be replaced by tech giants looking to seize control of cables to provide faster and better links, including to new regions where internet use is booming.

In 2017, Facebook, Microsoft and telecoms firm Telxius teamed up to build a cable running over 4,000 miles from Virginia Beach on the east coast of the US to Bilbao, Spain.
Microsoft claims the cable, called Marea, about the weight of 34 blue whales, can deliver 160 terabytes of data per second – enough, it says, to make it 16m times faster than the average home internet connection.

Google is planning another cable, named Dunant, that will connect the US to France by 2020 along one of the busiest global routes for the internet, taking its tally of investments in subsea cables to 13.
Facebook is planning to develop a cable named Simba to encircle the entire African continent.

US firms aren’t the only players. Huawei, the Chinese telecoms giant that has been at the heart of a debate about the security of 5G infrastructure, is the dominant player from China in the subsea cables market.

A giant, 9,000-mile cable linking South Africa with the UK, built initially by former telecoms firm Alcatel-Lucent, was upgraded by Huawei Marine in 2015.
In total, Huawei is working to build or reconstruct close to 100 subsea cables. 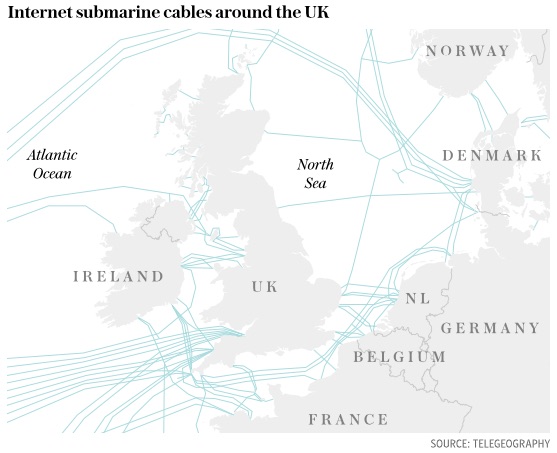 At present, there are around 380 deep sea cables owned by companies that control the internet.
But with just 30pc of the possible routes currently in use, according to market research firm TeleGeography, an image of cables sprawling from one continent to the next starts to emerge.

“You get this amazing pattern that emerges of the physical infrastructure of the internet built on centuries-old trading paths,” says Andrew Blum, author of Tubes, a book on the physical infrastructure of the internet.
“You have networks that connect the same cities that have always been connected by networks: New York and London, Singapore, Hong Kong, Mombasa – classic port cities.”

Deep sea cables are about the size of a garden hose.
A number of fibre optic wires about the thickness of horse’s hair can be packed into a loose tube that is wrapped by a mesh to keep the wires in place.
The more fibre, the faster the internet.

Surrounding that is another layer of copper welded tight and a final layer of plastic to allow electrical signals to zip across the ocean without the fear of seawater ruining the cable.
A specialised boat lowers a digging device into the ocean that ploughs the sea floor and lays the cable.

At regular, 62-mile (100km) intervals, the signals that carry the data of internet users around the world require a boost.
“Because you can’t put power plants under the ocean, you have power equipment on either end to power the cable,” says Stowell.

Traditionally, subsea cables have been the product of a consortium of companies and organisations working together to achieve similar goals.

But the advantage of taking control of one’s own sea cables have become apparent.
Google’s Curie cable is privately owned by the firm, allowing them to build it in “under two years”, Stowell says.
That compares to a normal time frame of four or five years.

Not only that, it gives a company such as Google full autonomy over the exact technology used, the end goal to be served by the cable and the precise configuration of its route.
“You have no public internet but just a very large collection of privately owned networks that connect to each other,” says Blum.
“Who pays who for use of those networks and who pays who to carry their data becomes a really complex issue.” 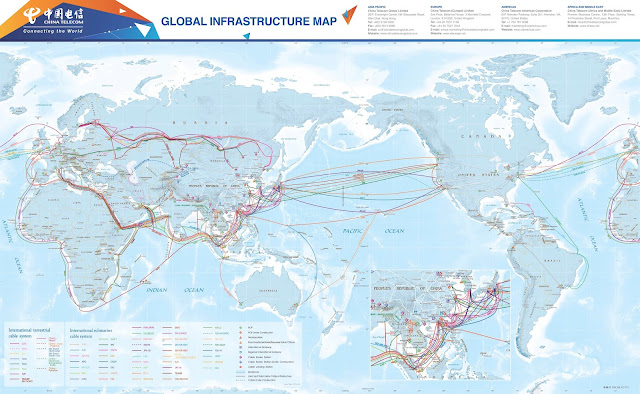 The complexities run deep.
As the US and Chinese firms fight to gain control of cables, the question of who can, and should, control the internet, becomes a muddied one.
“There are moments where internet companies exceed the bounds of state players and I think there are moments where there’s still a state interest in controlling infrastructure.” says Blum.

Deeper still is a question of security.
As undersea cables bounce some of the most sensitive user data back and forth between regions, the tussle to grab hold of cables becomes inherently geopolitical.

Last year, Australia inked a deal to build a cable to the Solomon Islands.
The $78m project was initially due to be managed by Huawei, but the Chinese firm was ultimately left out over security concerns.

The decision is one that is likely to shape a debate for other countries around the most vital components of the internet, and could turn out to be as polarising as the one that has shaped around 5G.

In the more immediate future, the US and China may have a more menial problem facing their subsea cables.
“The areas of vulnerability are usually fishermen and ship anchors,” says Stowell.
“Almost 90pc of outages of cables are caused in shallow waters and are caused by those two sources.”