The drillship Rowan Resolute in the Gulf of Mexico during a flight out of New Orleans in July 2018.
(Bonnie Jo Mount/The Washington Post)

From WP by Darryl Fears

Up to 1,000 gallons of oil per day are being removed from the site of the Taylor Energy spill, says the owner of company that installed a containment system.

The U.S. Coast Guard said Thursday that it is finally containing and collecting oil from a massive 14-year spill in the Gulf of Mexico, the longest offshore disaster in U.S. history.

More than 30,000 gallons of oil have been collected over several weeks since a containment system was installed about 12 miles off the coast of Louisiana, the Coast Guard said.
Capt. Kristi Luttrell, who is overseeing work performed by a contractor, the Couvillion Group, called the containment a major milestone that could significantly reduce the impact of the spill, which will enter its 15th year in September. 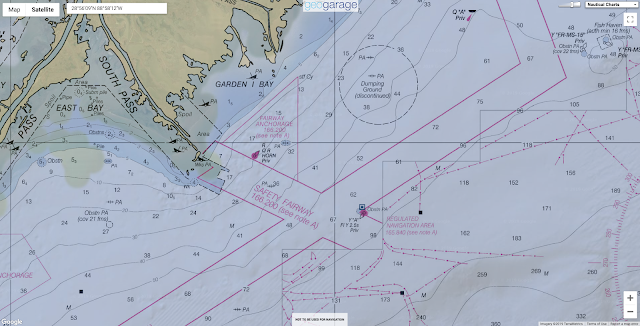 Location of the MC20 Taylor oil spill, off the southeast coast of Louisiana with the GeoGarage platform (NOAA nautical raster chart)

A 32-mile-long oil slick stretches east from the former site of Taylor Energy's Mississippi Canyon 20 A platform (X), which was knocked down and covered by a landslide during Hurricane Ivan in 2004.
(NASA Aqua satellite / Taylor Energy slick terra aqua 06.18.2013)
see WaterMapping video

Luttrell entered into a contract with Couvillion last year after the company responsible for the spill, Taylor Energy, failed to follow her orders to do so on its own.

The system’s success could be a serious setback to Taylor Energy’s efforts to stop the containment effort.
The company filed a federal lawsuit in December, claiming that Couvillion lacked the expertise to install a system to capture oil leaking from its wells.
They broke open when Hurricane Ivan caused the walls of a deep sea canyon to collapse and sink an oil platform.

In a separate lawsuit, the company also claimed that Luttrell’s order to mount a more aggressive response to the spill was rash.
It came a day after The Washington Post revealed an expert analysis that contradicted Taylor Energy’s claims that almost no oil was present at the site. 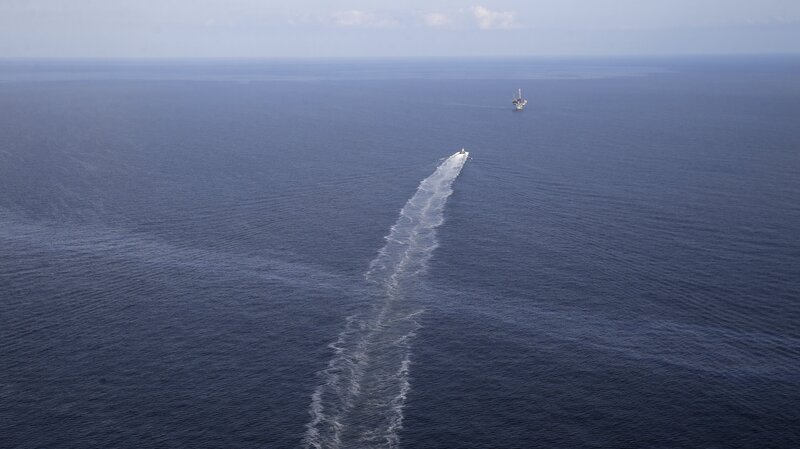 The wake of a supply vessel heading toward a working platform crosses over an oil sheen drifting from the site of the former Taylor Energy oil rig in the Gulf of Mexico in 2015.
The Coast Guard says it has contained the oil spill.
Gerald Herbert/AP

The analysis by Oscar Garcia-Pineda, a geoscience consultant who specializes in impacts from oil spills, estimated that 1.5 million to 3.5 million barrels spilled into the gulf from the Taylor Energy site over more than 14 years.
Acting on that finding, as well as other scientific reports, the Coast Guard issued Taylor Energy an ultimatum to hire a company to build a device to contain the oil or face a fine of up to $40,000 per day. 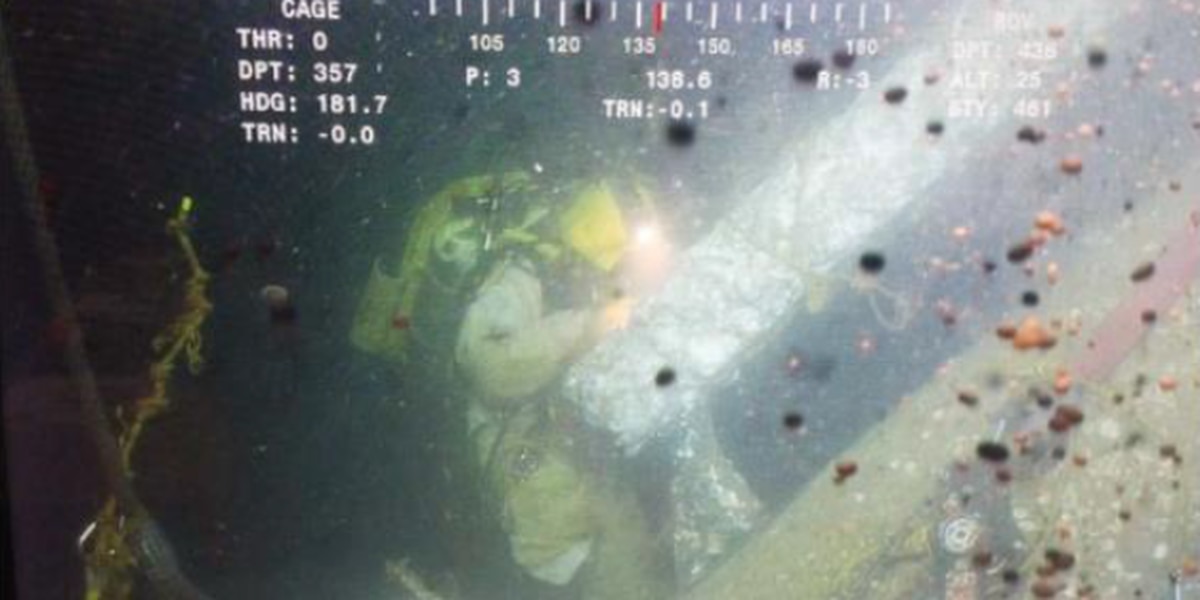 Weeks of monitoring by the Coast Guard shows that Couvillion’s containment system is working, Luttrell said Thursday.
The system was completed and fully operational April 29, but Couvillion started collecting oil 12 days before that.

The oil is pumped from deep-water storage tanks to a ship that brings it to shore to separate it from water.
Oil that can be salvaged is sent to a licensed receiving facility, and the rest is recycled or disposed. 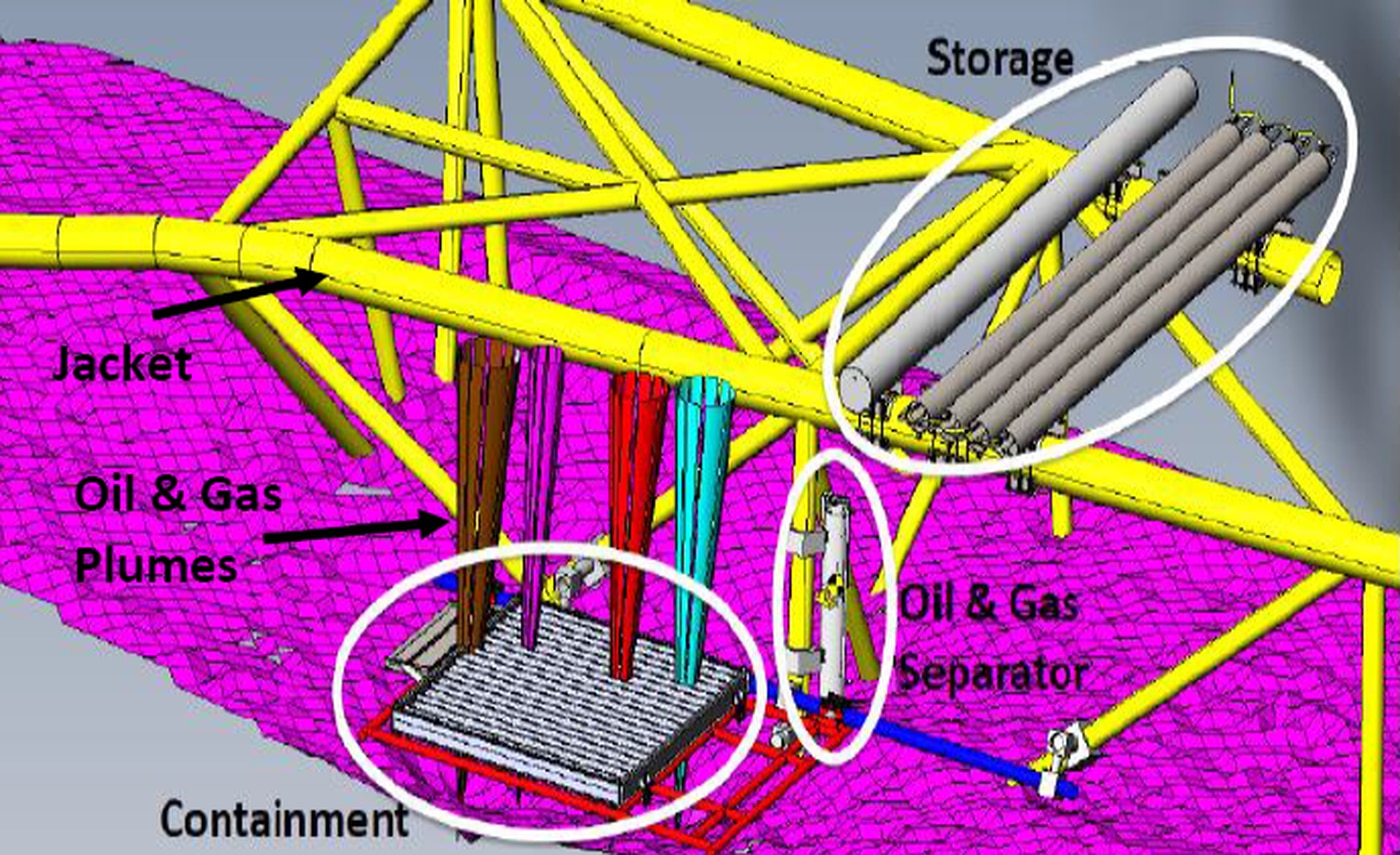 Recovered oil is U.S. property, Luttrell said, and proceeds from its sale are credited against Couvillion’s bill.

Timmy Couvillion, owner and chief executive of the company, said it is collecting up to 1,000 gallons of oil each day.
“We’re absolutely proud of what we’ve accomplished,” Couvillion said.
Workers, as many as 100 at times, battled inclement weather and rough waters as they installed the system.
They were sometimes caked in oil and had to guard against it entering their working quarters.
The large amount of oil “was no surprise at all,” Couvillion said, considering the length of the sheen on the gulf’s surface at the site and an acute smell.

As a result of the work, the oil sheen is nearly gone, but the oil is not, he said.
“It is a reminder that these wells need to be plugged . . .
per the federal government’s standard,” Couvillion said.
He called the containment “a temporary solution to an evolving problem.
We’ve contained the oil but it’s still being released into the environment.” 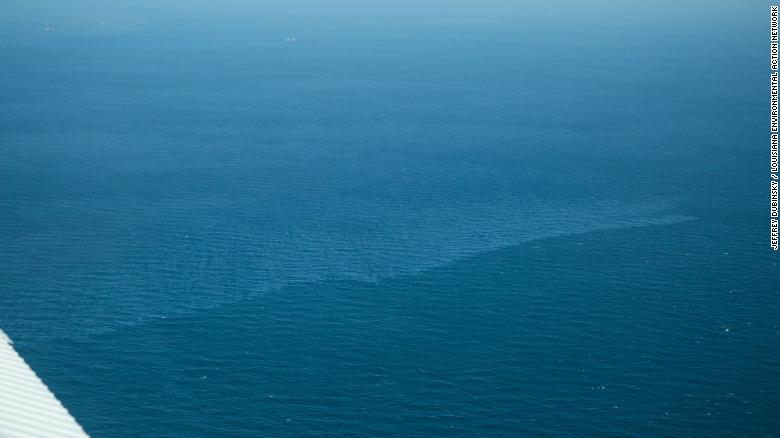 The Taylor spill as seen from a 2015 Louisiana Environmental Action Network aerial patrol.

Todd Ragusa, a Taylor Energy spokesman, provided a company statement that said it “looks forward to receiving the information needed to confirm the Coast Guard’s statement, which, if accurate, is encouraging.”

During proceedings at the federal court in New Orleans where Taylor Energy’s case is being heard, U.S.
District Judge Ivan Lemelle asked pointed questions to both the Coast Guard and Taylor Energy about why the cleanup is taking so long.
Lemelle asked the Coast Guard’s attorney at a hearing in March why the containment effort took 14 years: “This occurred in 2004. How long does it take the government to decide what to do?”


OR&R Scientists Partner with the U.S. Coast Guard to Study Oil in the Gulf of Mexico

The attorney, Erica Zilioli, said new data shows that the site is ejecting more oil into the environment than previously thought.
Before now, the government relied heavily on reports from contractors hired by Taylor Energy to estimate the size of the spill.

Later the judge asked Taylor Energy why it was seeking to block the containment effort.
The company’s attorney, Carl Rosenblum, repeated its belief that the system would not work and stir up oil on the ocean floor.

Lemelle addressed Rosenblum directly.
“Look, you tried,” he said. “But it’s still going on after all this time. Let’s get someone else to look at this.”

Based on the results the Coast Guard reported, its attorneys are preparing a motion to declare that Taylor Energy’s claims are moot and request to have the case dismissed.
They anticipate filing the motion by Friday of next week. 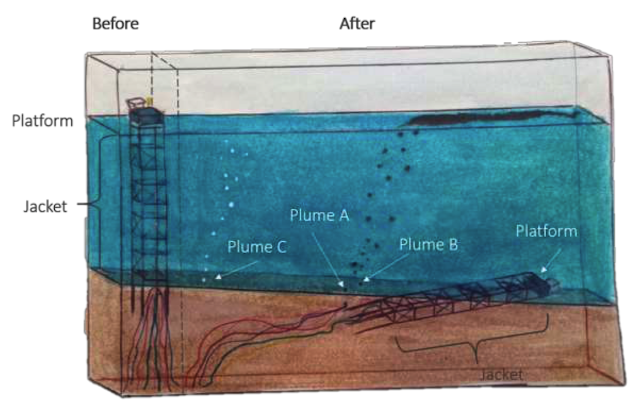 courtesy of Lessons from the taylor Energy oil spill

It would be the second legal blow to Taylor Energy in as many months.
In April, the Court of Federal Claims dismissed its earlier lawsuit seeking to reclaim more than $430 million remaining in a trust fund to plug 16 wells at the site.

U.S. Federal Claims Court Judge Nancy B. Firestone ruled against the company’s claim that the federal government should not be allowed to control its funds indefinitely as it determines how to address the spill.

Firestone said the trust contract is valid until the Interior Department says, in writing, that Taylor Energy “has complied with all of its obligations under the . . . agreement,” the ruling said.

A group that was allowed to join on behalf of the Coast Guard in the current lawsuit cheered the revelation of the containment system’s success.

“After 14 years, we are glad the Coast Guard is taking action to contain this runaway oil spill,” said Dustin Renaud, a spokesman for the group, Healthy Gulf.
“Now we must make sure that they follow through on a permanent solution and ensure a spill like this never goes unchecked again.”