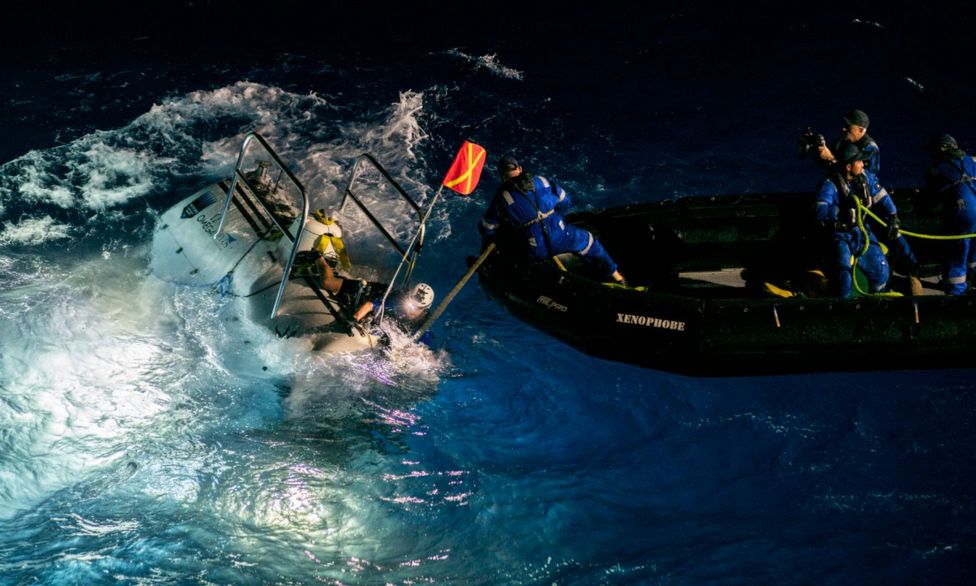 An American explorer has found plastic waste on the seafloor while breaking the record for the deepest ever dive.
Victor Vescovo descended nearly 11km (seven miles) to the deepest place in the ocean - the Pacific Ocean's Mariana Trench.

He spent four hours exploring the bottom of the trench in his submersible, built to withstand the immense pressure of the deep.
He found sea creatures, but also found a plastic bag and sweet wrappers.
It is the third time humans have reached the ocean's extreme depths. 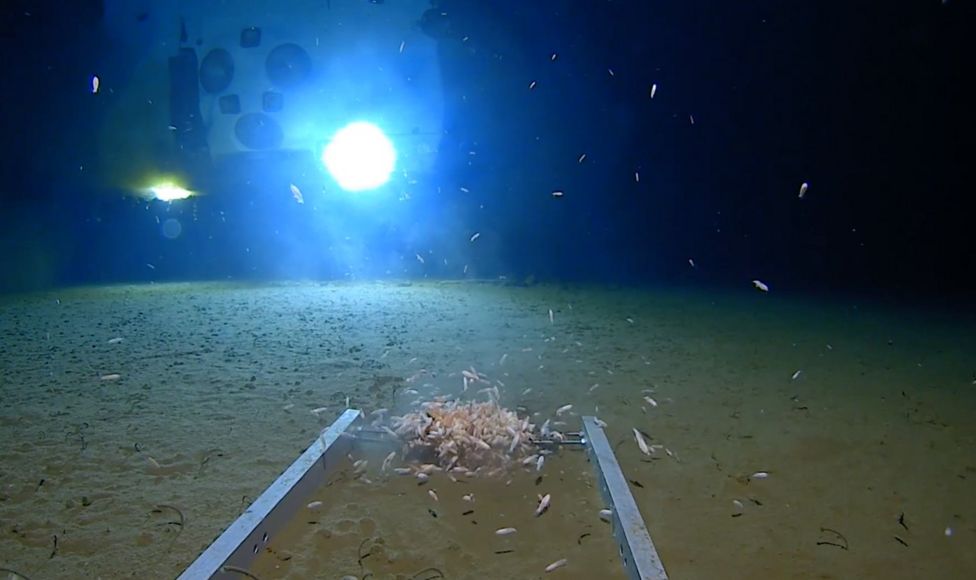 The Five Deeps Expedition successfully dived to the deepest point in the Indian Ocean, in the Java Trench. During one dive, what is believed to be a new species of Jellyfish was recorded on video.photo : Atlantic productions dor Discovery Channel

The first dive to the bottom of the Mariana Trench took place in 1960 by US Navy lieutenant Don Walsh and Swiss engineer Jacques Piccard in a vessel called the bathyscaphe Trieste.
Movie director James Cameron then made a solo plunge half a century later in 2012 in his bright green sub.

The latest descent, which reached 10,927m (35,849ft) beneath the waves, is now the deepest by 11m - making Victor Vescovo the new record holder. 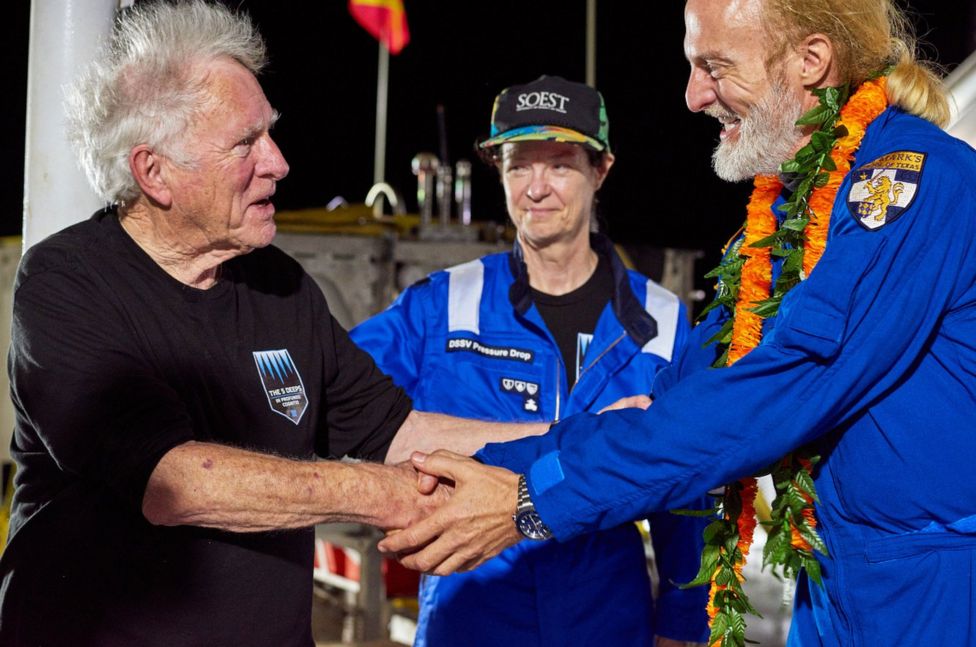 Don Walsh (left), who dived to the bottom of the Mariana Trench in 1960,
congratulated Victor Vescovo (right)
photo : Reeve Jolliffe

In total, Mr Vescovo and his team made five dives to the bottom of the trench during the expedition. Robotic landers were also deployed to explore the remote terrain.
Mr Vescovo said: "It is almost indescribable how excited all of us are about achieving what we just did.
"This submarine and its mother ship, along with its extraordinarily talented expedition team, took marine technology to a ridiculously higher new level by diving - rapidly and repeatedly - into the deepest, harshest, area of the ocean."

Witnessing the dive from the Pacific was Don Walsh.
He told BBC News: "I salute Victor Vescovo and his outstanding team for the successful completion of their historic explorations into the Mariana Trench.
"Six decades ago, Jacques Piccard and I were the first to visit that deepest place in the world's oceans.
"Now in the winter of my life, it was a great honour to be invited on this expedition to a place of my youth."

The team believes it has discovered four new species of prawn-like crustaceans called amphipods, saw a creature called a spoon worm 7,000m-down and a pink snailfish at 8,000m.
They also discovered brightly coloured rocky outcrops, possibly created by microbes on the seabed, and collected samples of rock from the seafloor.

Humanity's impact on the planet was also evident with the discovery of plastic pollution.
It's something that other expeditions using landers have seen before.
Millions of tonnes of plastic enter the oceans each year, but little is known about where a lot of it ends up. 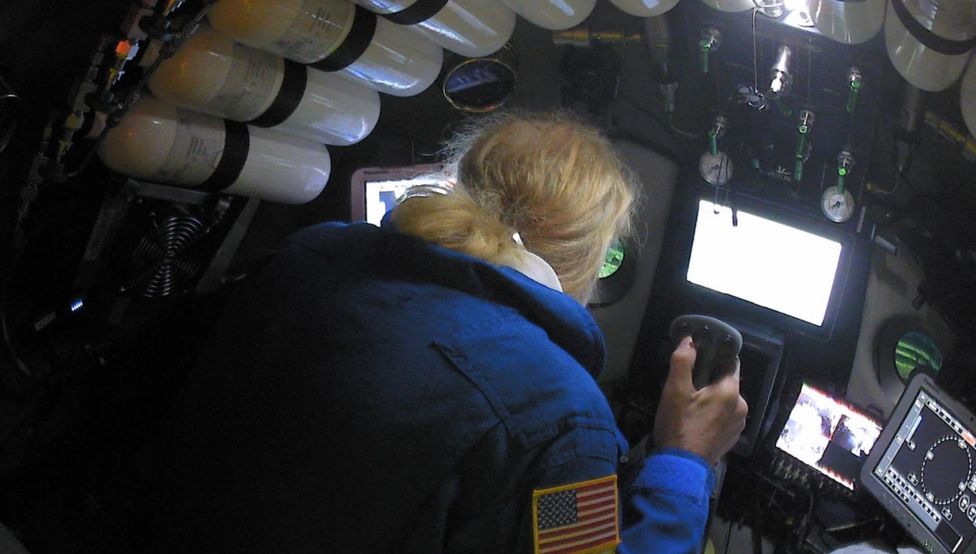 The scientists now plan to test the creatures they collected to see if they contain microplastics - a recent study found this was a widespread problem, even for animals living in the deep.
The dive forms part of the Five Deeps expedition - an attempt to explore the deepest points in each of the world's five oceans.
It has been funded by Mr Vescovo, a private equity investor, who before turning his attention to the ocean's extreme depths also climbed the highest peaks on the planet's seven continents. 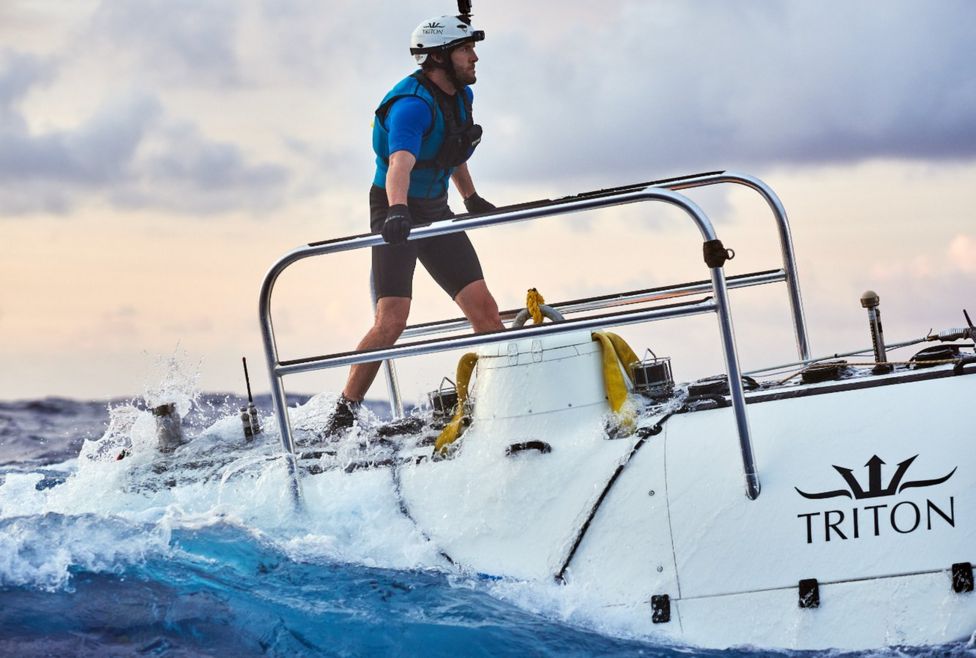 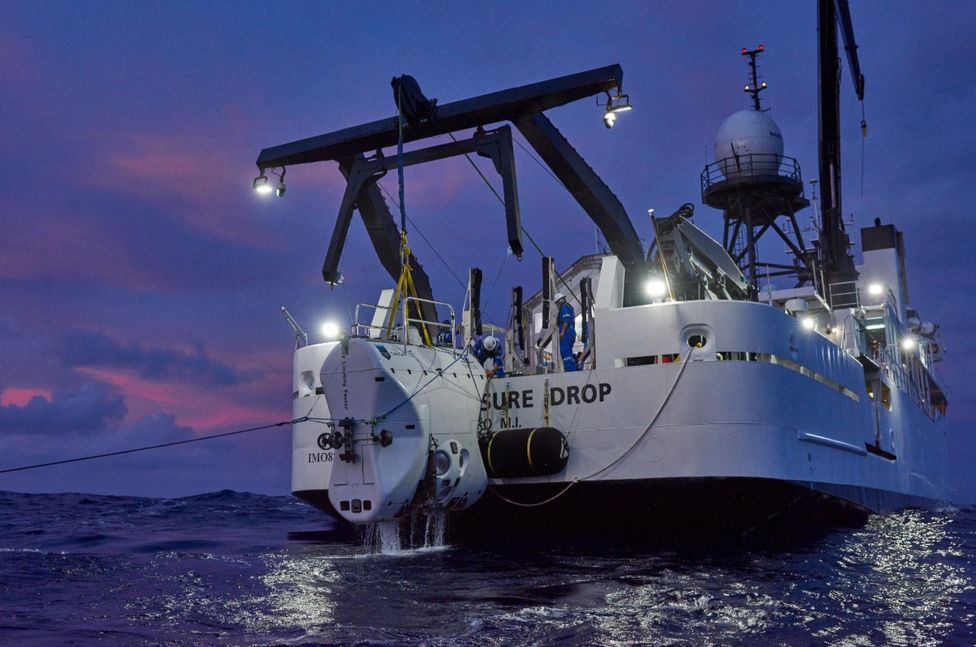 After the record dive, the submersible was brought back on the expedition's main vessel - the DSSV Pressure Drop

The final challenge will be to reach the bottom of the Molloy Deep in the Arctic Ocean, which is currently scheduled for August 2019.

The 4.6m-long, 3.7m-high submersible - called the DSV Limiting Factor - was built by the US-based company Triton Submarines, with the aim of having a vessel that could make repeated dives to any part of the ocean.
At its core is a 9cm-thick titanium pressure hull that can fit two people, so dives can be performed solo or as a pair.
It can withstand the crushing pressure found at the bottom of the ocean: 1,000 bars, which is the equivalent of 50 jumbo jets piled on top of a person. 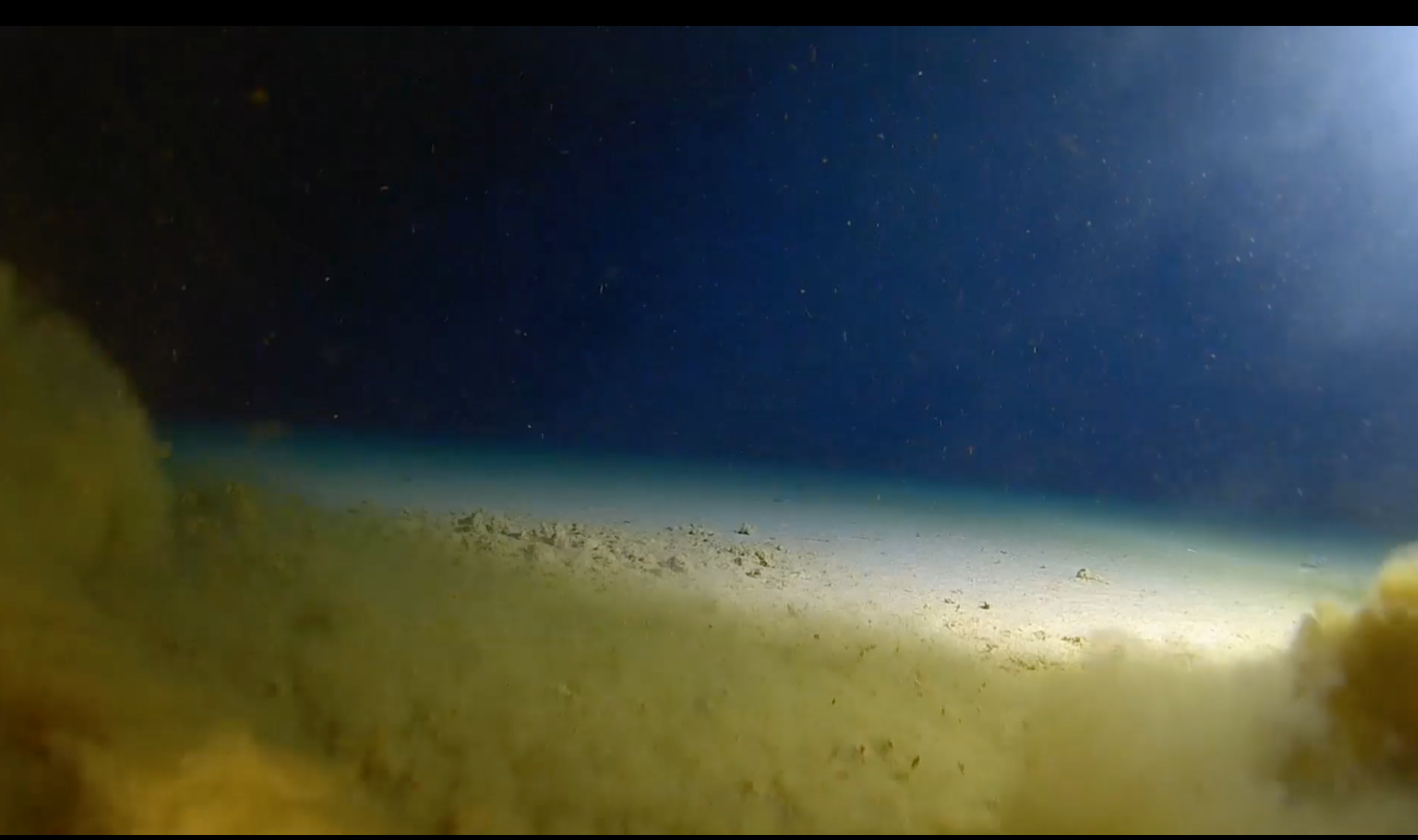 Mariana Trench
10,994 Deepest natural trench in metres
1960 First dive
3 Number of dives to date
2,146Higher than Mount Everest in metres, if inverte
Source: Deepsea Challenge/Geology.com
photo : Atlantic productions dor Discovery Channel
As well as working under pressure, the sub has to operate in the pitch black and near freezing temperatures.

On the deepest dive ever made by a human inside a submarine, a Texas investor found something he could have found in the gutter of nearly any street in the world: plastic rubbish.
Victor Vescovo, a retired naval officer, made the unsettling discovery as he descended nearly 6.8 miles (35,853 feet/10,928 meters) to a point in the Pacific Ocean's Mariana Trench that is the deepest place on Earth, his expedition said in a statement on Monday.
His dive went 52 feet (16 meters) lower than the previous deepest descent in the trench in 1960.
Vescovo found the manmade material on the ocean floor and is trying to confirm that it is plastic.

These conditions also made it challenging to capture footage - the Five Deeps expedition has been followed by Atlantic Productions for a documentary for the Discovery Channel.
Anthony Geffen, creative director of Atlantic Productions, said it was the most complicated filming he'd ever been involved with.
"Our team had to pioneer new camera systems that could be mounted on the submersible, operate at up to 10,000m below sea level and work with robotic landers with camera systems that would allow us to film Victor's submersible on the bottom of the ocean.
"We also had to design new rigs that would go inside Victor's submersible and capture every moment of Victor's dives."

After the Five Deeps expedition is complete later this year, the plan is to pass the submersible onto science institutions so researchers can continue to use it.
The challenges of exploring the deep ocean - even with robotic vehicles - has made the ocean trenches one of the last frontiers on the planet.
Once thought to be remote, desolate areas, the deep sea teems with life.
There is also growing evidence that they are carbon sinks, playing a role in regulating the Earth's chemistry and climate.