Surprising new study finds that the number of fishing vessels more than doubled to 3.7 million between 1950 and 2015.
These findings reinforce the urgent need for increased transparency of fishing activity to improved management.
The United Nations says 90% of the world's fisheries have collapsed, and the Chinese are the biggest culprits.
By a long way, China has the world's largest deep sea fishing fleet including 2,600 mega trawlers stripping the ocean floor.
They're helping satisfy China's insatiable appetite for seafood.
The Chinese eat more than a third of the world's fish supplies.
Despite tough new laws to help ensure stock, there are serious concerns about how long it can be sustained.
From ScienceMag by Erik Stokstad

The number of boats harvesting seafood has increased significantly since the middle of the previous century, a new global analysis finds, and is much higher than some scientists assumed.
Meanwhile, ships’ motors are getting larger, expanding their range and ability to bring more fish to port.
But as competition increases, fish stocks are being taxed and it is taking more effort to find fish, the researchers warn.
The trend is likely to continue, they say, and highlights the need to improve fisheries management in many places.

“The new study is a big step forward” in understanding the nature of global fishing, says fisheries biologist Ray Hilborn of the University of Washington in Seattle who was not involved with the work.

The fishing fleet is out in full force on this night transit from #Taipei to #Japan. pic.twitter.com/XdRVlq84ex
— Ricky Arnold (@astro_ricky) May 26, 2018


Previous studies of global fishing fleets have typically relied on intergovernmental agencies, such as the Food and Agriculture Organization of the United Nations, which don’t have complete records.
For the new work, Yannick Rousseau—a graduate student in the lab of Reg Watson, a fisheries ecologist at the University of Tasmania in Hobart, Australia—gathered additional data from about 100 countries, examining local reports, national registries, and scientific papers.
Rousseau was able to analyze trends for three groups of vessels: both motorized and unmotorized small-scale fishing boats, often called artisanal, and industrial fishing boats, which are typically longer than 12 meters and can go farther offshore.

The number of ships more than doubled to 3.7 million between 1950 and 2015, the team reports this week in the Proceedings of the National Academy of Sciences; in Asia, the number quadrupled.
Another important trend is the spread of motors.
In the 1950s, only about 20% of fishing vessels around the world had motors; by 2015, 68% did, most with power under 50 kilowatts—a small engine, or outboard motor, for example.

Tabulating all these figures, Rousseau and his co-authors found that the combined engine power of small vessels equals that of the industrial fleet.
“It was a very counterintuitive result,” Rousseau says, given the public and political attention attracted by large fishing vessels. 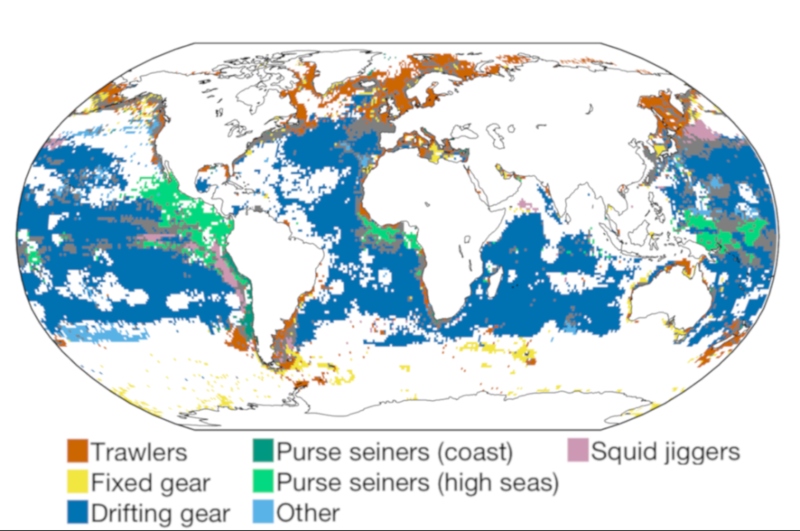 Still, just because a fleet of small boats boasts as much engine power as large trawlers “doesn’t mean it will have the same impacts,” cautions Ratana Chuenpagdee, a policy expert at Memorial University of Newfoundland in St.
John’s, Canada, who studies small-scale fisheries.
The type of fishing gear influences ecological health, she notes, and politics can play a strong role, too.
When a community has control over the resource, a fleet of local boats may have more incentive to conserve the fish stocks than a large ship from overseas.

The huge engines used today in industrial fisheries allow boats to go much faster and farther, spend more time catching fish in distant waters, and store them in freezers.
“The killing power of these vessels goes up,” Watson says.
“It really ups the game.”

But compared with ships in the 1950s, today’s global fleet catches only 20% as much fish for the same amount of effort.
This metric—called catch per unit effort, sometimes measured by days at sea—is a key indicator of fish population size and responsible management, which limits the number of fishing vessels or stops them from overfishing.
These actions have stabilized fish stocks in the past 2 decades in North America, Western Europe, and Australia, where government regulators have tightened the rules and subsidies have made it more attractive to retire ships.
Not so in Southeast Asia, the Mediterranean, and Latin America.


The BBC investigates illegal and unsustainable fishing off the west coast of Africa to find out how one of the most fertile ecosystems on earth has been pushed to the brink.

The situation could get worse.
At current rates, the researchers expect a million more fishing vessels to become motorized by 2050, and engine power will increase on others.
Fleets of larger vessels will continue to move into territorial waters of other countries and also into the high seas.
These trends will make it harder to sustainably exploit fish stocks, Watson says.
“We haven’t reached the peak of intensive fishing.”

Many developing nations will need help to improve their fisheries management, Watson says, as well as better information on fish stocks.
The new data on vessels could help.
In places where biologists have not assessed the size of fish populations, they could use information about the fleets to estimate the pressure on local stocks.

Fisheries scientists and marine ecologists will also be interested in the new data to better understand the global picture, Hilborn says.
“It will be the basis of a lot of further work.”