Lifting off from Marina South Pier in Singapore with 3D printed consumables from Wilhelmsen’s onshore 3D printing micro-factory, the Airbus Skyways drone navigated autonomously along pre-determined ‘aerial-corridors’ in its 1.5km flight to Eastern Working Anchorage.
The drone landed on the deck of the Swire Pacific Offshore (SPO)’s Anchor Handling Tug Supply (AHTS) vessel, M/V Pacific Centurion and deposited its 1.5kg cargo without a hitch before returning to its base.
The entire delivery, from take-off towards the vessel, to landing back at base, took just ten minutes. 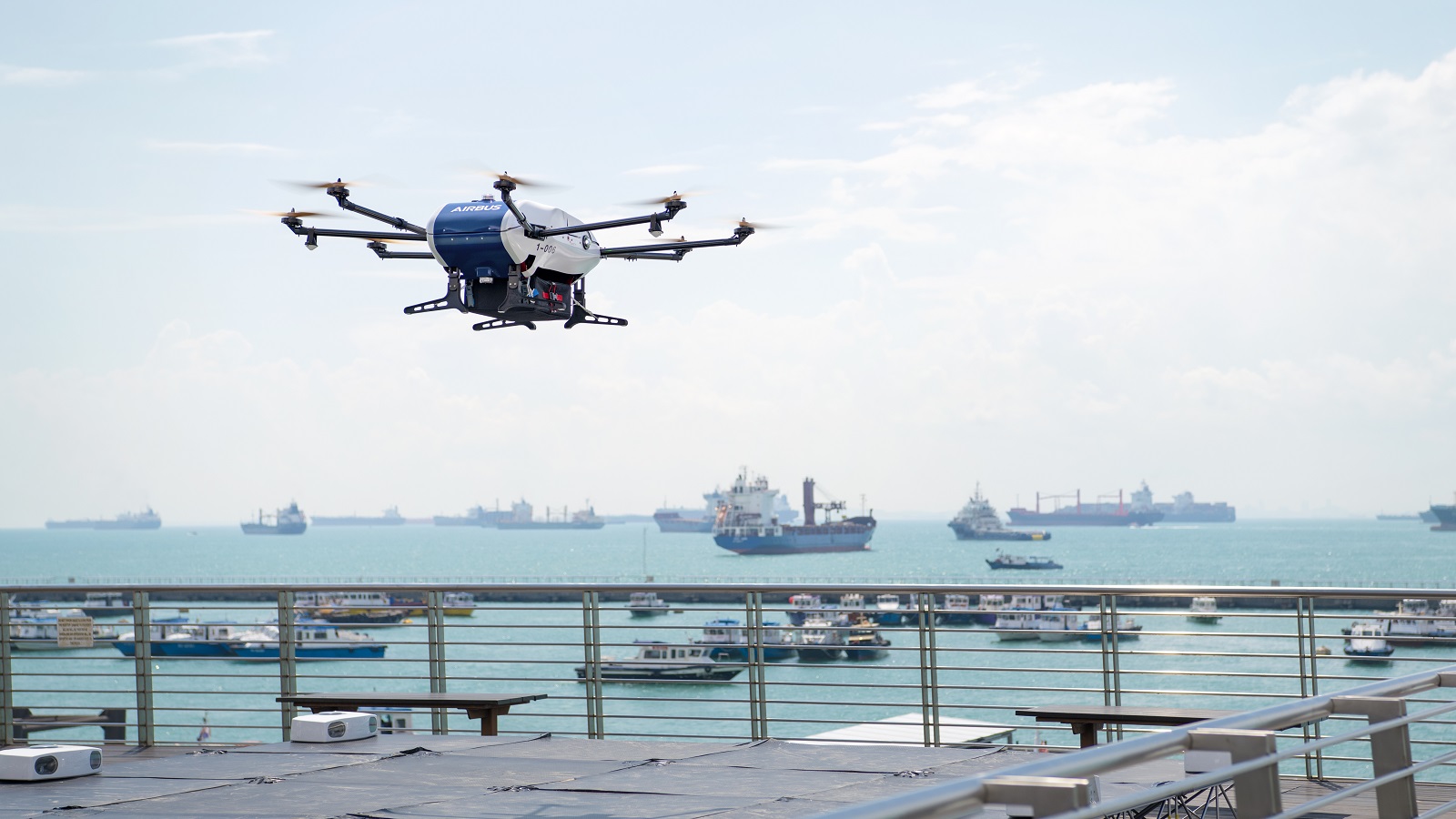 Though small drone delivery trials from tugboat to ship have been conducted before by a number of shipping companies and service providers, shore-to-ship delivery of this range and scope has never been explored, prior to this trial.

Commenting on the successful first delivery flight, Marius Johansen, VP Commercial, Wilhelmsen Ships Agency says, “The now proven, seamless operation of drone deliveries from shore-to-ship, in one of the world’s busiest ports, proves the hard work, investment and faith we, and indeed our partners, placed in the Agency by Air drone delivery project over the past two years was not misplaced”.

Operations began with a Toolbox Talk with the Wilhelmsen, Airbus and SPO crew to ensure that the risk assessment was understood by all parties.
With final safety checks completed, Wilhelmsen’s Marina South Pier team loaded the drone.
Supported by spotters stationed on board the vessel deck to ensure the safety of the crew and vessel, the drone took off towards the vessel, landing on the dedicated area on the main deck where the parcel was retrieved by the officer on board. 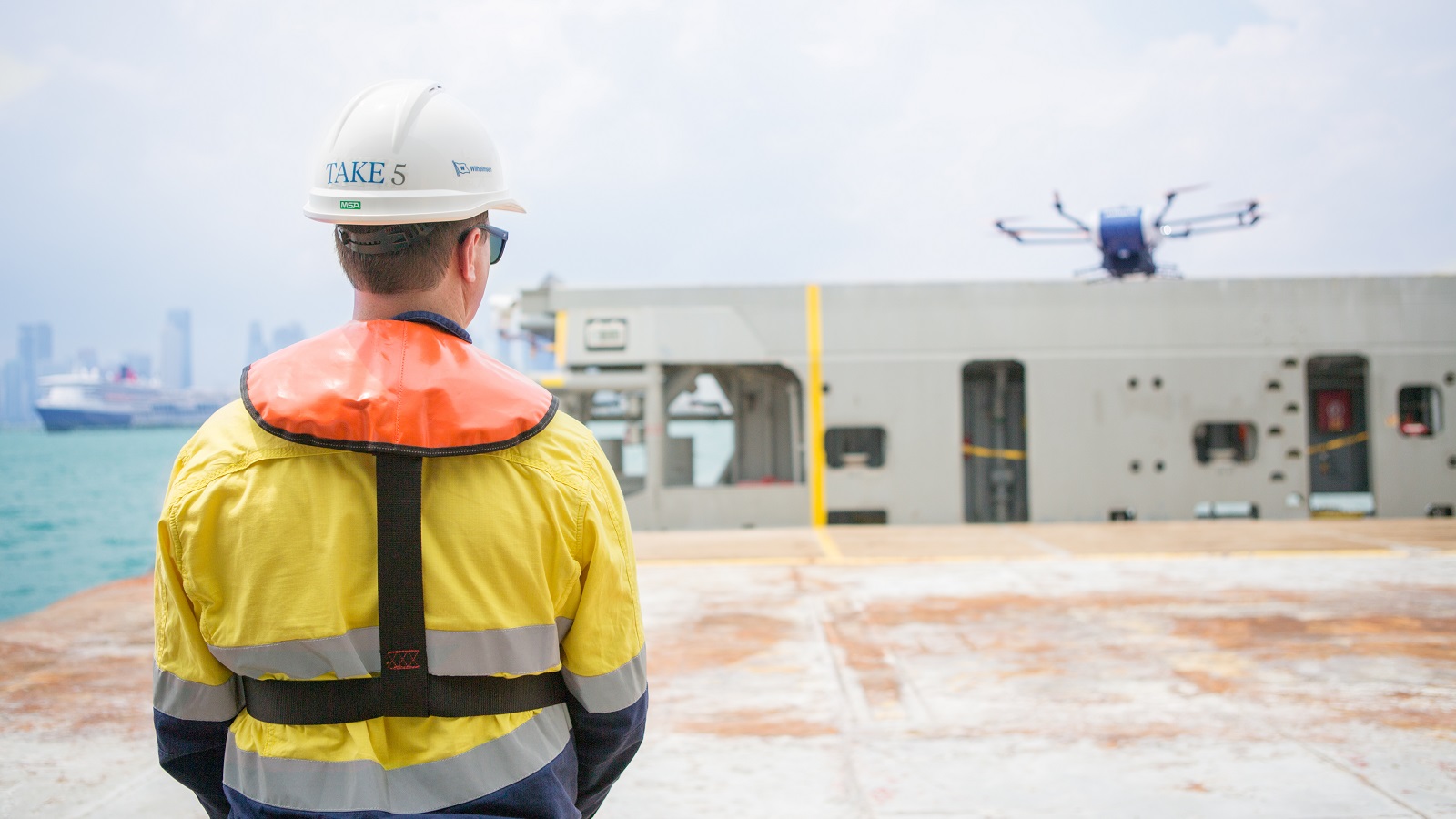 Offering a more cost effective, quicker and safer means of delivering, small, time-critical items to vessels, Wilhelmsen sees delivery by drone, rather than launch boat, as part and parcel of their continued evolution of the agency business. 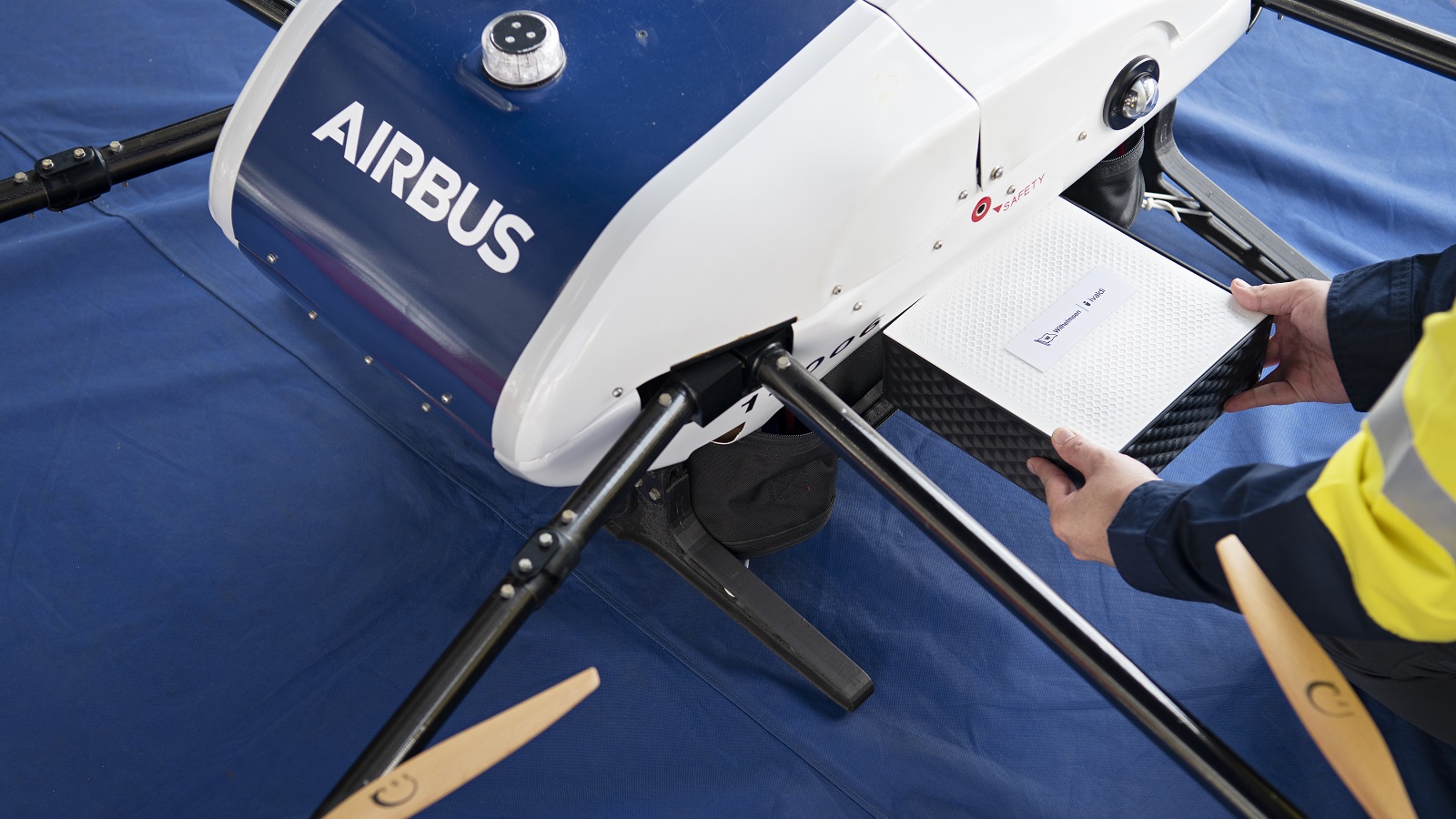 Johansen adds, “Delivery of essential spares, medical supplies and cash to Master via launch boat, is an established part of our portfolio of husbandry services, which we provide day in and day out, in ports all over the world.
Modern technology such as Unmanned Aircraft Systems (UAS), is just a new tool, albeit a very cool one, with which we can push our industry ever forward and improve how we serve our customers”.

Less labour dependent than delivery via launch, autonomous Unmanned Aerial Vehicles (UAVs) can potentially reduce delivery costs by up to 90% in some ports and have a smaller carbon footprint than launch boats.

SPO has been an important partner during the detailed final preparation and operational testing of the drone, with the provision of its Anchor Handling Tug Supply (AHTS) vessels. 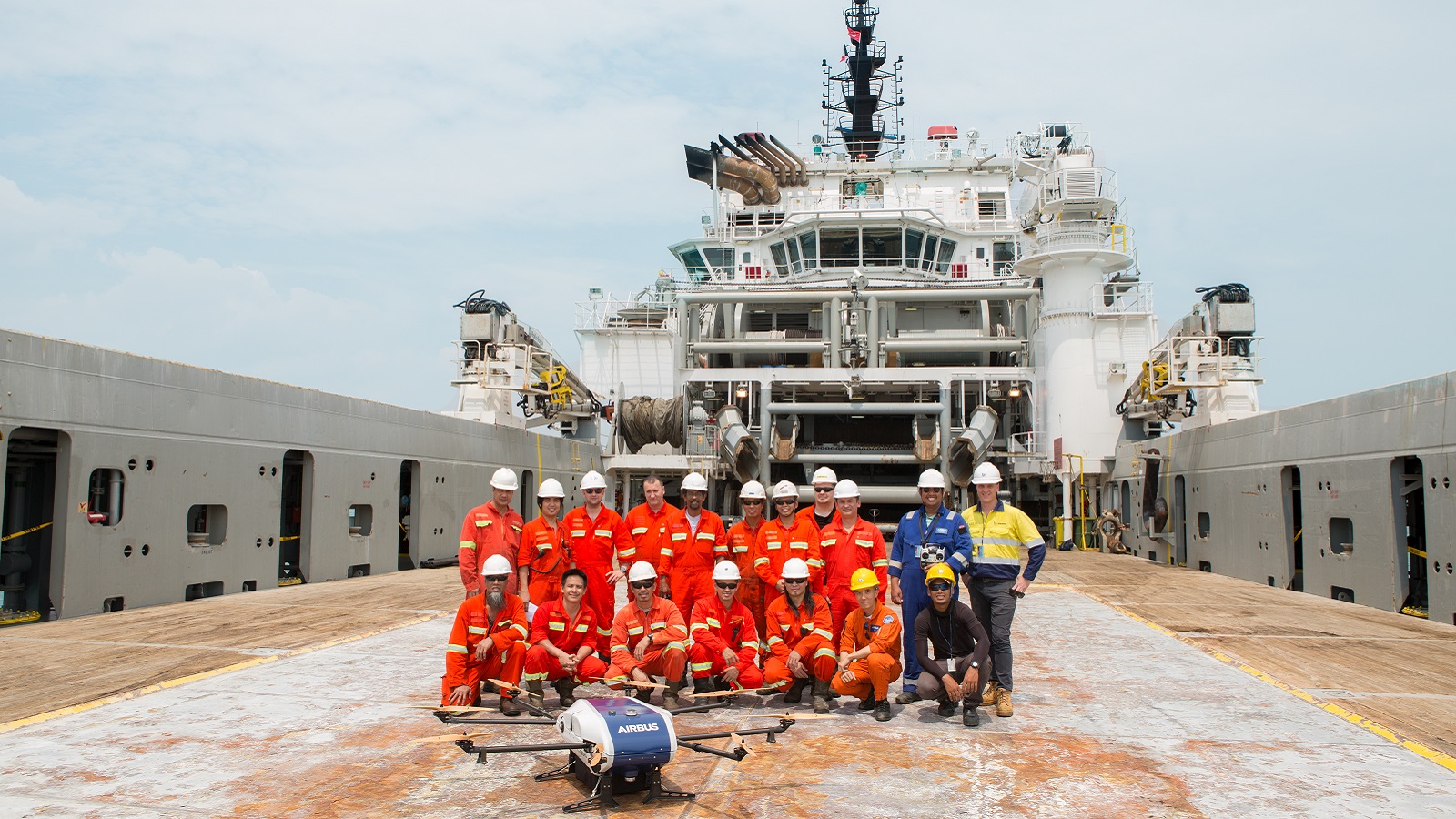 Signing a unique MOU with aeronautics company Airbus in June 2018, Wilhelmsen was tasked with setting up the necessary maritime and port operations, gaining relevant approvals from port authorities, with Airbus the overall Skyways system architect and provider, contributing its expertise in aeronautical vertical lift solutions to develop the UAS for shore-to-ship deliveries.

"We are thrilled to launch the first trial of its kind in the maritime world.
Today’s accomplishment is a culmination of months of intense preparation by our dedicated team, and the strong collaboration with our partner, as we pursue new terrain in the maritime industry," says Leo Jeoh, Airbus Skyways Lead. 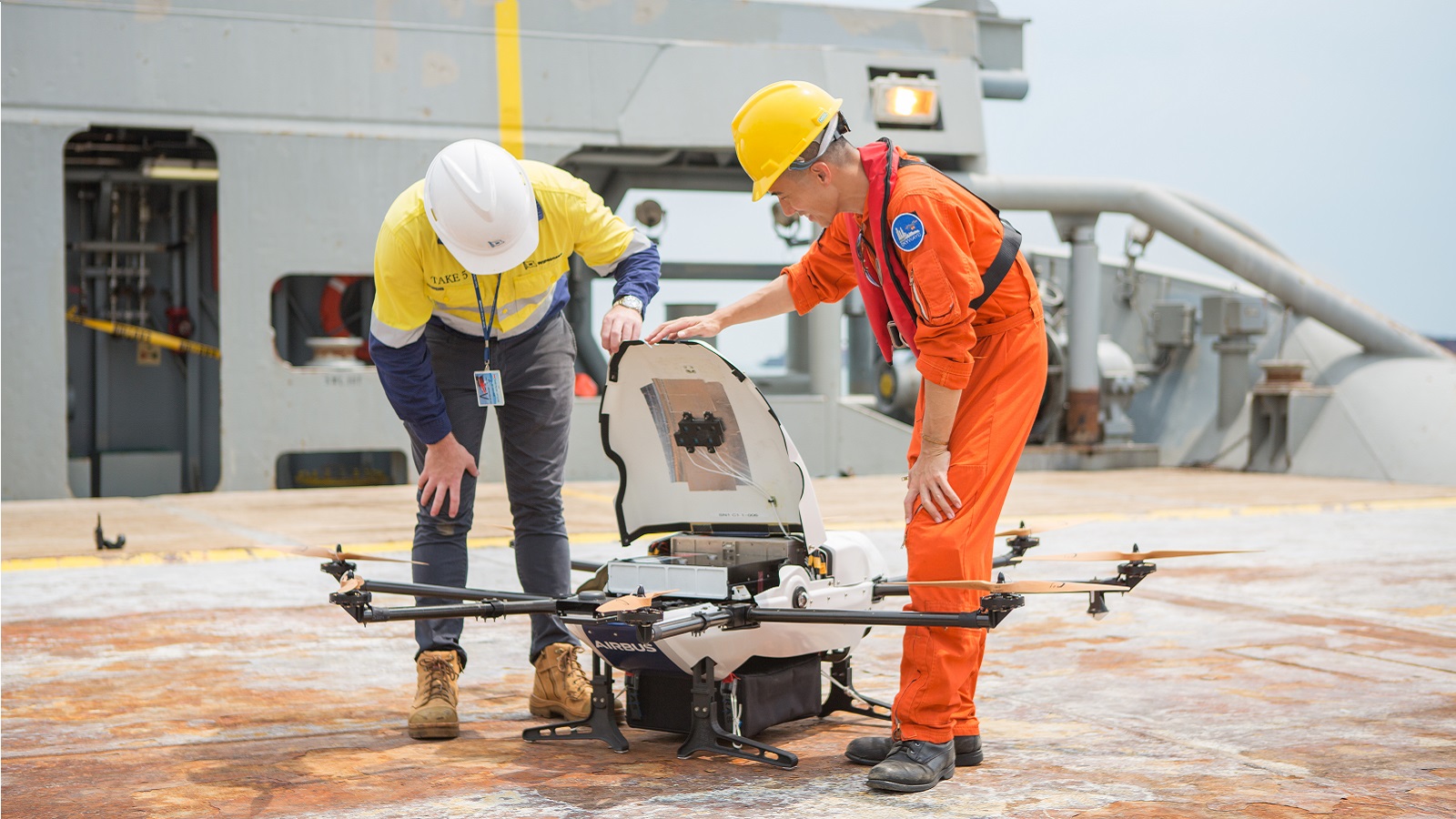 The ongoing pilot trial will for now, focus on offshore supply vessels at anchorage 1.5km from the pier.
With operational safety as a priority, flights will be limited to this distance for the time being, before the flight range is gradually ­­extended to as far as 3km from the shore. 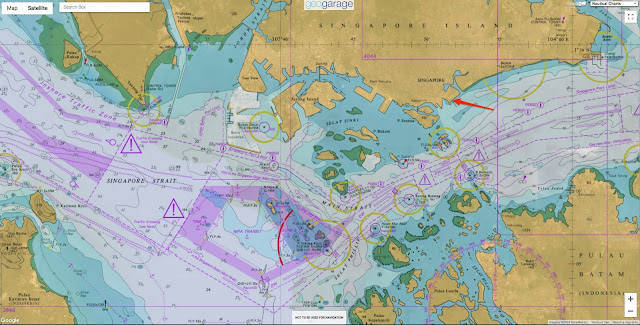 The Maritime and Port Authority of Singapore (MPA) is facilitating the trial, which started in late November 2018, through the interim use of Marina South Pier as the launching and landing point for Airbus’ delivery drone.
At the same time, MPA has designated anchorages for vessels to anchor off Marina South for the trial.
The Civil Aviation Authority of Singapore is also working with Wilhelmsen and Airbus to ensure safety of the trials.