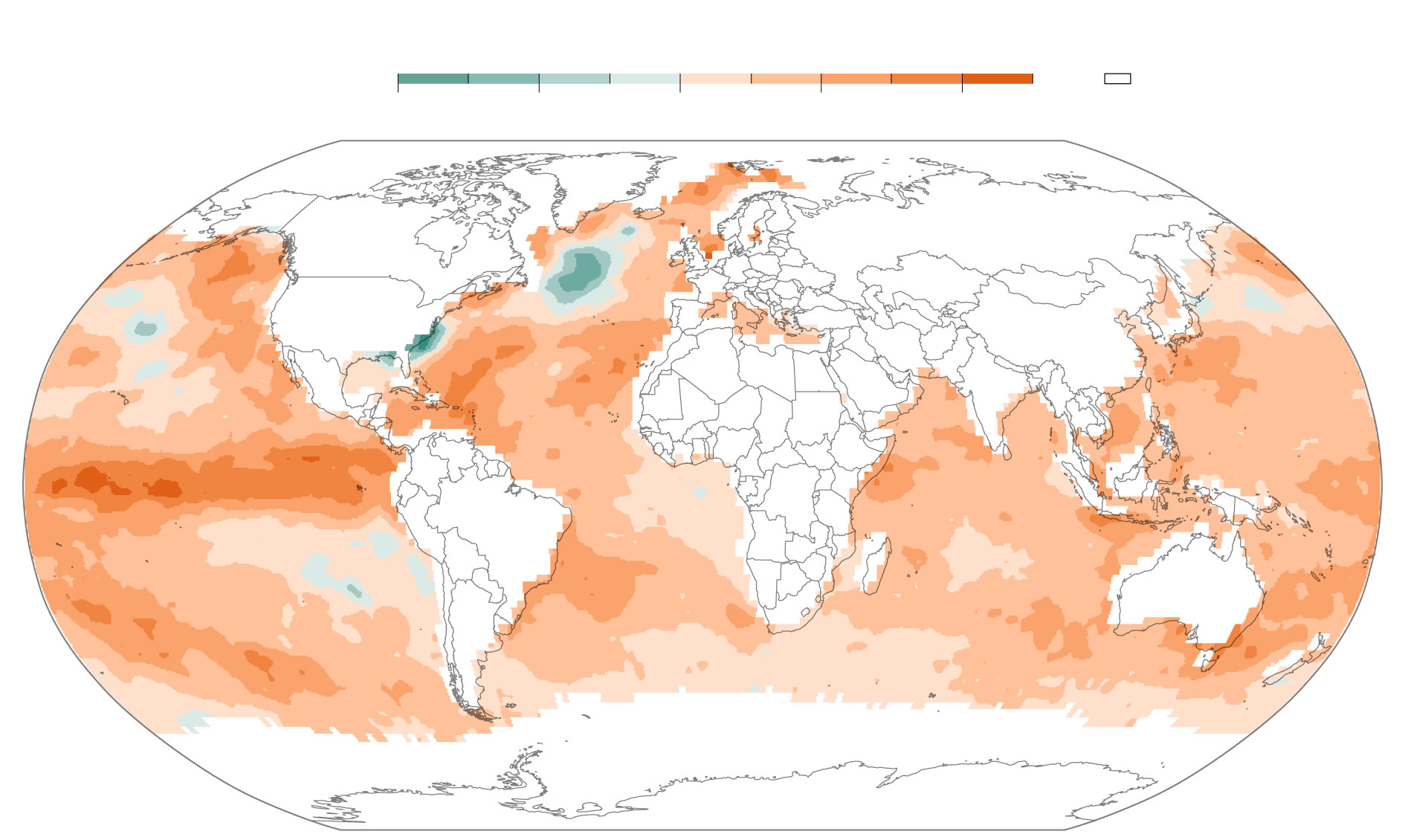 Ocean heatwaves have become far more frequent
The average number of marine heat wave days for the period 1987-2016, compared to the average for 1925-1954.
Source: Nature Climate Change | by The New York Times

The number of heatwaves affecting the planet’s oceans has increased sharply, scientists have revealed, killing swathes of sea-life like “wildfires that take out huge areas of forest”.

The damage caused in these hotspots is also harmful for humanity, which relies on the oceans for oxygen, food, storm protection and the removal of climate-warming carbon dioxide the atmosphere, they say.

Global warming is gradually increasing the average temperature of the oceans, but the new research is the first systematic global analysis of ocean heatwaves, when temperatures reach extremes for five days or more.

As heatwaves have increased, kelp forests, seagrass meadows and coral reefs have been lost.
These foundation species are critical to life in the ocean.
They provide shelter and food to many others, but have been hit on coasts from California to Australia to Spain.

“You have heatwave-induced wildfires that take out huge areas of forest, but this is happening underwater as well,” said Dan Smale at the Marine Biological Association in Plymouth, UK, who led the research published in Nature Climate Change.
“You see the kelp and seagrasses dying in front of you.
Within weeks or months they are just gone, along hundreds of kilometres of coastline.” 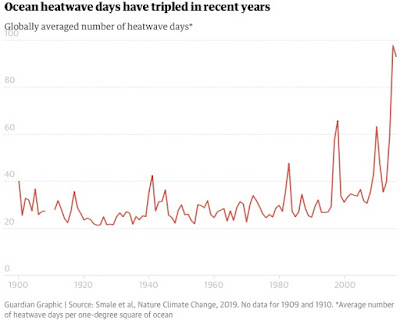 As well as quantifying the increase in heatwaves, the team analysed 116 research papers on eight well-studied marine heatwaves, such as the record-breaking “Ningaloo Niño” that hit Australia in 2011 and the hot “blob” that persisted in the north-east Pacific from 2013 to 2016.
“They have adverse impacts on a wide range of organisms, from plankton to invertebrates, to fish, mammals and seabirds,” Smale said. 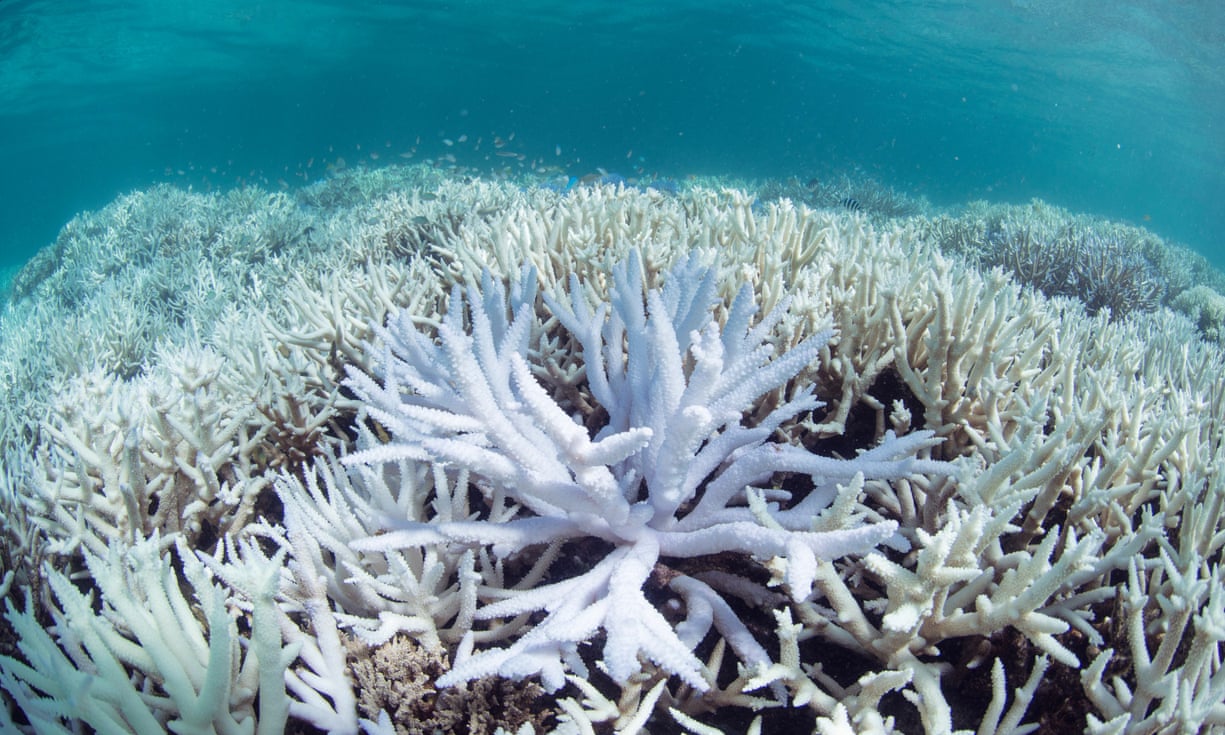 The scientists compared the areas where heatwaves have increased most with those areas harbouring rich biodiversity or species already near their temperature limit and those where additional stresses, such as pollution or overfishing, already occur.
This revealed hotspots of harm from the north-east Atlantic to the Caribbean to the western Pacific.
“A lot of ocean systems are being battered by multiple stresses,” Smale said.

The natural ocean cycle of El Niño is a key factor in pushing up temperatures in some parts of the ocean and the effect of global warming on the phenomenon remains uncertain, but the gradual overall heating of the oceans means heatwaves are worse when they strike. 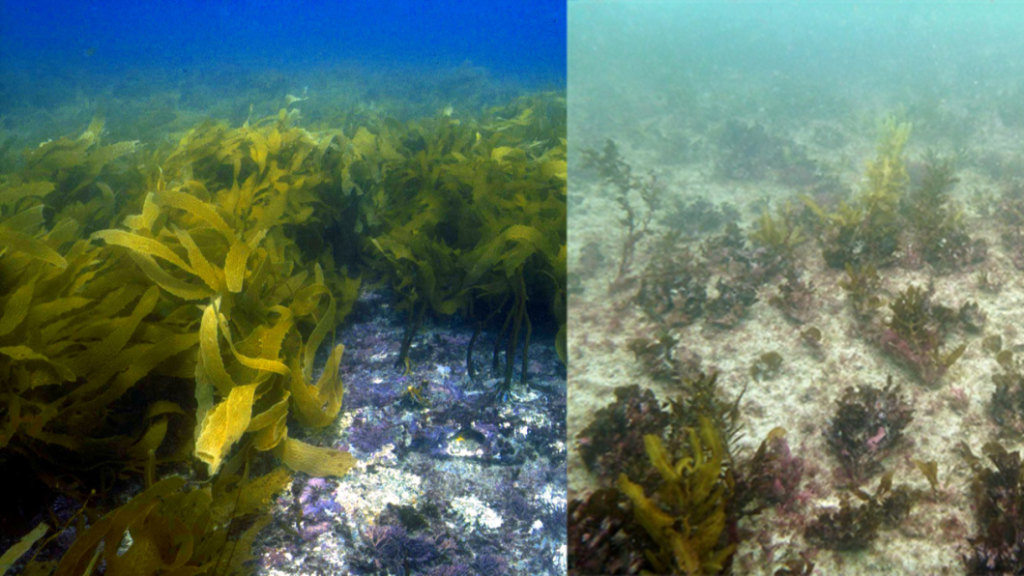 Before and after the 2011 marine heatwave off the WA coast and its effects on kelp.
credit : J. Costa, S. Bennett

“The starting temperature is much higher, so the absolute temperatures [in a heatwave] are that much higher and more stressful,” said Smale.
Some marine wildlife is mobile and could in theory swim to cooler waters, but ocean heatwaves often strike large areas more rapidly than fish move, he said.

The researchers said ocean heatwaves can have “major socioeconomic and political ramifications”, such as in the north-west Atlantic in 2012, when lobster stocks were dramatically affected, creating tensions across the US-Canada border.

“This [research] makes clear that heatwaves are hitting the ocean all over the world … The ocean, in effect, is spiking a fever,” said Prof Malin Pinsky, at Rutgers University, US, and not part of the team.
“These events are likely to become more extreme and more common in the future unless we can reduce greenhouse gas emissions.”

Dr Éva Plagányi at the Commonwealth Scientific and Industrial Research Organisation (CSIRO) in Australia also likened ocean heatwaves to wildfires.
“Frequent big hits can have long-lasting effects,” she said.
“This study shows that record-breaking events are becoming the new normal.” 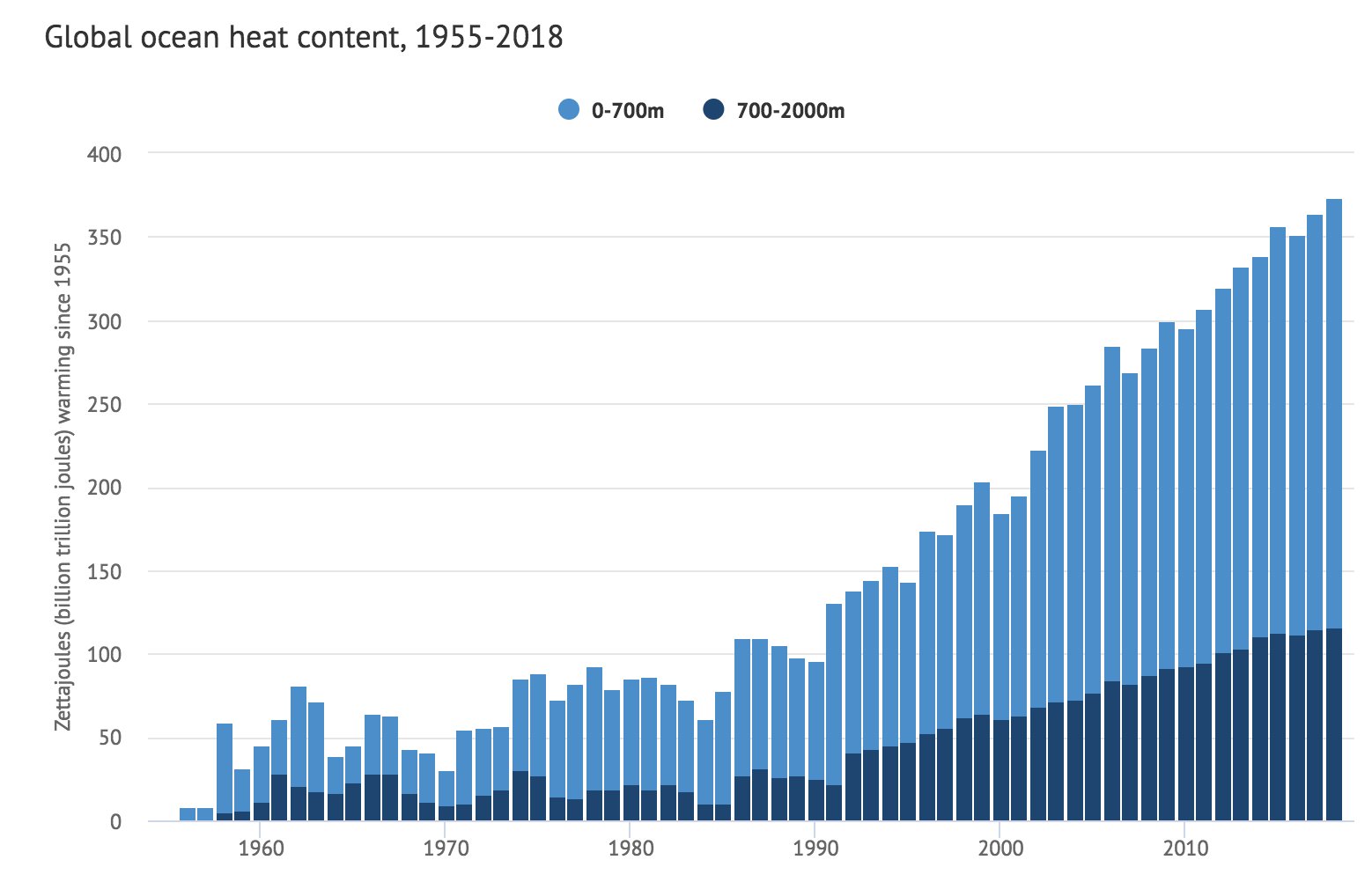 On a related note, the increase in ocean heat content in 2018 – about 9 zettajoules – is around 18 times more than the total energy used by everyone on Earth in 2018.
ScienceMag : Improved estimates of ocean heat content from 1960 to 2015

The damage global warming is causing to the oceans has also been shown in a series of other scientific papers published in the last week.
Ocean warming has cut sustainable fish catches by 15% to 35% in five regions, including the North Sea and the East China Sea, and 4% globally, according to work published by Pinsky and colleagues.

“We were stunned to find that fisheries around the world have already responded to ocean warming,” he said.
Another study showed that achieving the 2C climate change target set out in the Paris agreement would protect almost 10m tonnes of fish catches each year, worth tens of billions of dollars.

Separate work by Plagányi’s team showed that climate change will reverse the recovery of whales in the Southern Ocean by damaging the krill on which they feed.
“Models predict concerning declines, and even local extinctions by 2100, for Pacific populations of blue and fin whales, and Atlantic and Indian Ocean fin and humpback whales,” they said.

“In the space of one week, scientific publications have underscored that unless we take evasive action, our future oceans will have fewer fish, fewer whales and frequent dramatic shifts in ecological structure will occur, with concerning implications for humans who depend on the ocean,” said Plagányi.