A group of scientists from across the globe have revealed the stunning details of a submarine canyon on the edge of the country's continental shelf, after mapping an area twice the size of Malta.

Read more at: https://phys.org/news/2018-08-scientists-reveal-submarine-canyon-edge.html#jCp
A group of scientists from across the globe have revealed the stunning details of a submarine canyon on the edge of the country's continental shelf, after mapping an area twice the size of Malta.

The group will return tomorrow morning (August 10) after a research expedition onboard the RV Celtic Explorer with Holland I ROV, led by University College Cork (UCC) in Ireland, mapping 1800 km2 of seabed to image the upper canyon over a fortnight.
The find is significant in understanding more about how submarine canyon helps transport carbon to the deep ocean.
Although there is excess CO2 in the atmosphere (the greenhouse effect), the ocean is absorbing this at the surface, and canyons pump this into the deep ocean where it cannot get back into the atmosphere. 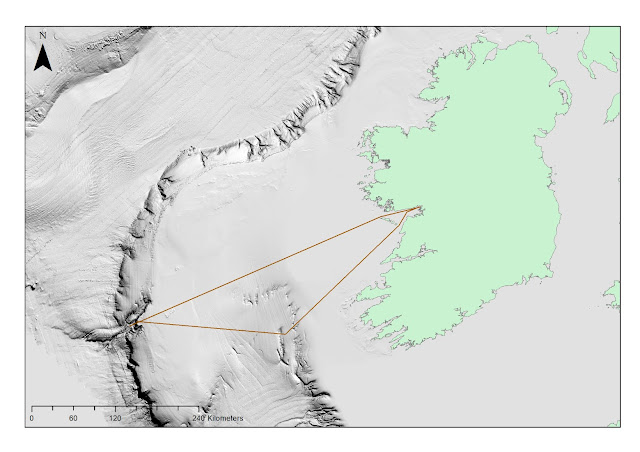 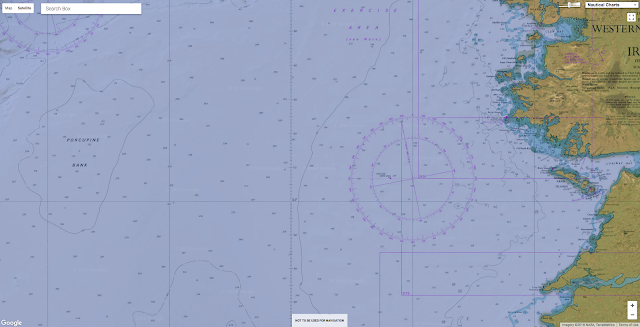 The expedition, led by Dr. Aaron Lim of UCC's School of Biological, Earth and Environmental Sciences (BEES), utilises the Marine Institute's Holland 1 Remotely Operated Vehicle (ROV) and state-of-the-art mapping technologies to reveal the nature of the canyon.
"This is a vast submarine canyon system, with near-vertical 700m cliff in places and going as deep as 3000m. You could stack 10 Eiffel towers on top of each other in there," said Dr. Lim (BEES-UCC), "So far from land this canyon is a natural laboratory from which we feel the pulse of the changing Atlantic." 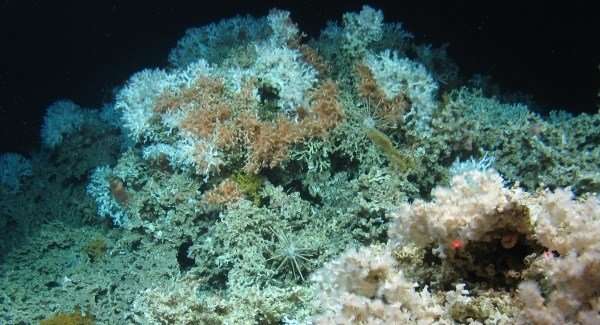 Cold water corals on the rim of the Porcupine Bank Canyon.
Credit: University College Cork According to Dr. Lim, this discovery coupled with recent findings on the Irish-Atlantic margin shows the advances in both Ireland's marine technology and scientific workforce.

"Ireland is world-class, and for a small country we punch above our weight."
The Porcupine Bank Canyon is the westernmost submarine canyon on the contiguous Irish margin 320 km west of Dingle and exits onto the abyssal plain at 4000m water depth.
The upper canyon is full of cold-water corals forming reefs and mounds which create a rim on the lip of the canyon 30m tall and 28 km long.
The coral reefs on the rim of the canyon eventually break off and slide down into the canyon where they form an accumulation of coral rubble deeper within the canyon.
The ROV ventured deeper into the canyon and found significant build-ups of coral debris that have fallen from hundreds of meters above. 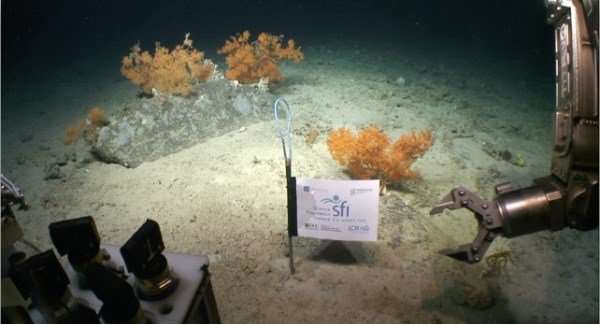 A flag planted at the Porcupine Bank Canyon.
Credit: University College Cork This is all about transporting carbon stored cold water corals into the deep.

The corals get their carbon from dead plankton raining down from the ocean surface so ultimately from our atmosphere," said Professor Andy Wheeler, School of BEES, UCC, and the Irish Centre for Research in Applied Geosciences (iCRAG).
"Increasing CO2 concentrations in our atmosphere are causing our extreme weather; oceans absorb this CO2 and canyons are a rapid route for pumping it into the deep ocean where it is safely stored away."
The new detailed maps show lobes of sediment debris and the scars from submarine slides as the canyon walls collapse.
There is also exposure of old crustal bedrock and incised channels in the canyon floor carved by sediment avalanches. 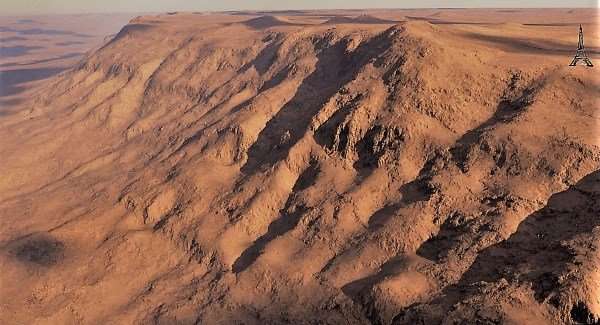 What the Porcupine Bank Canyon would look like with the sea drained out with steep cliffed edges and cold-water coral mounds in the top.
Credit: University College Cork

"We took cores with the ROV, and the sediments reveal that although the canyon is quiet now, periodically it is a violent place where the seabed gets ripped up and eroded," added Professor Wheeler.
The new mapping data shows a rim feature along the lip of the canyon at approximately 600m water depth.
"When we sent down the ROV, we saw that this rim is made of a profusion of cold water corals, which appears to extend for miles along the edge of the canyon," said Professor Luis Conti, University of Sao Paulo.