This video shows ocean temperature changes around New Zealand throughout one year.
(courtesy of NZ NIWA)

From Newshub by Scott Palmer

The water temperature in the Tasman Sea is well above normal - a whopping 6 degC more than average for the start of December.

The anomaly exists only between Australia and New Zealand
Photo credit: EarthWindMap
The increase has been driven by a La Nina climate system, and scientists say a continued warming of our ocean could permanently damage our fisheries and lead to tropical cyclones.

NIWA meteorologist Ben Noll says the "very impressive marine heatwave" has led to the largest deviation from normal temperatures in the world.
"The sea surface temperatures in the Australia-New Zealand region are presently the most anomalous on the globe," he says.
"Typical La Nina signature but intensity turned up many notches." 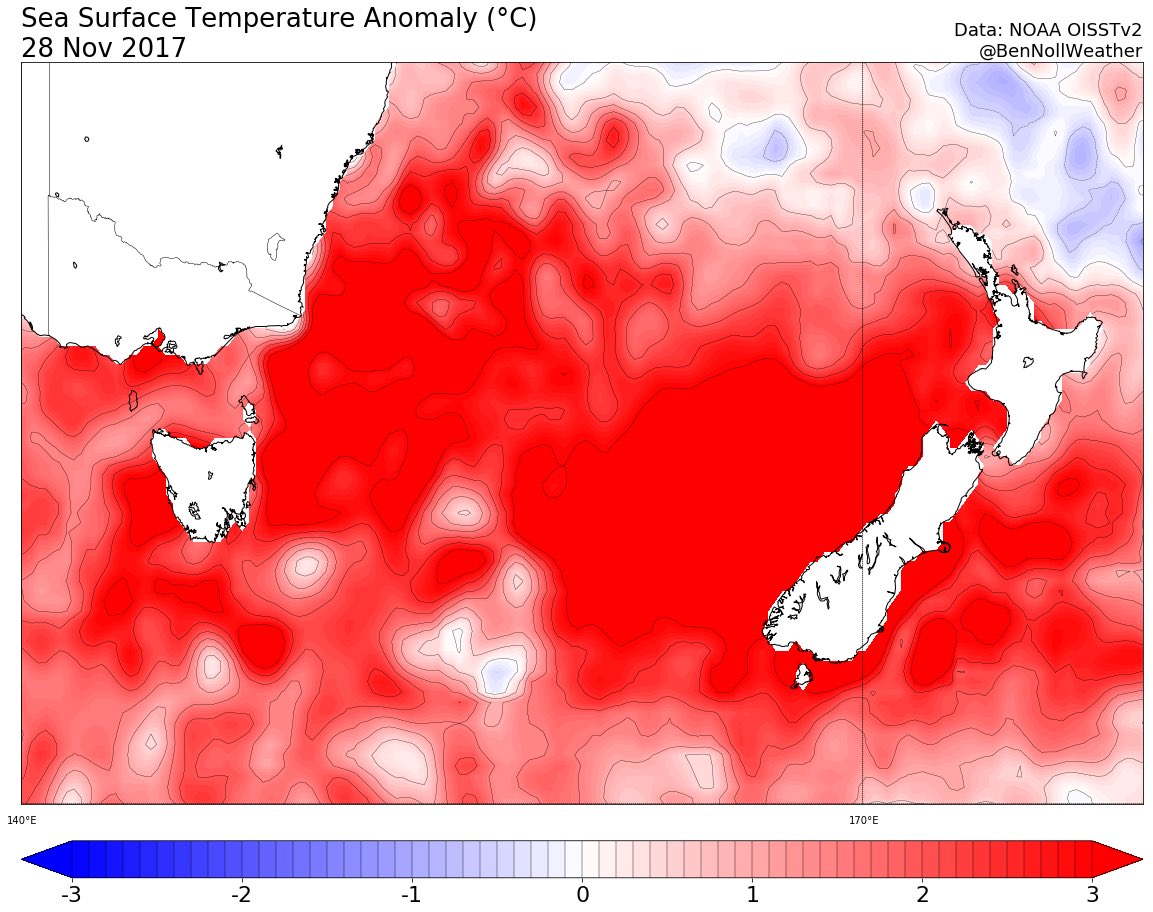 A very impressive marine heatwave is unfolding near the east coast of Australia, across the Tasman Sea, and in New Zealand coastal waters ... average anomaly is +1.98°C and max anomaly is a gaudy +6.16°C off NZ's West Coast.
courtesy of Ben Noll

Global water temperature maps show the Tasman Sea between New Zealand and Australia stands out, both with the largest increase and largest area affected.
The warmth is more than just skin-deep.
Temperature anomalies of 1degC to 3degC are being found in the top 200 metres. 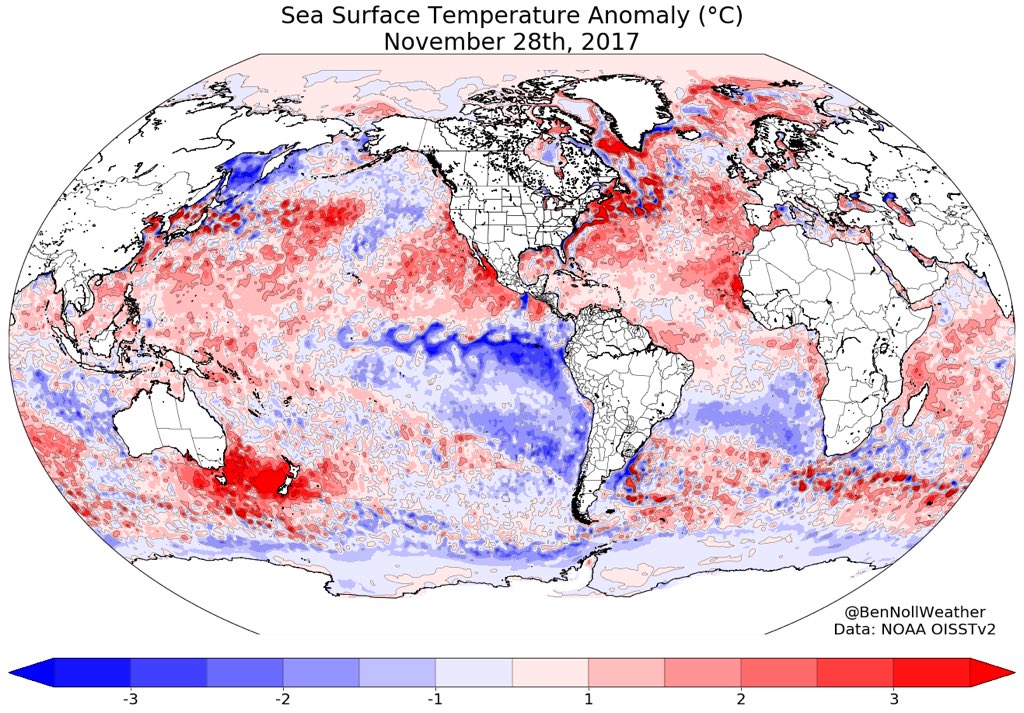 The sea surface temperatures in the Australia-New Zealand region are presently the most anomalous on the globe ... typical La Nina signature but intensity turned up many notches.
courtesy of Ben Noll
NIWA climate scientist Nava Fedaeff says this is due to the lack of storms, which churn up the ocean and reduce temperatures.
However she warns that calm conditions now could increase the strength of tropical storms and cyclones when they do hit.
"Warm seas can act like fuel," she says.
"If we do get a tropical storm this could add more moisture to the system." 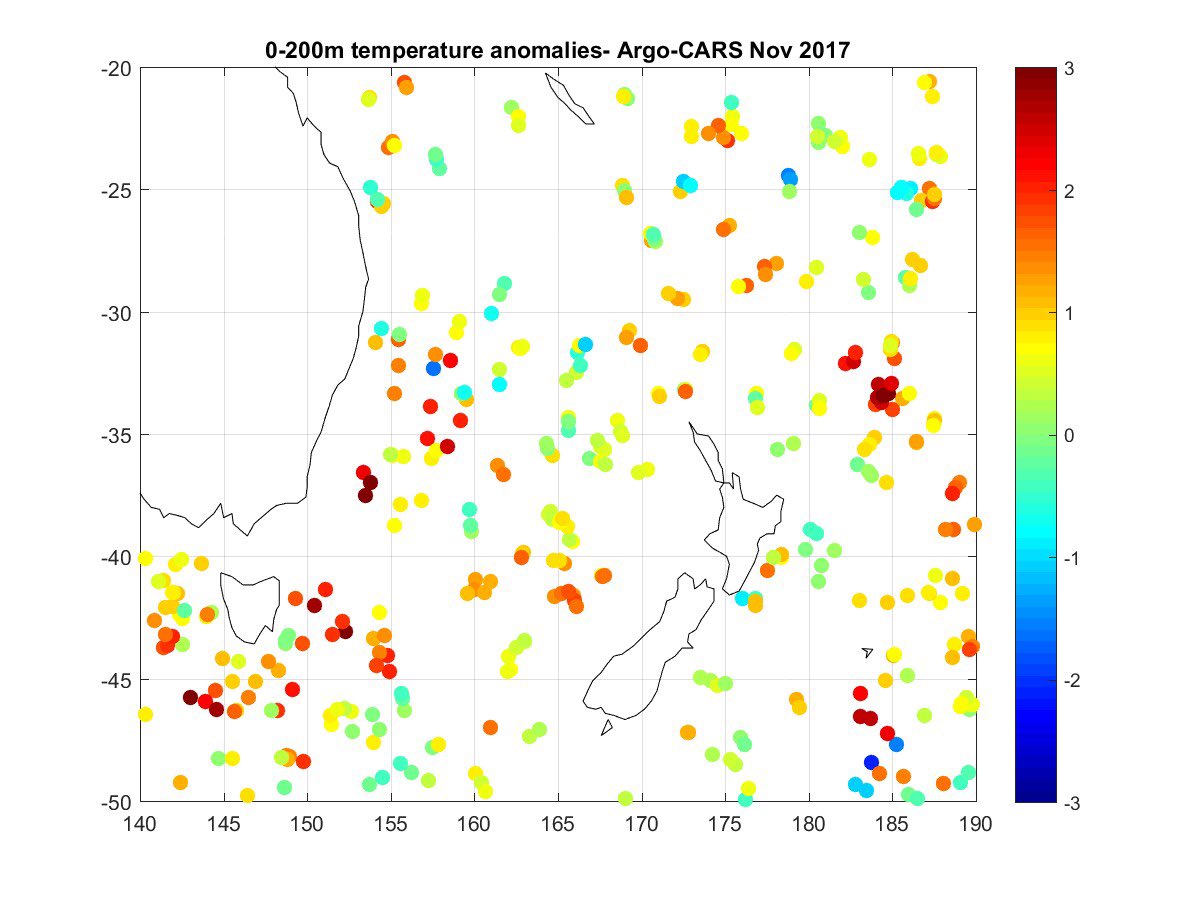 NIWA marine biogeochemist Professor Cliff Law says this ocean warming is likely to continue, and could lead to more invasive species and possibly new diseases in our fisheries.
"The average warming around New Zealand is 2.5degC by the end of this century, which will affect how the ocean mixes and the nutrients available for plankton growth, with knock-on effects on the foodweb and fisheries," he says.
"All regions will see a reduction in food supply, because of a decrease in particulate material sinking from the surface - and that is what links climate change to our fisheries."