Argentina's missing submarine: what we know

A vast search by a multinational taskforce for an Argentinian submarine that went missing in the South Atlantic with 44 crew members four days ago has failed to provide details of its possible location.
A total of 13 ships and six aeroplanes are braving strong winds and high waves over an area of 66,000 sq km (25,500 sq miles) more than 400 km (250 miles) east of the bay of San Jorge off the coast of Patagonia in southern Argentina.
Argentina’s navy said it was not sure what had happened to the submarine but said it was now convinced the ship was beneath the surface and not adrift on choppy seas, as was previously thought Search for missing Argentinian submarine fails to find any clues

From CNN by Euan McKirdy

Efforts to locate an Argentine submarine that has been missing since last week have been ramped up dramatically by a multinational search team of boats and planes, the country's navy says.
"We have tripled the search effort, both on the surface and underwater, with 10 airplanes," said Gabriel Galeazzi, a spokesman with the Mar Del Plata Argentine naval base.

Ships and aircraft from at least seven countries are scouring the southern Atlantic for the submarine ARA San Juan, which was last seen Wednesday.
"We have 11 ships from the Argentine navy, from municipalities, and from countries that have collaborated with research ships such as Uruguay, Chile, Brazil, Peru, the United States, and (the UK).
"These ships are following the submarine's planned route, (and are) sweeping the whole area and we also have navy ships sweeping from north to south and from south to north." 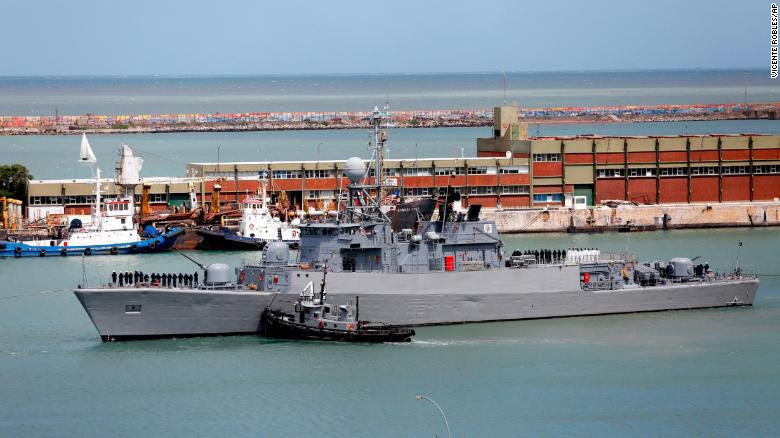 Argentine ship the Comandante Espora, part of the fleet searching for the ARA San Juan, sails from the Mar del Plata naval base on Saturday, Nov. 18, 2017.

Here's what we know -- and don't know -- about the disappearance of the ARA San Juan:

How long could the crew survive?

In a "worst-case scenario," the missing sub could run out of oxygen in two days, Argentine navy spokesman Enrique Balbi said Monday.

Under normal circumstances, the vessel has sufficient fuel, water, oil and oxygen to operate for 90 days without external help, said Balbi, and the vessel could "snorkel" -- or raise a tube to the surface -- "to charge batteries and draw fresh air for the crew."
If the sub is bobbing adrift on the surface and the hatch is open, it will have an available air supply and enough food for about 30 days, he said.
But if it is submerged and cannot raise a snorkel, its oxygen may last only about seven days.
When the sub last made contact on Wednesday, five days ago, it was submerged, Balbi said.
"This phase of search and rescue is critical," he said.
"This is why we are deploying all resources with high-tech sensors. We welcome the help we have received to find them."


When was it last heard from?

The submarine was heading from a base in southern Argentina's Tierra del Fuego archipelago to its home port in Mar del Plata, about 260 miles south of Buenos Aires.
It was scheduled to arrive there Sunday.

The San Juan was last spotted Wednesday in the San Jorge Gulf, a few hundred kilometers off the coast of southern Argentina's Patagonia region and nearly midway between the bases. 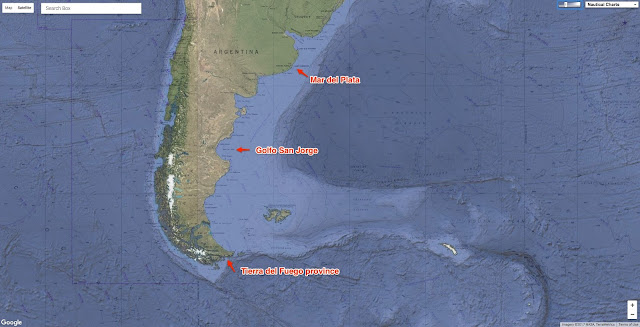 The submarine has a crew of 44.

On Friday, the navy said they were "conducting operations to resume communications with the ARA 'San Juan' submarine," according to a tweet.
On Saturday, seven communication attempts were recorded and were initially believed to originate from the ARA San Juan. But on Monday, officials said the radio calls did not come from the missing sub.
The frequency used for the calls was similar to that used by ARA San Juan's, said Balbi, the Navy spokesman, at a press conference in Buenos Aires.
"We do know they have an emergency satellite communication system," William Craig Reed, a former US Navy diver and submariner, told CNN.
"That is a buoy that will pop up to the top. They can send signals from this. They believe that might be the case. Although, unfortunately, it's not panned out. They have not been able to triangulate the signals. There's no way to confirm that they came from the submarine." 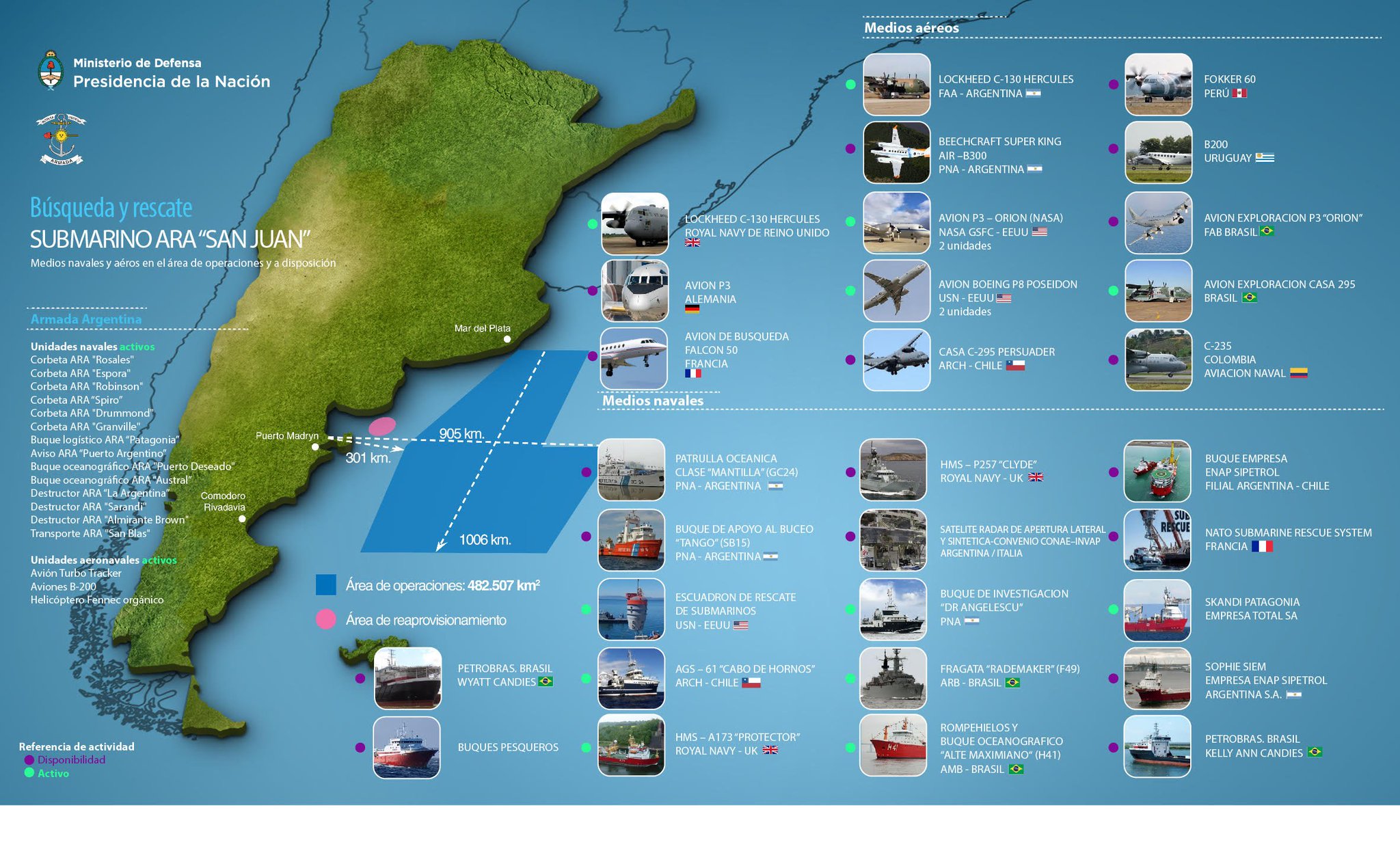 Any progress in the search?

Argentina's navy on Monday picked up what were thought to be noises from the missing submarine.
The sonar systems of two ships detected noises sounding like tools being banged against the hull of a submarine, according to a senior US Navy official familiar with the Navy's assistance in the search for the vessel.
The official said that crews of submarines in distress often bang on the vessel's hull to alert passing ships to their location.
The Argentinian navy was able to ascertain the rough location of the sounds and is now concentrating its search in a 35-square-nautical-mile area approximately 330 miles off the coast of Argentina, the official said.

A US Navy P-8A Poseidon aircraft, also known as a submarine hunter, is now assisting in the search area.
The official said that the waters of the Atlantic Ocean where the sounds originated are extremely deep and that search efforts thus far have yet to locate the submarine.
However, analysis of the file determined the noises were not from the missing vessel, Argentine navy spokesman Enrique Balbi said from Buenos Aires.
The noises were possibly from the ocean or marine life, Balbi said. 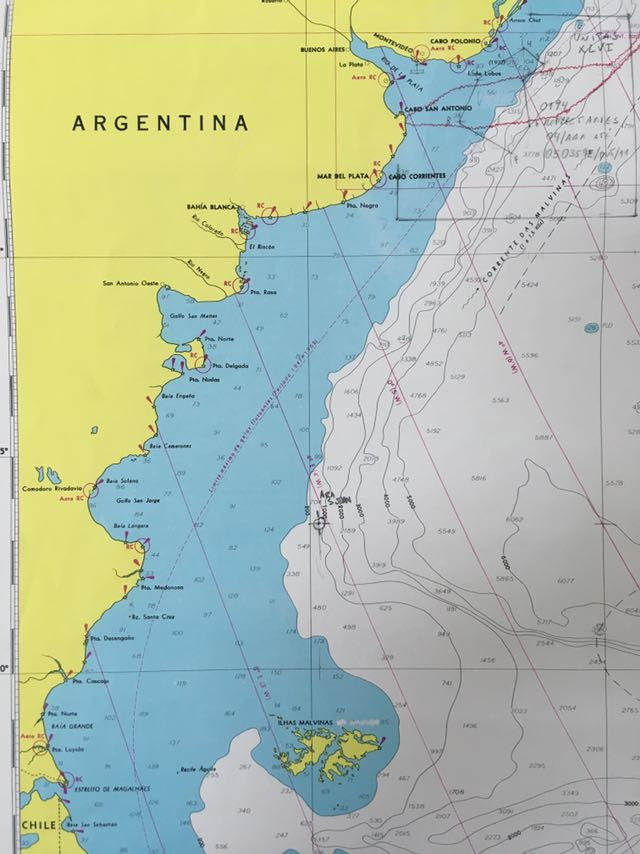 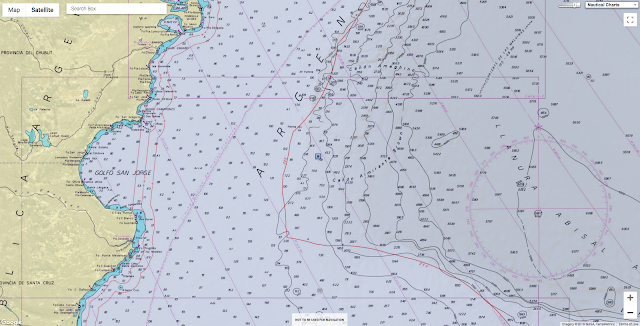 What could have happened?

The vessel could have suffered some sort of "catastrophic failure," Reed said.
But, he added, it also "could be something minor that has caused them to either be hung up somewhere or they are on the bottom."
The country's naval spokesman, Galeazzi, said Monday the captain of the San Juan reported a "failure" in the vessel's battery system shortly before it disappeared.
After the captain reported the sub had experienced a "short circuit," he was told to "change course and return to Mar del Plata," said Galeazzi, speaking from the naval base in Mar de Plata.
This type of damage is considered routine and the vessel's crew was reported safe, he added.
The navy had one more communication with the captain before the sub went missing, said Galeazzi, who did not mention the content of that final communication.
Because the San Juan is a diesel submarine, not a nuclear-powered one, "it has a limited life underwater," Reed said.
Time is ticking for the 44 submariners on board.
While submarines of this size and class can stay at sea for around a month, that doesn't mean they have 30 days underwater.
"It's dependent upon the last time they actually recharged their batteries, how long ago they refreshed the air, what's inside the submarine," Reed said.
"We just don't know."
If it had sunk but is still intact, the crew will have about a week to 10 days of oxygen, said Peter Layton, a visiting fellow at the Griffith Asia Institute at Griffith University, in Australia.

How often would the crew usually be in contact?

From a crew comfort point of view the sub would very likely travel submerged around 50 meters (165 feet) below the surface, Layton says, only coming near the surface to "snort" -- replenish its oxygen, recharge the batteries by using the diesel engines, and send radio signals -- around once every 24 hours.
However, that could depend on whether it was a straightforward transit or if the sub was engaging in other operations en route, Euan Graham, director, international security, of the Lowy Institute for International Policy in Sydney told CNN.
"Obviously the Falkland Islands are an intelligence target for Argentina," he said.
"There is no reason to suggest that it was engaged in this but still a possibility. If so it would need to stay out of detection envelope." 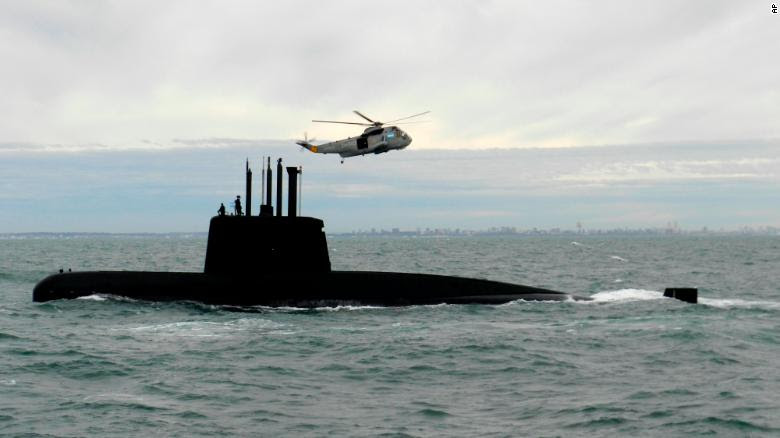 This 2013 photo provided by the Argentina Navy shows the ARA San Juan, a German-built diesel-electric vessel, near Buenos Aires, Argentina.
How hard is it to find a sunken sub?

They are usually found by listening passively to hear the engines, or by active sonar.
"If you're sitting at bottom of ocean, you're probably not making a lot of noise," Layton said.
"You can't recharge oxygen, can't run too much equipment."
Sonar is only really effective when you're looking for a sub "between the sea floor and the surface," he added.
"What you need is something that maps the sea floor," similar to the devices used in the MH370 search, he said.

What sort of shape is the sub in?

The San Juan is an old diesel submarine, built in Germany in the mid-1980s, but was refitted with new engines and batteries around five years ago, Graham said.
The hull dates back to 1985, but due to the recent refit "it shouldn't lose electric power catastrophically," he said.
"A total loss of power is highly unusual as redundancy is (factored in) to naval designs."
Because of the expansion and contraction of the hull as it ascends and descends deep below the ocean's surface, the sub is designed to have a shelf life of around 30 years.
That shelf life has expired, Layton said.
Assuming the hull is still intact, it can withstand ocean depths up to around 500-600 meters -- German-made subs set the crush depth at double their test depth, which is set at 300 meters, Layton says.
If it's resting on Argentina's continental shelf, it is likely in waters shallower than this, but if it's further into the Atlantic Ocean it likely sank below its "crush depth" -- the depth at which the hull buckles under pressure. 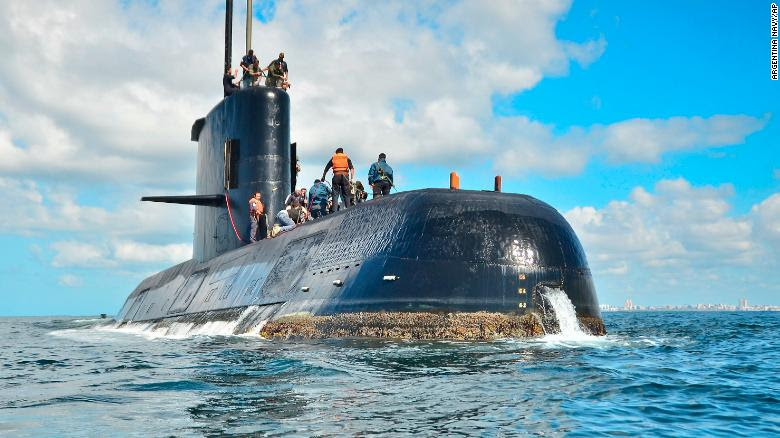 Is anything hampering search efforts?

Southern Argentina's Patagonia coast is notorious for strong storms.
"Currently a powerful low-pressure system is causing wind gusts in excess of 70 kph (around 45 mph) and churning up the South Atlantic Ocean with swells equivalent to a two-story building.
This weather will hamper the search efforts for at least the next 48 hours," CNN meteorologist Derek Van Dam said.
Given the submarines range, the search area could comprise "thousands of square kilometers," said Layton.
"If satellite signals are from sub this whittles things down, gives (search and rescue) a great chance."

Can't they send another submarine to find it?

"What is needed is what is in the area, above all, boats with multi-beam sonar, to be able to do the search properly," Argentine naval captain Hector Alonso said.
"Sending a submarine to the area to perform some type of search wouldn't add anything because they don't have the technology or the elements to be able to do an underwater search."
However, at least one specialist rescue sub will be required if the San Juan is found with the crew still alive.
The US is sending a rescue submersible to the area to help if needed.
Assuming the sub is found, how will crew members be rescued?
Even if the sub is located it could take several days to get a rescue vessel there, Graham said.
This is problematic when oxygen supplies are diminishing, especially when surface conditions are so rough.
"It's difficult to operate in 8-meter (26 feet) waves," he said.
Adding to the difficulties of a rescue, we currently "don't know what depth it is located, (and) how precarious the state of the hull could be."
The condition of the sub, assuming its resting on the continental shelf, is also of key concern.
"The sunk submarine needs to be sitting upright -- or nearly so -- on the sea floor so the rescue hatch(es) can be easily reached and docked with," Layton said.
"The sea floor, though, is not flat. If the submarine is lying at an acute angle, docking could be hard." Reed says that the US' Pressurized Rescue Module (PRM) rescue sub "can dock with a (disabled submarine) up to a 45˚ angle."