On Saturday, Hurricane Ophelia accomplished the unthinkable, attaining Category 3 strength farther east than any storm in recorded history.
Racing north into colder waters, the storm has since weakened to Category 1, but it is set to hammer Ireland and the northern United Kingdom with damaging winds and torrential rain on Monday as a former hurricane. 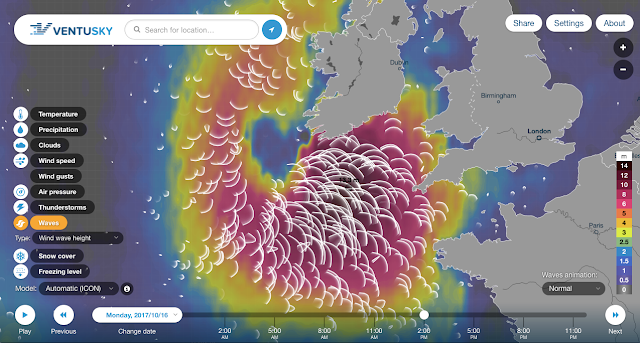 The storm, about 700 miles south-southwest of Ireland’s southern tip and packing 90 mph winds, is jetting to the northeast at 38 mph.
As it heads north, it is forecast to weaken further and morph into what’s known as a post-tropical storm by Sunday night.

It is passing over progressively colder water, which is stripping the storm of its tropical characteristics.
However, even as these cold waters cause the eye of the hurricane and its inner core to collapse, its field of damaging winds will expand and cover more territory — even if it doesn’t pack quite the same punch near its center. Maximum sustained winds of at least 70 mph are projected by the time Ophelia reaches Ireland, and the National Hurricane Center forecast shows almost the entirety of Ireland guaranteed to witness tropical-storm force winds of over 39 mph.
Hurricane force gusts of up to 80 mph are possible.

“This will be a significant weather event for Ireland with potentially high impacts — structural damage and flooding (particularly coastal) — and people are advised to take extreme care,” the Irish Meteorological Service said.
It issued a “red warning,” its highest-level storm alert for the southern and coastal areas. The UK Met Office issued an “amber wind warning” for northern Ireland, the second-highest alert, where it is predicting wind gusts up to 70-80 mph, and released the following statement:

A spell of very windy weather is expected on Monday in association with ex-Ophelia. Longer journey times and cancellations are likely, as road, rail, air and ferry services may be affected as well as some bridge closures.
There is a good chance that power cuts may occur, with the potential to affect other services, such as mobile phone coverage.
Flying debris is likely, such as tiles blown from roofs, as well as large waves around coastal districts with beach material being thrown onto coastal roads, sea fronts and properties.
This leads to the potential for injuries and danger to life.

Parts of southern and central Scotland and northern England also may face a hazardous combination of tropical storm-force winds and heavy rain.
Because the storm is moving so fast, its powerful blow will be brief, the worst lasting six to 12 hours in most locations.
It will leave the British Isles by Tuesday morning.

On Sunday, ahead of the storm, strong southerly winds were drawing abnormally warm conditions into the British Isles, with high temperatures up to 77 degrees (25 Celsius) forecast.
The Daily Mail reported that “swarms of deadly jellyfish” (actually, Portuguese man o’ war) had washed ashore on southern beaches. When Ophelia became a major — Category 3 (or higher) — hurricane Saturday, it marked the sixth such storm to form in the Atlantic this year, tied with 1933, 1961, 1964 and 2004 for the most through Oct. 14, according to Phil Klotzbach, tropical weather researcher at Colorado State University.

The storm is most remarkable, however, for where it reached such strength — becoming the first storm to reach Category 3 strength so far east. 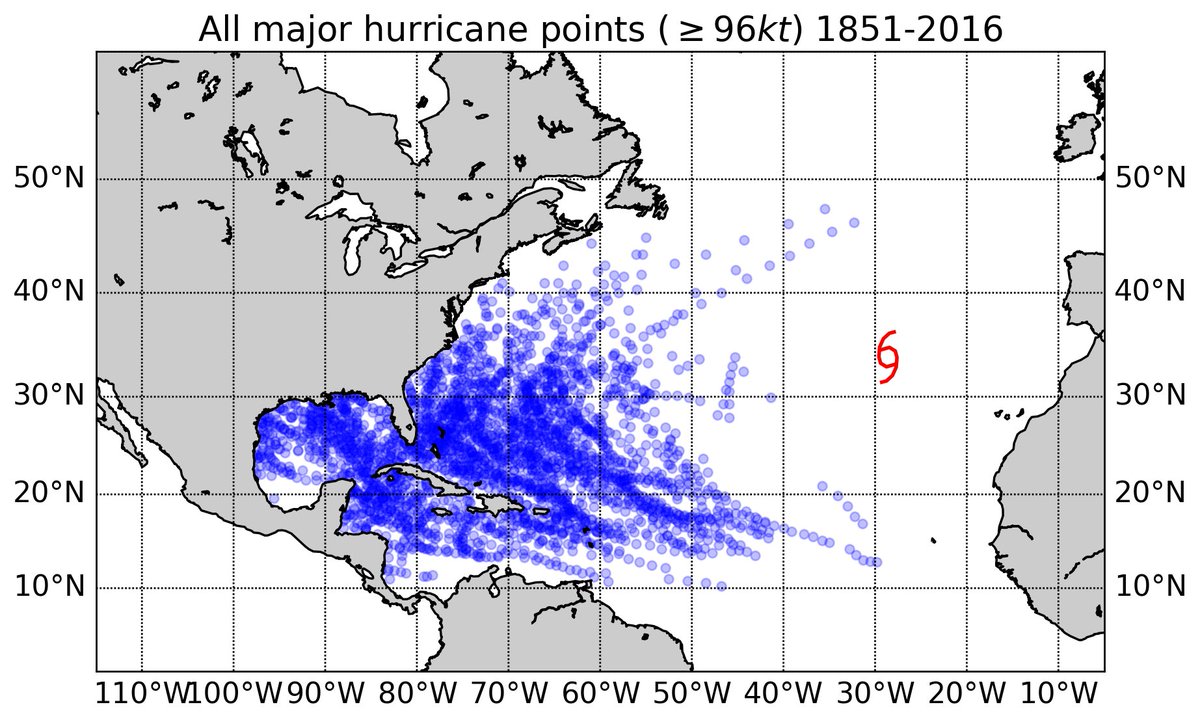 This figure really says it all. #Ophelia is a huge outlier from the typical envelope of major hurricane tracks in the Atlantic

Much-above-normal water temperatures and light upper-level winds helped the storm reach such unusual intensity so far north and east in the Atlantic Ocean. While having a major hurricane so far east in the Atlantic Ocean is rare, it is not particularly unusual for former tropical weather systems to slam into Ireland and the United Kingdom.
As we wrote Friday, this happens about once every several years, on average, conservatively.

Posted by geogarage at 7:13 AM