The Japanese mini submarine HA-19 (similar to the mini sub sunk by the USS Ward),
which washed ashore on December 8, 1941
Photo courtesy of Naval History and Heritage Command

On December 7, 2016, 75 years after the attack on Pearl Harbor, join us for a live dive on two Japanese mini submarines, the first of which was sunk by the USS Ward prior to the attack.
This will be the first time the public will be able to view live underwater exploration of the submarines in real time.

A team of maritime archaeologists and scientists from NOAA's Office of National Marine Sanctuaries and Office of Ocean Exploration and Research will live-stream the dive. 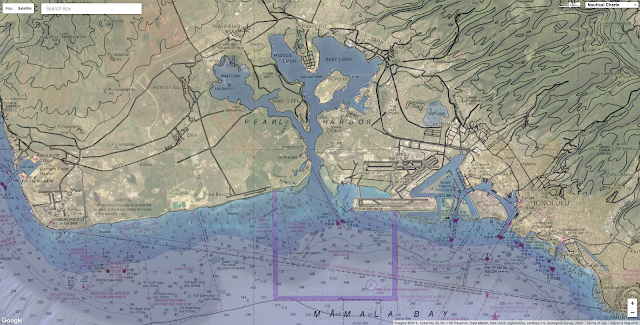 A remotely operated vehicle deployed off of the NOAA Ship Okeanos Explorer will send back images of the wreck site.
James Delgado, director of maritime heritage, NOAA Office of National Marine Sanctuaries and Frank Cantelas, marine archaeologist, NOAA Office of Ocean Exploration and Research will be on board, describing the exploration.
"Until now, only a handful of explorers and scientists have seen these relics of the war in the deep sea," notes James Delgado, "but thanks to technology, anyone and everyone can now dive with us in the first live exploration of the 'midget' submarines that represent the beginning of the war in the Pacific."
The research team will be using a remotely operated vehicle from NOAA Ship Okeanos Explorer to revisit the historic wreck site and document its condition.
The dive will be live-streamed and the public is invited to participate.

The conning tower of the mini submarine sunk by the USS Ward.
Photo: University of Hawaiʻi/HURL
On the morning of December 7, 1941, U.S. naval vessels and aircraft on patrol outside Pearl Harbor spotted a partially submerged submarine trying to enter the harbor, but alerts were not immediately sent.
Ninety minutes before Pearl Harbor was bombed by air, the destroyer USS Ward fired on the mini submarine, sinking the sub.
The event marks the first U.S. shots fired and the country's entry into World War II in the Pacific.
The NOAA team will dive on the wreck of this submarine.
The second submarine to be explored during the dive disappeared on the morning of December 7, 1941.
It was discovered in shallow waters in 1951, raised by the U.S. Navy, and taken out to sea to be dumped in deeper water.
In 1992, the University of Hawaiʻi's Undersea Research Laboratory rediscovered it.
It has been periodically visited by the university's submersibles, the last time in 2013.
Posted by geogarage at 1:48 AM