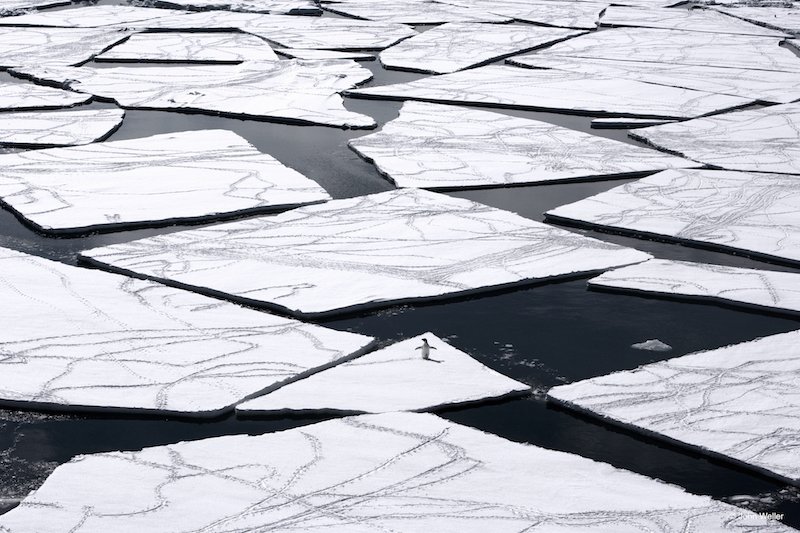 A landmark international agreement to create the world’s largest marine park in the Southern Ocean has been brokered in Australia, after five years of compromises and failed negotiations.
More than 1.5m sq km of the Ross Sea around Antarctica will be protected under the deal brokered between 24 countries and the European Union. It means 1.1m sq km of it – an area about the size of France and Spain combined – will be set aside as a no-take “general protection zone”, where no fishing will be allowed.
Significantly, the protections are set to expire in 35 years.
The agreement came on Friday at the conclusion of two weeks of discussions between delegates from 24 countries and the EU in Hobart, at the annual meeting of the Commission for the Conservation of Antarctic Marine Living Resources (CCAMLR).


The Commission for the Conservation of Antarctic Marine Living Resources (CCAMLR) was established by international convention in 1982 with the objective of conserving Antarctic marine life.
This was in response to increasing commercial interest in Antarctic krill resources, a keystone component of the Antarctic ecosystem.
Being responsible for the conservation of Antarctic marine ecosystems, CCAMLR practises an ecosystem-based management approach.
This does not exclude harvesting as long as such harvesting is carried out in a sustainable manner and takes account of the effects of fishing on other components of the ecosystem.
CCAMLR's contribution to global food security is through its programs of research, monitoring and introduction of conservation measures.
CCAMLR is an international commission with 25 Members, and a further 11 countries have acceded to the Convention.
Based on the best available scientific information, the Commission agrees a set of conservation measures that determine the use of marine living resources in the Antarctic.

Evan Bloom from the US state department, the head of the US delegation to the meeting, told the Guardian he was “thrilled”.
“I think it’s a really significant moment,” he said.
“We’ve been working towards this for many years.
It’s taken time to get consensus but now we have established the world’s largest marine protected area.”
It is the first marine park created in international waters and will set a precedent for further moves to help the world achieve the International Union for the Conservation of Nature’s recommendation that 30% of the world’s oceans be protected.
The Antarctic protections had been urgently sought because of the importance of the Southern Ocean to the world’s natural resources.
For example, scientists have estimated that the Southern Ocean produces about three-quarters of the nutrients that sustain life in the rest of the world’s oceans.
The region is also home to most of the world’s penguins and whales.
The Ross Sea is a deep bay in the Southern Ocean that many scientists consider to be the last intact marine ecosystem on Earth – a living laboratory ideally suited for investigating life in the Antarctic and how climate change is affecting the planet.
Andrea Kavanagh, the director of Antarctic and Southern Ocean work for the Pew Charitable Trusts, which has been working for years to achieve today’s result, said: “Today, CCAMLR made history by declaring the planet’s largest marine protected area in the Ross Sea.
“This landmark decision represents the first time that nations have agreed to protect a huge area of the ocean that lies beyond the jurisdiction of any individual country and shows that CCAMLR takes its role as protector of Antarctic waters seriously.”


Next : conserving the unspoiled Weddell Sea in the Antarctic
The Weddell Sea is one of the last pristine areas in the Antarctic, not least because the international fishing fleet has spared this region so far.
The European Union submitted a proposal to the Commission for the Conservation of Antarctic Marine Living Resources (CCAMLR) for a marine protected area (MPA) in the Weddell Sea.
The scientific background was compiled by experts of the Alfred Wegener Institute, on behalf of the German Federal Ministry of Food and Agriculture.
This video shows why it is worthwhile to protect this unique marine region.

The protections will not decrease the total amount of fish that are allowed to be caught in the Ross Sea, but it will move the industry away from the most crucial habitats close to the continent itself.
Russia has an industry catching antarctic toothfish there and the changes will push the fleet into waters where they will catch fewer immature fish, and where they won’t compete with as many orcas, who also rely on toothfish for food.
The agreement also establishes a large 322,000 sq km “krill research zone” that will allow for reseach catching of krill, but prohibit toothfish catching.
Additionally, a 110,000 sq km “special research zone” will be established on the outside of the no-take zone, allowing catching of krill and toothfish only for research purposes.
“Today’s agreement is a turning point for the protection of Antarctica and the Southern Ocean,” said Chris Johnson, WWF-Australia’s ocean science manager.
“This is important not just for the incredible diversity of life that it will protect, but also for the contribution it makes to building the resilience of the world’s ocean in the face of climate change.”
But the expiry of the protections in 35 years was a significant compromise.
It came after five years of failed negotiations, with opposition from China and Russia which have fishing industries in the region.
The World Conservation Union definition of a marine protected area requires it to be permanent.
“WWF has concerns that the Ross Sea agreement does not meet this standard,” Johnson said.
“We are optimistic that after years of deadlock at the annual CCAMLR meeting, today’s decision will spark renewed momentum for CCAMLR members to achieve permanent protection for the Ross Sea in coming years and also deliver marine protected areas in East Antarctica and the Weddell Sea.”


See penguins, seals, whales, and more unique animals in this series of photos by Pew marine fellow and acclaimed photographer John B. Weller.
These stunning scenes of life in Antarctica underscore what’s at stake if the world doesn’t act now to protect the Ross Sea, Weddell Sea, and East Antarctic waters.

The Guardian understands that a proposal for 50 years of protection had been tabled but Russia wouldn’t agree.
Bloom said while the US and other countries preferred permanent protections, the compromise “was necessary in order for this to be adopted”.
Kavanagh said: “It can’t be overstated how difficult these negotiations were.”
“It took five years of talking about this one proposal exclusively to get it across the table.
And if you look at other marine reserves that are permanent, they’re in one exclusive economic zone – it’s only one country that has to make the decision.
“And I’m positive that in 35 years, the conservation values that come out of the Ross Sea, the protections will be renewed.
The world will be a different place in 35 years.”
The campaign group Avaaz had, with Leonardo DiCaprio, launched a petition calling for CCAMLR to establish “the world’s largest network of marine protected areas in the Southern Ocean, starting with the Ross Sea and East Antarctica”.
It received more than 2m signatures, Avaaz said.
“There’s massive momentum in the world right now to protect our oceans,” said Luis Morago, campaign director at Avaaz.
“Governments have just set the landmark target of protecting 30% of our oceans, and millions of people all over the world are pushing for more protected areas to achieve that goal.
The Ross Sea is just the start.”