How fisheries can be the next great environmental success story 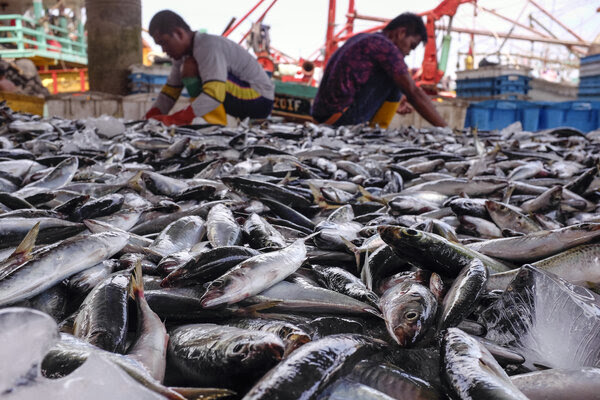 Fishermen separate a variety of fish for trading at the Kota Kinabalu fish market in Sabah, Malaysia, Saturday, March 26, 2016. Kota Kinabalu, formerly known as Jesselton, is the capital city of Sabah, a well known fishing and tourism destination on the East Malaysia.
Joshua Paul/AP
From CSMonitor

A study published Monday by a team of scientists and economists suggests that fishermen can catch more fish and make more money, all while restoring underwater populations worldwide.

Restoring the world’s fisheries is really a no-brainer, says a new study published Monday in the journal Proceedings of the National Academy of Sciences (PNAS).
A team of scientists from the University of California - Santa Barbara, the Environmental Defense Fund, and the University of Washington compiled a database of over 4,500 fisheries around the world, and after using various bioeconomic models, the authors found that health and productivity are not mutually exclusive when it comes to the world’s fisheries.
“It is not a tradeoff between the needs of fishermen and the needs of fish,” Douglas Rader, chief oceans scientist at the Environmental Defense Fund and one of the lead authors of the study, tells The Christian Science Monitor in a phone interview Monday.
“To have our fish and eat them too – it’s remarkable.”

“Applying sound management reforms to global fisheries in our dataset could generate annual increases exceeding 16 million metric tons (MMT) in catch, $53 billion in profit, and 619 MMT in biomass relative to business as usual,” the authors explain in their study.
“We also find that, with appropriate reforms, recovery can happen quickly, with the median fishery taking under 10 [years] to reach recovery targets. Our results show that commonsense reforms to fishery management would dramatically improve overall fish abundance while increasing food security and profits.”

So what are these commonplace, if not magical, reforms?
Rights-based fishery management (RBFM) optimizes economic value.
In this approach, fishing quotas are set to ensure healthy population levels, and then in turn product prices increase (because of higher quality and demand) and fishing costs decrease (because of a reduced race to fish).
And RBFM is realized through approaches like cooperatives, territorial rights, and individual transferable quotas.
All of these approaches give fishermen secure fishing rights.
Under most current management systems, fisherman practice a ‘race to fish’ competing with one another to catch as many fish as possible, taking fish at a faster rate than they can reproduce.
Some governments have instituted individual quotas, but this creates a tense relationship between fisherman and regulators, and the men and women on the water lack a financial incentive to preserve the overall ecosystem.
“In contrast, in a catch share system (also called a fishing rights system), each fisherman is entitled to a percentage of the total allocated haul,” explains National Geographic’s Brian Clark Howard after his conversation with study author Amanda Leland.
“If the number of fish in the ocean rises, the number that can be caught can quickly be revised. That gives all fishermen an incentive to use best practices and police their own waters, says Leland, so everyone’s piece of the pie gets bigger.” And this isn’t exactly a new concept, says Rader.
We’ve known the fates of fisheries and fisherman are interconnected, but this study proves that both financial and reproductive success, respectively, are possible.
“It’s been suggested theoretically, but we’ve proven it can be done practically using science,” Rader tells The Monitor.
“Using science as a tool in environmental advocacy when we have a real chance to recover and protect one of the basic life support systems of the planet – that’s incredibly exciting to me.”

But there are definitely obstacles to achieving this solution.
“We need to translate this science into management systems that will work. And there will be short-term costs to achieve this reform. That needs to be dealt with: financing this,” says Rader.
As fishermen pull back to implement the catch share reforms, food prices could rise and fishermen’s profits could fall.
“But we have to recognize that this transition will require new programming of resources, and then within 10 years, you will get your money back.”
Under a fishing rights system, the authors found that simultaneous gains for catch, profit, and biomass are a likely outcome for the majority of stocks and countries: 56 percent of stocks will grow and fishermen in 23 of the top 30 fish-harvesting will see increased profits.
And if the reform efforts are put in place now, the median recovery time would be 10 years and by 2050, “the vast majority (98%) of stocks could be biologically healthy and in a strong position to supply the food and livelihoods on which the world will increasingly rely."

And looking forward, worldwide fisheries seem like a smart investment.
“The upcoming population of the planet will have more people in both 2050 and 2100. We will have much greater food needs than anyone predicted,” Rader tells The Monitor.
“Getting wild fish right will make an essential contribution to closing the world food gap, it is a major down payment in closing the food gap. In fact, it is actually a low-hanging fruit for the problem.”