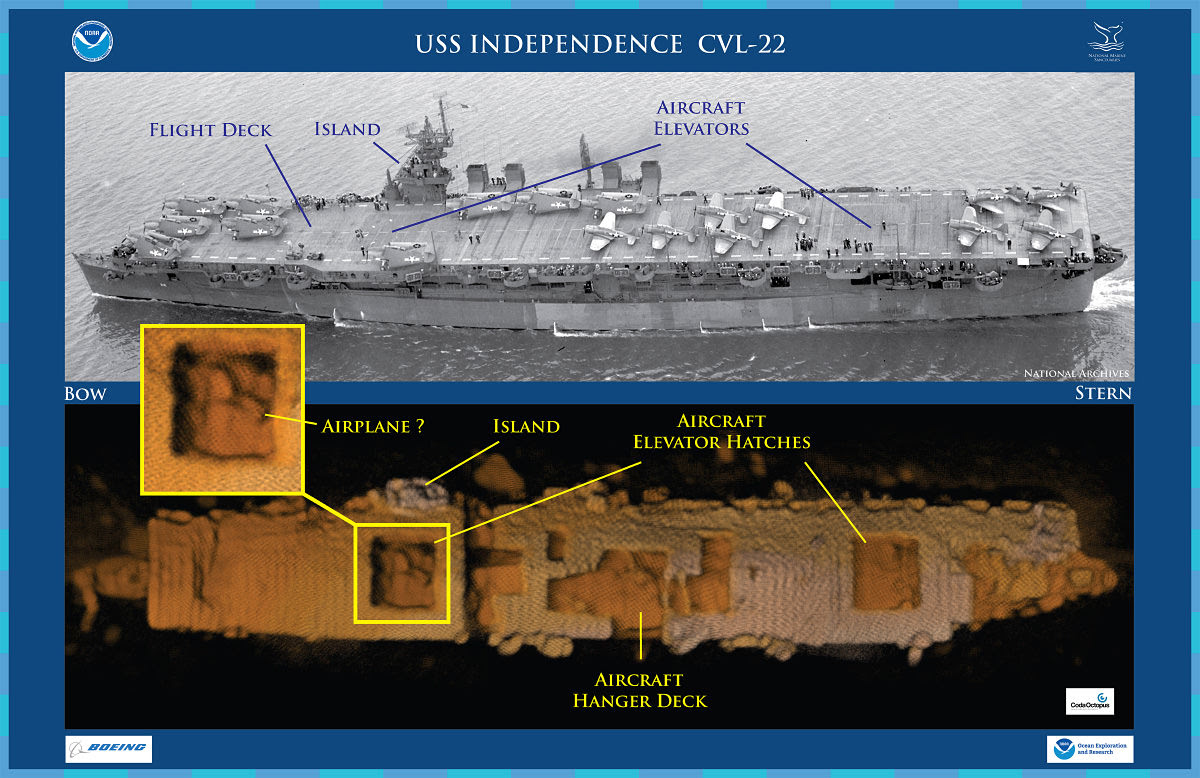 NOAA, working with private industry partners and the U.S. Navy, has confirmed the location and condition of the USS Independence, the lead ship of its class of light aircraft carriers that were critical during the American naval offensive in the Pacific during World War II.
Resting in 2,600 feet of water off California's Farallon Islands, the carrier is "amazingly intact," said NOAA scientists, with its hull and flight deck clearly visible, and what appears to be a plane in the carrier's hangar bay. 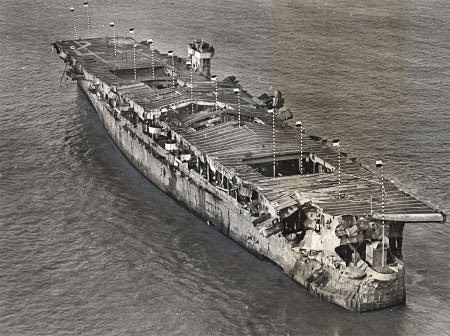 Independence (CVL 22) operated in the central and western Pacific from November 1943 through August 1945 and later was one of more than 90 vessels assembled as a target fleet for the Bikini Atoll atomic bomb tests in 1946.
Damaged by shock waves, heat and radiation, Independence survived the Bikini Atoll tests and, like dozens of other Operation Crossroads ships, returned to the United States.
While moored at San Francisco's Hunters Point Naval Shipyard, Independence was the primary focus of the Navy's studies on decontamination until age and the possibility of its sinking led the Navy to tow the blast-damaged carrier to sea for scuttling on Jan. 26, 1951.
"After 64 years on the seafloor, Independence sits on the bottom as if ready to launch its planes," said James Delgado, chief scientist on the Independence mission and maritime heritage director for NOAA's Office of National Marine Sanctuaries.
"This ship fought a long, hard war in the Pacific and after the war was subjected to two atomic blasts that ripped through the ship. It is a reminder of the industrial might and skill of the "greatest generation' that sent not only this ship, but their loved ones to war."

NOAA's interest in Independence is part of a mandated and ongoing two-year mission to locate, map and study historic shipwrecks in Gulf of the Farallones National Marine Sanctuary and nearby waters. The carrier is one of an estimated 300 wrecks in the waters off San Francisco, and the deepest known shipwreck in the sanctuary.


Boeing has developed an autonomous, unmanned, underwater vehicle -- Echo Ranger -- that can dive 10,000 feet below the ocean's surface to perform a variety of long-endurance, deep-dive missions.
Echo Ranger recently recorded its first autonomous surface exit as it dove 40 feet below the surface of the Pacific on a pre-programmed course.
It later maneuvered to a depth of 400 feet -- all the while sending telemetry to Boeing Marine Systems engineers on tracking boats on the surface above.
Echo Ranger is 18.5 feet long, weighs more than five tons and is capable of traveling up to eight knots and as far as 80 miles without resurfacing.

The mission was conducted last month using an 18.5-foot-long autonomous underwater vehicle (AUV), Echo Ranger, provided by The Boeing Company through a cooperative research and development agreement with NOAA's Office of Oceanic and Atmospheric Research.
Boeing also partnered with technology company Coda Octopus to integrate its 3D-imaging sonar system, Echoscope, into the AUV.
"Boeing is excited for the opportunity to partner with NOAA to utilize this state of the art technology," said Fred Sheldon, Boeing project manager for AUVs.
"The Echo Ranger is uniquely suited for this type of mission and performed perfectly allowing us to conduct a thorough survey of the USS Independence."

Scientists and technicians on the sanctuary vessel R/V Fulmar followed the AUV as it glided 150 feet above the wreck and successfully surveyed the carrier's nearly intact hull.
The survey determined that Independence is upright, slightly listing to starboard, with much of its flight deck intact, and with gaping holes leading to the hangar decks that once housed the carrier's aircraft. 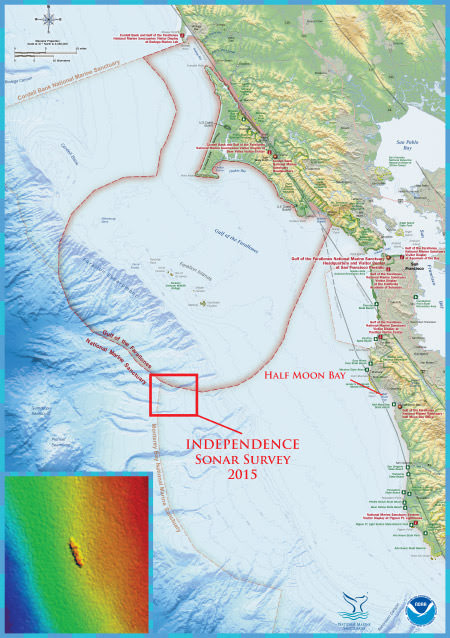 The shipwreck site of the former aircraft carrier, Independence, is located in the northern region of Monterey Bay National Marine Sanctuary.
Half Moon Bay, California was the port of operations for the Independence survey mission.
The first multibeam sonar survey of the Independence site was conducted by the NOAA ship Okeanos Explorer in 2009.

"By using technology to create three-dimensional maps of the seafloor and wrecks like Independence, we can not only explore, but share what we've learned with the public and other scientists," said Frank Cantelas, archaeologist with NOAA's Office of Ocean Exploration and Research, who joined the mission along with Robert Schwemmer, west coast regional maritime heritage coordinator for NOAA's Office of National Marine Sanctuaries.

Delgado, primary author of a 1990 scientific report on the history and archaeology of the ships sunk at Bikini Atoll in the Marshall Islands, said currently there are no plans to enter the vessel or survey drums of hazardous and radioactive waste that were dumped in the sanctuary between 1946 and 1970. No trace of the drums or radiation was observed during the mission, Delgado said.

Gulf of the Farallones National Marine Sanctuary encompasses nearly 3,300 square miles of ocean and coastal waters beyond California's Golden Gate Bridge.
The sanctuary supports an abundance of species including the largest breeding seabird rookery in the contiguous United States, and other species such as whales and white sharks.