The imperially sponsored maritime expeditions led by Zheng He in the early fifteenth century AD projected Ming Chinese power as far as Java, Sri Lanka and the East African coast.
The Indian Ocean voyages are well documented in Chinese and Islamic historical accounts and by the nautical charts of Zheng He's journeys.
Less clear has been the exact location of ancient Hormuz, the destination of Zheng He's voyages in the Persian Gulf.
Recent re-analysis of ceramics from coastal southern Iran provides a solution.
Archaeological evidence for Ming ceramics on present-day Hormuz Island and jewellery and gemstones of Iranian origin in southern China suggest that ancient Hormuz and Hormuz Island are one and the same.

From AncientOrigins by Liz Leafloor

The 15th century voyages of Chinese maritime admiral and diplomat Zheng He have been well documented by historical accounts.
Zheng He, highly influential in Ming emperor Yongle’s court, was instrumental in widening Chinese trade and influence through voyages to Southeast Asia, India, Arabia, Persia and East Africa.
However, one of Zheng He’s destinations has largely remained a mystery to researchers, until now. 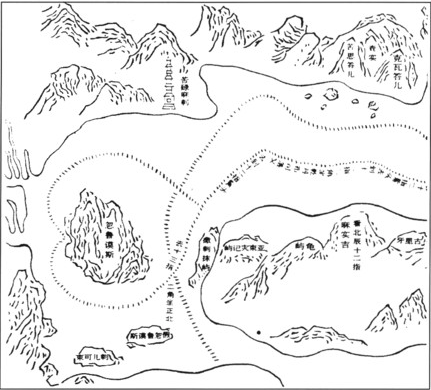 ‘Zheng He’s voyages to Hormuz: the archaeological evidence’, a recent article published in the archaeological journal Antiquity, notes that historical accounts and nautical maps mention Muslim-born Zheng He visited an ancient island in the Persian Gulf — but which island it was specifically has been under scholarly debate.
Some say it was Hormuz Island and others cite the larger Qeshm Island.

Explorer: Chinese Admiral Zheng He is known to have sailed the to Europe and Africa with a massive fleet of ships.

By examining artifacts found in the region, researchers now conclude that Zheng He visited and traded with the kingdom of Hormuz, and Hormuz Island specifically, which played a key role in an economic boom in the Gulf in the 15th century.
Study authors Lin Meicun of the School of Archaeology and Museology, Peking University in China, and Ran Zhang of the Department of Archaeology, Durham University, UK, explain:
“Less clear has been the exact location of ancient Hormuz, the destination of Zheng He’s voyages in the Persian Gulf. Recent re-analysis of ceramics from coastal southern Iran provides a solution. Archaeological evidence for Ming ceramics on present-day Hormuz Island and jewellery and gemstones of Iranian origin in southern China suggest that ancient Hormuz and Hormuz Island are one and the same.”

Kangnido map (1402) created in  Korea depicts the general form of the Old World
from Africa and Europe in the west to Japan in the east.

Although, overall, it is less geographically accurate than its Chinese cousin, most obviously in the depiction of rivers and small islands, it does feature some improvements (particularly the depictions of Korea and Japan, and a less cramped version of Africa).

Hormuz Island, off modern-day Iran in the Persian Gulf, was an important regional port, and considered a center of world trade was visited several times by Zheng He’s fleet.

In ‘Zheng He’s voyages to Hormuz’ Meicun and Zhang establish that the kingdom of Hormuz and Ming China were tied by trade routes.
The two cultures were revealed and enhanced through trade and communication, and flourished during the Ming Dynasty.
This era saw a significant period of growth.
It is historically recorded that China brought rich products, silks and fabrics, and in exchange received luxuries of pearls, gold, silver, gemstones and ceramics.
The kingdom of Hormuz also gifted wild animals, such as lions, war horses, leopards and giraffes (the giraffes were believed to have magical qualities in China as they were thought to resemble the mythical Qilin).

The pet giraffe of the Sultan of Bengal, brought from Medieval Somalia,
and later taken to China in the twelfth year of Yongle (1415).

According to the study, archaeological surveys and excavations across approximately 900 sites revealed Chinese ceramic materials, “Approximately 300 shards of Chinese ceramics, including Qingbai stoneware, blue and white porcelain, and Longquan celadon, that have been dated to between the fourteenth and sixteenth centuries were found on Hormuz Island.”
Analysis of the artifacts revealed a direct connection between the finds and Zheng He’s voyages.

The controversial Chinese map argued by some to be from 1418.
Mr Menzies believes that this portion of the map depicts the Chinese mapping of North and South America in 1418 - showing major rivers.

One researcher controversially theorizes that Zheng He went farther than official history records, and may have discovered the New World 70 years before Italian explorer Christopher Columbus.
In his book, titled ‘Who Discovered America: The Untold History of the Peopling of the Americas’, amateur historian Gavin Menzies claims a Chinese map dated 1418 supports his contention that the Chinese were exploring the Americas in 1421.
The map charted by Admiral Zheng He appears to show North American rivers and coasts as well as the continent of South America in some detail.
Menzies also writes that DNA markers proves some Native Americans are the descendants of several waves of Asian settlers.