Hunters of the South Seas: lessons from filming the Bajau Laut sea nomads

Hunters of the South Seas Season 1 Epidode 1 "The Bajau"

From The Guardian by Will Millard

Will Millard spent a month living in Indonesia while filming a documentary for BBC2, where spear fishing, hunting for sperm whales and sleeping in a stilt village is still part of daily life

I have never visited a community with a closer relationship to the sea than the Bajau Laut sea nomads of Indonesia.
Their entire lives are focused on Ibu Laut – Mother Ocean.
They are amazingly adapted physically for harvesting the sea and they live in the heart of the Coral Triangle, the richest marine environment on Earth.
The guys I stayed with were incredibly efficient at catching fish, holding their breath for minutes at a time to hunt.
In the film I describe their movement as underwater ballet – but it’s so practical.
They seem to intuitively know how the fish will move before they spear them. 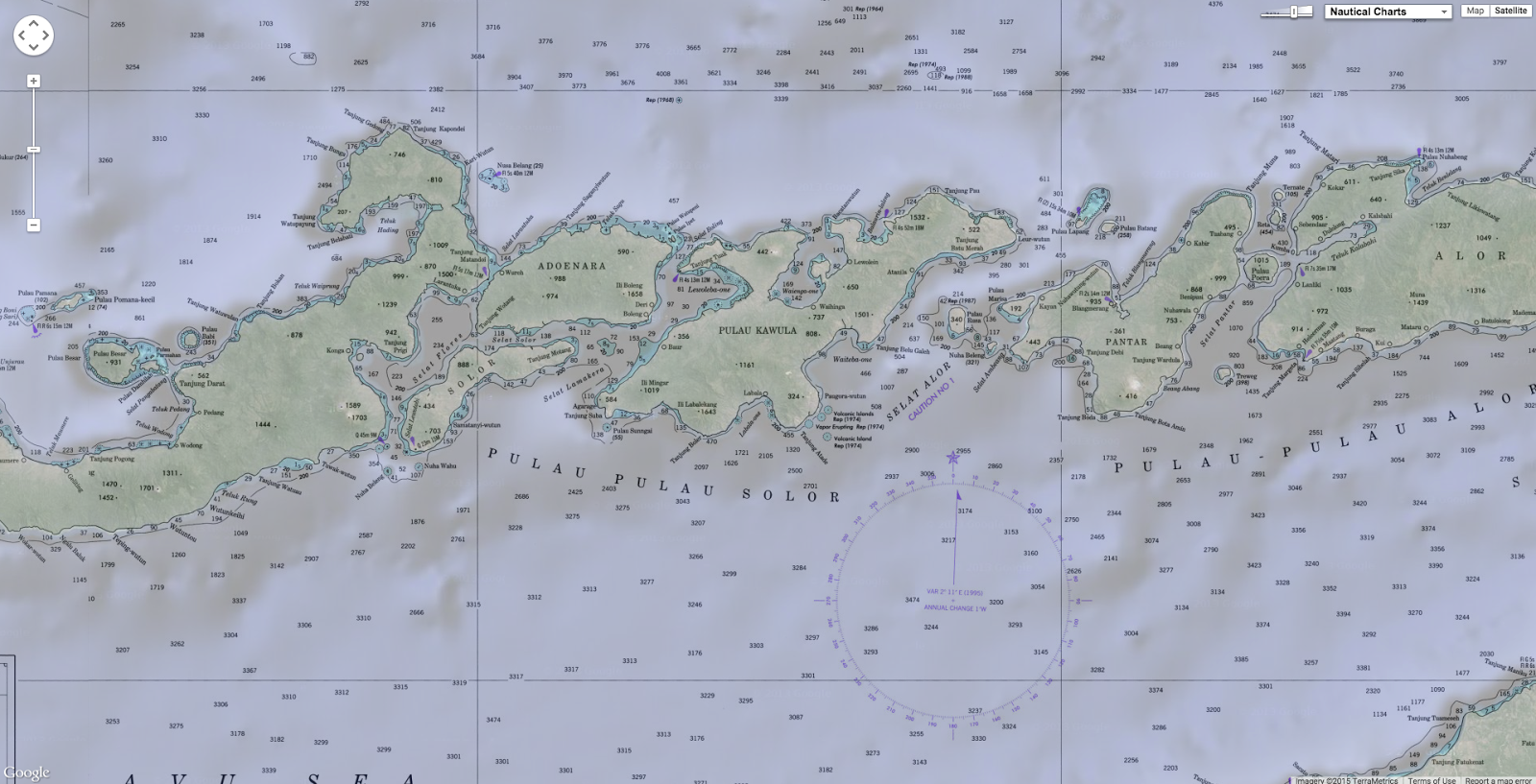 On the South coast of Lembata, the village of Lamalera is known for its whale hunting
Marine GeoGarage (NGA chart)

I spent a month living with a family in a stilt village out at sea for the BBC’s Hunters of the South Seas.
I got very close to Lobu, the eldest son.
He is a very charismatic child, with a physical disability – maybe muscular dystrophy.
The community’s reaction to Lobu deconstructed the romanticism of living with the Bajau.
They define themselves by their ability to fish – Lobu couldn’t fish or even swim, so they believed he was cursed and shunned him.
That was heartbreaking.
The irony is that overfishing may soon force the Bajau to seek alternative livelihoods. 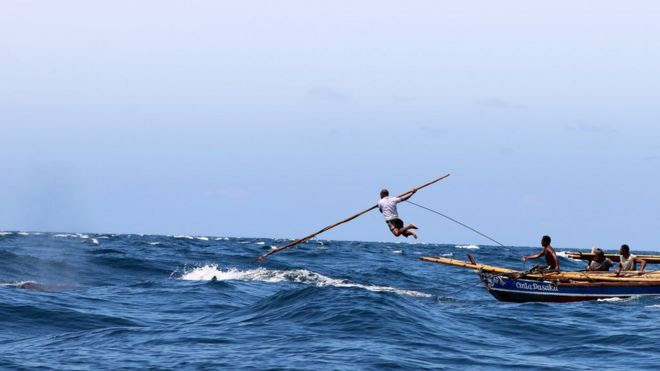 Commercial whaling was banned in 1986, but a remote Indonesian village is one of the few places still hunting whales using traditional methods.

The people of Lamalera island in eastern Indonesia are the only traditional whaling community left in the tropics.
They live on an infertile patch of volcano, but they just happen to have this incredible two-mile-deep oceanic trench right on their doorstep – it’s like a superhighway for sperm whales, dolphins, manta rays and sharks.
They hunt sperm whales to survive and the numbers they take doesn’t make a dent on global populations – but it was still hard for me to witness.
You never know when a whale is going to come; months can pass without a sighting.
We got lucky, if you could call it that.
We almost missed it: I just had time to grab a handicam and jump on the last boat heading out.
It was mayhem – a whale capsized one canoe and people scrambled on top of it.

Suddenly I realised the danger I was in.
Twice I saw an enormous whale tail rising in the air above me – the Hand of God, they call it.
The hunters had harpooned one whale and another came up to help.
Our captain tried to harpoon it – and missed.
Twelve metres and 25 tonnes of whale and he missed it!
Then a guy from another boat tore off his shirt, leapt off the bow and pierced its back.
After that the sea turned to blood as they stabbed it repeatedly.
It was terrifying, adrenaline-fuelled and, to me, tragic.
But there was still the sense of a deep respect for the animals.
It was all quite difficult to reconcile. 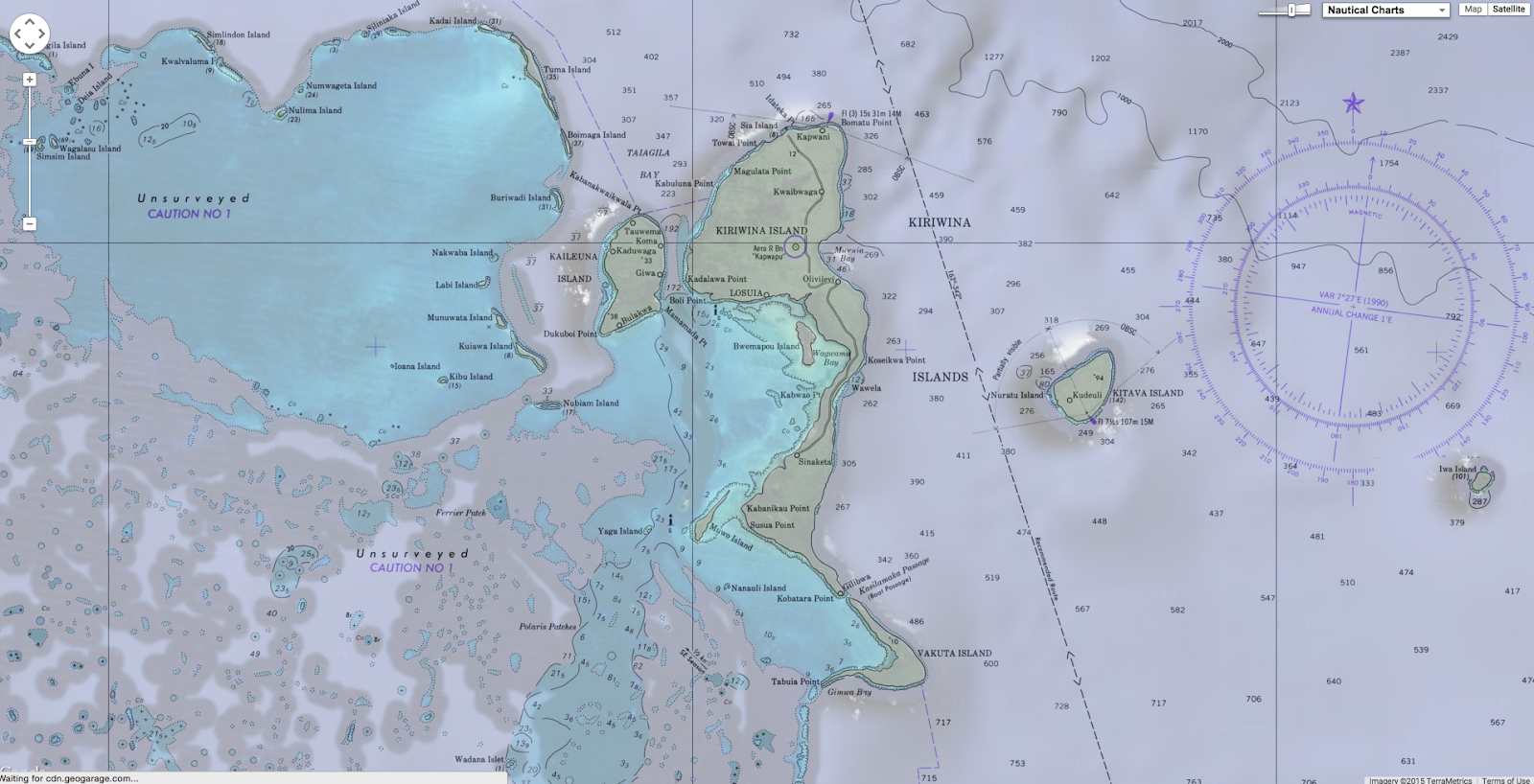 Trobiand islands with the Marine GeoGarage

The Trobriand islands were much gentler.
I had heard of a group of islands off the coast of Papua New Guinea that maintain ties through “kula”, an intricate system of exchange involving shell necklaces and armbands that circulate across islands.
It is a currency, a social glue and a tool of political intrigue among the elite.
The Trobrianders have had a reputation for free love since anthropologist Bronisław Malinowski published The Sexual Life of Savages in 1929.
But it wasn’t what you might imagine.
I did keep seeing condom wrappers everywhere, but it turned out they were being used as fishing lures!
I was warned (despite insisting I had a girlfriend) that although a woman could spend the night, she must not be on my veranda by morning or we would be de facto married.
I don’t think there was much chance of that happening, though – we were referred to as “dim-dims” – pidgin for foreigner – and considered pitifully ugly.
I was amazed at the resilience of these communities in the face of great change, sticking to their traditions as the environment that supports them is degraded.
Part of me worried that we were making the last record of their lives – but then they have managed to endure this long, so who knows what may happen in the future?