From NOAA by Katie Teshima

The morning of February 22, 1901, was much like any other on San Francisco Bay.

A thick blanket of fog spread across the water as the steamer City of Rio de Janeiro approached the Golden Gate, laden with passengers and freight from Hong Kong, Yokohama and Honolulu. Returning to San Francisco after more than two months at sea, the City of Rio’s cabins brimmed with the hopes and dreams of Chinese and Japanese immigrants seeking a new life in the United States. Up on deck, Captain William Ward and Pilot Frederick Jordan steered what they thought to be a safe course into the narrow mouth of the Bay, but could make out no landmarks through the damp gray void. 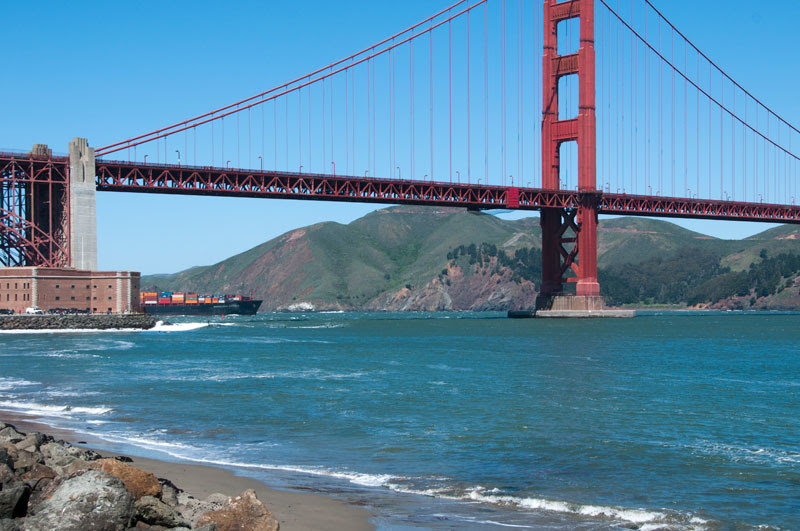 Present day photo at the entrance of the Golden Gate looking westward with Fort Point at the far left where the SS City of Rio de Janeiro struck the rocks and foundered on February 22, 1901.


Shortly after 5 a.m., with visibility still at zero, disaster struck. The 345-foot steamer had veered too far south on its approach and suddenly ground to a halt on the jagged rocks of Fort Point, tearing a massive gash in its iron hull.
A strong ebb tide soon pushed it back off of the rocks and allowed the frigid winter waters of the Pacific to rush into the engine room and cargo holds.
Passengers and crew fought their way to the deck, but confusion reigned on the rapidly sinking ship. Within a matter of minutes, the City of Rio succumbed to its wounds and slipped beneath the waves, taking with it 128 of the 210 lives on board.

Now, with the help of several private partners and cutting-edge technology, NOAA’s Office of National Marine Sanctuaries has brought back the first-ever 3-D images of this long-lost shipwreck, which historians have called the “Titanic of the Golden Gate.” 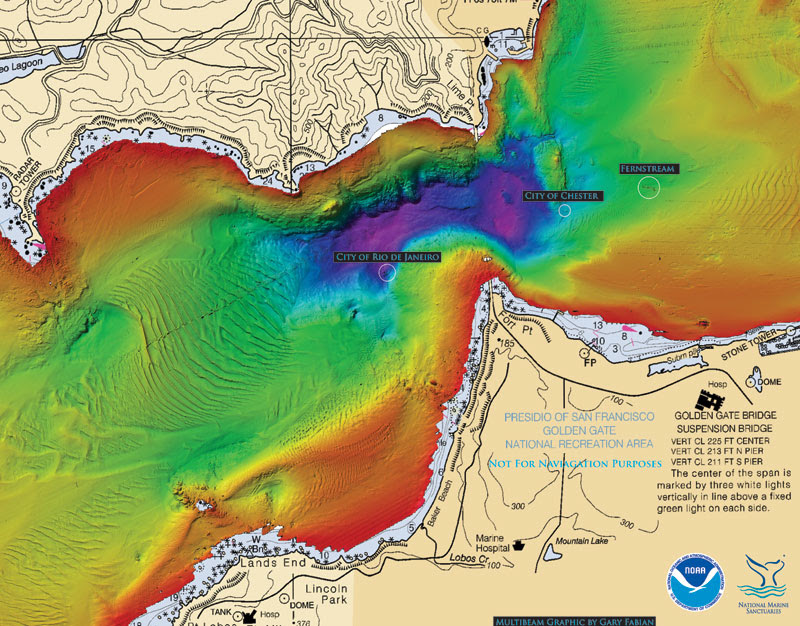 This November, a joint archaeological expedition led by the Office of National Marine Sanctuaries Maritime Heritage Program set out to document the wreck as part of a two-year study of shipwrecks in Gulf of the Farallones National Marine Sanctuary and the surrounding area. Bay Marine Services LLC provided a vessel and crew for the mission, while Hibbard Inshore LLC andCoda Octopus equipped the research team with a high-powered remotely operated vehicle (ROV) and 3-D sonar array to aid in the search.

West Coast Regional Maritime Heritage Coordinator Robert Schwemmer worked in cooperation with Maritime Heritage Program Director James Delgado and sonar expert Gary Fabian to pinpoint the location of the City of Rio, which lies 287 feet below the surface just outside the Golden Gate, not far from where it ran aground in 1901. 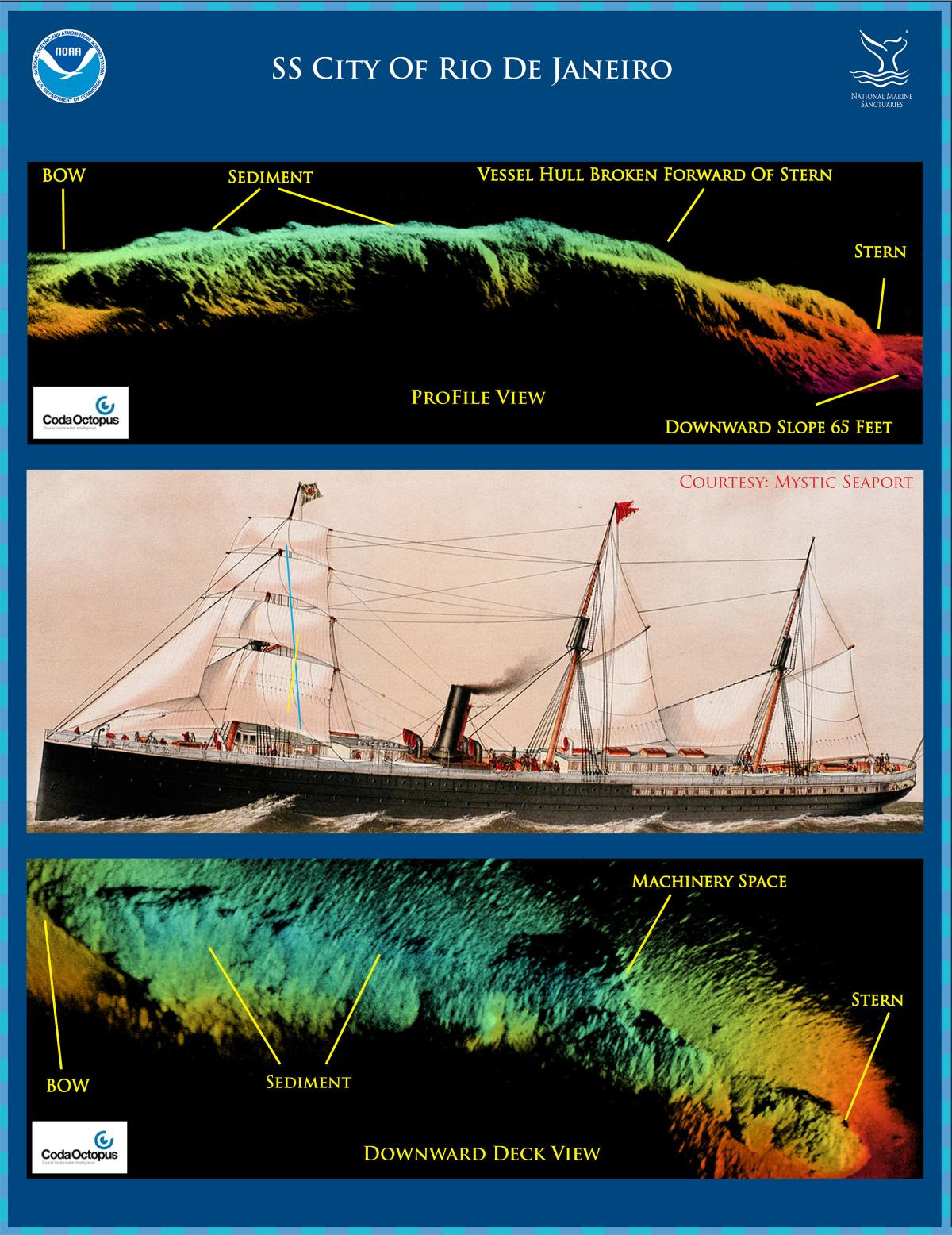 The 3-D model generated by the Coda Octopus “Echoscope” sonar also gave researchers an entirely new perspective on the condition of the wreck site.

What they found was a crumpled, scarcely recognizable iron hulk encased in more than a century worth of mud and sediment, lending support to the narrative that the ship sank quickly before many of its passengers could escape.

The expedition team also remapped the S.S. City of Chester,a second nearby wreck that was rediscovered in May 2013 by NOAA’s Office of the Coast Survey.
In stark contrast to the City of Rio, the Echoscope revealed in great detail the surprising level of preservation of the City of Chester’s frame and propulsion machinery, telling a very different story about the circumstances of its sinking. 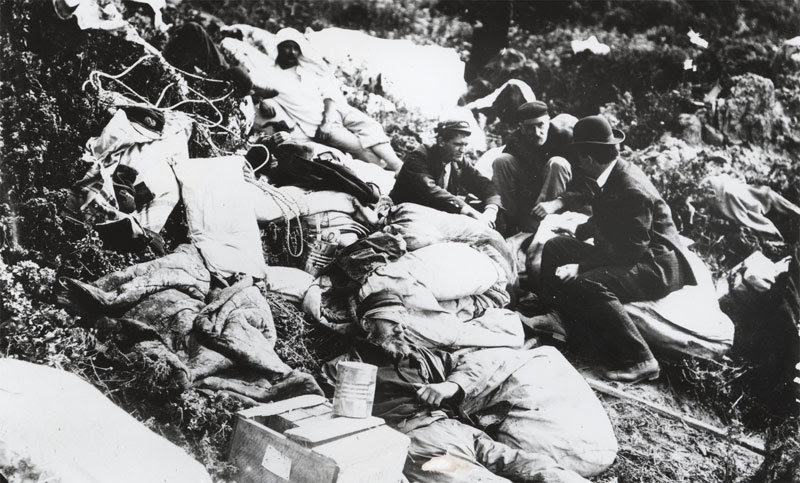 Through advanced technology and innovative partnerships, NOAA is breaking new ground in our quest to explore and understand our nation’s maritime heritage.


Shipwrecks once believed to be lost forever are now within our reach, and those we have studied in detail continue to give up new secrets with each subsequent expedition.
This discovery is a reminder of NOAA’s commitment to protecting the profound ties that the nation has to our history lying beneath the ocean’s surface.