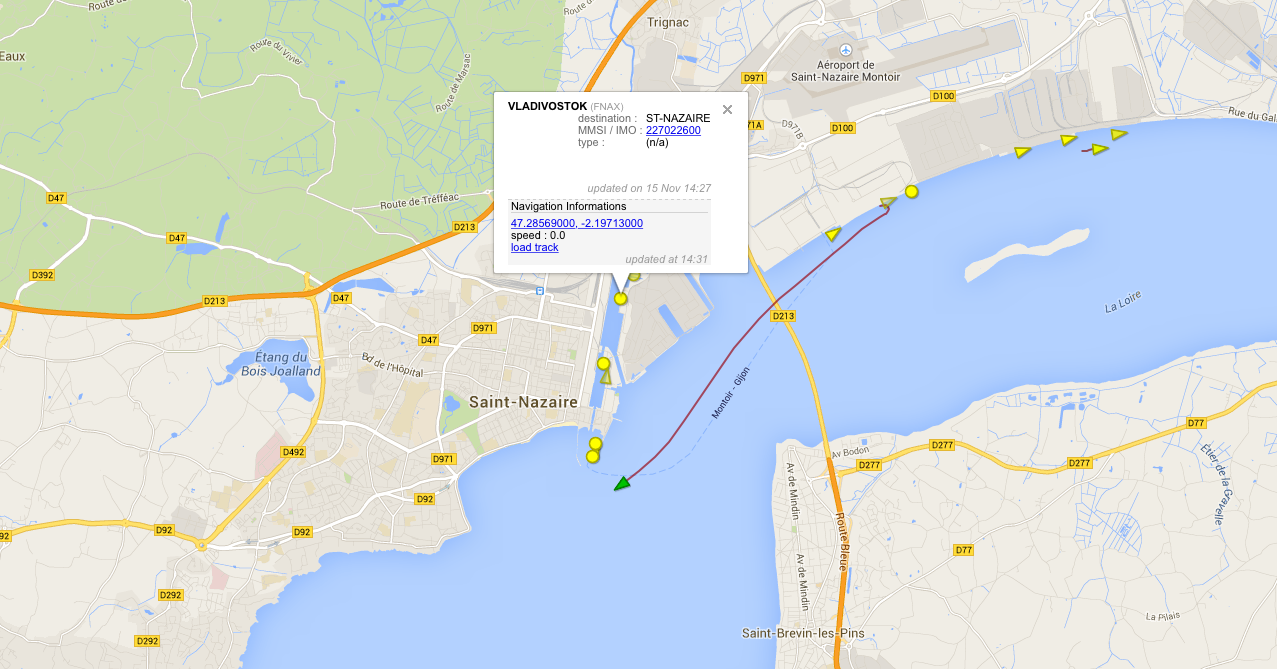 With our own AIS receiver installation (at our office at Hub Creatic in Nantes), we can observe the position of the 'Vladivostok' military vessel.

Waiting to get the Russian flag

The MMSI recorded in the AIS transceiver is 227 022 600.
(probably, a temporary MMSI, by the way previously used for trials at STX shipyard for MSC Preziosa in 2013)
The first three numbers shows the Country : 227 for France
Note : in the case where the ship is officially delivered by France to Russia, the MMSI might change to 273 for Russia.
That was the case yesterday between Thursday 13, 08:50 to Friday 14 14:00 UTC :
apparently this change of MMSI (273 549 920) was a test according DCNS, ordered by Veritas Bureau for delivering a future certificate of navigation.

Prime Minister Manuel Valls said on Friday that France would not be dictated to after an unidentified Russian official was quoted as giving Paris two weeks to deliver the first of two Mistral helicopter carriers or face possible compensation claims.

France has for months resisted pressure from Washington and other allies to scrap the 1.2 billion euro ($1.58 billion) contract and in September said it would only hand over the first carrier, the Vladivostok, if there was a lasting ceasefire and a political settlement in Ukraine.

With the situation worsening on the ground in Ukraine, France has again come under fire over the deal, while Moscow has tried to drive a wedge between Paris and its allies on the issue knowing that failure to deliver the carriers could damage France's image at a time when it is finalising other military contracts.
"Today, the conditions to deliver the Mistral aren't there," Valls told reporters.
"France honours its contracts, but France is a nation that counts, wants peace in Ukraine and that makes sovereign decisions without anybody from outside dictating how it acts."

An unidentified Russian source quoted by state news agency RIA on Friday said if the Mistral was not delivered by the end of November Moscow would seek compensation.

The comments were published on the day a Russian delegation, including arms exporter Rosoboronexport, had originally been invited by the Mistral's manufacturer DCNS - 65 percent-owned by the French state - to travel to France for a ceremony to transfer the first ship.
"We are preparing for various scenarios. We will wait until the end of the month then we will announce some serious claims," the unidentified Russian source was quoted as saying.
Analysts were looking at various amounts of compensation, the source said, adding that the sum would not be kept secret.

French President Francois Hollande said at the end of October he would make a decision during November, but his defence minister, Jean-Yves Le Drian, told parliament on Wednesday DCNS had not been given the necessary government export licence.
"No date for delivery can be fixed at this stage," he told lawmakers.
"A definitive decision will be taken when the time comes."

Europe and the United States have imposed numerous rounds of sanctions on Russia for its role in eastern Ukraine and EU foreign ministers will discuss further sanctions on Monday.

Hollande is due to meet Russian President Vladimir Putin on the sidelines of the G20 leaders summit in Australia this weekend.
"What's key - and the president will discuss it with several leaders during the G20 - is to rediscover the path to peace between Ukraine and Russia," Valls said.
"We're far from that today."