A robot takes a swim
PoseiDrone, a robot whose body was inspired by the bodies of octopus and squid, navigates a rocky underwater world.


From NYTimes by Katherine Harmon Courage

For years, roboticists have yearned to develop a flexible machine that can explore tight spaces, repair dangerous equipment and potentially even conform to the human body.


Now one of the first members of this new breed of robots is almost here.
It has sinewy arms, a powerful grip and the ability to work underwater without coming up for air.

Yes, it is an octopus.
Because octopuses can swim, crawl and manipulate objects, they make “the ideal underwater robot,” said Francesco Giorgio-Serchi, a scientist at the Research Center on Sea Technologies and Marine Robotics here, who is working on the project.
In a small seaside laboratory, he and others have been tinkering away on a prototype of a multiarmed robot they call PoseiDrone for the sea god Poseidon.
Pieces of half-built arms are scattered about, and an inflatable kiddie pool sits between tables.

It was in that modest body of water that their robotic octopus got its sea legs, as it were.
It did so well in the pool that the researchers borrowed a small boat and deployed it in the Ligurian Sea, still attached to their controls via cables.
It successfully swam in the waves and adeptly crawled along the rocky bottom.

Robotic technology is generally based on hard materials — a logical approach, because they can be controlled with precise movements and low computing power.
Soft robotics is something else altogether, promising “the mechanical versatility you find in natural organisms,” said Carmel Majidi, a mechanical engineer at Carnegie Mellon University’s Robotics Institute who is working to develop sensitive artificial skin and strong artificial muscles.
Imagine a roving vacuum cleaner that could literally squeeze itself into nooks where dust bunnies hide.
Or more grandly, Dr. Majidi said, exploration vehicles, construction drones, “wearable robots and maybe even implantable robots.”

Early efforts in the field date to the 1940s, when scientists developed pneumatic “artificial muscles” to be used in traditional robots.
Progress has inched along since then, producing small-scale projects like scooting soft-bodied caterpillars and pneumatic quadrupeds.
But the advent of 3D printing has greatly accelerated the chase.
Dr. Majidi said the technology had been “a bit of a game-changer,” enabling just about any research team — or garage tinkerer — to make new molds to create stretchy prototypes, a process that just a few years ago was slow and costly. 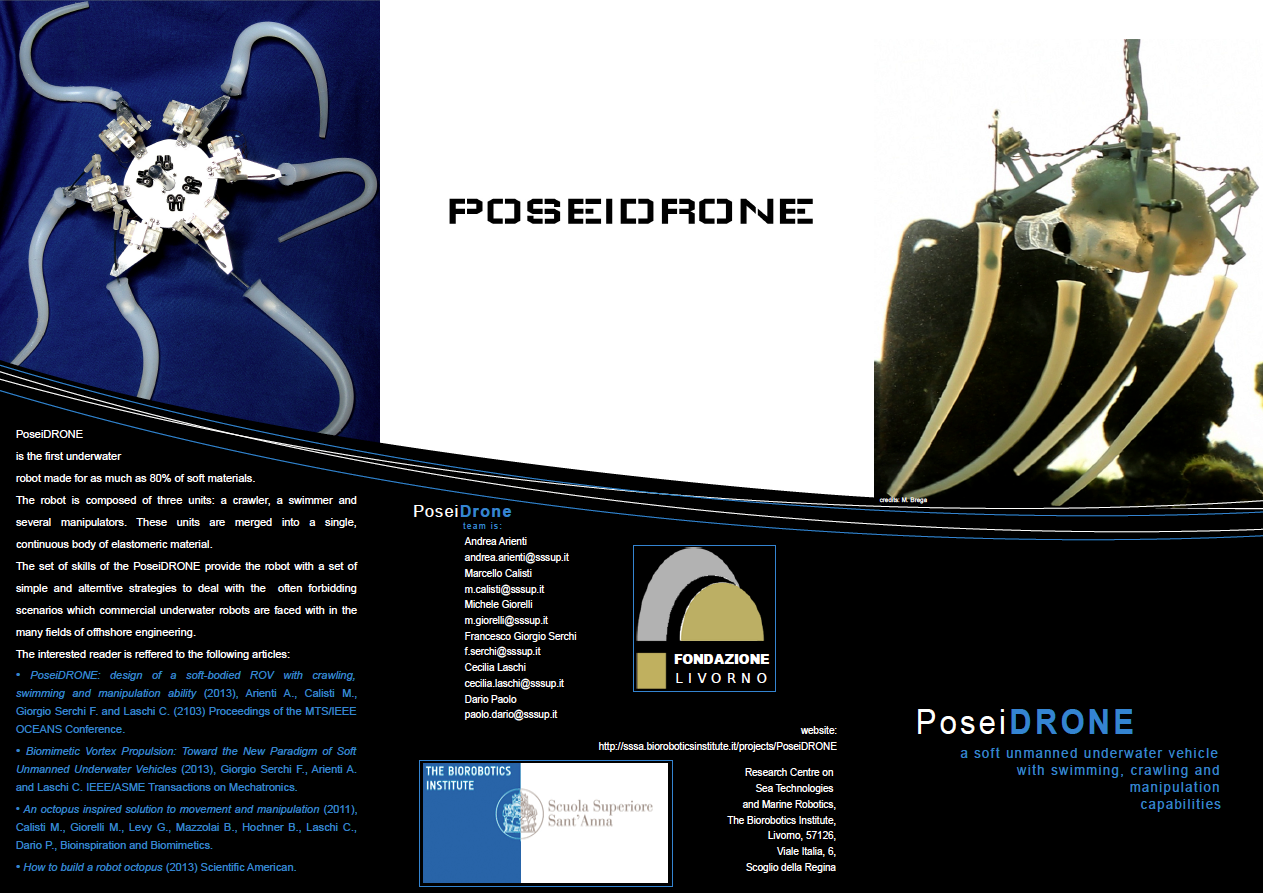 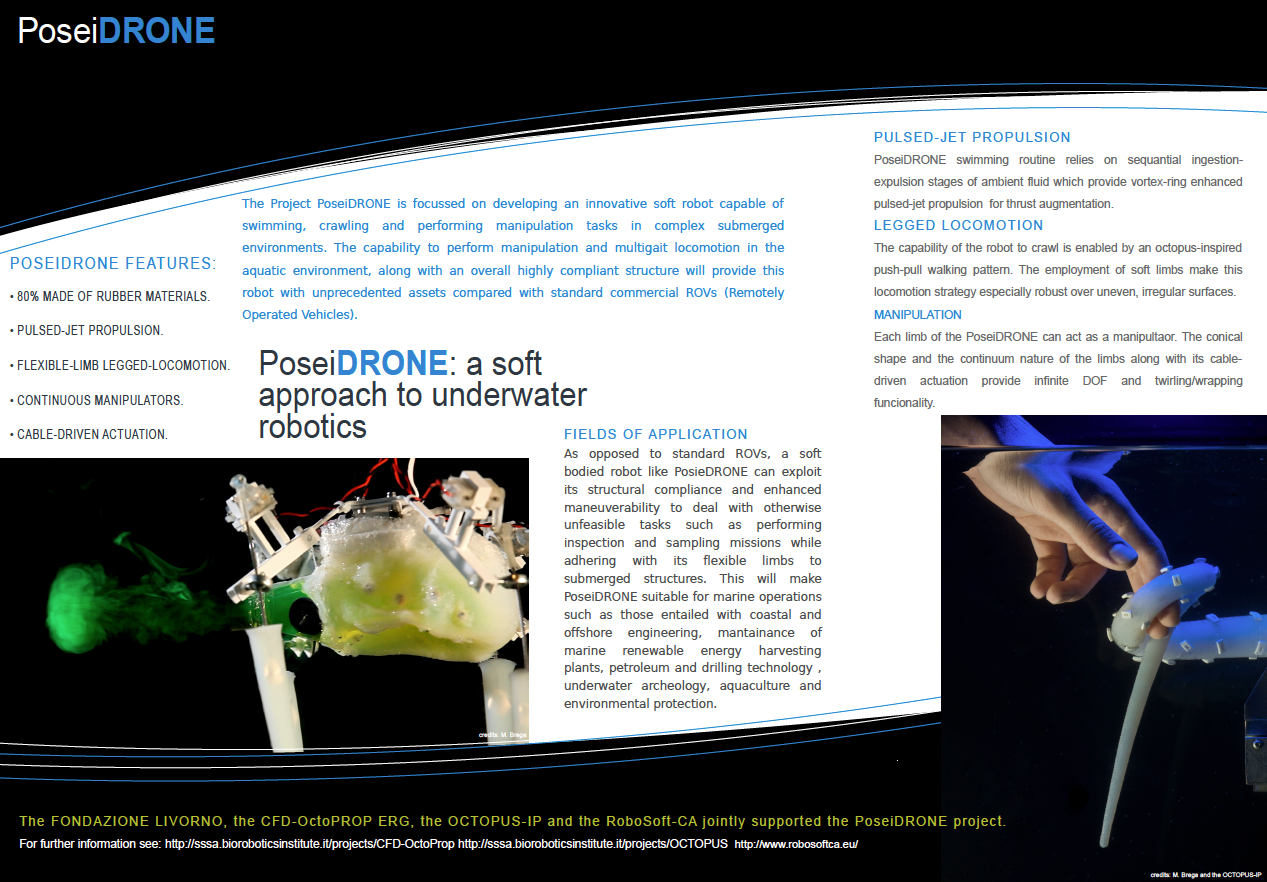 A group at Harvard used molds from a 3D printer to create a prototype of a soft, octopuslike four-legged robot that could be controlled via tubes of liquid or air.
And here in Italy, Dr. Giorgio-Serchi and his colleagues recently acquired a 3D printer that allows them to design, experiment and revise quickly.
They aim to replicate the key features of an octopus: eight arms to provide an almost infinite range of motion; the ability to squeeze through any opening larger than its chitinous beak; and an unusual nervous system in which the arms are semiautonomous and the central brain is thought to do little more than issue general commands (“Arms, let’s go catch that crab!”).

To make quicker headway, some of the PoseiDrone’s components, such as the electronics, remain hard for now.
The exterior will be silicone — a material whose density, like that of an octopus, is similar to water’s.

The drone’s potential missions include inspecting and repairing underwater turbines, wave-energy generators, oil rigs, ship hulls and perhaps fishing nets.
In contrast to a hard-bodied underwater bot, which would need to hover at a safe distance from such equipment, the PoseiDrone should be able to attach itself directly without damaging the equipment or itself, Dr. Giorgio-Serchi said.
Sending robots down to perform dangerous tasks could also help keep human divers safer.
The drone can already crawl, swim and even carry small tools.
But it is not yet ready to repair a turbine.

And although the researchers are applying for patents, it is still a crude specimen, a robotic Frankenstein’s monster bridging the eras of hard and squishy — currently only 80 percent soft materials.
“It’s still very much a work in progress,” Dr. Majidi said. And Mark R. Cutkosky, a professor at the Stanford School of Engineering, said: “How do we build stretchy conductors? That’s still a very open question.”
“It sounds pretty prosaic,” he added, “yet one of the biggest challenges is just wiring.
This was true 20 years ago, and it’s still true.”
The PoseiDrone’s movements still rely on external control of conventional motors and actuators.

Nevertheless, the octopus robot is more sophisticated than a standard robot covered in rubber, Dr. Giorgio-Serchi said.
Its abundance of soft, elastic materials enables it to do things most other robots cannot — much as stiff-jointed humans cannot do what an octopus can, despite our soft skin and muscles.

“Without the soft part,” Dr. Giorgio-Serchi said, “it would just be a pile of motors and cables.”
Also like real cephalopods, the PoseiDrone, whose body is about the length of an adult human hand, could be just about any scale — from fractions of an inch to dozens of feet across.
A larger version is in the works.
And perhaps not reassuring  to those who fear a robot uprising, the bigger it is, “the easier it is to make it stronger — and fast,” Dr. Giorgio-Serchi said.

Virtually any conceivable form is now just a click away, so why do researchers focus on animal models? Dr. Cutkosky, who has built a climbing robot with gecko-inspired grippers, says we inevitably look to the natural world for inspiration.
And caution.
Comparing the octopus robot to its real-life counterpart, he said, “It’s probably a good thing they’re confined to water.”