From Nature by Jeff Tellefson

Six centuries ago, Chinese explorer Zheng He set sail into the Pacific Ocean with hundreds of vessels, starting a series of seven expeditions that extended China’s maritime influence from Indonesia to the Red Sea. 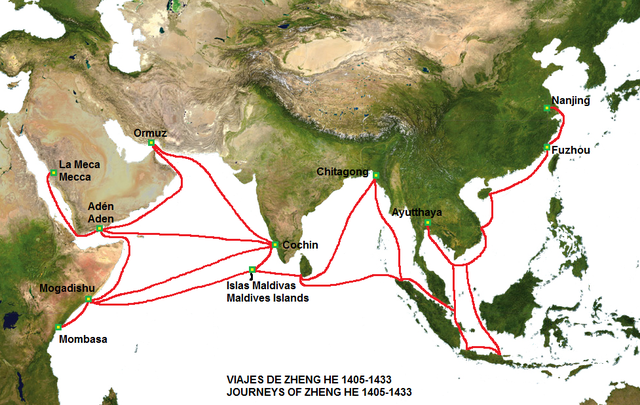 The route of the voyages of Zheng He's fleet.

China’s latest foray into the Pacific will be smaller but much more advanced.
It will plumb a part of the ocean that could hold important secrets about east Asia’s summer monsoon and the periodic changes in ocean temperature known as El Niño and La Niña.

Set to begin in April, the five-year research project will deploy five ships, a remotely operated submersible and an array of sub-surface moorings off the eastern coasts of the Philippines and Indonesia.
The region is home to the western Pacific warm pool, a patch of surface water that is formed by trade winds that influence the formation of El Niño and La Niña in the eastern Pacific.
The oscillation between these periods of warming and cooling affects global climate, and the pool itself might influence regional climate events such as the Asian monsoon.

The Western Pacific Ocean System (WPOS) project is the largest single investment yet in China’s growing ocean-sciences programme, says Song Sun, a marine ecologist at the Chinese Academy of Science’s Institute of Oceanology in Qingdao.
Over the past three years, the country has invested roughly 1.2 billion yuan (US$200 million) into Pacific Ocean science.
Another $165 million will be spent on equipment and basic research costs for the WPOS project, and around 1,000 people are expected to participate.
“It is a dream for Chinese marine scientists to go to the deep blue,” Sun says.
Six arrays, comprising 29 moorings, form the core of the effort (see ‘Deep dive’).
The arrays will monitor ocean currents at depths of between 400 and 6,000 metres, including the start of the powerful Kuroshio current, which runs northeastwards through the East China Sea.
“We have had sporadic observations in different seasons, but we’ve never been able to get a comprehensive view of the oceanic currents in this region,” says Wenju Cai, a climate modeller at the Commonwealth Scientific and Industrial Research Organisation in Aspendale, Australia. 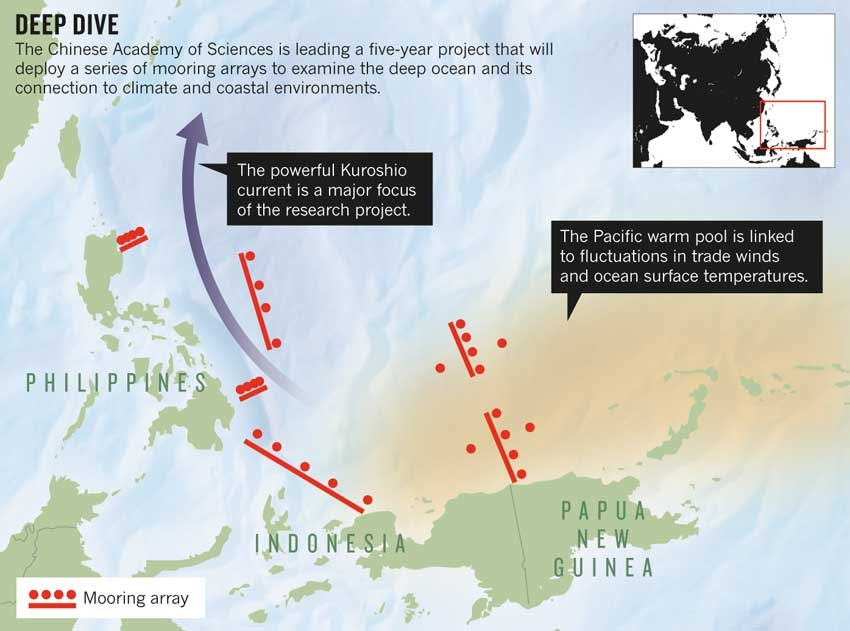 “It is a dream for Chinese marine scientists to go to the deep blue.”

Dunxin Hu, a colleague of Sun’s and a leader of the WPOS programme, says that the data should help oceanographers to understand the movement, temperature and nutrient load of various currents that circulate through the warm pool.
Scientists are particularly interested in the Kuroshio current because it plays an important part in global ocean circulation and helps to shape coastal ecology.
A key part of the ecosystem research will track the flow of nutrients into China’s coastal waters and assess their influence on plankton blooms and fisheries.

The data could also prove valuable for climate modellers.
Trade winds from the east have been unusually strong over the past two decades (M. H. England et al. Nature Clim. Change http://doi.org/rdt; 2014), which has pushed greater volumes of warm water into the region and, ultimately, into the deeper ocean.
The process has helped to stall the rise in global temperatures, which have remained relatively constant since 1998, but exactly what is happening in the deep ocean remains unclear.
Hu says that data from the moorings could be used to trace the heat’s journey through the deep ocean.
They could also reveal how the warm pool influences atmospheric convection and therefore regional climate, such as the monsoon in China.

One of the biggest challenges will be linking the deep-sea data to conditions at the ocean surface and in the atmosphere.
Many of the moorings will be in fishing areas, and worries about theft and vandalism mean that they will not include surface buoys.
To get the surface data, scientists will need to incorporate observations from satellites and from the global Argo network of floats that provide periodic data about temperature and salinity to a depth of 2,000 metres.
“That, I think, is the missing piece,” says Shang-Ping Xie, a climate modeller at the Scripps Institution of Oceanography in La Jolla, California.

Researchers also plan to investigate the deep-sea geology and ecology.
They will deploy sonar-imaging equipment from a ship dubbed Kexue (which means ‘science’) to map the ocean floor.
After identifying seamounts and hydrothermal vents, the team will send down the remotely operated submersible Faxian, which is capable of diving to roughly 4,500 metres, to study the creatures that inhabit these areas, such as sponges and exotic fish.

Peter Brewer, an ocean chemist at the Monterey Bay Aquarium Research Institute in California, helped to develop the submersible.
He admires the Chinese scientists’ dive into ocean science.
“They are at the stage where they have all of the hardware,” he says.
“Now they need to train some young scientists so that they can take advantage of it.”