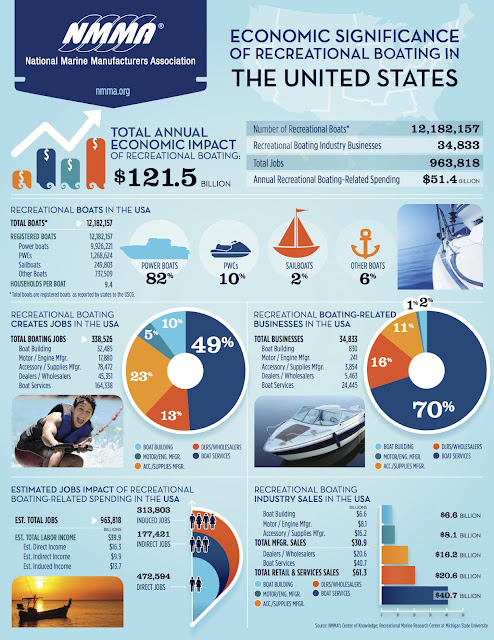 Economic significance of recreational boating in the US

Small fiberglass and aluminum outboard boats 26 feet or less in size, continued their upward climb with an 11.3 percent increase in the number of new boats sold.
Outboard boats are the most popular type of new powerboat sold, making up approximately 82 percent of the market.
Ski and wakeboard boats are seeing healthy growth with an increase of 13.4 percent new boats sold in 2012.
Jet boats, which are small fiberglass boats less than 26 feet in length, are a growing category. Of the 157,300 new powerboats sold in 2012, 4,500 were jet boats.
New jet boat sales increased 36.4% in 2012.

“Summer is a peak selling season for recreational boats, accessories and services throughout the U.S. as people look for ways to disconnect from the daily grind and enjoy fun times on the water, “ said Thom Dammrich, NMMA president.
“New boat sales have historically been a barometer for the U.S. economy and the steady sales increases we’re seeing is being reinforced by the slow uptick in consumer confidence, housing and spending. As economic growth continues, we anticipate sustained steady growth through the remainder of 2013.”

Of the estimated 232.3 million adults in the U.S. in 2012, 37.8 percent, or 88 million, participated in recreational boating at least once during the year.
This is a six percent increase from 2011 and the largest number of U.S. adults participating in boating since NMMA began collecting the data in 1990.
Recreational boating participation has steadily increased since 2006.

Growing participation is a priority for the recreational boating industry as it drives new boat sales.
Boat manufacturers, dealers, marinas, and other marine organizations joined together to form Discover Boating, a consumer program to grow participation and create a positive boating experience.
The North American effort provides resources to help those interested in boating get started and promotes the fun of the boating lifestyle through a national marketing campaign.