Snoopy Sloop 8, the latest robot sailing boat from Team-Joker, may attempt to cross the Atlantic, from the UK south coast to the USA east coast before the end of 2012.
If not, it may try next year :-)
This is part of the friendly, international competition known as MicroTransat.
The video starts with recent clips of Snoopy Sloop 8 being tested, then shows the history, including sinkings and rescues, since May 2008.

A retired Nato scientist has launched what he hopes will be the first unmanned boat to cross the Atlantic.

A Global Positioning System (GPS) computer is designed to pilot the boat for the 5,000 miles (8,000km), but he admitted it would be a "real struggle".

It is thought no unmanned boat has ever crossed the Atlantic.
Recent tries hit weather and technical problems.

Mr Lovelock has developed the £450 boat on Bray Lake near his home in Sunninghill, Berkshire, over the past four years.
He is making the attempt as part of the Microtransat Challenge (web) to become the first unmanned vessel to cross the Atlantic Ocean from a point to the south of Ireland. 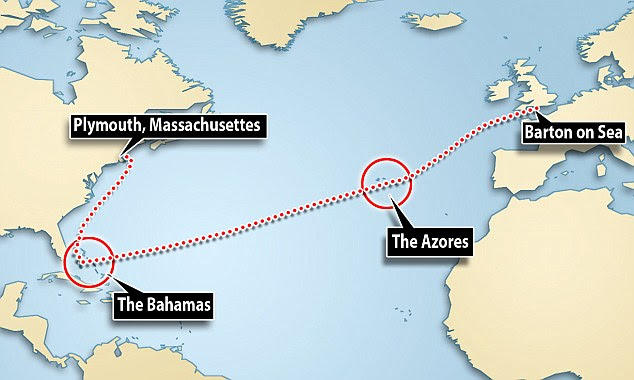 The challenge: Snoopy Sloop will depart from Barton-On-Sea, then sail along the English Channel before heading south towards the Azores and then off to the Bahamas, to eventually land in Plymouth, Massachusetts

A tracking device on board the solar-powered boat allows internet users to track its progress on its pre-programmed journey from Barton-on-Sea to the Bahamas on his website.

Travelling at 3mph, it would take about six months to complete the trip.
He said: "We'll just throw it into the water and see if we're lucky.
"I'm kissing bye-bye to a lot of hard work - let's hope it doesn't all end in tears.
"The chances of something hitting it are pretty remote - it should just get brushed aside."

Alongside the home-built technology on the boat is a model of cartoon dog Snoopy at the bow, which Mr Lovelock said showed he was not taking the project "too seriously".
"If it doesn't work I've got plenty of other boats and bits of boats sitting around the house," he said.

Since 2010, two French boats have foundered in bad weather and a University of Aberystwyth vessel suffered technical failure.