The surfers who really know how to chill out: Daredevils take the plunge in icy ARCTIC waves for the ultimate ride 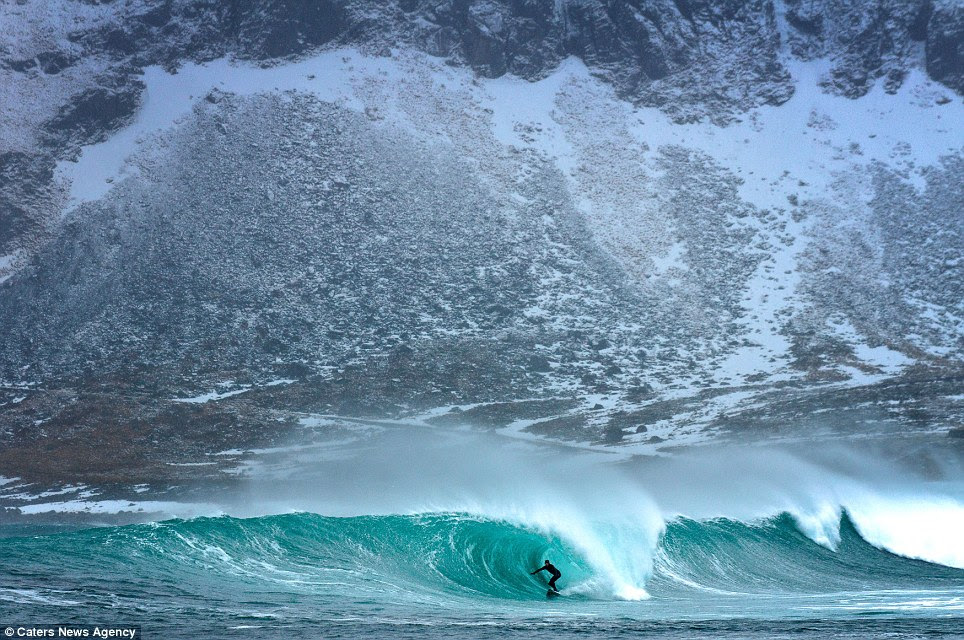 Refreshing: A surfer rips up one of the waves beneath breathtaking backdrop of snow-covered mountains off the Lofoten Islands, in Norway
photos Chris Burkard

The icy waters of the Arctic would hardly be most people's first choice for a day at the the beach.
But for these fearless surfers it provides the perfect destination for monster waves.
The daredevils braved the chilly conditions in the crystal clear water as they enjoyed the powerful swells off the Lofoten Islands, in Norway.

Surfers Dane Gudauskas, Alex Parker and Keith Malloy normally carve up the golden beaches of sunny California but made the trip to the Arctic, where temperatures as low as just 2-3C, after hearing about the smooth waves. 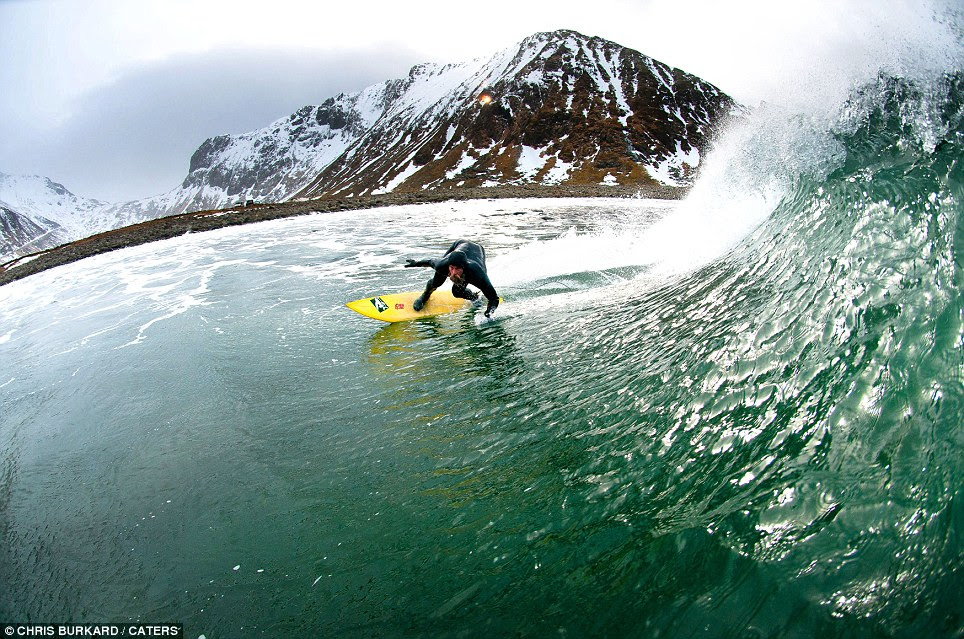 Super cool: Surfer Keith Malloy carves up an icy wave in the Arctic, where the water temperature is as low as 2C. He's more used to the golden beaches of California Don't catch a cold! Mr Malloy crouches in the barrel of one of the powerful waves. He's wearing a thick wetsuit, hood, gloves and shoes to prevent pneumonia
After putting his wetsuit on, surfer Mr Gudauskas , 26, walked the ice-covered road to the beach through snow as high as his waist - all just to reach the water's edge.
They wear full wetsuits with shoes and hoods covering as much of their skin as possible.
But Mr Gudauskas said that once the water hit his face it felt 'like fire'.
They have to warm up before entering the water - and they contend with the risk of catching pneumonia. 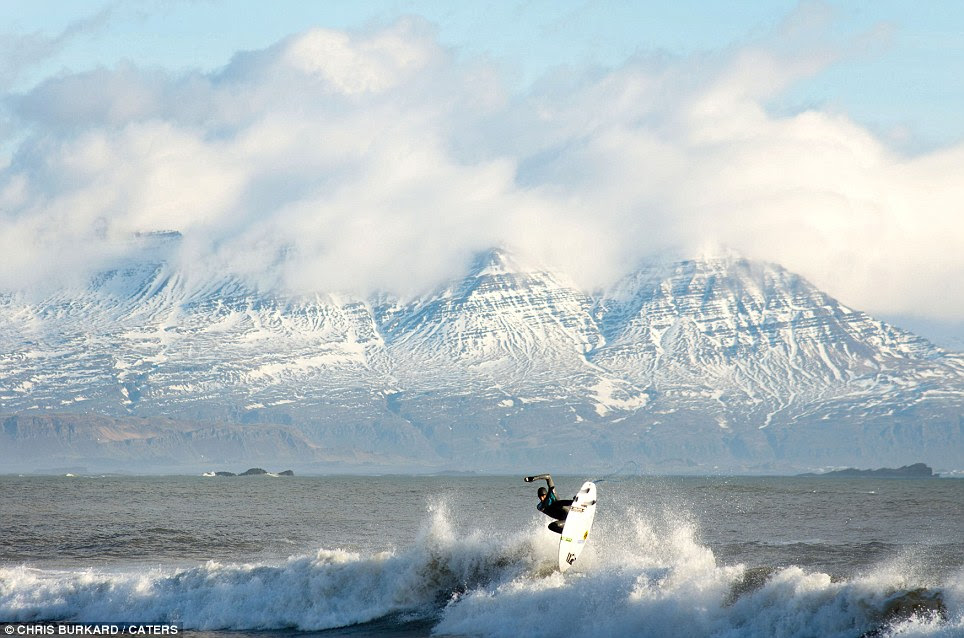 Breathtaking: One of the surfers performs a grab after getting some air on one of the less threatening of the Arctic waves. Behind him the stunning scenery makes for an impressive picture 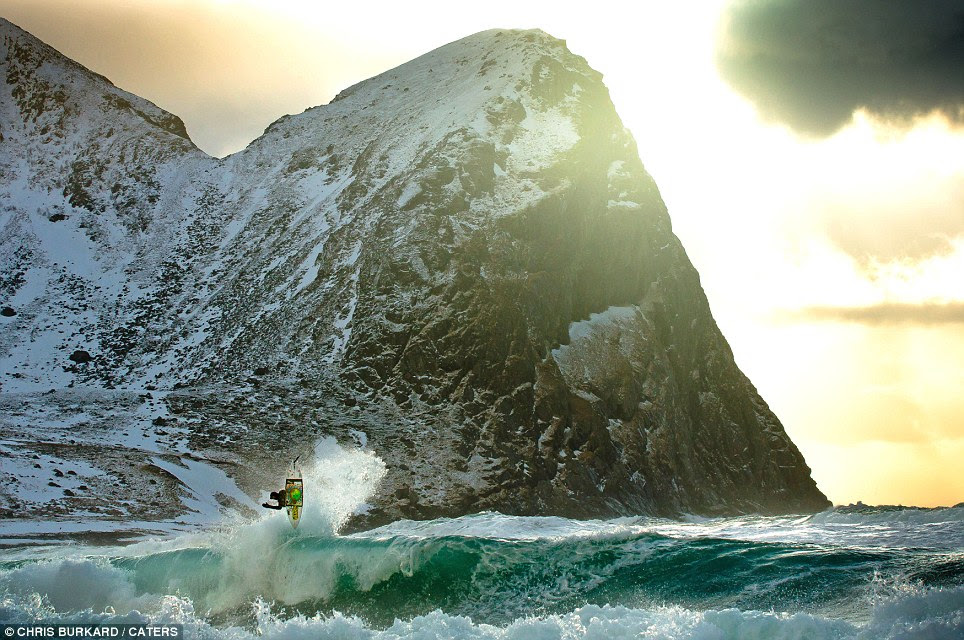 Golden sun rays light up the sky, but the temperatures in the water and air are still dangerously low.

The men had to take extra precautions to prevent them from catching pneumonia
Mr Gudauskas said: 'When the water hit any exposed skin it would burn like fire until your body temperature warmed up from paddling.
Only then could you get the mojo working.
'The region is pretty cold I'd imagine by any standard.
The air was ranging from 2C to way lower depending on the day and wind chill.
'Winds were very strong through the valley and felt like they could cut you in half - it must have been minus degrees fairly often and the water was probably 2-3C. 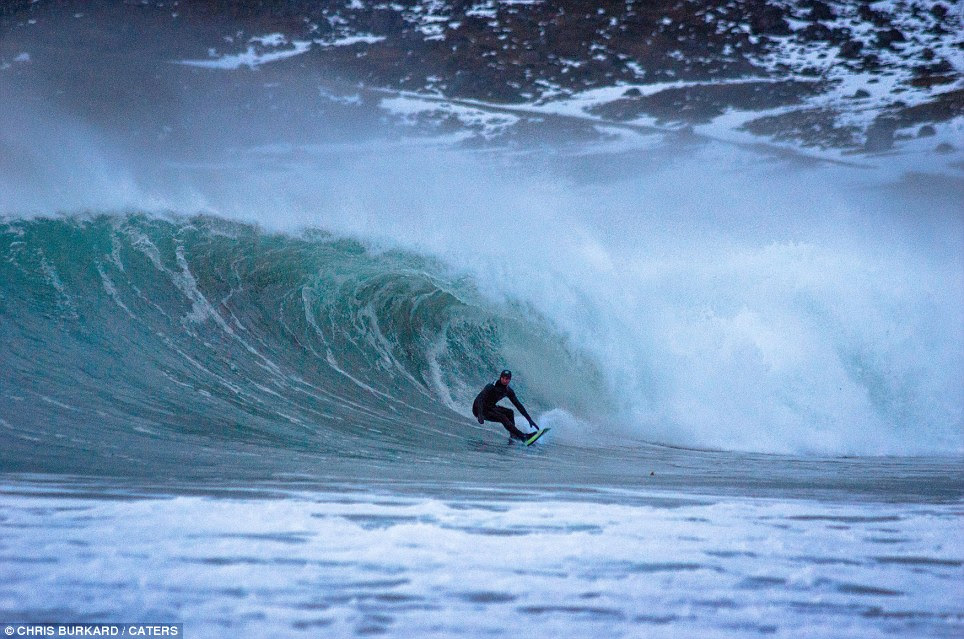 Extreme: One of the brave surfers performs a turn after dropping in to one of the waves. They have to warm up before entering the water if they are to survive the conditions 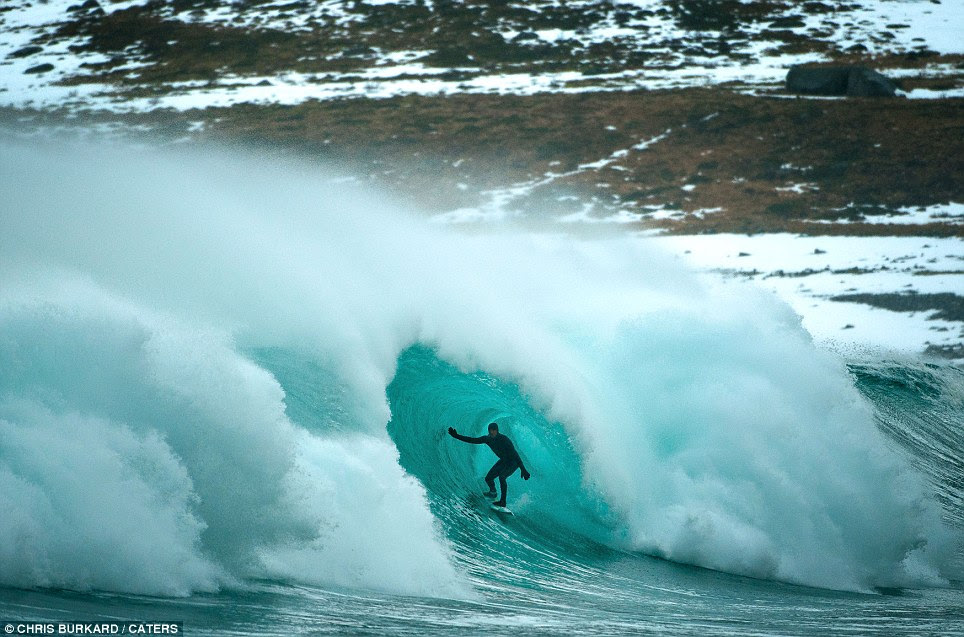 Foam from the clear turquoise waters sprays around the surfer as he trails a hand through the swell. They have to walk across rocky shores to reach the remote waves 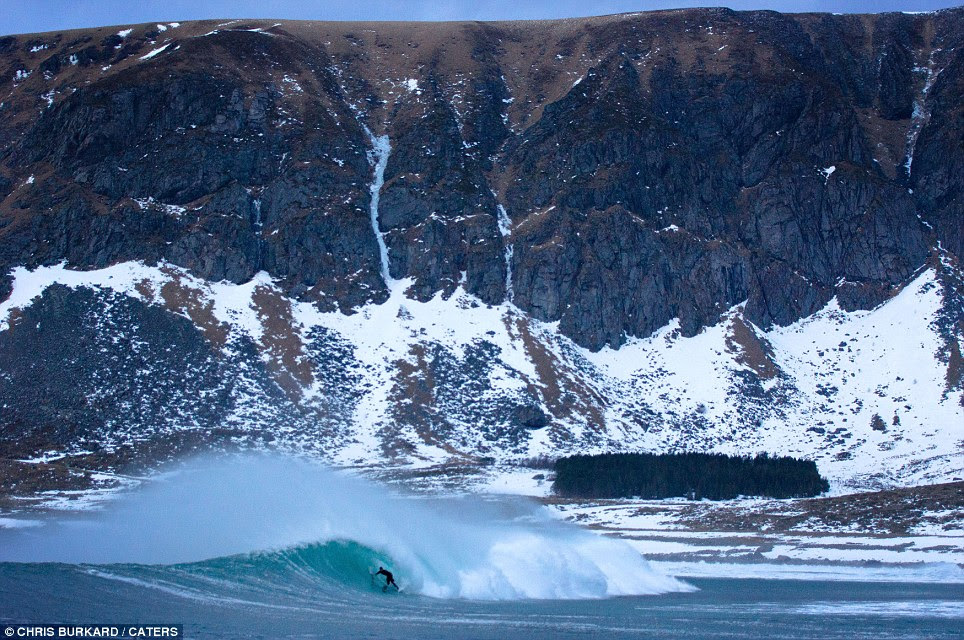 It's a bit fresh out there: The clean powerful swells are rarely surfed in winter, when most people consider the water too cold to venture in to
'It's a really strange sensation entering water that cold. We're wearing wetsuits between 5-7mm so the only parts that really feel the cold when you first enter is any exposed skin so mostly just your face.
'I remember it felt like fire - an insane sensation and very uncomfortable. If you had to duck under consecutive waves you would get a crazy headache and it felt like my eye sockets were physically swelling to the point I thought they might swell my eyes shut.
'I don't think it's too dangerous unless you don't warm up. Although pneumonia would be pretty easy to get if you don't know what you're doing and that can be serious. 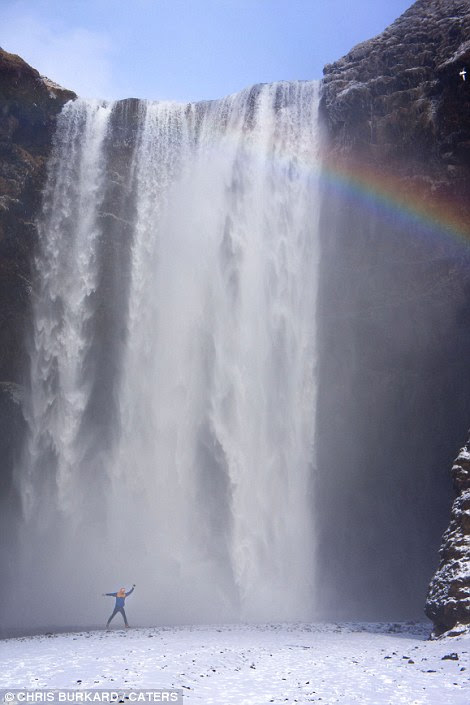 A rainbow appears through the mist of an Arctic waterfall. 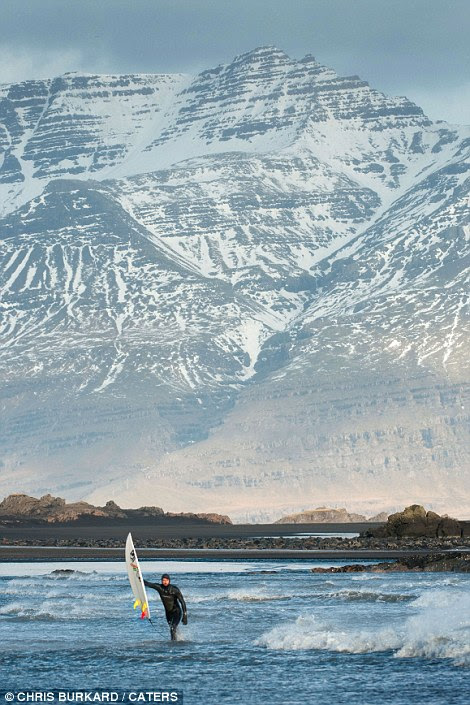 Right, a surfer runs back through the water, no doubt in a hurry for some warmer conditions 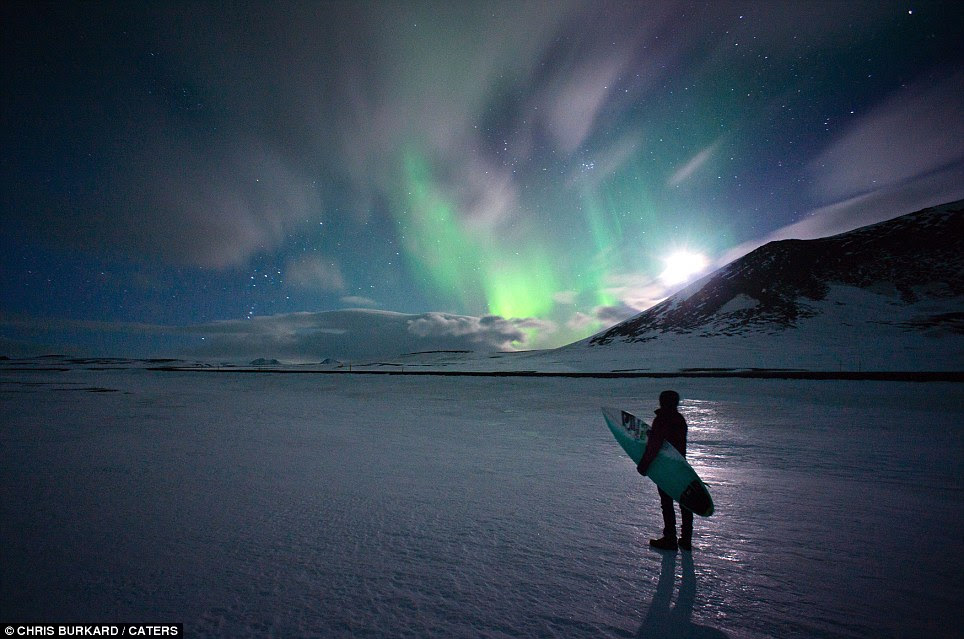 Beautiful: The temperatures in the water may be close to freezing, but the scenes of the Norther Lights are simply stunning 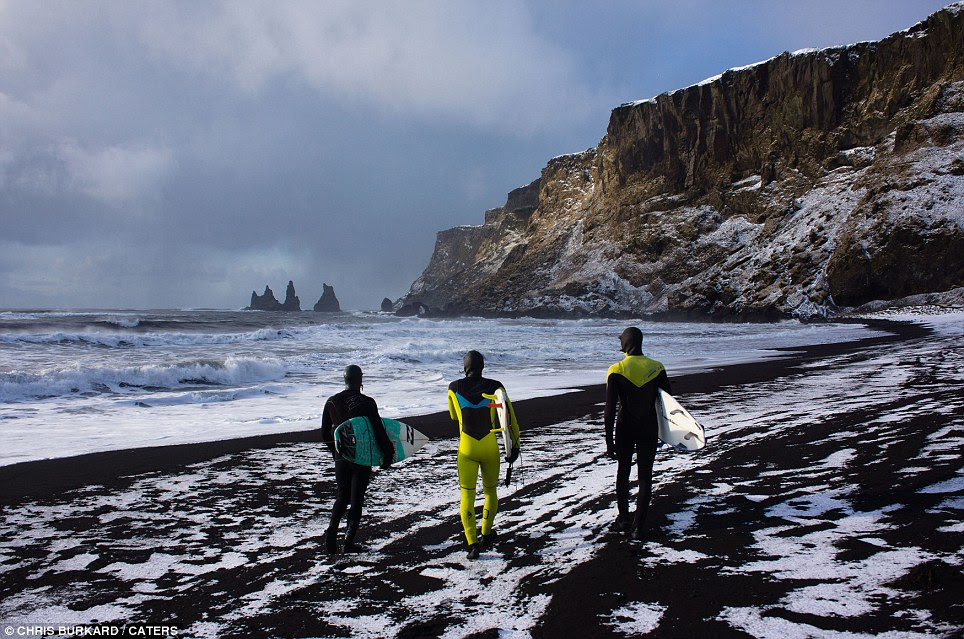 Remote: The three surfers survey the waters. They had to walk through the ice-covered road to the beach and through snow as high as his waist - all just to reach the water's edge

'Overall it was an awesome challenge. We were there a week and a half and the weather spanned from full snow white-outs, to melting snow on the hills, then right as we were leaving we could barely drive from the house as a blizzard nearly snowed us in.
'I've been surfing relatively my whole life - I was always around the ocean and it has been a natural progression.
'But this was extremely different from what we're used to here in California, mainly just the harsh conditions but I loved it and every part of it. 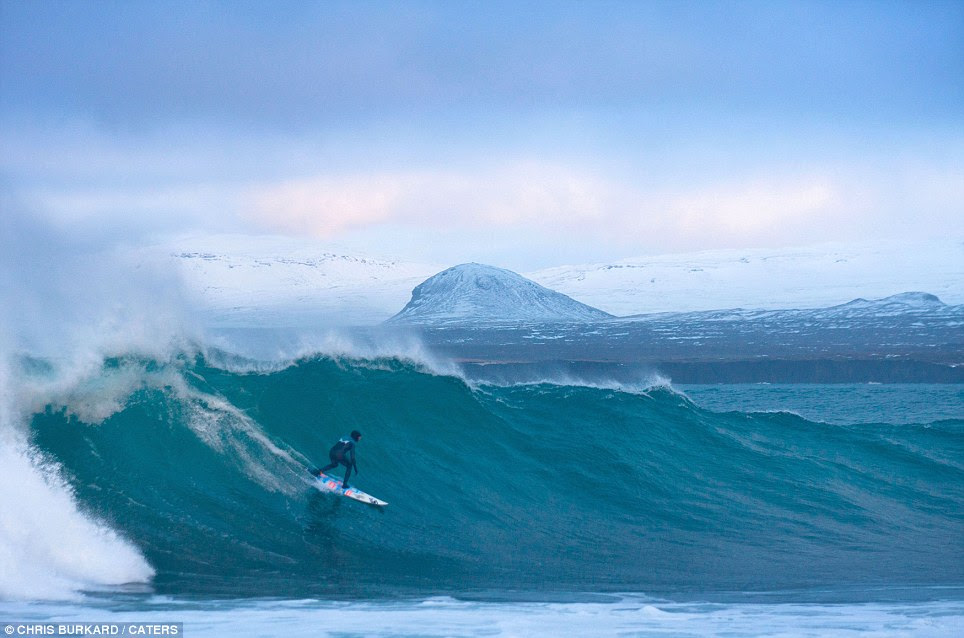 Deadly power: Clear blue skies can be seen above the Arctic waves, which many people describe as 'unsurfable' during the winter months 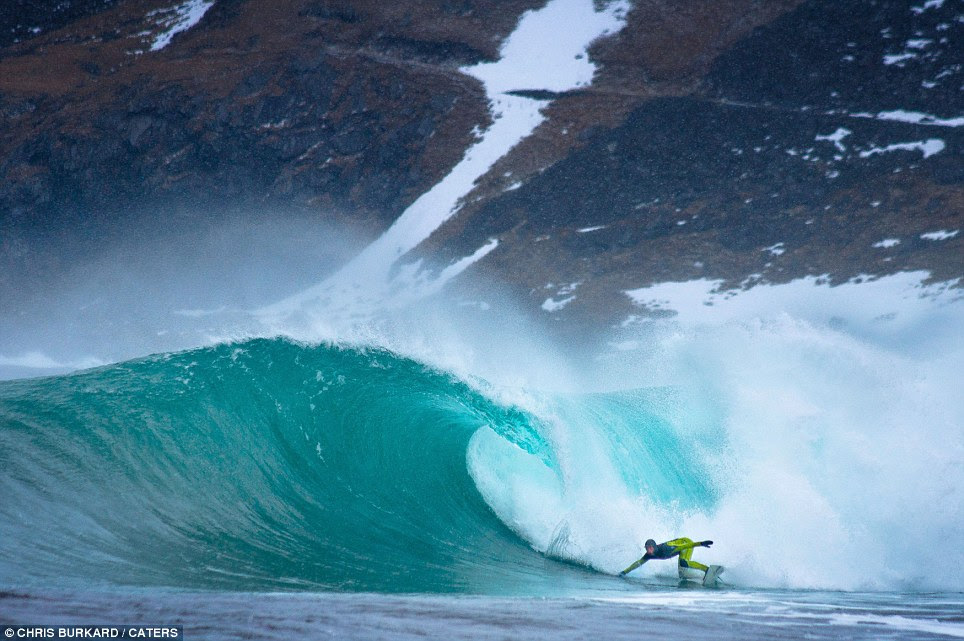 Skills: The surfer performs a frontside turn on the right-hand break. 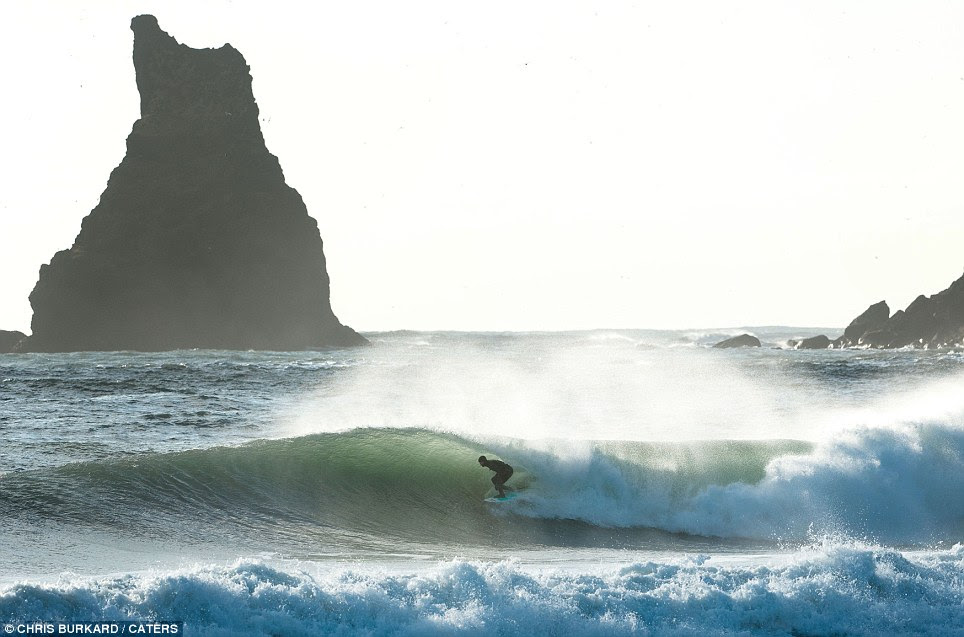 Radical: The sportsman ducks inside the barrel of a smaller wave. In the distance the perilous rocks can be seen 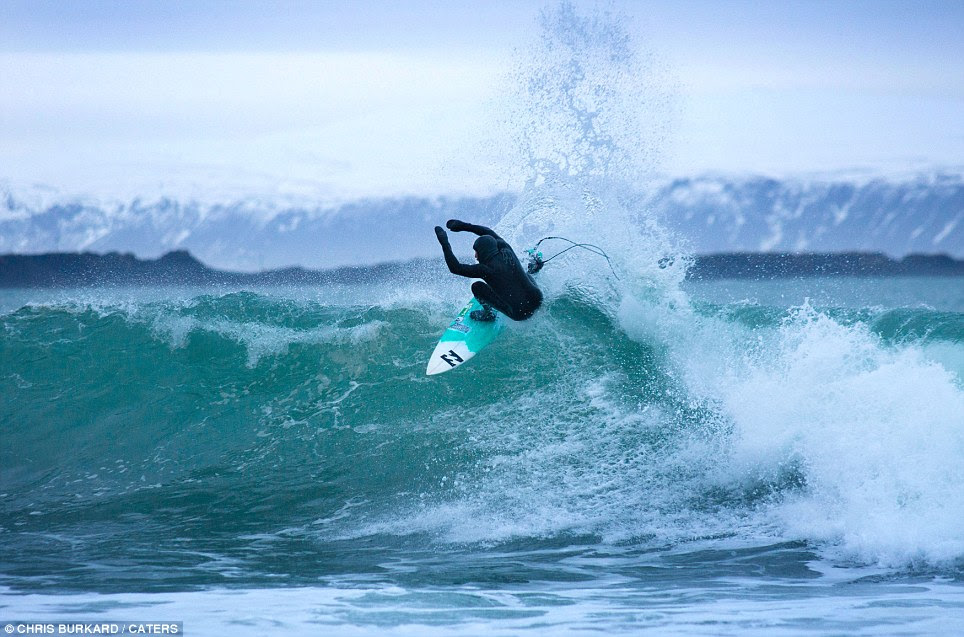 Carving it up: A surfer performs a stunt on the chilly 6ft high wave.

The conditions looked 'punishing' said the photographer
'I've never done anything like it before, in fact I think it had been almost 10 years since I had seen snow but I relished the experience and the challenges that surfing in the snow presented.'
Most surfers tackle the cool waves in spring - as the Arctic Circle emerges from its dark winter during the time the snow is melting and the ocean calms down.

But Dane and the team went over during wild winter chaos most people would describe as unsurfable and conquered even the most powerful of waves.
The trip was the brainchild of photographer Chris Burkard, 26, who had an aching desire to go somewhere that would be freezing in the winter time 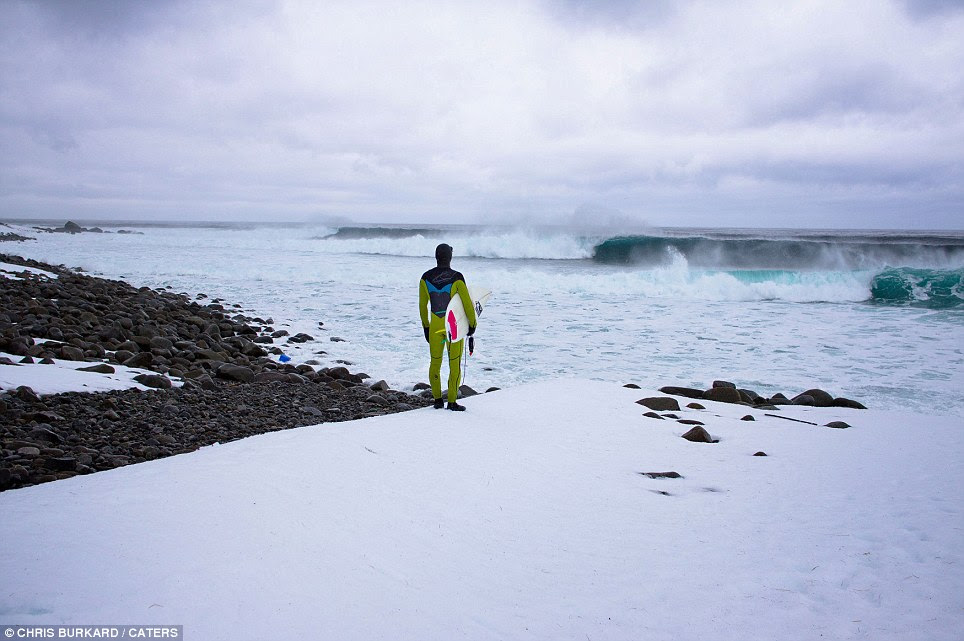 Should I go in? The surfer, whose wetsuit is around 7mm thick in order to keep warm, looks out across the ocean as he studies how the waves are breaking 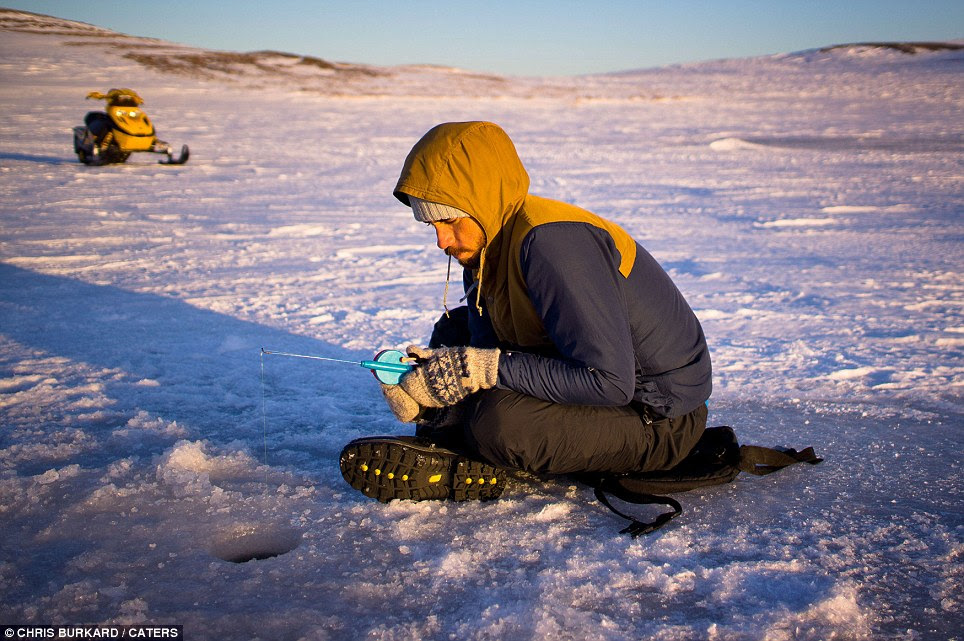 Holed up: Alek Parker takes a rest from hitting the waves. In California he would probably lay on the golden sands, here he tries a spot of ice fishing 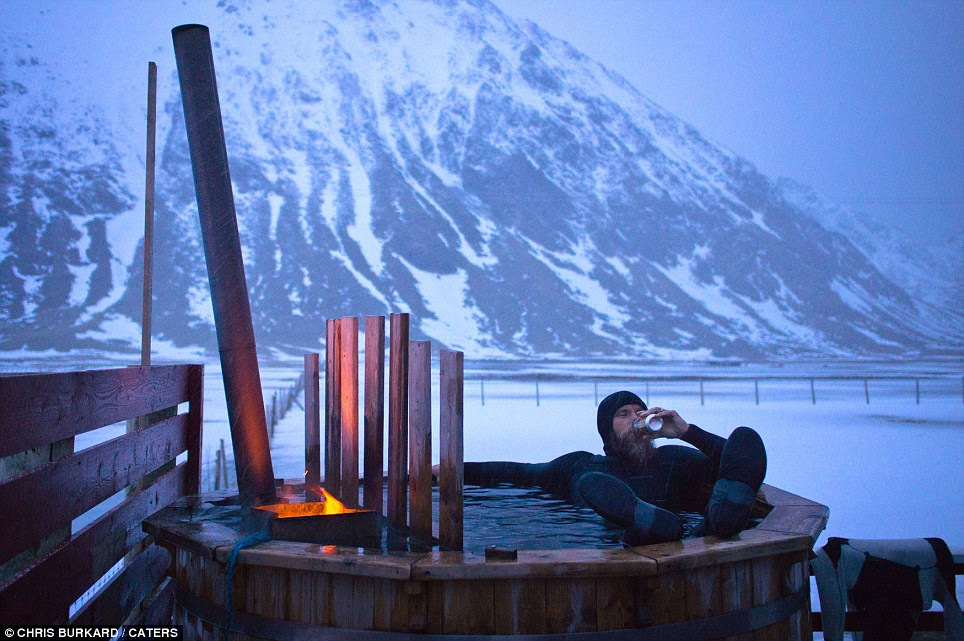 Chilling out: Keith Malloy rests in a hot tub with a can of beer after a tough day surfing icy Arctic waves 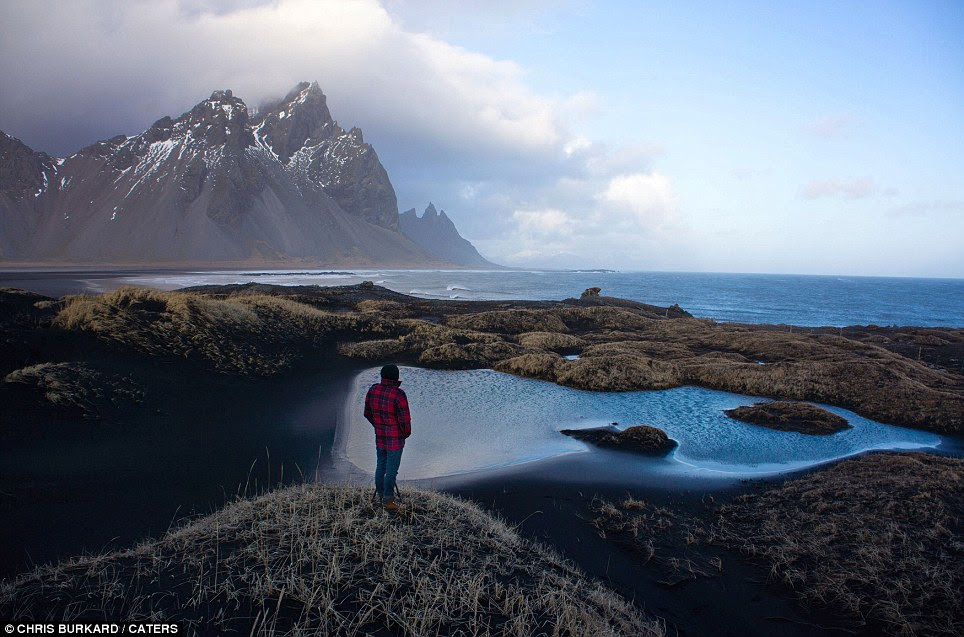 Mr Parker wraps up warm in a red jacket and wooly hat as he looks out to sea.

Reaching the beach across the rocky shore was one of the biggest challenges
He said: 'I've seen it in the summer but in the winter it looked punishing. We wanted to see if it could be done and the weather was worse than we ever imagined.
'It was so difficult with rain building up on my camera. I tried to go swimming but I could feel my vital organs shutting down and all my blood rushing to my heart to protect it.
'I swam a couple of days but they were in the water every day. Luckily they're on their boards above the water most of the time but I think they might have started to get used to it.
'I had to wear thinner gloves to handle the camera so it was almost unbearable. I would get back to the car and simply couldn't move. It was a cool but brutal experience.'
Posted by Peio at 1:05 AM