Book review : Beyond the Blue Horizon 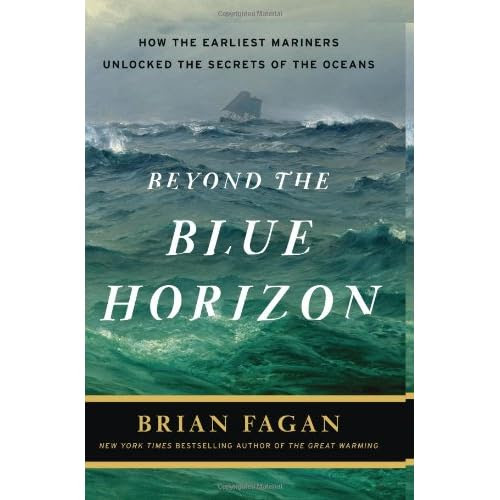 In Beyond the Blue Horizon (Bloomsbury £20), Brian Fagan – a California-based anthropologist and experienced sailor – also focuses on the seas but in this case presents us with a vivid picture of the nautical experiences endured by the first sailors who, in tiny canoes and rafts, made astonishing ocean-wide journeys more than 50,000 years ago and who laid the planet open to human conquest.
Those journeys changed the course of history and Fagan gives rigour and depth to this overlooked chapter of our history.

Brian Fagan’s stated aim to discover how and why the earliest seafarers set sail out of sight of land to seek distant shores is ambitious in the extreme.
He starts his quest in the Far East, during the Ice Age, when humans began moving along what is now the Indonesian archipelago towards Australia, and this is where the book is at its most problematic.
Not only are there no records, nor a single extant artefact, but even the very shorelines along which they sailed – or paddled – are long lost under seas that rose when the ice melted.
Any conclusions as to how and why early Homo sapiens took to the waters must necessarily be based on supposition.
But if anyone is up to the job it is Fagan, a professor of anthropology at the University of California and an experienced sailor.

Fagan speculates that the secret to decoding the seas 50,000 years ago would have been through observation, principally of the winds and the seasons, as well as such signals as the passage of migratory birds or the feel of waves refracted off an island unseen over the horizon.
Such knowledge was built up over time and Fagan suggests that the first boatmen came from societies as intimately attuned to the tempers of the sea as they were to the land.
He is in awe of these early navigators, and some of his theories have a delightful campfire-side quality about them: “Many Australian Aborigines are remarkably adept at handling dugouts in rough water."

An Indian Ocean boom, The Triumph of Righteousness, under sail. Photograph by Alan Villiers.

He can be more certain when he moves to the Mediterranean and Indian Ocean, where there is greater evidence of the various civilisations that flourished along the littoral and among the islands.
Even here he is occasionally left adrift on the tides of probability and possibility, such as when he speculates that goats would start to make awkward cargo on their second day at sea.

His explanation that trade flourished through “cabotage” – the practice of sailing along a coast from one inlet or harbour to another – is convincing, and he tells us of The Periplus of the Erythraean Sea, a 68-chapter description of coastlines around the Red Sea.
This sort of thing would have been handed down orally from father to son, a sort of mnemonic to guide a captain along unfamiliar shores.
In this way trade flourished, so mangrove poles grown in present-day Tanzania, say, might be traded from one town to another until they were matched with planks grown in India to make decent sailing boats.
None of this would have been easy without first having decoded the monsoon winds and their seasonal fluctuations.

It is not until he turns to the Atlantic Ocean and the men who braved her waters that he really faces up to what might impel a ship’s captain to turn west and just sail for day after day.
He mentions the Norse word æfintyr, which means venture, with the suggestion of risk, brought on by restless curiosity, but he makes the point that no one would just set sail without some object in mind, and that knowledge of the seas around Britain and Scandinavia and all the way to Iceland was arrived at incrementally over the centuries.
By this time boat building had advanced from dugout to the substantial cog that would take Columbus all the way across to the Americas, and throughout Fagan is fascinating on its development.

He is particularly keen on fibre lashings, as well as sail technology, and the book is peppered with enjoyable stories of his own adventures, as well as shaded boxes explaining sailing terms and techniques.
One gets the sense this is where his real interest lies, and the largely impenetrable reasoning behind early man’s first voyages is merely the peg on which to hang this brisk and erudite history of early boats.
It is, though, seasoned with a real love of sailing and a great respect for those who took to the waters without a functioning GPS or reliable diesel engine.