The pace of sea-level rise along much of the East Coast is accelerating three to four times faster than the worldwide average, a US Geological Survey study says. Global warming is the chief suspect.

The pace of sea-level rise along a swath of the US East Coast – from north of Boston down to North Carolina's Cape Hatteras – is accelerating three to four times faster than the worldwide average, according to a new study from the US Geological Survey (USGS), turning the region into a hot spot for sea-level rise.
At stake: the increased vulnerability of coastal communities to severe damage from storm surges or even high surf caused by storms off shore.

The prime suspect: global warming, through its direct effect on heating water at the ocean surface as well as the effect warmed seawater and air temperatures can have on speeding the pace at which Greenland is losing ice.
Warmer seawater in the North Atlantic and increasing amounts of fresh water from melting Greenland ice can slow ocean-circulation patterns in the ocean basin, which can trigger the accelerated rise, modeling studies have suggested.

This Aug. 2011 photo shows a flooded road on Hatteras Island, N.C., after Hurricane Irene swept through the area the previous day cutting the roadway in five locations.
From Cape Hatteras, N.C., to just north of Boston, sea levels are rising much faster than they are around the globe.
Jim R. Bounds/AP

Indeed, models indicated that the East Coast could develop such a sea-level hot spot – and in the location the new study identifies – because of these factors, explains Asbury Sallenger Jr., a research oceanographer who heads a USGS project to assess changes in the hazards that US coastal communities could face from climate change. 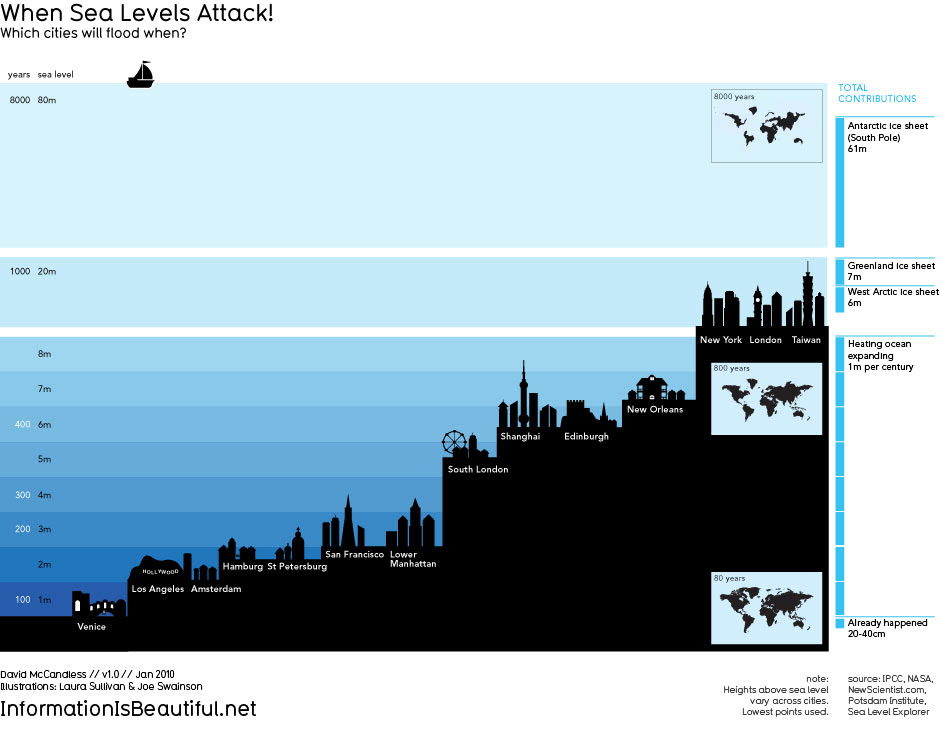 But earlier real-world measurements did not always support the theoretical models.
One study, published in May 2011, looked at more than a century's worth of tide-gauge measurements from around the US and globally.
The team not only found no US hot spot.
It found no acceleration of sea-level rise over the 20th century and into the first decade of the 21st.

The results triggered spirited debates as to why, in the face of other evidence to the contrary, the team came up dry.
If the warming the climate has experienced during the past century has triggered no rise in sea-levels, projections of future increases – already laced with uncertainties – would be heavily overstated at best.

Dr. Sallenger and two USGS colleagues decided to take their own look.

They used tide-gauge measurements from around the US coastlines spanning a 60-year period beginning in 1950.
They found that from 1950 through 2009, as global average sea levels rose at a pace of 0.59 millimeters a year, they rose 1.97 mm per year in the East Coast “hot spot.”
Between 1970 and 2009, the pace picked up, with global average sea levels rising 0.98 mm per year and the hot spot's pace increasing to 3.8 mm per year.

South of Cape Hatteras the pace shows no significant change for either time span.
North of Boston, the pace either was zero or slightly negative for the 1950-2009 period, but between 1970-2009, the rate rose into positive territory well into the Canada, Sallenger's team reports.

The results were "surprising, actually," Sallenger says.
"We found what we call a hot spot of acceleration. This is the only location within the country and a good chunk of North America where this kind of thing is happening."

The team posits that a key difference between its study and the one published in 2011 is that the 76 percent of the tide gauge data used in the previous study goes so far back – when little or nothing was happening – that they inadvertently skewed the results toward little or no change.
The results imply that New York City could see at least an extra 20- to 29-centimeter (7.9- to 11.4-inch) rise in sea levels by 2100 above the heightened global average at the time.

The last house on Holland Island, Maryland, where 360 people lived before tides took over
Photograph by Astrid Riecken for the Washington Post/Getty Images

The study by Sallenger's team, published Sunday in the journal Nature Climate Change, follows a report from the National Research Council projecting as much as a four to five foot rise in sea levels along the US West Coast by 2100.

That study, requested by the State of California to inform its adaptation plans, as well as the USGS study, underscore changes in local sea levels that global averages can mask.
The factors that can alter the local picture range from subsidence – as people draw down aquifers along the coast or as they drain and develop marshlands – to changes in the distribution of Earth's gravity as ice caps melt and add their water to the oceans.

Even Earth's restless tectonic plates get into the act.
The NRC study suggests that sea levels in the Pacific Northwest might fall slightly during the first part of this century relative to the coast because the land is being pushed upward by movement along the subduction zone marking the western edge of the Juan de Fuca plate offshore.
At least in the near-term, the uplift could outpace sea-level rise.

The US East Coast isn’t the only US coastline hosting a sea-level hot spot.
Southern Louisiana is another one, although for a different mix of reasons.
There, over the past century, sea level has risen at a pace of about 10 mm a year.
But sea-level rise, measured at Pensacola, Fla., is occurring at 1.65 mm a year, according to a recent study by researchers at Tulane University, at a location where the land isn't subsiding. Thus, for the Mississippi Delta the global-warming component to sea level rise, while important, has been outpaced by subsidence.

Along the East Coast's hot spot, by contrast, the team's measurements suggest that subsidence isn't a significant player in the acceleration it found.
The pace is most consistent with the slowing of Atlantic currents along the coast, either from warming waters, melting ice, or some combination, Sallenger says.

The take-home messages, he says: “Acceleration is indeed happening within the United States and can be seen in data,” and sea-level rise does not manifest itself the same way everywhere; it's not like filling a bathtub.

“Rather, it varies over regional scales,” he adds.