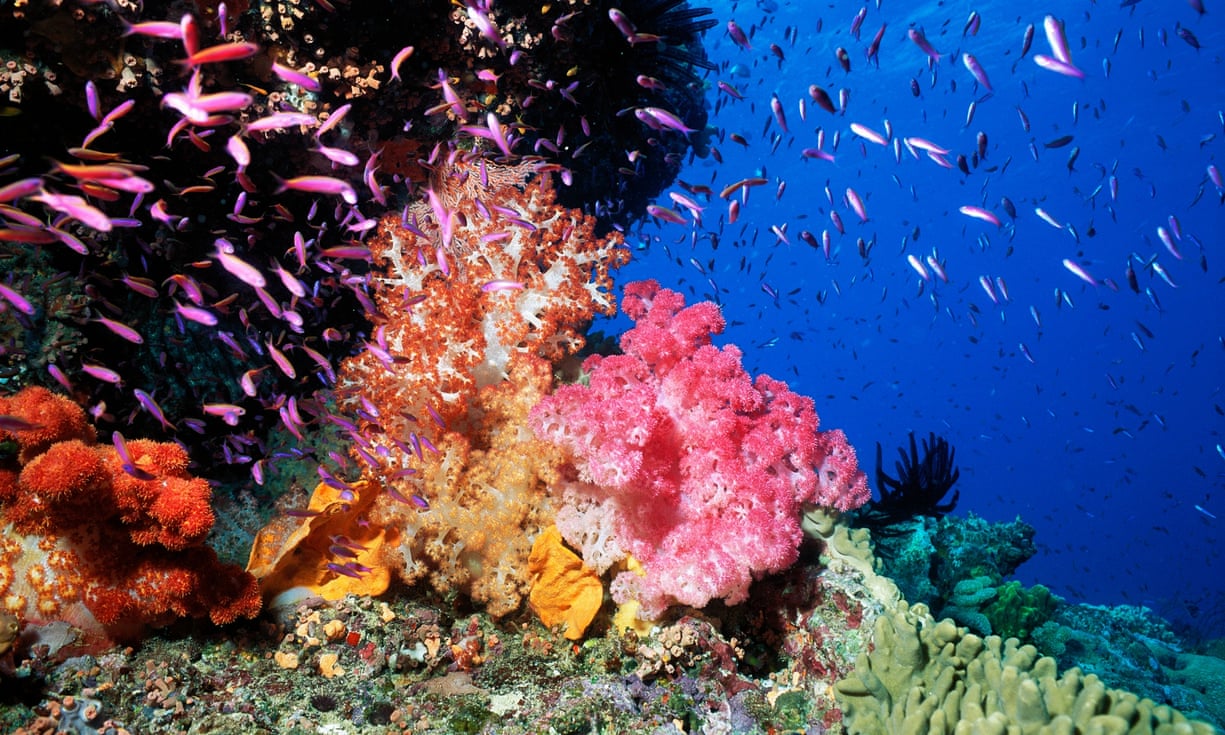 No 'Plan B' for oceans, says study
“The chemical echo of this century’s CO2 pollution will reverberate for thousands of years,” said the report’s co-author, Hans Joachim Schellnhuber
Photograph: Doug Perrine/Design Pics/Corbis

From The Guardian by Tim Radford

Researchers have demonstrated that even if a geoengineering solution to CO2 emissions could be found, it wouldn’t be enough to save the oceans

German researchers have demonstrated once again that the best way to limit climate change is to stop burning fossil fuels now.
In a “thought experiment” they tried another option: the future dramatic removal of huge volumes of carbon dioxide from the atmosphere.
This would, they concluded, return the atmosphere to the greenhouse gas concentrations that existed for most of human history – but it wouldn’t save the oceans.
That is, the oceans would stay warmer, and more acidic, for thousands of years, and the consequences for marine life could be catastrophic.
The research, published in Nature Climate Change today delivers yet another demonstration that there is so far no feasible “technofix” that would allow humans to go on mining and drilling for coal, oil and gas (known as the “business as usual” scenario), and then geoengineer a solution when climate change becomes calamitous.


Atmospheric concentrations of important long-lived greenhouse gases over the last 2,000 years. Increases since about 1750 are attributed to human activities in the industrial era, via Co2now.org

Sabine Mathesius (of the Helmholtz Centre for Ocean Research in Kiel and the Potsdam Institute for Climate Impact Research) and colleagues decided to model what could be done with an as-yet-unproven technology called carbon dioxide removal.
One example would be to grow huge numbers of trees, burn them, trap the carbon dioxide, compress it and bury it somewhere.
Nobody knows if this can be done, but Dr Mathesius and her fellow scientists didn’t worry about that.
They calculated that it might plausibly be possible to remove carbon dioxide from the atmosphere at the rate of 90bn tons a year.
This is twice what is spilled into the air from factory chimneys and motor exhausts right now.
The scientists hypothesized a world that went on burning fossil fuels at an accelerating rate – and then adopted an as-yet-unproven high technology carbon dioxide removal technique.
“Interestingly, it turns out that after ‘business as usual’ until 2150, even taking such enormous amounts of CO2 from the atmosphere wouldn’t help the deep ocean that much - after the acidified water has been transported by large-scale ocean circulation to great depths, it is out of reach for many centuries, no matter how much CO2 is removed from the atmosphere,” said a co-author, Ken Caldeira, who is normally based at the Carnegie Institution in the US.

The oceans cover 70% of the globe.
By 2500, ocean surface temperatures would have increased by 5C and the chemistry of the ocean waters would have shifted towards levels of acidity that would make it difficult for fish and shellfish to flourish.
Warmer waters hold less dissolved oxygen.
Ocean currents, too, would probably change.

But while change happens in the atmosphere over tens of years, change in the ocean surface takes centuries, and in the deep oceans, millennia.
So even if atmospheric temperatures were restored to pre-Industrial Revolution levels, the oceans would continue to experience climatic catastrophe.
“In the deep ocean, the chemical echo of this century’s CO2 pollution will reverberate for thousands of years,” said co-author Hans Joachim Schellnhuber, who directs the Potsdam Institute.
“If we do not implement emissions reductions measures in line with the 2C target in time, we will not be able to preserve ocean life as we know it.”