What does the age of the survey mean for nautical charts?

Alaska’s nautical charts need to be updated — we all know that.
The diagram below shows the vintage of survey data currently used for today’s charts in Alaska.
The graphic includes all surveys done by NOAA’s Office of Coast Survey (and its predecessors), and some limited data acquired by other agencies, i.e., the U.S. Coast Guard.
Areas that are not colored in have never been surveyed or have data acquired by another source — from Russia or Japan, for instance — before the U.S. was responsible for charting in that area.

Nautical charts have a lot of information, but mariners especially are concerned with two major components: water depths (known as “soundings”) and obstructions (like underwater seamounts or wrecks).
Different eras used different technologies to find, measure, and determine the position of the two components.
Note that adoption of new systems does not happen abruptly; rather, new technologies are phased in as techniques and equipment improves.

3.7 million years ago to present day: sounding pole
It isn’t inconceivable that the earliest humanoid, Australopithecus afarensis, used sticks to gauge water depths before crossing streams and rivers.
People still do it today.

Note the ancient Egyptian on the far right, using a sounding pole.

As good as they were for their eras, 19th and 20th century surveyors faced technological challenges. The first challenge was accounting for gaps between depth measurements.
The second was the inability to be totally accurate in noting the position of the measurement.
(In other words, a specific location out in the ocean may be 50 feet deep, but a surveyor must also accurately note the position of that specific location.)

This surveyor is casting a lead line.

Early Coast Survey hydrographers measured depths by lead lines — ropes with lead on one end — that were lowered into the water and read manually.
Even though soundings were generally accurate, coverage between single soundings was lacking. And we need to remember that this was before the age of GPS.
While sextants gave accurate positions when a hydrographer could fix on a shoreline feature, the further offshore the survey, the less accurate the position.

(Interesting fact: Hydrographers still use lead lines occasionally, in some circumstances — but not for a complete survey.)
There have been variations on lead lines through the centuries.
From 1492 to the late 1870s, for instance, mariners used hemp rope for deep-sea soundings.

(Interesting fact: Christopher Columbus and Ferdinand Magellan each tried to measure mid-ocean depths with about 1,200 feet of hemp rope. Neither one of them found the sea bottom.)
In 1872, the hemp was replaced by small diameter piano wire (again, primarily for deep-sea work), and the weight of the lead was increased.
Later, hydrographers added a motorized drum to wind and unwind the line, with a dial to record the length of the line.

(Interesting fact: In 1950, the British ship Challenger used piano wire in the first sounding that established Mariana Trench as the deepest place on earth.)

Compare the bottom coverage achieved by the different survey methods.

Sonar came into its own in 1913.
The first echo sounders (also known as “fathometers”) had single beams that measured the distance of the sea floor directly below a vessel.
The echo sounders were able to take many more depth measurements than was possible with the lead line, but the technique still resulted in gaps between the lines where the beam measured the water depth.
The U.S. Coast and Geodetic Survey (a NOAA predecessor agency) adopted this acoustic sounding technique in 1923, installing it on USCGS Ship Guide.
But full-fledged change didn’t happen right away.
These early sounding systems were too large to install on survey launches used in harbor and inshore work, so from 1924 until the early 1940s many surveys were still conducted with a lead line, and many were totally acoustic — and some were hybrid, using soundings from both methods, depending on coverage area and seafloor configuration.
→ 1940: U.S. Coast and Geodetic Survey fully adopts single beam echo sounding technology
The development of smaller “portable” fathometers for shallow waters, about 1940, was a primary impetus in the obsolescence of lead line as survey technology and the adoption of acoustic systems.
The development of World War II electronic navigation systems for bombing purposes led to the development in 1945 of the first survey-quality electronic navigation systems, which allowed for more accuracy in positioning.

By mid-century, scientists were increasing the beams projected by the echo sounder, to get a broader swath of measurements.
The multibeam echo sounder was developed for the Navy in 1964, but it remained secret until the late 1970s when commercially available systems were developed.
Coast Survey first used a MBES technique, called the “Bathymetric Swath Survey System,” in 1977 on NOAA Ship Davidson, for depths ranging from 160 to 2,000 feet.
In 1980, NOAA Ship Surveyor installed a deep-water MBES system called “Sea Beam,” for depths from 1,600 to 33,000 feet.
About 1986, Coast Survey began using GPS to calibrate medium-frequency navigation systems while operating in the far reaches of the United States Exclusive Economic Zone.
By the mid-1990s, GPS was the primary control for accurate positioning.
→ 2000: Coast Survey fully adopts multibeam surveying
By 2000, Coast Survey was performing full-coverage multibeam hydrographic surveys for charting purposes.
NOAA survey ships now use multibeam echo sounders that measure navigable coastal depths from 45 to 1,000 feet.
For shallower and more constricted waters, the ships deploy hydrographic survey launches with multibeam echo sounders that efficiently and safely survey areas from 12 to 200 feet deep.
These systems make it possible to acquire 100% sea floor coverage in the survey grounds (excluding ultra-shallow, near-shore, or obstruction areas).

Surveyors used wire drag, not as a sounding system but as a way to look between the sounding lines to find obstructions to navigation and establish safe navigational channels.
The first documented wire drag was conducted in the 1880s, in French Indochina, Gulf of Tonkin area, attaching the wire to buoys at each end and letting it drift with tidal currents.
Around 1900, the U. S. Lake Survey developed the technique of using a ¼-mile wire drag between two boats.
In 1903, Coast Survey began using the technique, and within a few years was using it extensively in Alaskan waters as they looked for pinnacle rocks.
Coast Survey’s Alaska wire drags were up to 3.5 miles long.
(Initially, “least depths” over discovered obstructions were determined by lead line, then acoustic means and, ultimately, by divers with depth/pressure gauges.)

Side scan sonar is essentially the sonar equivalent of an aerial photograph.
It improves the ability to identify submerged wrecks and obstructions.
Evolving from submarine detection sonars of World War I and World War II, side scan sonar was fairly well developed by 1960, when the United Kingdom Hydrographic Office started using it regularly with their surveys.
→ 1990: Coast Survey fully adopts side scan sonar for East Coast and Gulf Coast surveys
NOAA Ship Whiting used the technology in 1984-1985 for approaches to New York. U.S. Coast Survey fully adopted side scan sonar (in place of wire drag) in the early 1990s.

Side scan sonar operations use “towfish” like this one, lowered into the water and towed from the back of the vessel.

Side scan sonar captures images of objects, which improves the ability to identify submerged objects.

Each of NOAA’s 1000-plus nautical charts, even today, can contain information collected by any or all of these sounding and positioning techniques.
Most nautical charts are an amalgamation of geospatial information collected using different techniques at different times.
For example, one area of a specific current-day nautical chart might be based on a lead line and sextant survey conducted in 1910, and another area on the same chart might be based on a multibeam and GPS survey conducted in 2010.
If we dig deep enough, we will probably find a sounding or two from the 18th century British explorer, Captain James Cook.
NOAA cartographers mold this disparate information so that it fits together as a coherent representation of the geographic area.
So when was the data acquired for the chart you’re using?
NOAA cartographers add a “source diagram” to large-scale charts.
(See the diagram on the current chart 16240, pictured below.)
Check yours.
That will give you the years of the surveys… and now you have a better idea on the technology used by the surveyor.

This is the source diagram on nautical chart 16240. 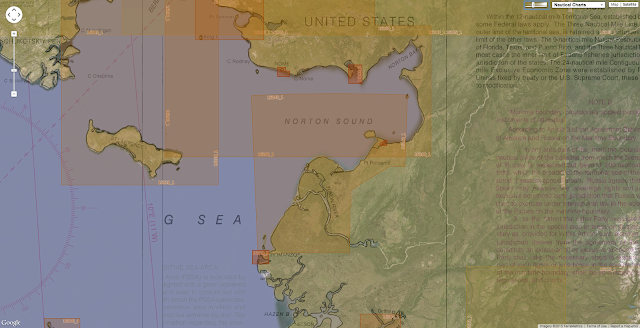 16240 chart in the GeoGarage platform

Posted by geogarage at 1:55 PM